There I was. Wandering the aisles of Dollarama like I do most weeks when a grin as wide as a photoshopped thigh gap spread across my face.

I had gone for a spray bottle, but left with 3 bags of artificial grass.  I'm sure you've seen them there before.  They're just squares of fake grass or moss.  They're pretty ugly really and I'd always wondered who would buy them and WHY.  Turns out the answer to that question is me and because it was exactly what I needed.

I had been looking for something for a specific area in my backyard for weeks and nothing was right.

This. Would. Be. Right.  Yup.  Ugly is apparently what I was looking for. Who knew.

I danced my way up to the cash thinking this day couldn't get any better.  Then, while checking out with my favourite Dollarama cashier, she grabbed some clothing from under the counter and handed it to the manager saying she'd found it in the craft aisle.  Someone took their clothes off in the craft aisle?, I asked.  Oh yes, she said.  And this wasn't the first time.  People do it all the time. She then went on to tell me all the stories about the Dollarama customers who disrobed and the one woman who left her coat and car keys in the store never to return for them.  To this day, no one knows how Chilly got home that night.

So clearly, the day got even better.  Plus I bought chips and was better dressed than everyone else in the store because I had my good pajamas on.  So ...

For the rest of this week I'm going to show you the 3 projects I accomplished with my 3 bags of fake grass squares.

The first project I'm going to show you is the one that I KNEW I was going to use the squares for.

My Ikea patio table outside is great. I love it with all of my heart.  It's big and comfortable and feels more like a dining room table than a patio table.  But it was looking a little blank.

I tried a bunch of different things on it and it just wasn't looking good.  Ferns were too high, the neighbour's tricycle just looked stupid and  leaving it bare made the table look oh so lonely.  Like it was never going to have someone sit and eat at it ever.

Dressing it up like a real indoor table wasn't working because well ... this table was outside.  There had to be some sort of compromise or combination of inside meets outside. 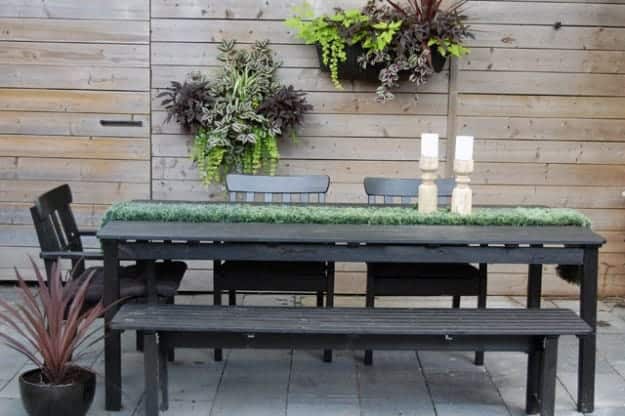 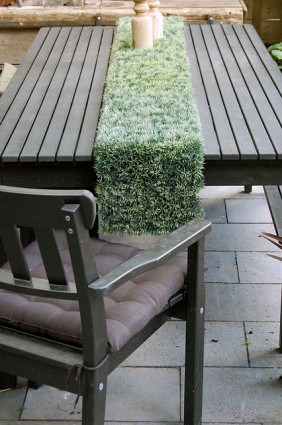 I could have made a real grass table runner with a length of sod and it would have looked GREAT for a picture, but it would have looked like crap in about 3 days.  BUT if you're having a party and you have a long table like this a roll or two of sod down the middle would be FANTASTIC.

The dollar store fake grass squares come with little nubs on the edges so you can actually attach them together so you don't have to worry about them shifting or pulling apart.

The squares were $2 each which made this table runner $24 to make.  It works especially well in my contemporary backyard, especially because the other side of the yard has a large artificial turf rug. 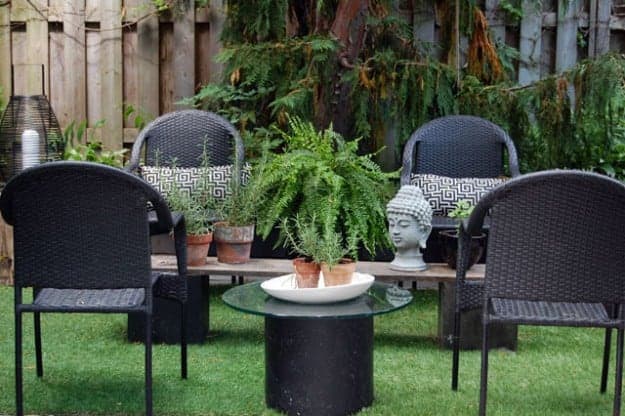 Now where did my shorts get to?  I'm almost sure I was wearing some when I left the store.