Home » My Life » Philip the Poodle » The First Week With My New Puppy.

The First Week With My New Puppy.

I have a puppy. Holy crap.  He’s so much harder to take care of than sourdough starter.  And yet – nobody mentioned that. Not a single person I told said, “You know it’s gonna be harder than raising sourdough starter don’t you? ” What the hell, people?!

Listen, before we even get into this post with its assortment of terrible, blurry pictures of the 8 week old puppy, I have to wonder out loud – why didn’t I get something easier to take care of? Like a soufflé. Or 17 babies.

At least when you bring a brand new baby home it just lays there. Yeah, it might scream for extended periods of time but you can eliminate that problem with a $2 set of earplugs and some Gin.

Speaking of elimination, were you aware that a puppy needs to eliminate every hour? Or maybe he doesn’t. 🤷‍♀️ It’s a game of risk … and chance! Will he go? Or won’t he? You could roll the dice and wait 2 minutes until you yourself have finished peeing while being stared at by a dog to take him out, but then you run the risk of having two messes to clean up.

Again. WHY people, why?? Just a little nudge and – Hey, remember that time you always kill your sourdough starter?

The First Week With a new Puppy

Is completely exhausting. There’s no time to get showered or groceries and definitely no working. Your time is divided between making sure it only eats inside the house and only poops outside of it.

When I first started thinking about getting a dog a couple of years ago, I imagined me and my pup creating beautiful portraits together. Me behind the lens, he standing regally, staring directly into the camera with a certain glint in his eye evoking the spirit of his mentor Tyra Banks.

The reality of portrait taking with your new puppy evokes something a little more avant garde than your standard Vogue shoot.

You are not on mushrooms. These are the portrait shots of my dog …

I’m quite proud of this one. I was taking a photo of his face. Yes, it’s his ass, but it’s *almost* in focus. A soufflé on the other hand will certainly move during a photoshoot, but in general is much better behaved.

Have I mentioned I ate a fistful of dog kibble by accident?

It is the Pavlovian response in reverse.

Near the end of the week I sat at my computer with the treat pouch on my lap, the dog at my side and a small bowl of mixed nuts beside my laptop.

I don’t think I need to explain it any more than that but I would like to say that the treats were surprisingly fishy.

I’d like to really hammer down on the fact that I didn’t just put the nut sized handful of treats in my mouth and spit them out. I chewed them. Crunch, crunch, crunch. Yup, this makes sense – nuts are crunchy, deduced my brain.

But they’re not fishy.

Not wanting to waste food and feeling moderately irrational after the shock of it, I walked over to the dog’s food bowl and spat the partially chewed treats in. I felt like a seagull feeding her young.

Oh. I didn’t mention that? I thought I had. K. Moving on.

I can’t say for sure, but from what I remember upon waking up from a terror faint, this was the exact moment he got the Zoomies for the first time.

We were outside for another supermodel photoshoot. The above photo is a very accurate representation of how that went for us.

The Zoomies last from approximately 6 – 7 p.m. and involve chasing imaginary scary things, biting the air, biting my pants, biting my feet, biting while doing somersaults, and generally terrorizing anything in his path.

That’s right. Between 6 and 7 he becomes a predator land shark who trained with Cirque de Soleil at some point.

This is another shot from the Zoomie photoshoot. That’s a leg. I believe. If I gave this one above a zippy title I could probably sell it to one of the more forward thinking art galleries.

In this next shot I came very close to photographing almost half of him.

In the end, over the course of 3 weeks I got one photo that I could use for identification purposes on a flyer if I had to. If, say, my puppy was carried off by a gaggle of little girls wanting to smooch and dress him up like Ariana Grande.

If you’re fan of the show Shameless you probably instantly recognize the name Lip. That’s exactly where my new puppy’s name came from after a long list and several days of being called STOP THAT, You’re so cuteeee, Hi Puppy! and OMG that reeks.

I didn’t really want a human name for him but he ended up being Philip with the nickname Lip because it felt right. The same way saving a large handful of potato chips at the bottom of the bag so you can eat them tomorrow as a snack at 4 o’clock feels right.

I’ll continue trying to get a good photo of him. Maybe one where he’s actually looking at me for instance. I could take one while he’s sleeping but that feels like cheating. Also it would be a terrible photo because being black, when he sleeps he just looks like a hairy snow tire.

Over the next 2 years his coat will clear from black to blue. I’ll explain more about what a “blue” poodle is in my next post on Philip.

Philip’s breeder ultimately selected him for me based on his personality and temperament. Aside from the Zoomies every night he’s the calmest, nicest puppy I’ve come across.

After being home one week he could sit, lay down (with luring), wait and walk at my side.

And he requires a lot less feeding than sourdough starter. 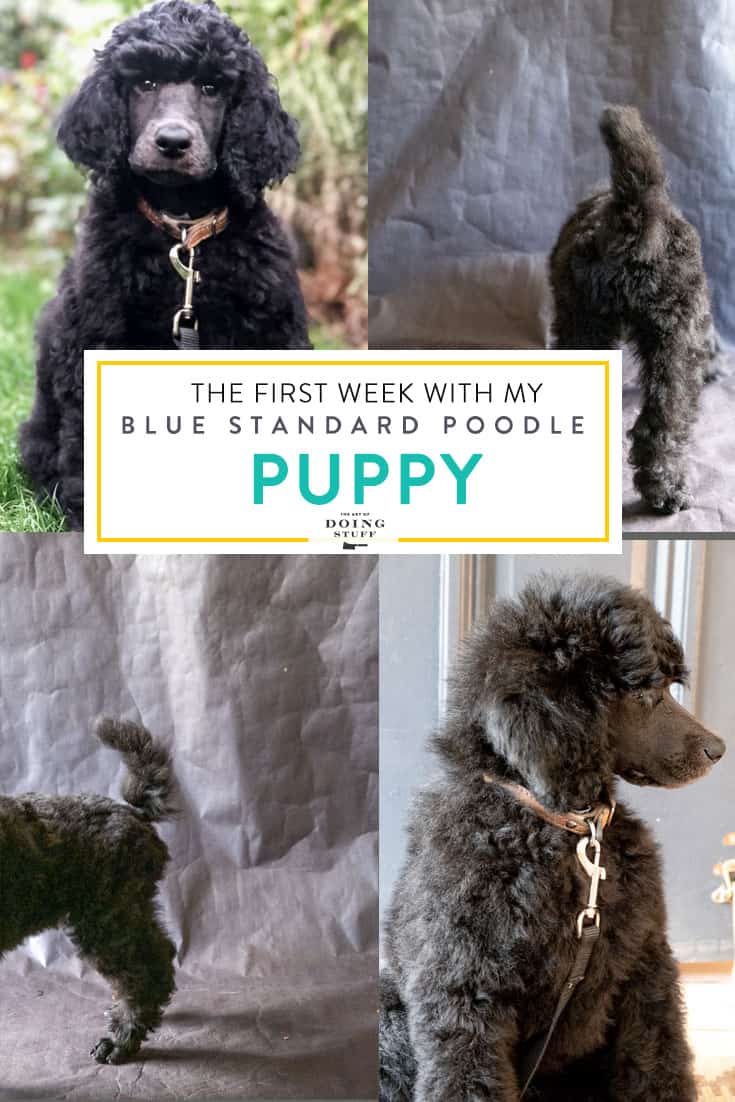