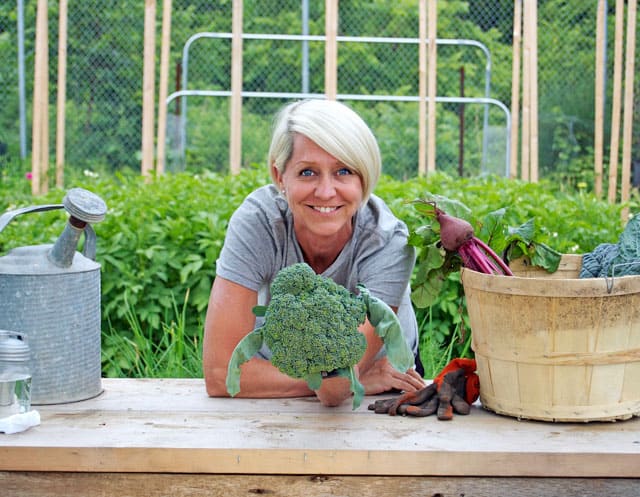 Welcome to my garden.  This post isn't for you fancy people who buy your broccoli in the store like some sort of aristocrat.  It's for the rest of us. The common folk who grow our own broccoli, realize it has green caterpillars in it, wash it several times, attempt to consider eating it, throat gag,  throw it out, THEN go to the grocery store to buy broccoli.

Living like an 17th century peasant isn't always fun and fabulous. Sometimes it's scurvy and scabies.

But let's forget about the cabbage worm problem for now and talk about the things you can do to make your garden a) easier to use b) more productive and c) cheaper to maintain. 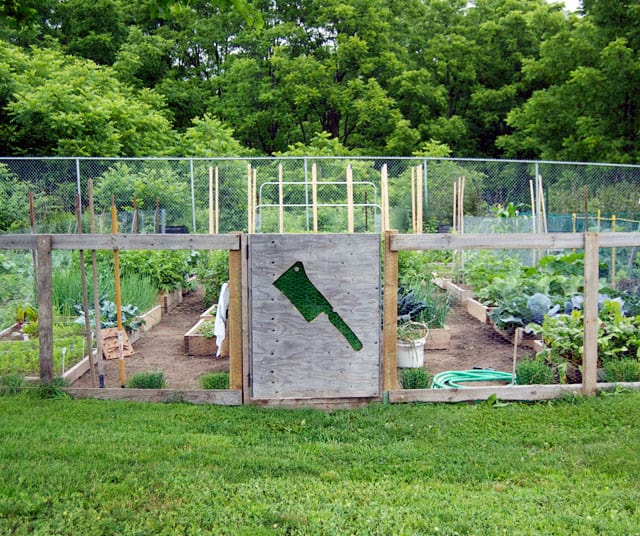 The first thing I want to say to anyone who is thinking of creating a vegetable garden or changing the one they already have is, just because it's a garden doesn't mean it has to look like a complete disaster.  Design and digging can go hand in (gardening gloved) hand.  I mean, it's a garden and it's filled with bugs and dirt but that's no reason to let all design sensibilities go out the window if design is your thing.  If it isn't ... then don't worry about how good it looks no matter what pictures Pinterest assaults you with.

I wanted a good balance between design and function and it all starts with the gate.  I used a jigsaw to cut my logo out of the plywood board, then put chickenwire behind it.  It looked good in real life, but when it came to photos the cleaver just sort of disappeared. One of the other gardeners even went so far as to grab a piece of orange plastic fencing to put it behind.  He loved my gate but didn't think it was quite up to par for me.  I agreed.  But wasn't sold on the construction site orange fencing.  So I went to my favourite store, the dollar store, and bought some squares of astroturf and stuck them behind the cleaver.  Perfect.

My garden is the place I go to for quiet and calm.  It's where I don't have to think about  a single thing and can focus on mindless, repetitive tasks like weeding and dating Idris Elba in my mind.  Last year my community garden was O.K. It was a bit of a gardeney mess but it didn't bother me quite as much as I thought it would.  Still ... I had a bit more time this year to devote to actually making it look and function the way I really wanted it to.  What I didn't have was a ton of money to spend on it.

So how did I build all the raised beds for only $25?  I scrounged.  I went to dumpsters at construction sites, used old wood I had from around the house, got some from my sister who is renovating but most importantly .... your biggest tip here ... is  bought wood from the lumber yard that they couldn't sell because it was either discoloured or warped.

Lumber yards almost give away their "culled" wood.  The wood they can't sell.  Now, some of my raised beds are a bit wonky of course, but I can deal with that.  None of the beds match and are all made up of a mismash of wood but they're functional and building them for cheap makes me happier than seeing them straight would.

My fence was also made from scrounged wood.  It's made from broken up skids and  old fence boards that my local feed store had in their garbage pile.  Yes, I know.  Not everyone has a feed store to scrounge at, but construction sites and dumpsters are everywhere.  You can get wood there. 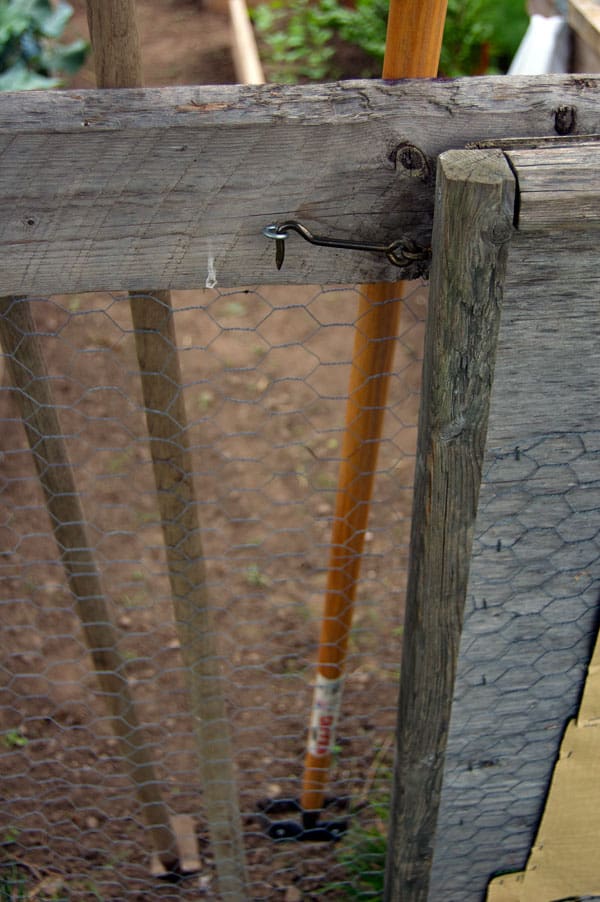 The only new wood I had to buy (which isn't included in the $25) were the tomato stakes, which I bought tall enough (8') so that as they rot in the ground over the years I can just cut the rotted ends off and continue to use the stakes.

Then there's the garden table I made which is  probably the number one thing I would recommend to anyone who is creating a vegetable garden; big or small.  Make. A. Garden. Table.  Or buy one, whichever makes more sense for you.

I had to buy the 4'x4's for the legs, but the rest of it is made from broken down skids.  Even the super-thick top!  It was donated to me by another gardener who works in a business that gets MASSIVE strong skids. 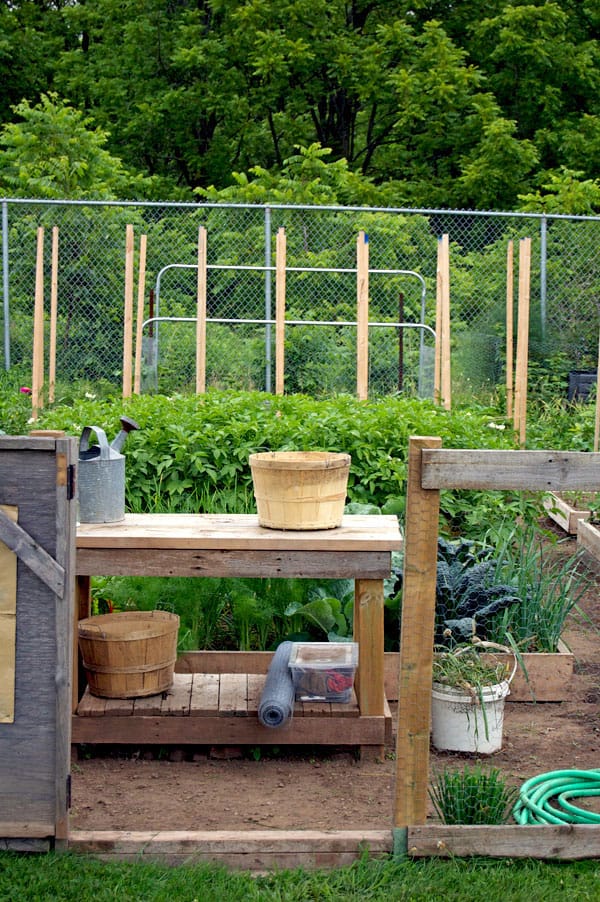 Kind of like the kitchen table, the garden table is where it all goes down.  I keep my mason jar of water there all season long and just empty, rinse, and refill it.  I have baskets (also free thanks to local store Picone's Fine Foods) on the shelf below for carrying produce home, a watering can for when I can't be bothered to drag the hose, a hook for my purse or jacket, a tea towel for drying off my hands and a Rubbermaid bin for storing extra seeds, garden gloves, a hammer, and a bunch of other stuff.

This table has made my gardening life WAY easier.  Idris and I smile about it all the time. 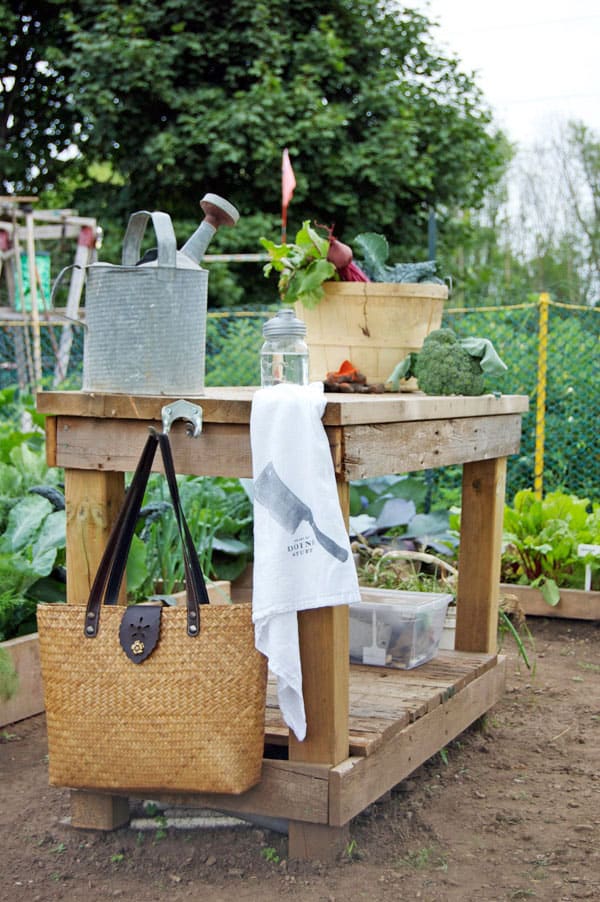 The garden dibber.  I also made this.  It's a hunk of wood with holes drilled into it and dowels inserted.  One side has 16 dowel and the other side has 9.  When I want to plant something I just press it into soil and all my holes are perfectly even. 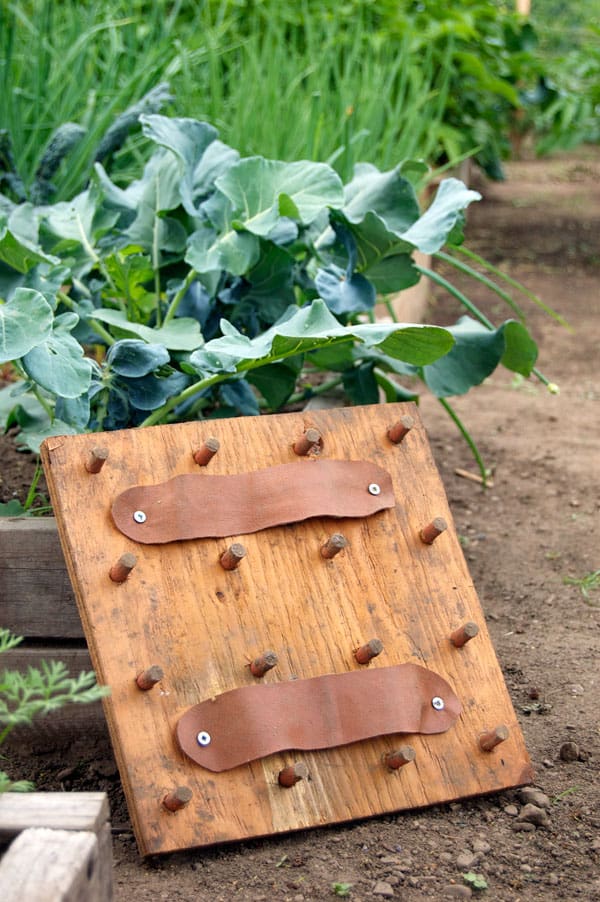 I've gone nuts on occasion and bought vegetable tags at the dollar store, but when I run out of those I just write the name of the vegetable or variety on a rock with a Sharpie.  It works great, doesn't wash off in the rain and looks cute. 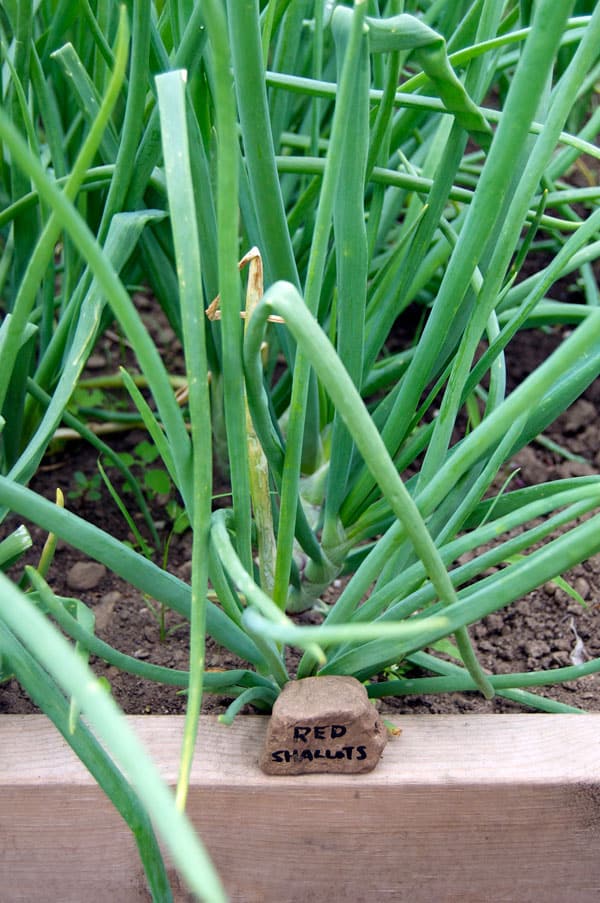 And here's a tip.  Starting your plants indoors isn't always the right thing to do. I got ahead of myself this season and started some Eureka pickling cucumber seeds too early. They were so used to being indoors that once they got outside they revolted and just wouldn't grow. They go into vegetable shock.  Then there was that slight frost which they didn't take kindly to either.  It didn't kill them but it sure angered them.

I finally gave up on them becoming anything and planted more seeds in June. 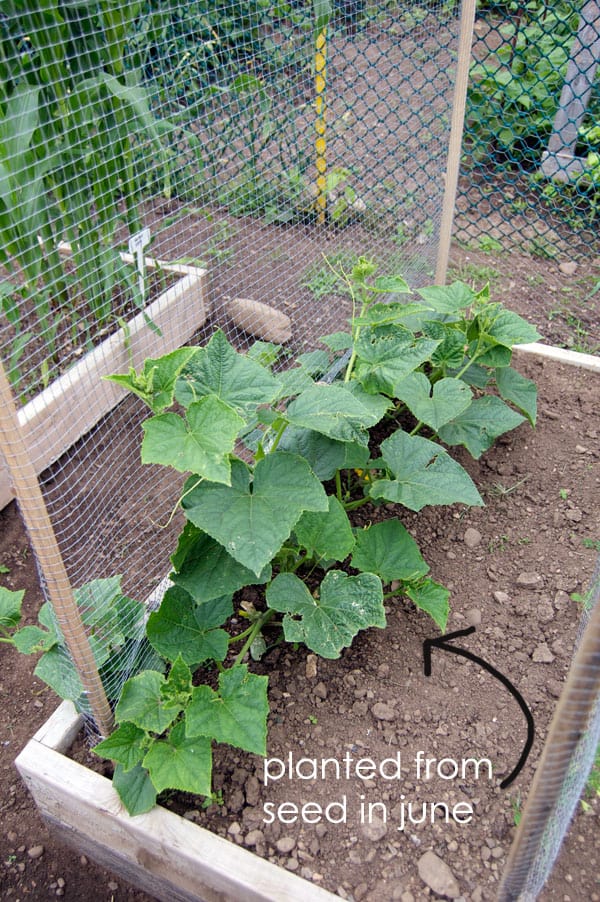 I've left them in the ground just to see what happens to them, but as you can see they're pretty much pathetic.  The seeds I planted in June are now almost 3' tall and thriving. The ones I started too early indoors and didn't protect from a light frost?  They're about 8" tall.  That hardware cloth for the cucumbers to grow up is actually plastic hardware cloth.  It's way easier to deal with and is strong enough for things like cucumbers or peas. 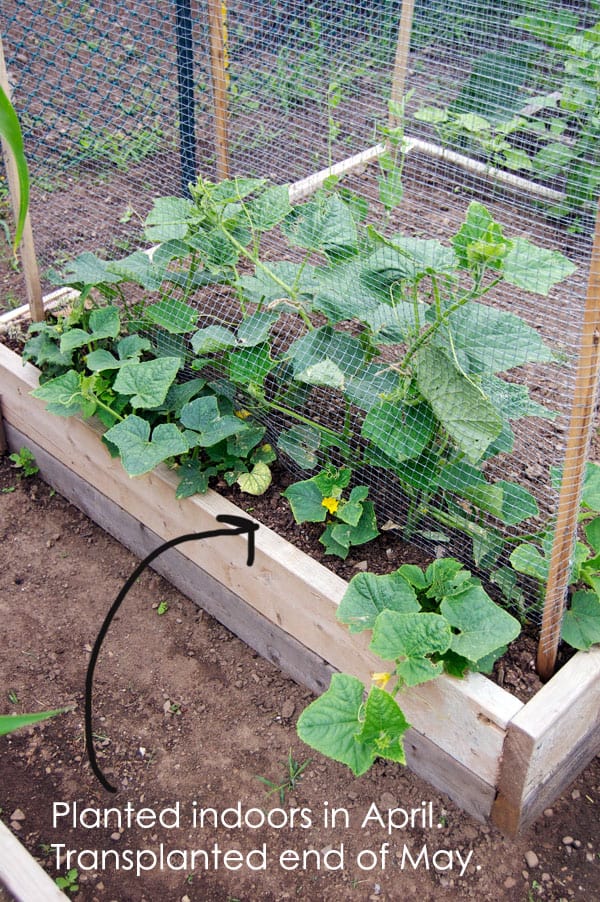 This corn on the other hand? That's another story. The huge stuff in the corner is the Glass Gem corn I told you I was going to plant. I started it inside and transplanted it very successfully. 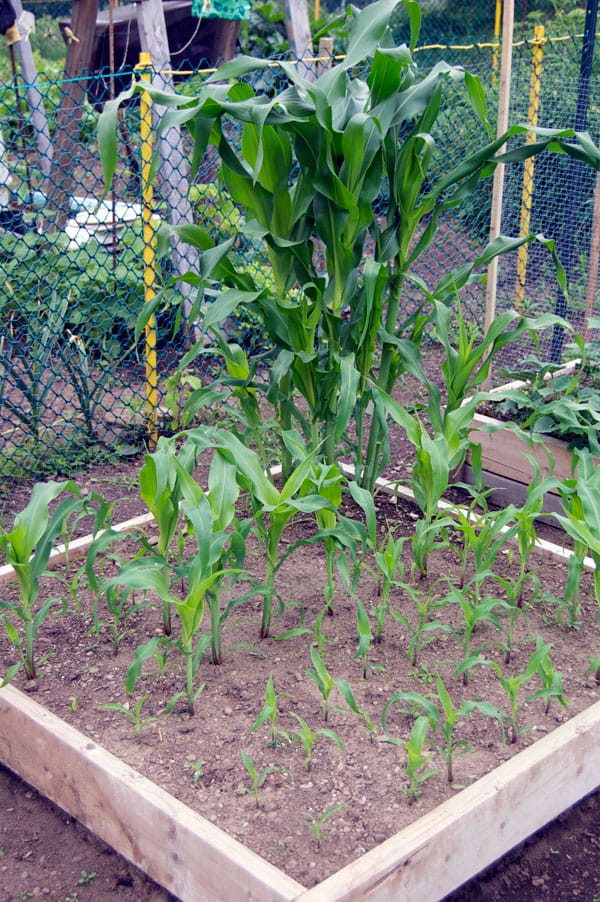 Speaking of broccoli, that's it over there by the compost bin. I did my best to keep the pests off of it (and by that I mean I ran around my garden chasing the offending cabbage moth, never once catching one).  Cabbage moths were BAD this year for me.

Cabbage moths are the white moths with a single black spot on their wings that flit around crazily like they're on an acid trip.  They lay eggs on brassicas  like cauliflower, cabbage, and broccoli as well as kale.  Black (dinosaur) kale is a specific favourite of theirs.  Once the eggs hatch, they turn into little green caterpillars that not only eat your vegetable, more alarmingly, blend in with it.  So your head of broccoli which might look pretty darn good, is actually teaming with caterpillars the exact colour as the broccoli.

I love my garden and the vegetables I grow in it but I'm not such a freak show that I'm about to eat wormy broccoli out of it.  So this year the chickens got that broccoli.  Technically you can soak anything you think has bugs on it in your sink filled with cold water and a handful of salt to draw the bugs out, but you know what?  I did that 5 times with the broccoli and worms kept coming out.  That's where I draw the line.  Idris doesn't like it either so there's that.

NEXT year I'll be using row covers.  Something thin that won't change the temperature underneath too much.  Just something to keep the moths out.  To try and save my beloved black kale this year I'm going to pull off the worst of the leaves, pick off all the eggs and caterpillars I can see then spray it with BTK.  BTK turns the inside of this particular type of caterpillar to juice and kills it.  It doesn't harm other insects and is approved for organic use (although some organic farmers don't like to use it).  This is an emergency though.  I mean this is my beloved black kale.

Once I've done all that I'll throw a row cover over it and hope for the best. 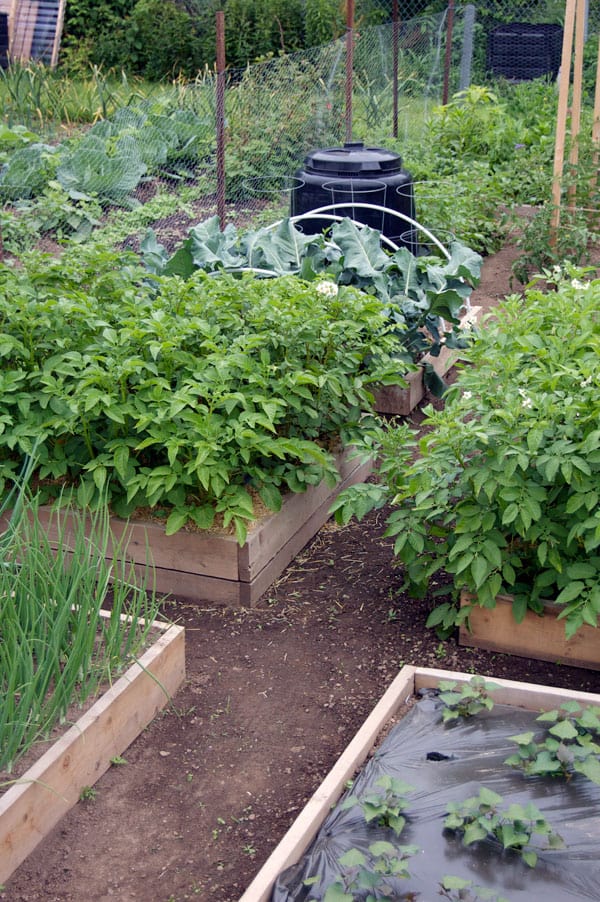 Luckily I'll have a second chance with my broccoli.  Because ... in case you didn't know, if you cut your first head of broccoli off instead of pulling the whole plant up, it will grow a few more small crowns for you.  Very small, but still good for dinner.  THESE little crowns are going to be wrapped with nylon or row cover as soon as I'm done writing this post.

Cabbage will also grow a few more little heads for you.  Just cut the main cabbage off and then you'll have 3 or so of the cutest little cabbages you've ever seen.  They're the perfect size for braising and eating whole as a side dish. 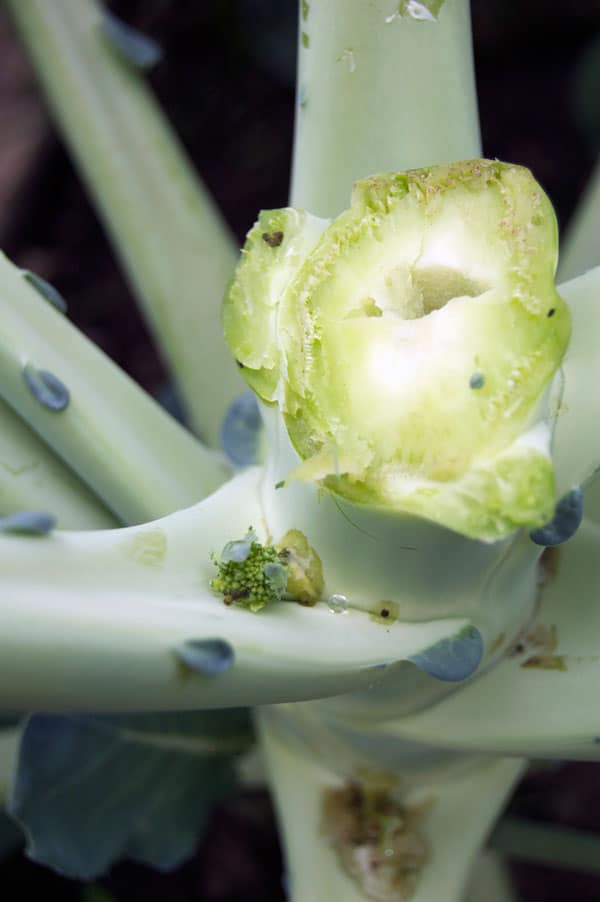 Another indispensable thing to the modern garden is a lawn chair. Where the hell else am I supposed to sit and text? 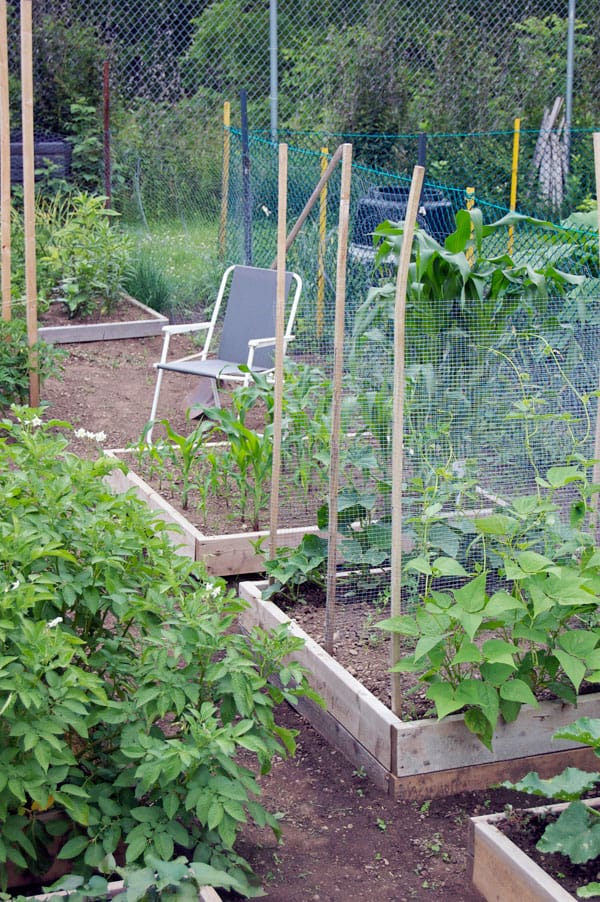 It's the middle of July and my cauliflower and broccoli are all done.  Once I pull them out (after gathering my mini broccolis) I'll add some compost to give back the nutrients the previous plants sucked up, rake out the soil and plant radishes and lettuce for a fall crop.  If you want to do this make sure you use a spot in your garden that's shaded from afternoon sun because radishes and lettuce don't like sun and heat.  They are the vampires of the vegetable world.   Planting them within bushy crops where the leaves will shade them is a good place to consider.

Do you have a garden you're proud of?  Send me a photo and it might be featured in an upcoming post on reader's gardens!  Send photos to karen@theartofdoingstuff.com with a 1 sentence explanation of it.

(update:  sorry, but the vegetable garden show off post is done)