Exactly 3 years ago today I was huddled in a closet wondering why this wasn't a thing.  Why more people didn't huddle in closets.  That's where my sisters found me several hours after the fella ran away from home.  He literally ran away from home, like a child, or a caged bird, or a 6' 3" doucheyishbag.  (at the time I would have referred to him as a douchebag, but now ... meh ... whatever, doucheyish is fine)  He tells people he's 6' 4" for some reason which is a lie, by the way.  He's 6' 3".  So, basically a munchkin pygmy.

He left, I broke down, and immediately made my closet floor my new best friend.   I walked straight in there, shut the door and laid down for what I assumed would be the next 4 years or so.  I should mention it isn't really a walk in closet, let alone a lay down closet. More the kind of closet you'd find in a house where you'd say "Oh my GOD, this is all the closet space there is??" and then you'd storm out of the open house and complain to your realtor.

My sisters got wind that after 11 years, the fella had gone on permanent walkabout so they rushed over to see if I was O.K.  Me?  O.K?  Yup.  I'm good. I'm in a closet.  Why people reserved this sort of indulgence for natural disasters and World Wars was beyond me.  Huddling in a closet was GREAT.

Thinking back on it I feel kind of bad for my sisters, opening the closet door to see me on the tile floor with the imprint of a knock-off Chanel bootie on my forehead.

For some reason this really alarmed them.

I'm not sure why because I know for a fact they both own closets and have both been in their own closets.  I was just being in mine a little bit longer than normal.  Plus I was on the ground. Plus the door was closed.  Plus my hair was all crazy messy from rubbing against the sleeves of a velvet jacket I had in there.  Also,  I may have wrapped a tunic from the late 1990's around part of my head like a turban for some reason.  I liked it in there. It was great. There was no sound and no light.  My own private sensory deprivation chamber. Perfect. In 4 years time I'd reemerge, with luxuriously long hair, beautifully pale skin and no memory of whats-his-name.

I was really excited about this plan because for the life of me I couldn't see a single flaw with it.

So why they insisted I get out of the closet I still don't know.  At first they tried to drag me out which I can tell you right now I was not impressed with.  They weren't successful of course, because the piles of shoes surrounding me were acting like speed bumps plus my hair was a little bit velcroed to the velvet jacket.  But they didn't give up. They really wanted me out. Suddenly laying in the closet with my tunic/turban amongst a pile of wire hangers with shoe prints on my face seemed almost humiliating.  I mean,  just moments before I was thinking I could maybe market my closet chamber, for long term financial gain if I could just get one of the Shark Tank people involved. And now my sisters were acting like it was crazy.  Like I was crazy.  They were getting seriously close to being on my doucheyishbag list.

Then the one sister yelled at the other sister for trying to drag me out of the closet and they started sort of windmill slapping at each other, at which point I burrowed deeper into the shoes. 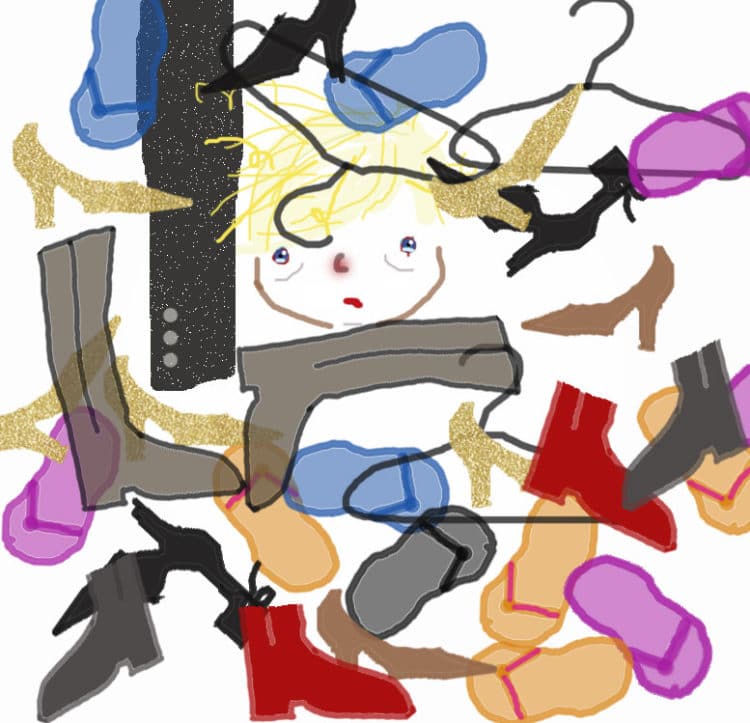 I eventually came out just to shut them up.  Plus my one sister had brought yogurt and honey because she figured I might need sustenance.  Having your spouse up and leave without warning immediately makes people around you think you'll no longer be able to feed yourself beyond eating your own hair. So they bring food, the same way they would if there was a death in the family.  It was a sudden and surprising "death" at that by the way.  Where you have no warning and aren't expecting to be hurt at all.  Like a heart attack, or being trampled to death by a herd of kittens.

I was out of the closet, I ate yogurt and honey, and I reluctantly took my super-cool, protective turban off.  They still weren't happy. They wouldn't leave.  I asked them to please leave.  I begged them to leave. I just wanted to be alone with my shoes, my snotty face  and my super-plausible Shark Tank fantasy.  I guess they thought GO AWAY  was "just-been-dumped code" for please don't leave, because instead of packing up their stuff and heading out the door they started cleaning my house. Everything. All of it.  Like Molly Maids with a never-ending supply of tee shirt rags, wood polish and cocaine.

My sensory deprivation chamber was now replaced with the sound of ripping paper towels and my one sister screaming at the fella on the phone from downstairs.  Which I liked of course.  She was giving him shit. His life would be shit, he treated me like shit, he was just a big pile of 6'3" shit.  That part was awesome.

But once she was done yelling at him, it was back to the sounds of the Windex bottle and squeaking on glass.  I was up in my bedroom, wondering how to spin the phrase "My sisters are cleaning my house against my will."  into "I think I'm the victim of a very dangerous home invasion, OMG ARE THOSE GUNSHOTS?!!!" for the fine folks at 911, when I heard nothing.  Silence.

WHIRRRRRRRRRRRRRRRRR.  Nope. No they weren't.  They were just looking for the vacuum. I hated my sisters and wished them ill.

Of course now, 3 years later I know they were just worried about me and wanted to make sure I was O.K.  I mean they went about it in completely the wrong way. What they should have done was taken one look at my awesome closet sensory/deprivation chamber, called a patent lawyer and secured a really cool domain name.  I'd make millions, get a genuinely 6'4" French boyfriend who, in some type of heroic act had tragically lost all appendages that would allow him to ever run away and I would live happilyish ever after.   But they didn't.  They dragged and cooked and cleaned with all those squeezy bottles under my sink which I now realize I should have re-labelled  when I refilled them all with plant fungus killer 2 years earlier.

Like it wasn't enough I'd been dumped, now if I died of a broken heart in my sleep no one would be saying "Oh how tragic, what a love story, look how beautiful she looks even with a flip flop on her head". They'd say, "Geez, no wonder he left. Have you see how smudgy her windows are?"  The best I could hope for was that someone would notice there was no fungus on them.

So to everyone who has gone through, is going through, might go through a major breakup.  Don't worry. In a few years, probably even less, you too will come out of the closet completely and totally gay (as in happy).

Honestly. You'll be happy.  Probably even happier than before.

I for one can tell you with all honestly that I'm 100% happier than a pygmy in shit.