You’ve seen the commercials for Amazon Alexa and Google Home but you don’t quite know what they do.  Here’s your beginner’s guide to using smart speakers (also known as home assistants or virtual assistants). 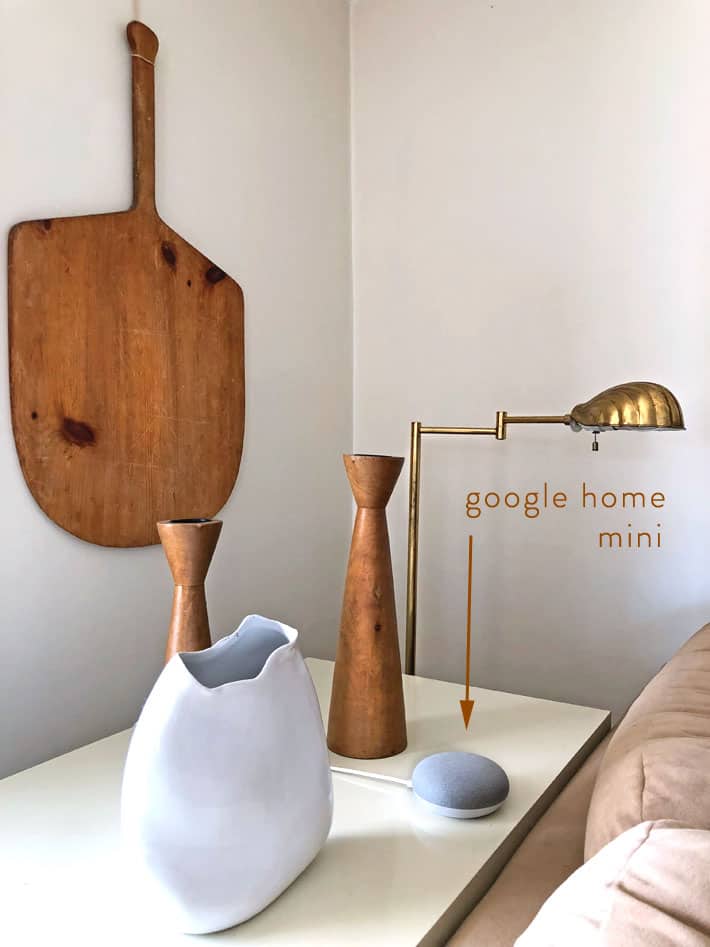 Can I tell you what makes me absolutely crazy?  When commercials portray anyone over the age of 40 as being technological simpletons whose legs turn to spaghetti at the thought of any gadget more modern than a Mr. Potato head.

It’s especially true for women in advertisements for anything tech related.  Just the other day I watched a television commercial where a loving daughter gifted her scribble brained 55 year old mother with a cell phone that only has two buttons.  ‘Cause more than that is confusing.

One button was for calling her daughter and one for calling emergency services because at the advanced age of over 40 she’s likely to have a brain aneurysm trying to operate even a 2 buttoned cell phone.  Toilet paper holders.  That’s about as complicated a mechanism as we women over 40 are likely to comprehend.

The “elderly grandmother” of 55,  beams at the two buttoned phone, silently thanking her daughter for recognizing how stupid she is.  Cause she’s a woman and she’s over 40 and she’s holding technology.

In my imagination the commercial ends with the 55 year old thanking her daughter but saying she has already made her own simplified cell phone using a Raspberry Pi, a breadboard and a few other parts.

You men over 40 get off a bit easier, but don’t worry – the tech world thinks you’re fairly stupid too.

I’d  hate to think that they’d convinced you of that so I want you to know that none of this is terribly difficult and it is a LOT of fun. 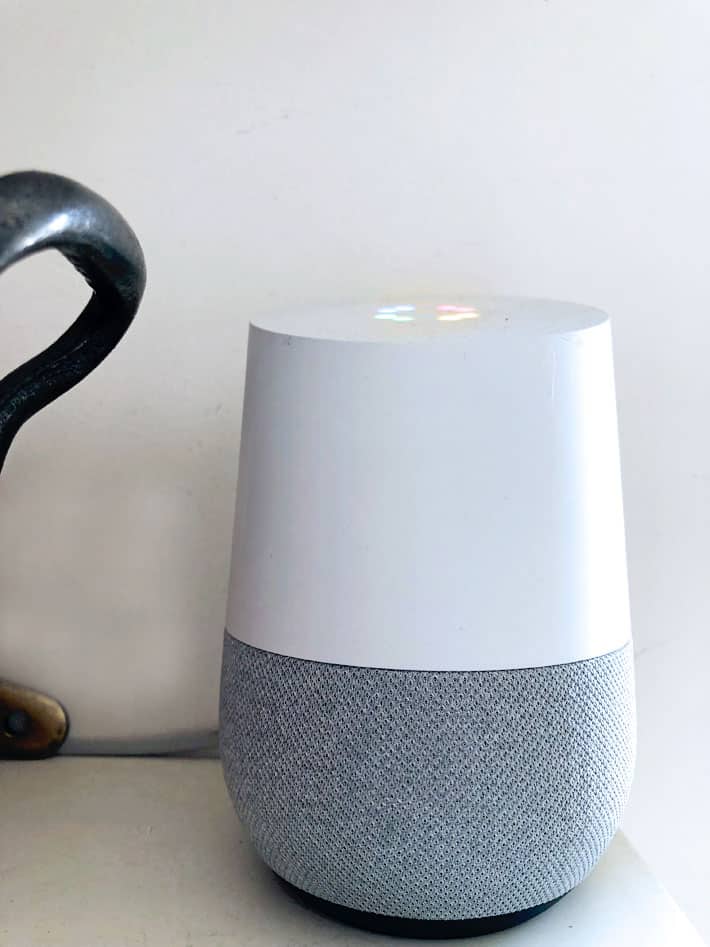 If you’ve been thinking about getting a home assistant/virtual assistant/smart speaker (they’re all the same thing) I encourage you to put that toilet paper holder down and get started.

There are 3 main Home Assistants for sale right now.

Other than that I can’t compare them because I’ve only owned and used the Google Home system.

So what do Home Assistants do exactly?

I keep the Google Home in my kitchen on a shelf where it reads me the news in the morning and lets me set multiple timers while cooking.  Plus it plays any music I want and can read me recipes. 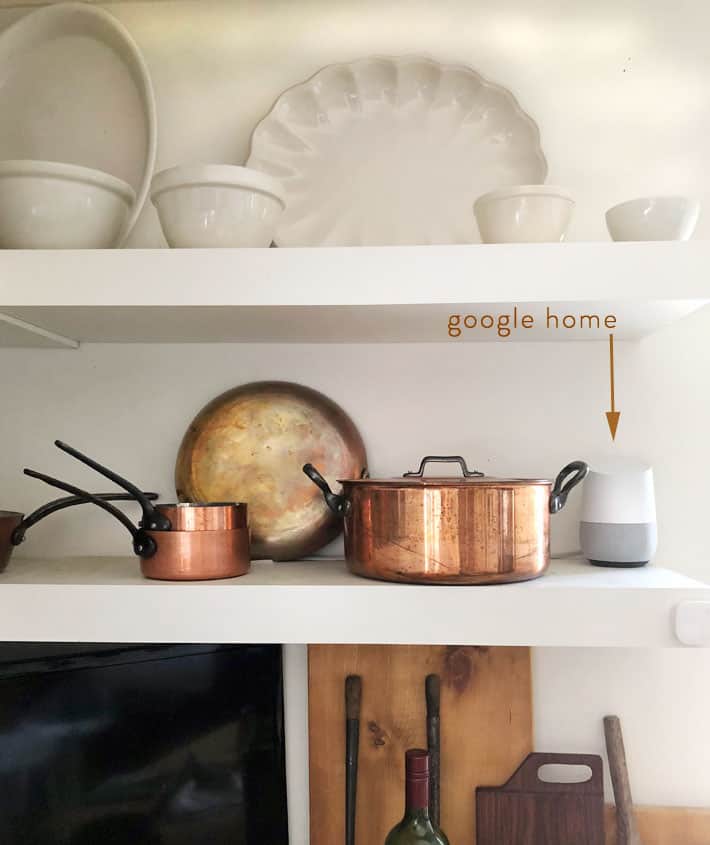 One Google Home mini is in my Living Room and one is in my Bedroom.

If you’re reading this post you’re probably thinking, Yeah, but why.  Why do I need this?  What exactly does it do?  Well, other than giving you information in a heartbeat at the sound of your voice it can actually perform tasks.

So how does this thing work?  Google Home works through an app called Google Assistant.  It’s the Google Assistant who is doing the dirty work.  Looking up things for you, making your grocery list, scheduling your appointments.  The Google  Home is really just a speaker that you can communicate with her through.

Here’s a little video featuring just some of the things I use my Google Home for every day. You know, when I’m not licking a potato.


There are a whack of other things I use my Google Homes for.  I use it for streaming music and videos through my Chromecast, start the day by having it read me the news from my local news station, CNN, BBC and the weather.  I am constantly asking it questions and I could easily do a whole other video featuring the things it does for me.  But I’ll save that for another post when I get further into turning your house into a smart home.

But it’s like Siri – for it to be helpful you have to use it.  So if you have one of these Home Assistants remember to USE it. Once you get into the habit of taking advantage of all that it can do you’ll grow to love it.

QUICK LIST OF WHAT YOUR HOME ASSISTANT CAN DO FOR YOU

And best of all for anyone over 40 – the Google Home doesn’t have a confusing number of buttons on it.  It doesn’t have ANY buttons at all. ;) 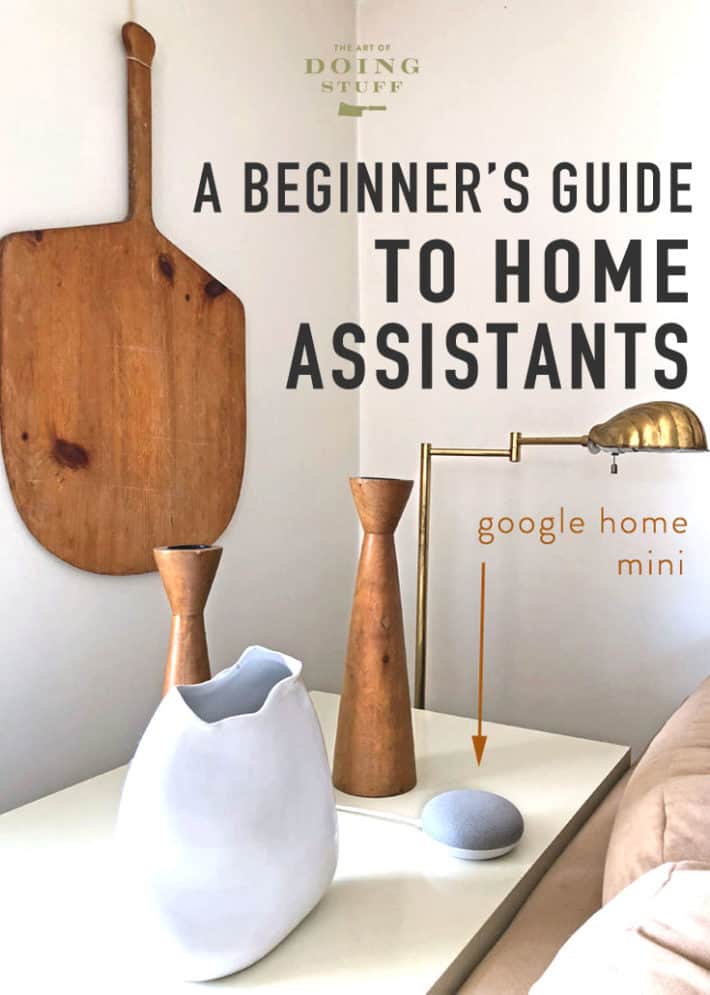