10 acres, 10,000 people and more antiques than you can shake a chandelier at.  This fall, Canada’s largest antique show proved people still like old stuff. 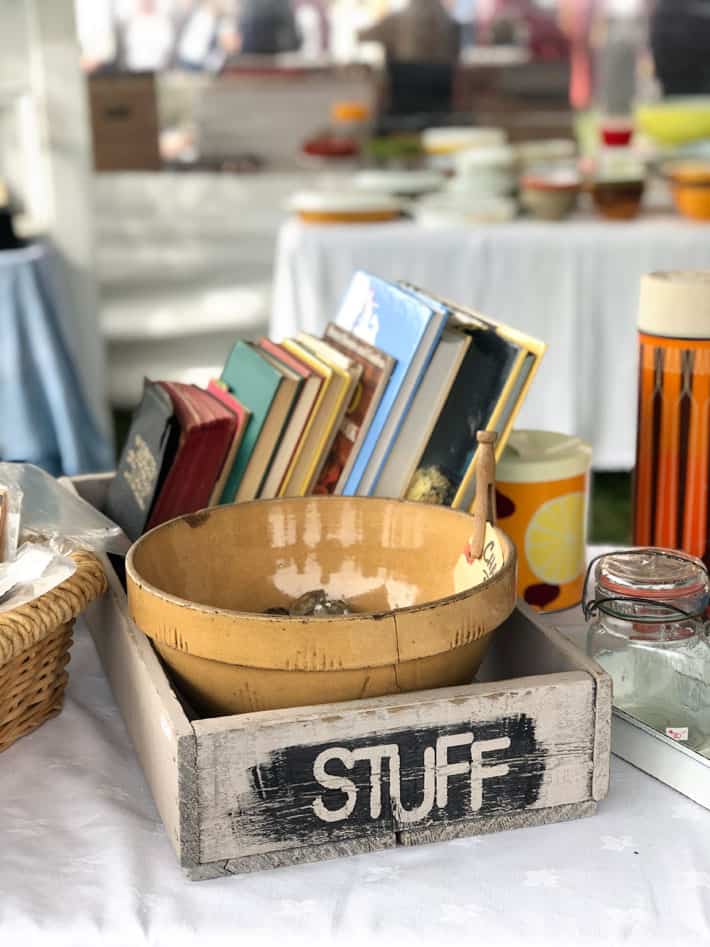 I normally don’t bring my camera to the fall antique shows.  I guess by this time in the season I’m ready to just wander around and enjoy myself, taking in all the things I’d buy if I owned a 17th century French chalet complete with a Frank Lloyd Wright addition and a few outbuildings. With wifi of course.

But then I got to the show and I couldn’t help myself. Because I saw stuff.  Good stuff. 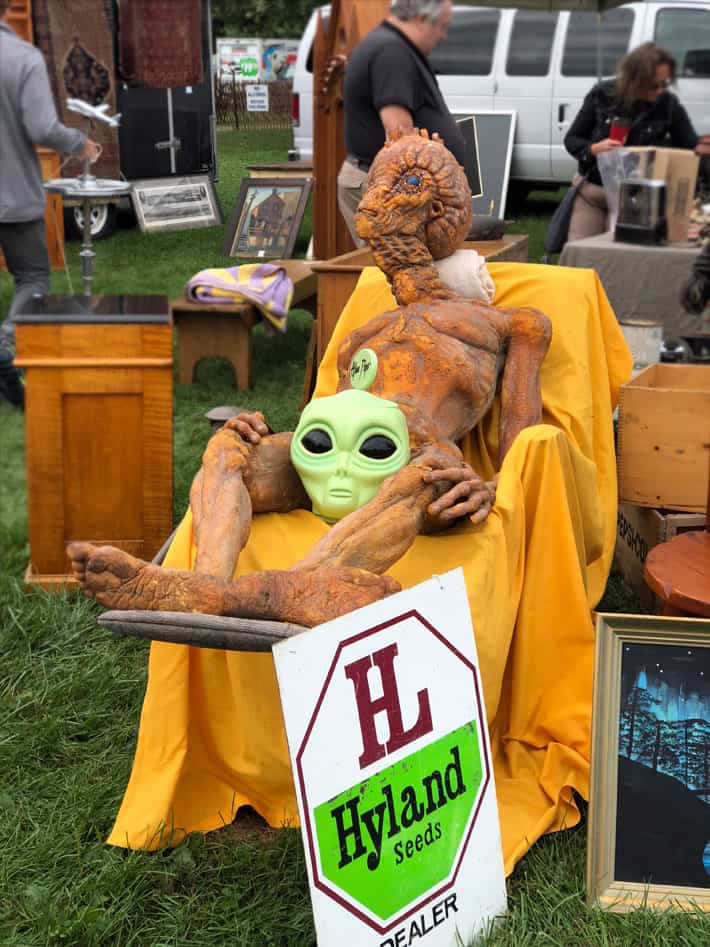 That’s not the sort of thing that you just walk past. You take a picture of it.

It is also my signal to eat french fries but so is waking up in the morning so we can’t really count that.

THIS year I woke up on the morning of the show and BLAM *just like that* it was fall.  The skies were overcast, it was really cool outside and not one, but TWO hipsters riding down my street had changed the flowers on their bicycle baskets from roses to mums.

Because of the change in weather from the previous 90 days, I dug into the back of my drawer for the cream wool fisherman knit sweater I bought at the LAST Christie antique show, pulled on a pair of boots and headed out the door.

Where I collided with a hipster on a bicycle.

The Weird and the Wonderful 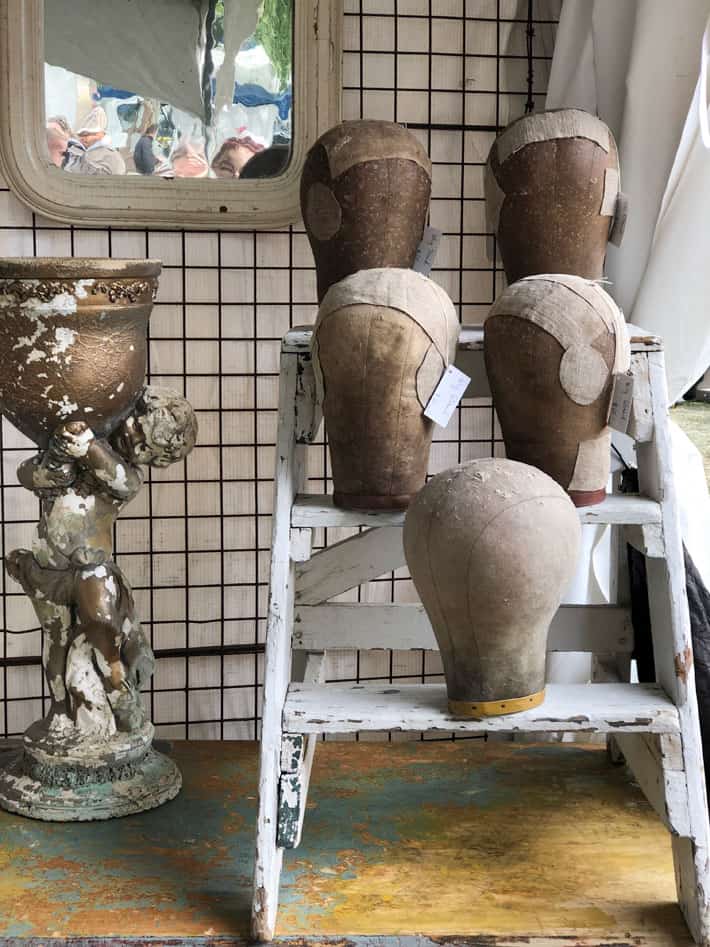 This wig stands really aren’t that strange, they just look it. 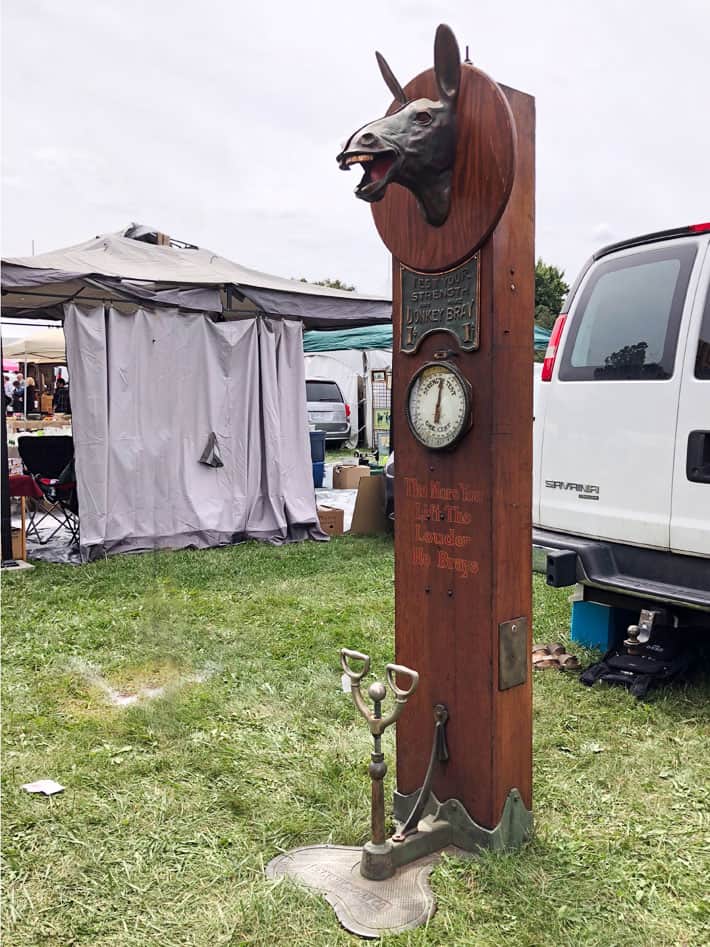 I guess you didn’t know you needed an antique donkey head, strength tester.  You do.  The donkey brays louder and louder the stronger you are. 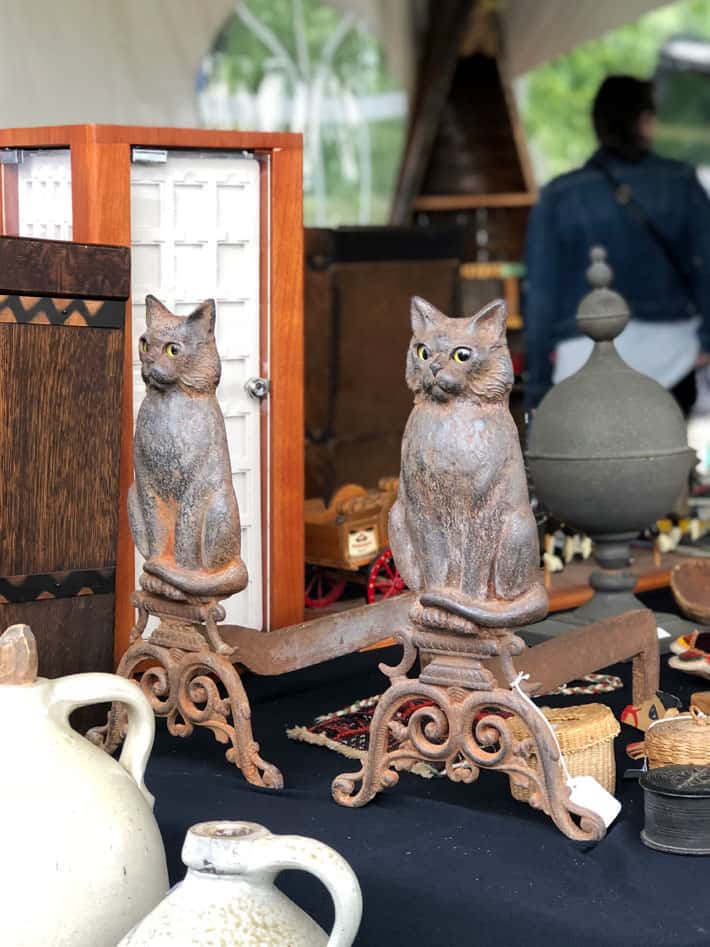 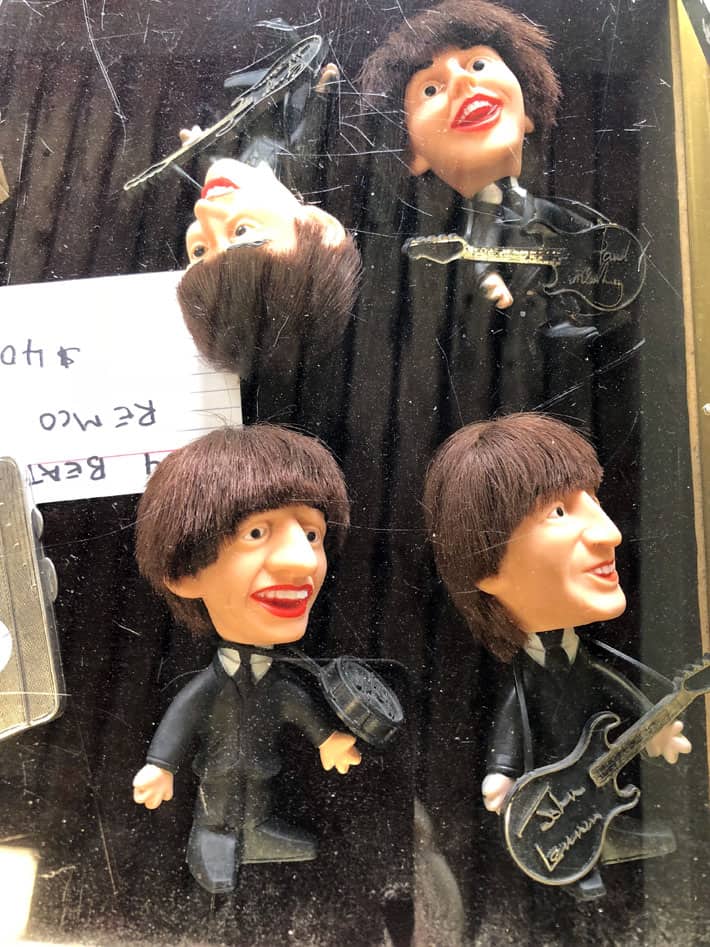 Only 3 or 4 years ago I’d run around at the beginning of Christie’s searching for Mid Century modern chairs.  Not a SINGLE vendor had them.  But recently booths devoted entirely to this iconic era have started showing up. 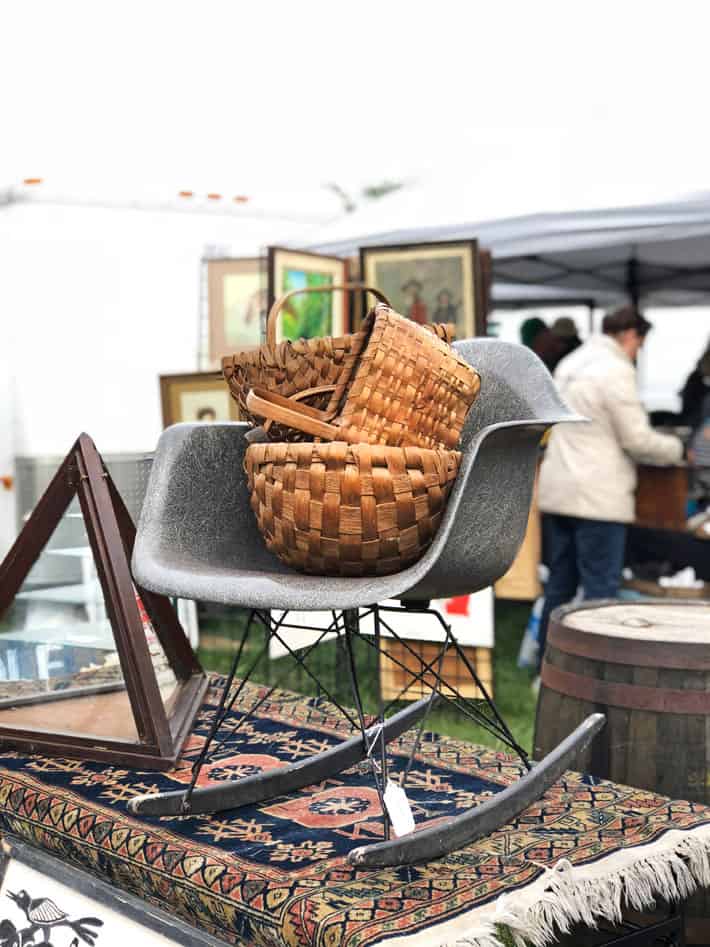 Antique show booths exemplify my basic decorating aesthetic.  Mix, match, mingle.  That chair with those baskets on that rug is perfect. 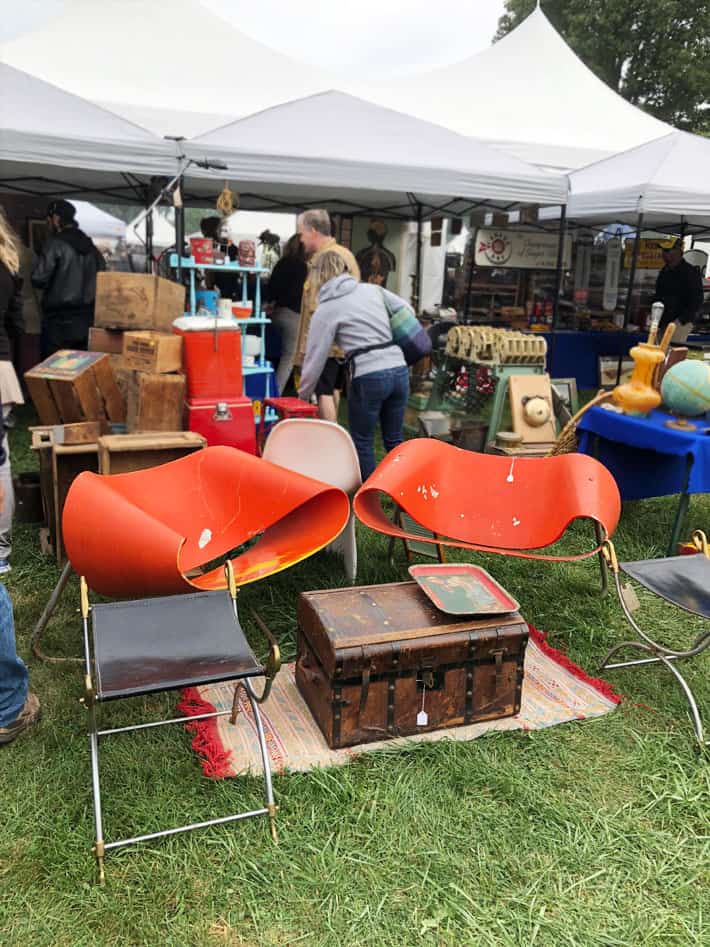 These ribbon chairs were the talk of the show. Priced at $1,500 each because they weren’t in great shape, they’d normally sell for a minimum of $5000 each. 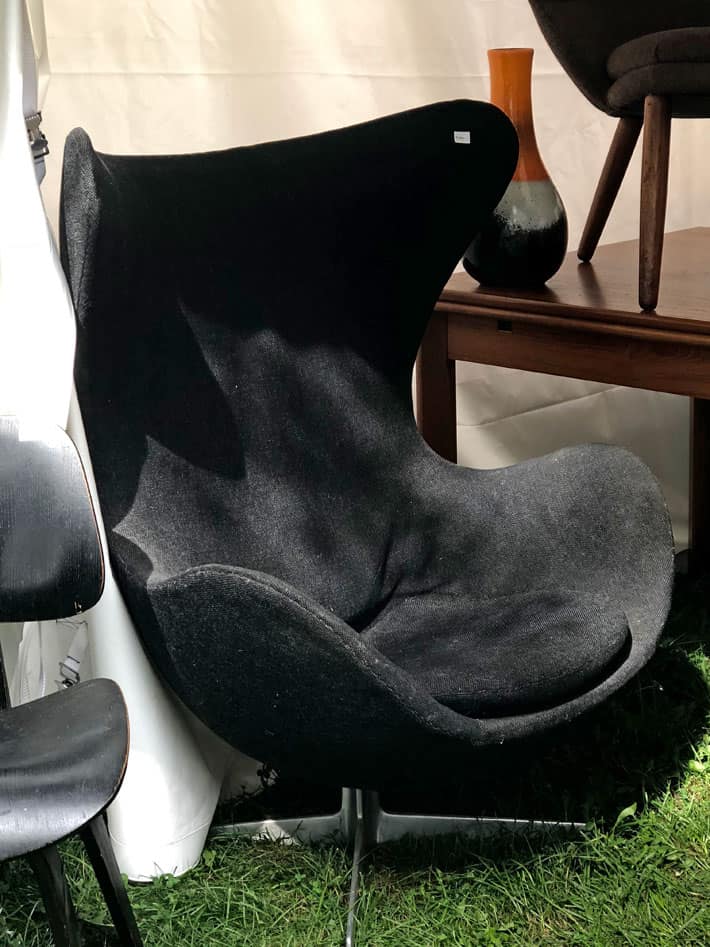 A classic egg chair (possibly by Arne Jacobsen) in what looked to be original upholstery. 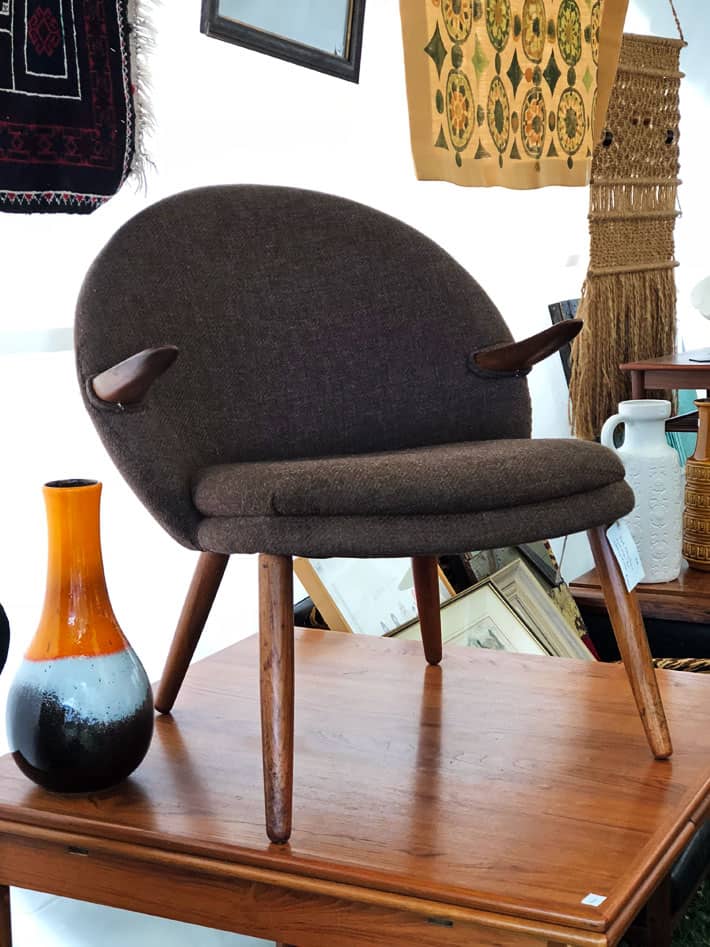 Honestly.  Everywhere you looked. You couldn’t swing a cat eyed pair of glasses without hitting a Mid Century modern chair. 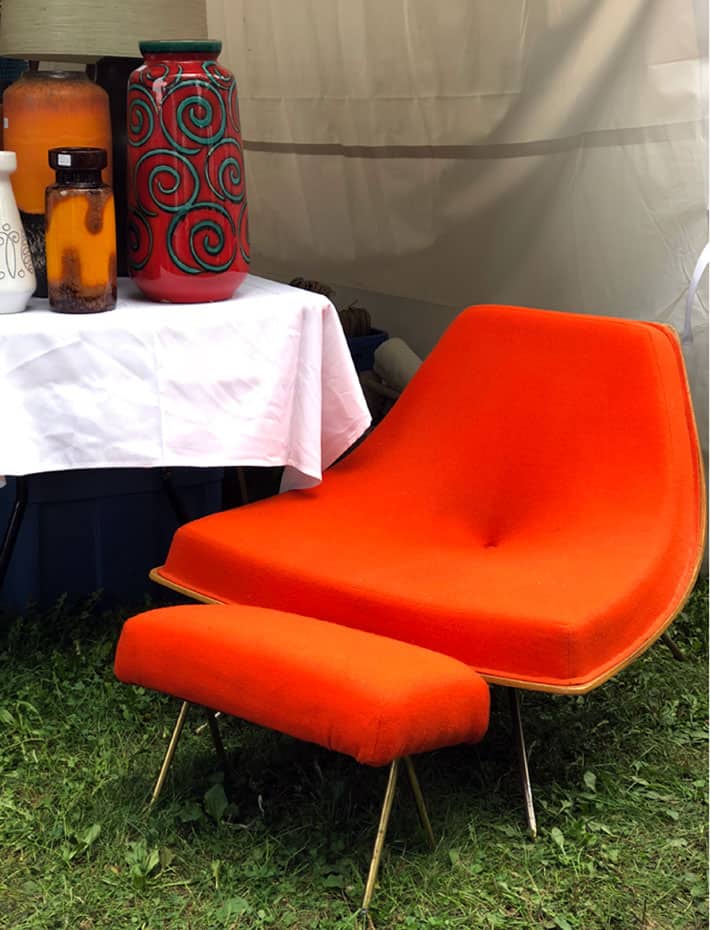 And even further back in the decades were these two. 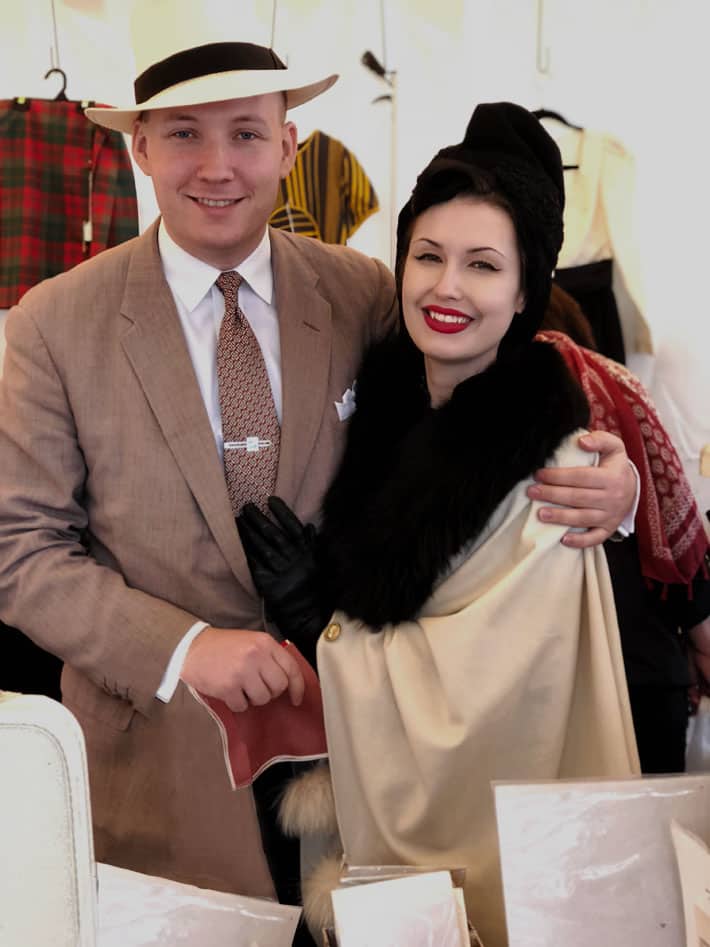 I ran into magician Steffi Kay of The Sentimentalists and her fella, singer Richard Herfeld browsing in one of the Christie booths. They looked fantastic.  Steffi’s a mentalist who’s appeared before Penn & Teller and at Hollywood’s iconic Magic Castle. If you click on “The Sentimentalists” link above, you can see her and her magic partner fool Penn & Teller.

What I was half keeping my eyes peeled for was a piece of modern art.  There’s always art at Christie’s although it isn’t a place that you’re guaranteed to find something.  Sadly they didn’t have the Cy Twombly I was looking for. Or the several million dollars I’d need to buy one. 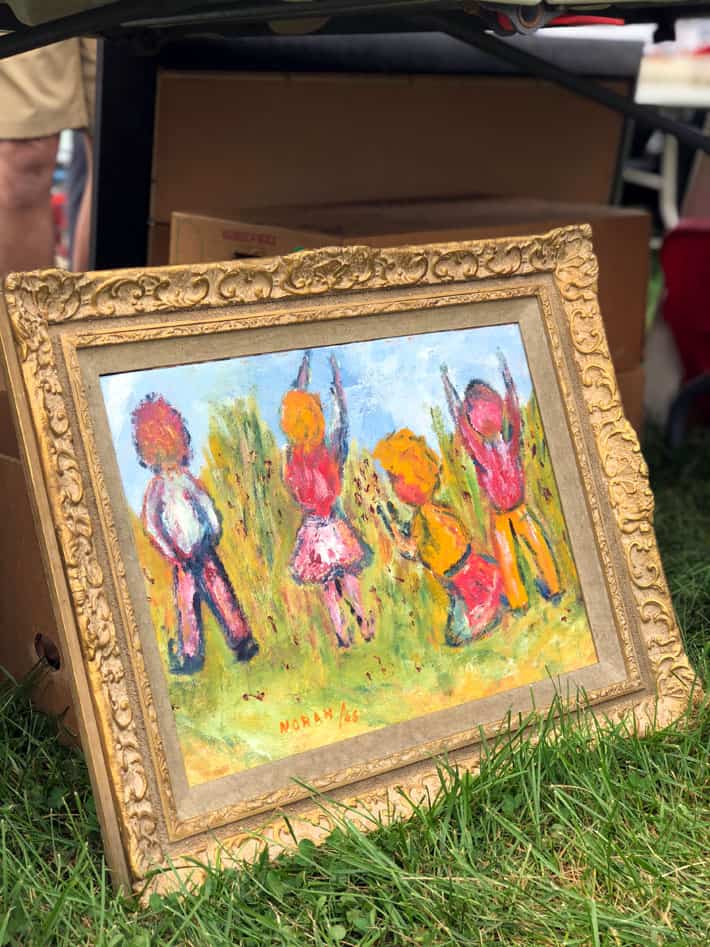 This strange painting had the added benefit of being double sided.  If you took the canvas out and flipped it around you had a whole other picture. 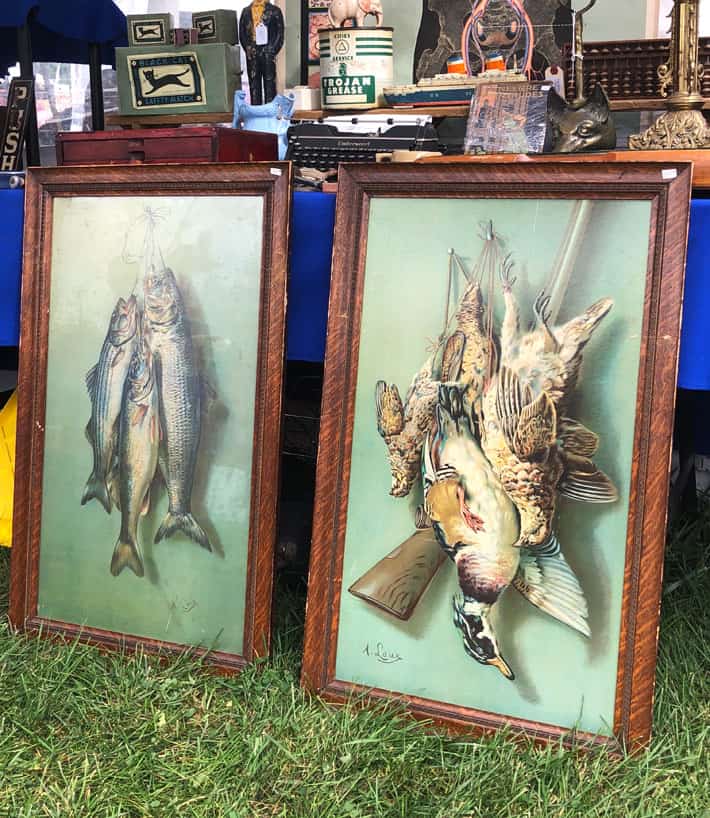 You’re gonna think I’m nuts, but these would look great in a few places.  And no. The garbage is not one of those places. 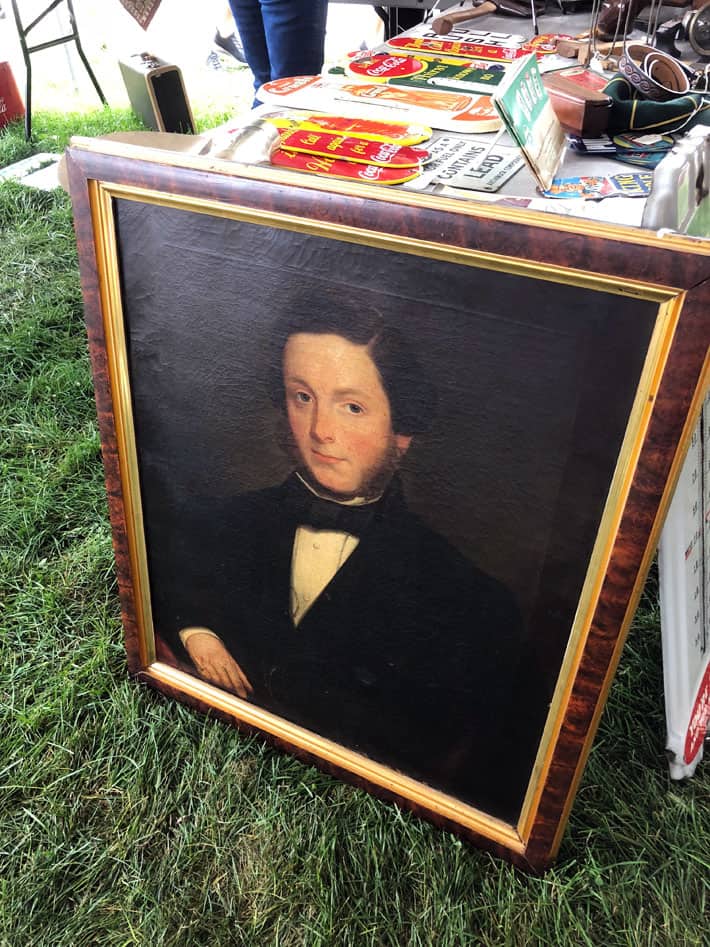 My favourite paintings are always portraits, specifically those on black backgrounds. 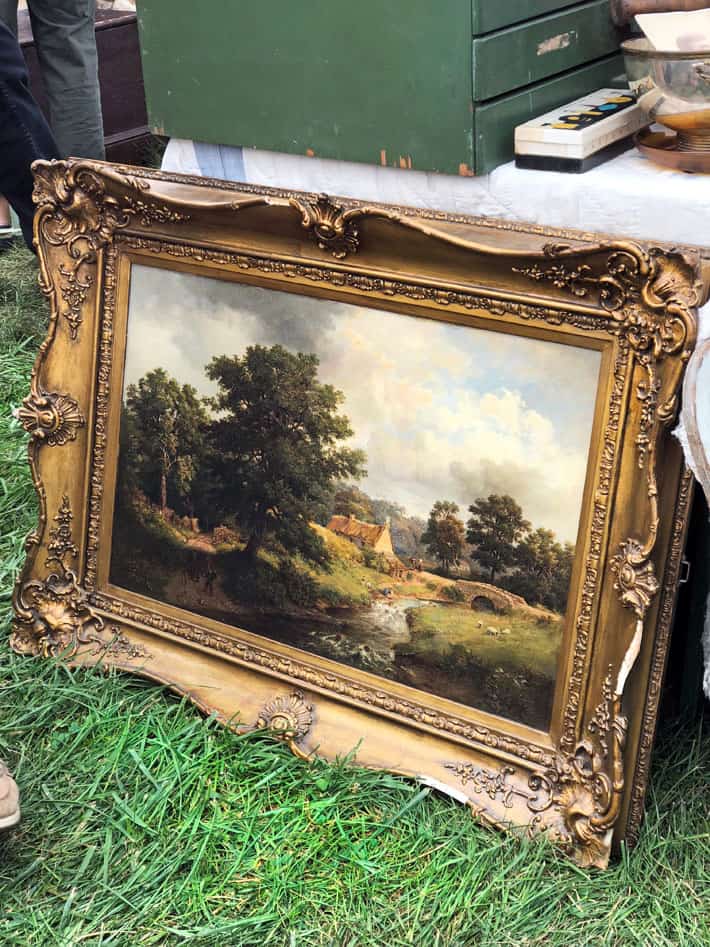 But who doesn’t love a landscape with a thatched roof.

And then there were the regular things you find at an antique show. 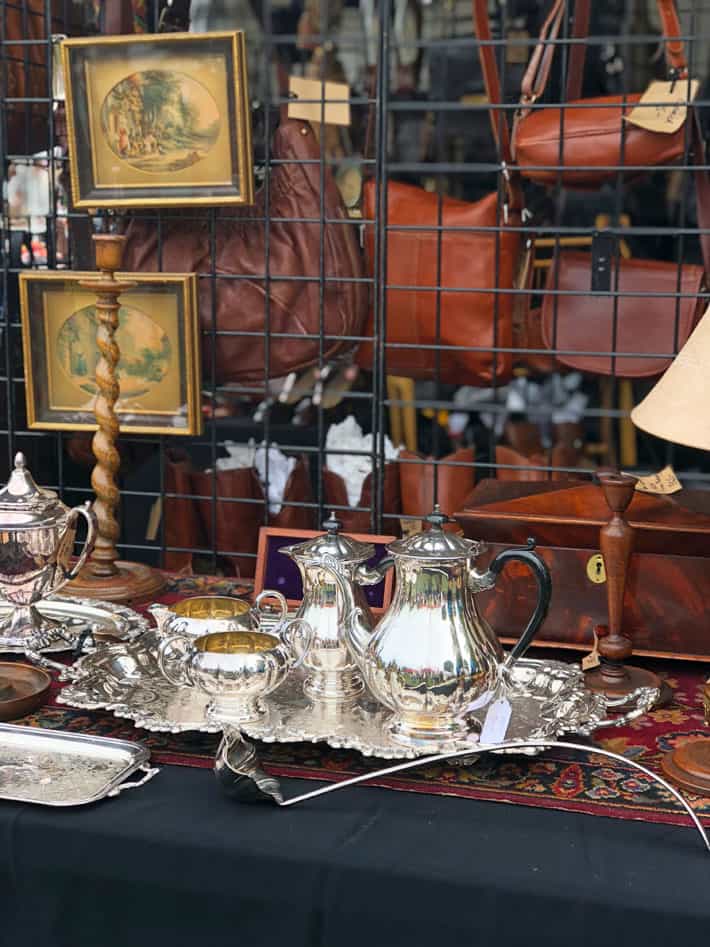 Silver tea service.  I look at these things and think I WISH we still lived like this. Where every little thing was a ceremony.

Actually.  I guess regular folk didn’t live like this. Aristocrats and royalty did.  And maybe gangsters who were trying to make their way up the social ladder. 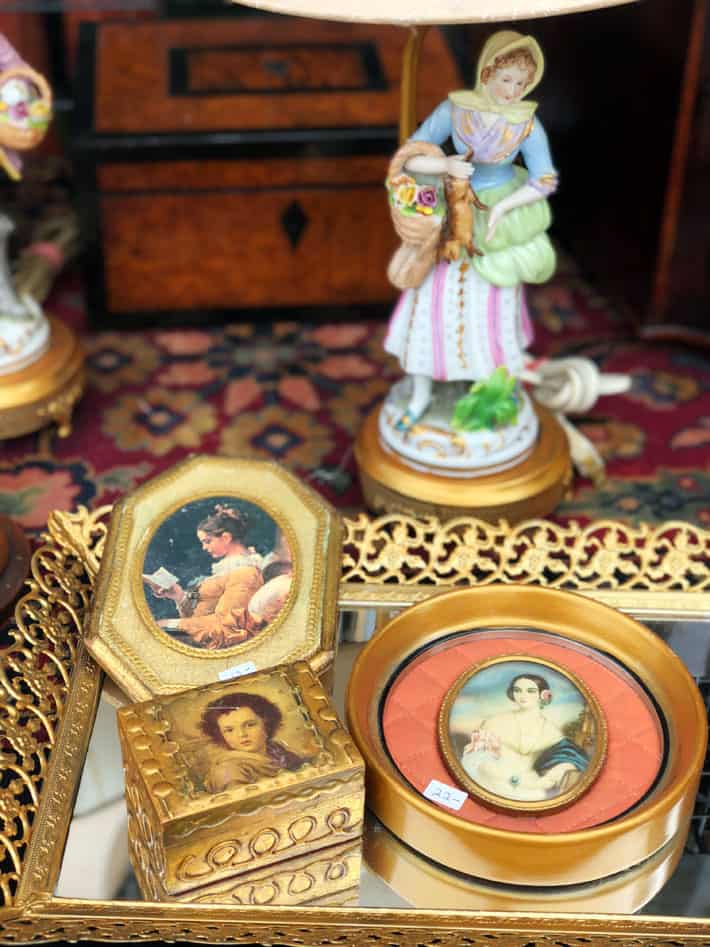 Just some pretty things sitting on a pretty tray. 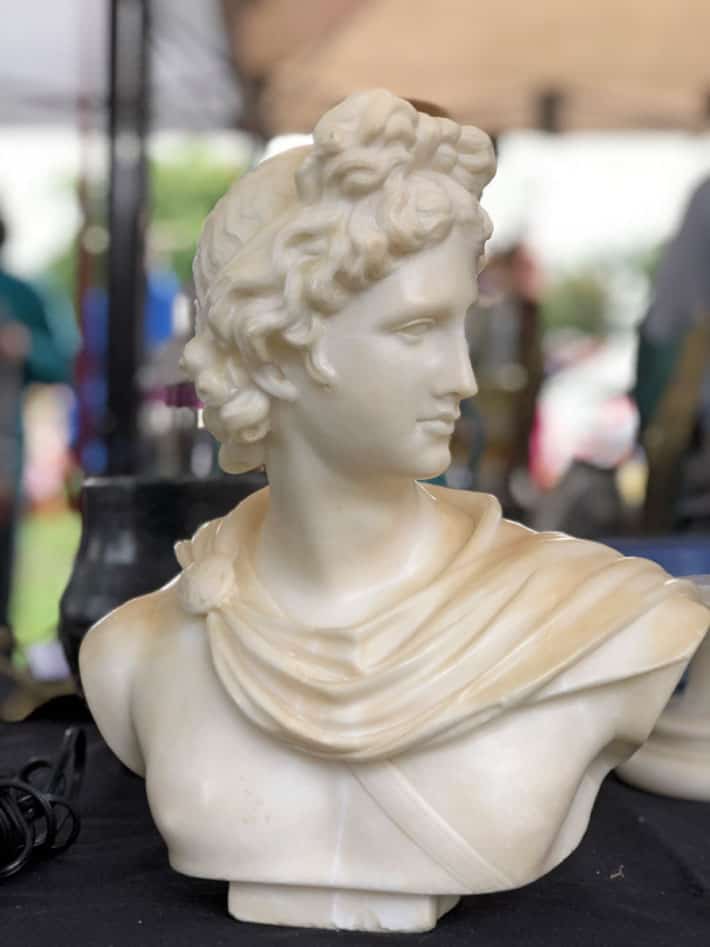 This marble bust made it to the show in one piece, but during its travels the stand it sits on broke in half.  Which oddly didn’t reduce the price of the item by half. 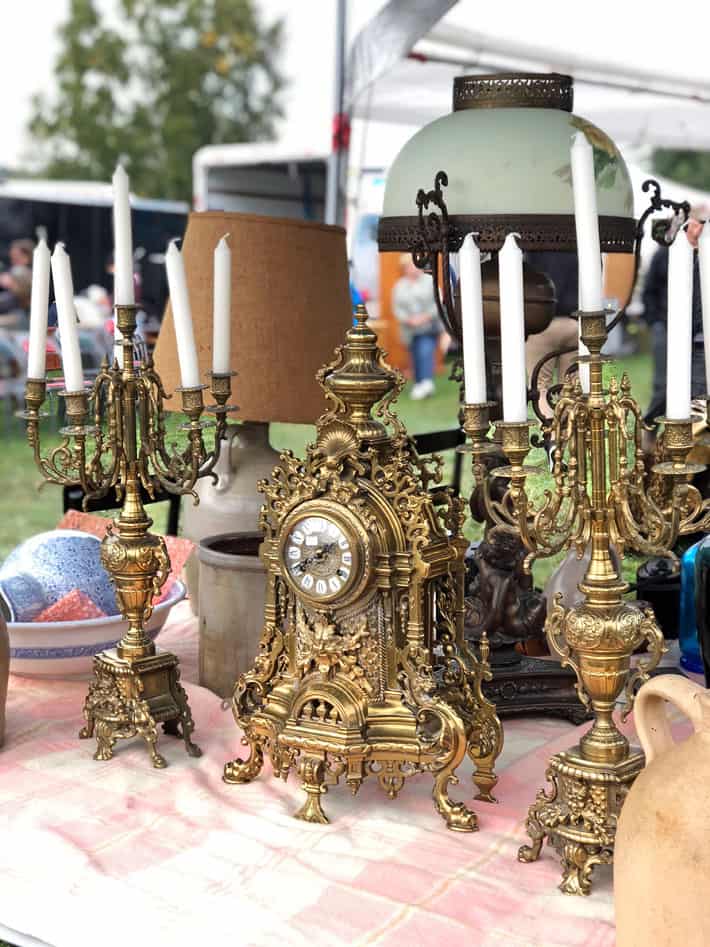 You couldn’t strap it to your wrist and it won’t tell you your steps, but THIS is a nice timepiece. 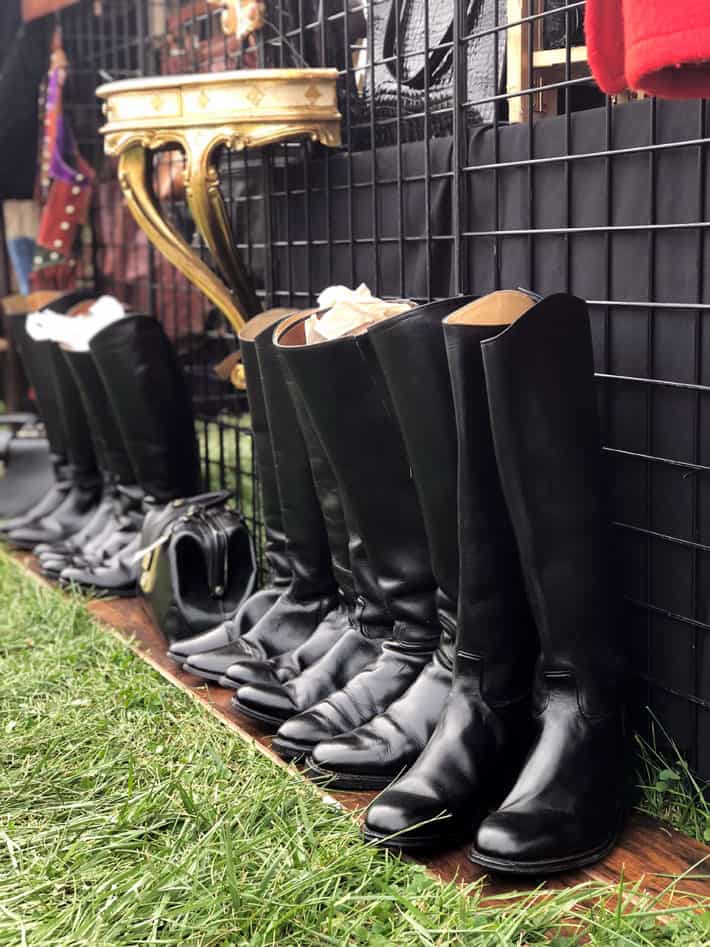 Being a former rider, anything having to do with the sport attracts me and makes me sad at the same time. Horseback riding has THE best clothing and accessories. 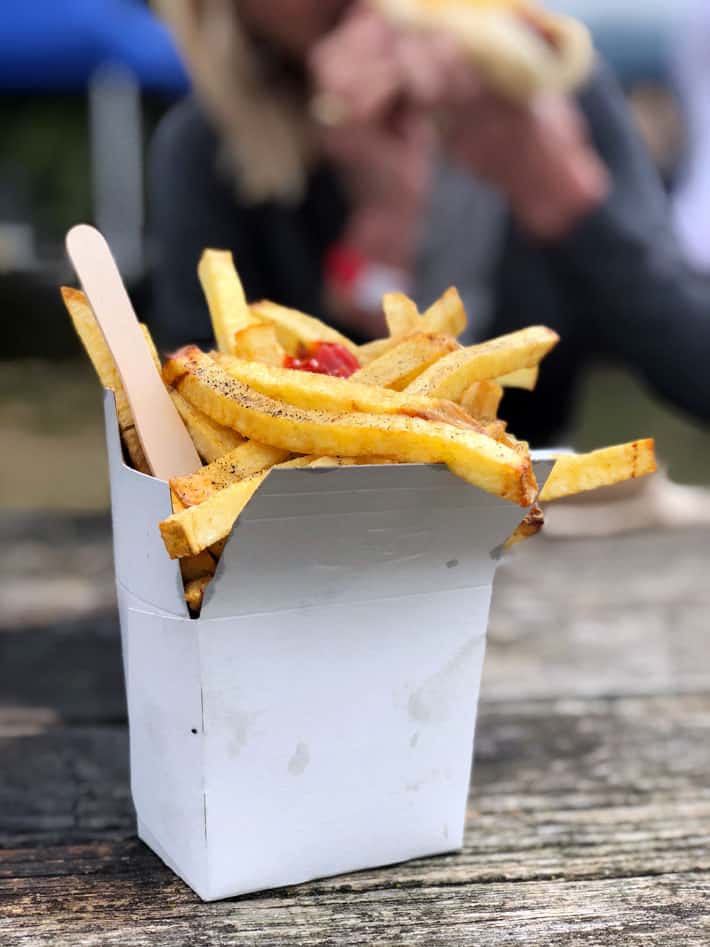 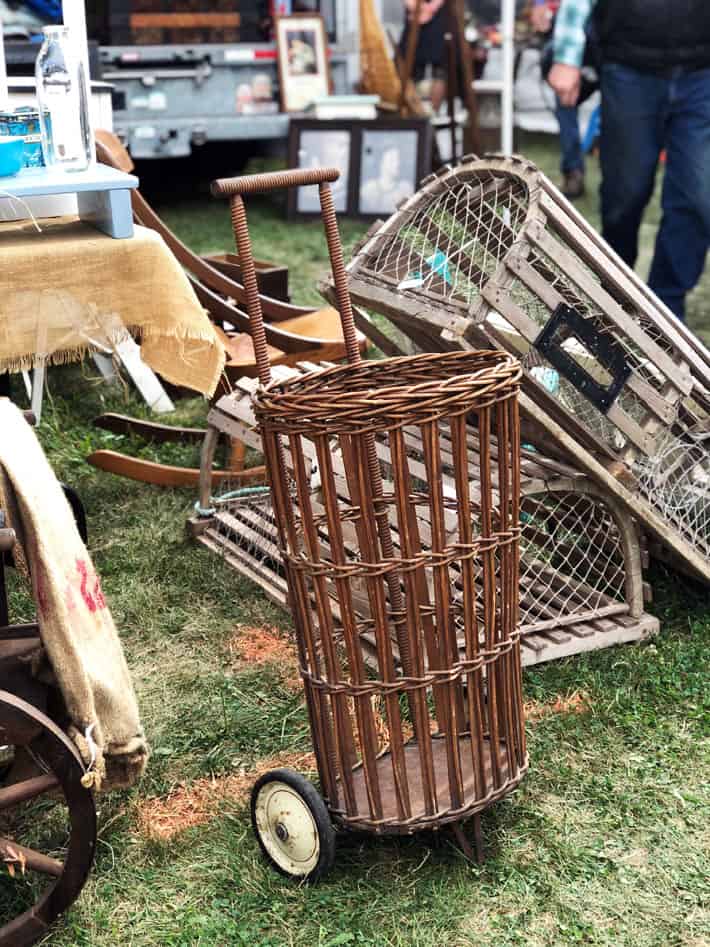 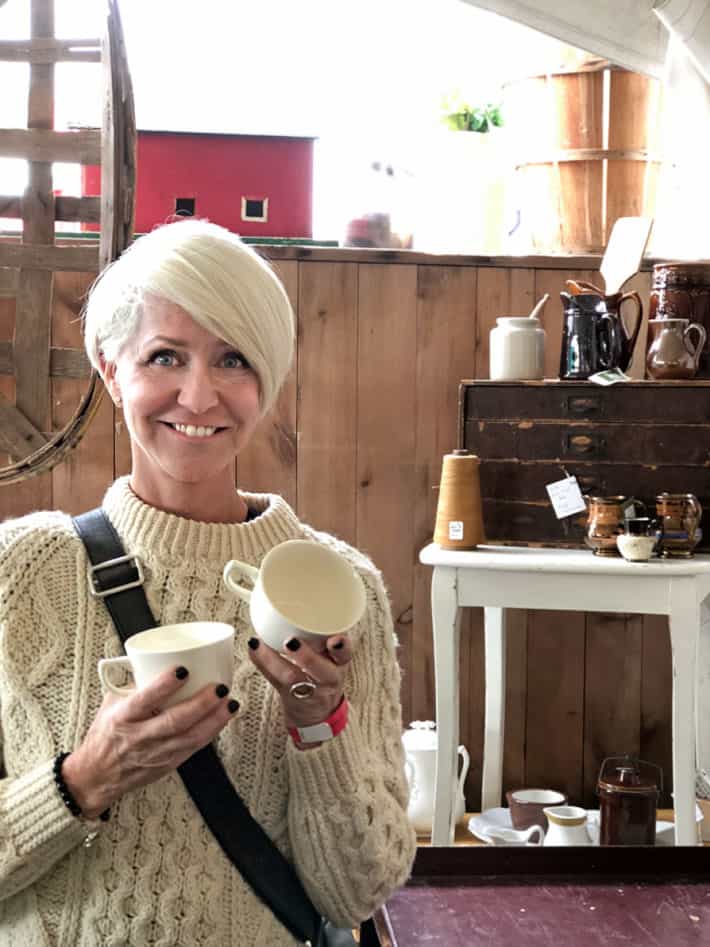 I really should have worn a cape. People look so much better when they’re wearing a silk cape.

The last two photos show what I bought at the show.  The wicker market basket and those two ironstone cups.  I also bought a step stool which I’ll show you in another post.

That worked out about as normally as one can expect. Go to an antique show expecting to buy nothing and come home with a market basket even though you grow all your own food and only go to the market to socialize. Perhaps I could use the market basket to bring very small people home from the market. Like a rickshaw.

And the mugs? Well, those I didn’t need. But frankly there are very few things you need from an antique show.  There’s just a whole lotta want.

And some really great stuff.

Have a good weekend.  Still no decision on the floors. 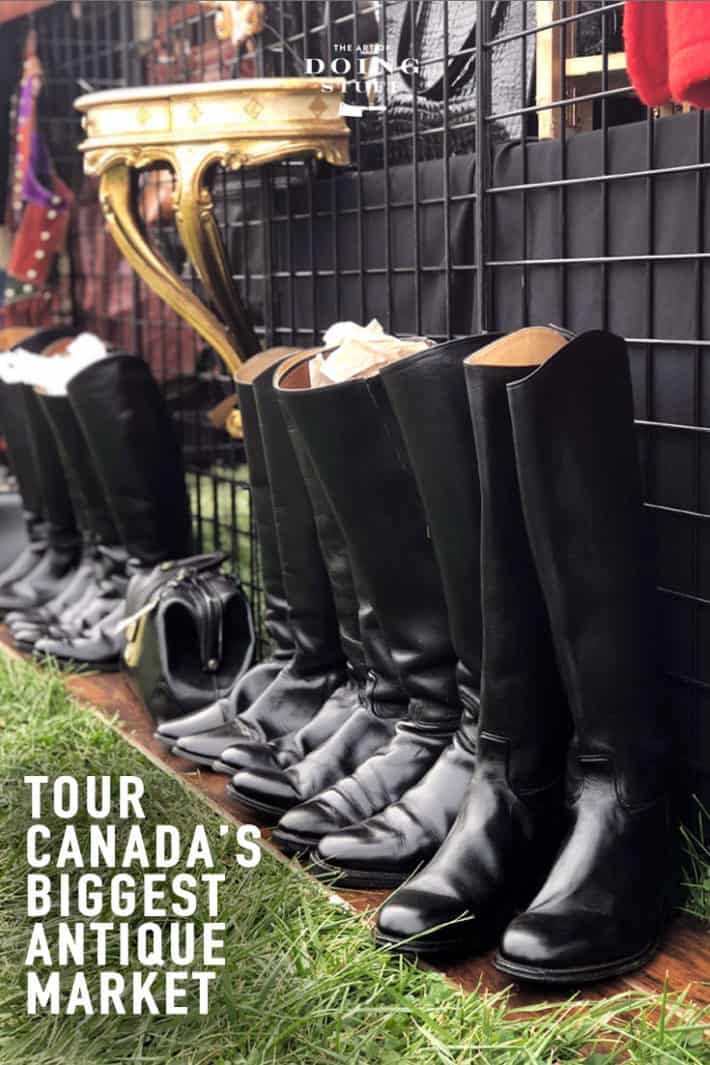