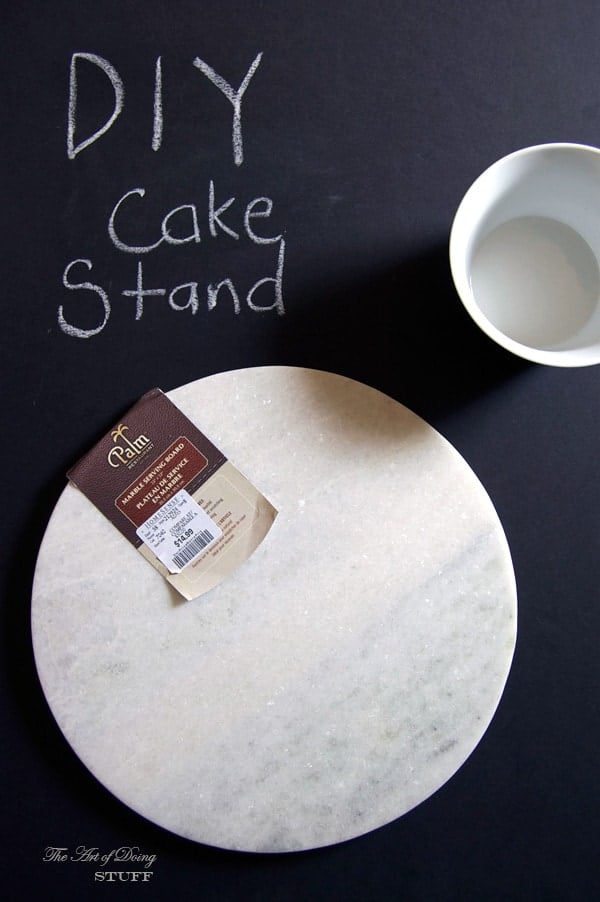 In my head, this is how last week's Rose Cake post was going to go; publish post, wait for the comments come rolling in.  The comments would be:  the cake looks great and what an ordeal but that PEDESTAL!  THAT CAKE STAND!  WHERE DID THE CAKE STAND COME FROM?  It was going to be question after question about the glorious cake stand until I finally broke down and let you know I MADE the cake stand and everyone could calm down because I was going to do a post on it.

I had it all figured out.

Nobody asked about the pedestal.  No one.

But just to show I'm not one to carry a grudge (or a concealed weapon) I'm going to show you how to make this cake stand anyway.  Even though we've established you're assholes.  Who eat brussels sprouts.

This is kind of complicated, the sort of thing that I probably wouldn't recommend you try unless you're really confident in your ability to glue one thing to another.  So mainly you need either one working hand or even just a good set of teeth and a strong armpit.

Round Marble cutting board / cheese tray

2.  Center the base of your bowl onto the underside of the marble.

3.  Mark around the base of the bowl with a pencil.

4.  Run bead of silicone around the bowl base.

5.  Set bowl back on centre of marble using pencil mark as a guide.

6.  Allow to dry for several hours before moving or using. 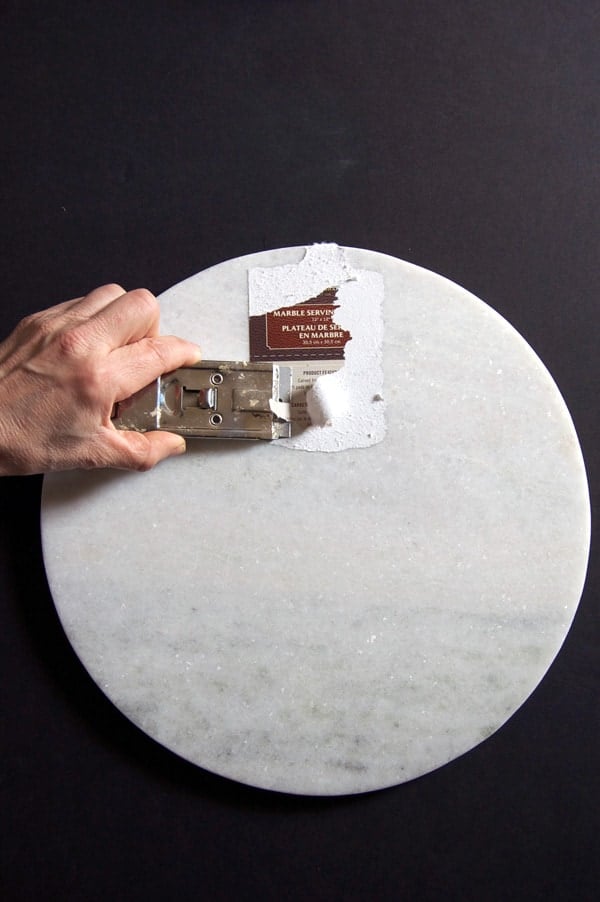 I got my hunk of marble for $14.99 at Homesense. That's Homegoods to you American folks.  I found the exact same one for $19 on Amazon.   It's really pretty.  It has bits of sparkle in it.  Natural sparkle.  Not stripper sparkle.

The bowl is from Dollarama which I already had in my cupboard and I always keep silicone on hand because you never know when you're going to have to glue it to his leg.

The hardest part of this whole project was scraping the label off of it.  For $14.99 you apparently don't get one of those easy to peel off labels. 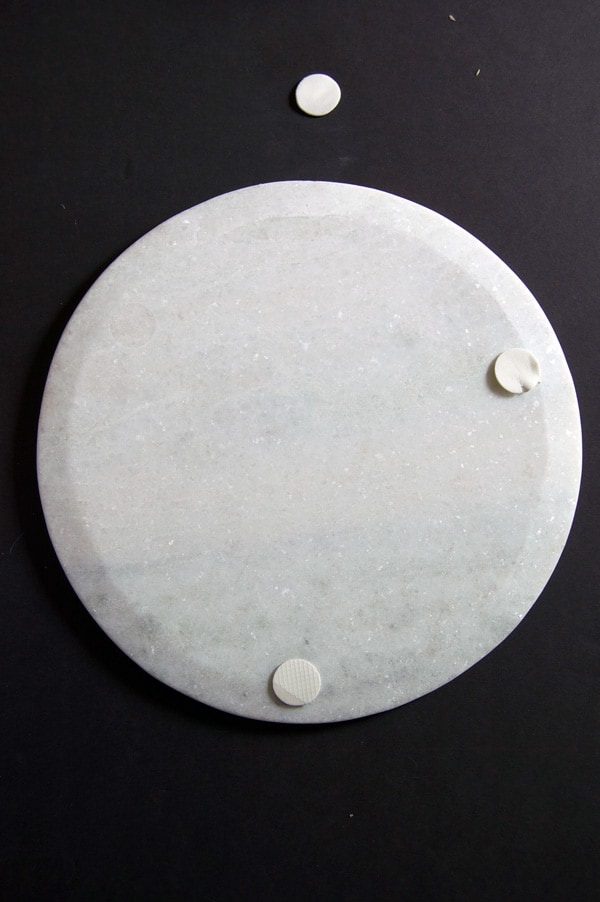 The board had little felt feet so I scraped those off too. (those of you using your armpit and teeth can wedge the board under your arm and just gnaw away at the feet.  They'll come off lickity split) 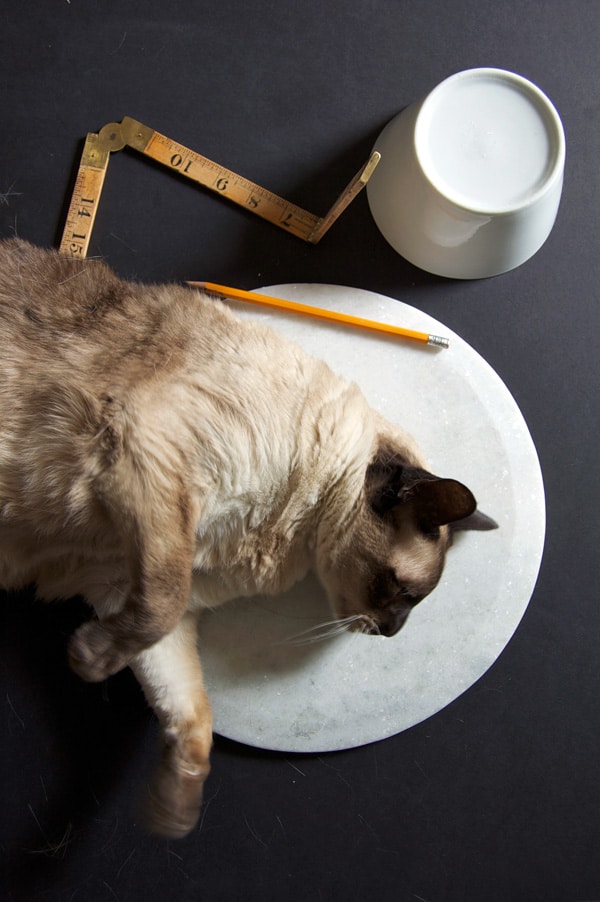 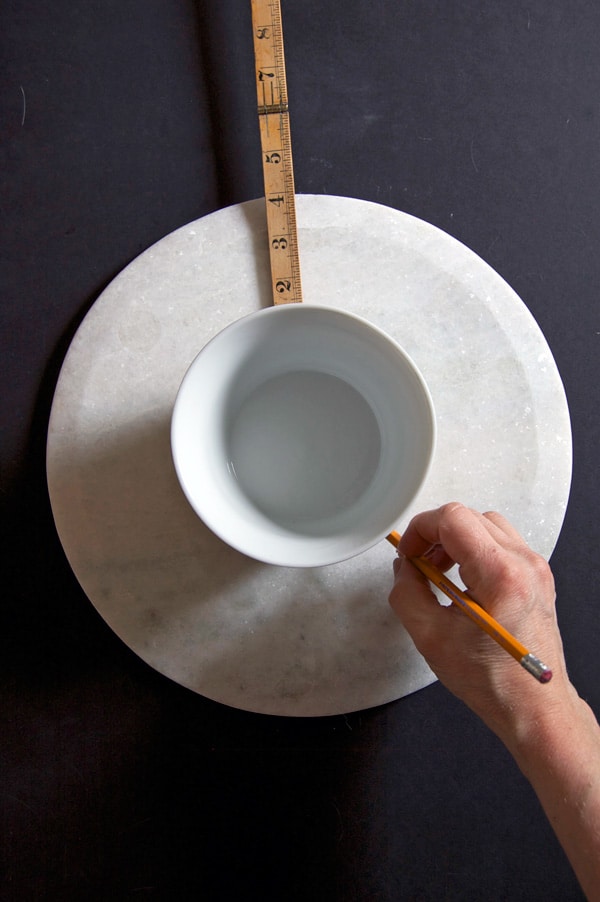 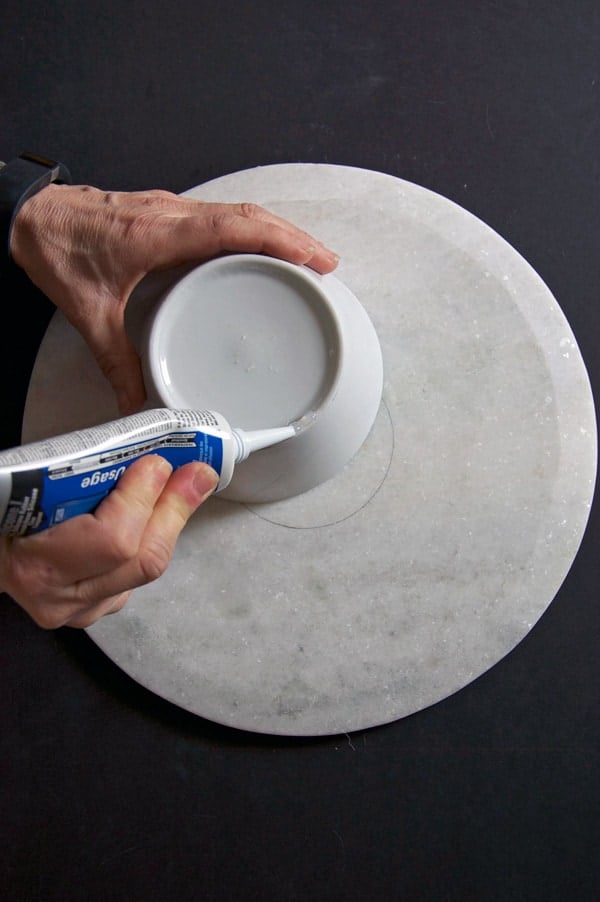 Once you've marked the circle, flip the bowl over and run a bead of silicone around it. 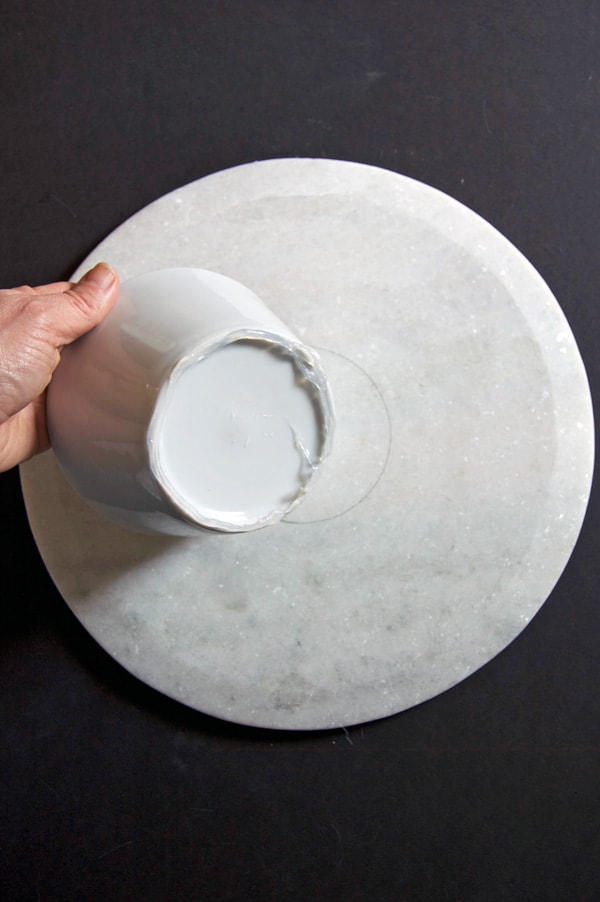 Do it as neatly as possible.  So nothing like mine. 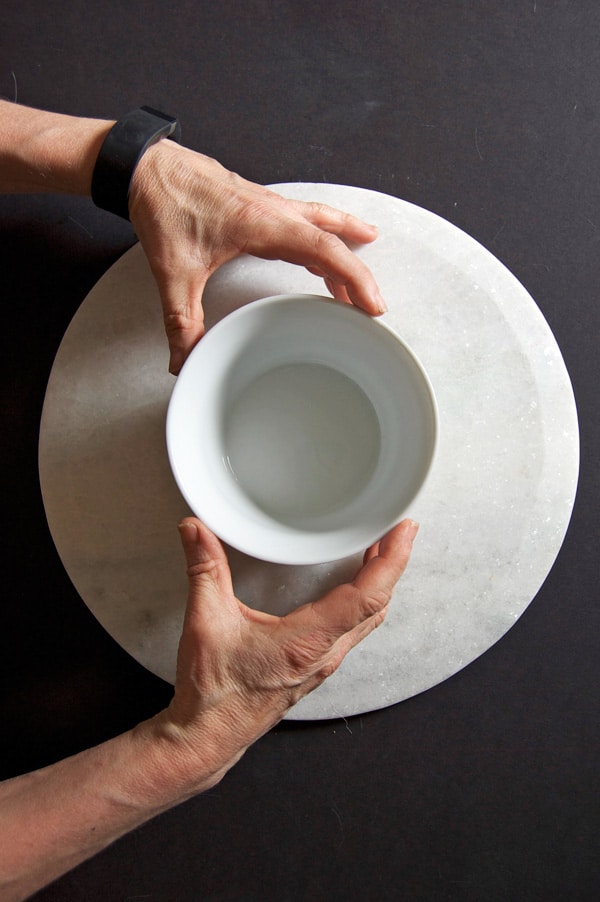 Place the bowl back on the marble, lining it up with the pencil mark. 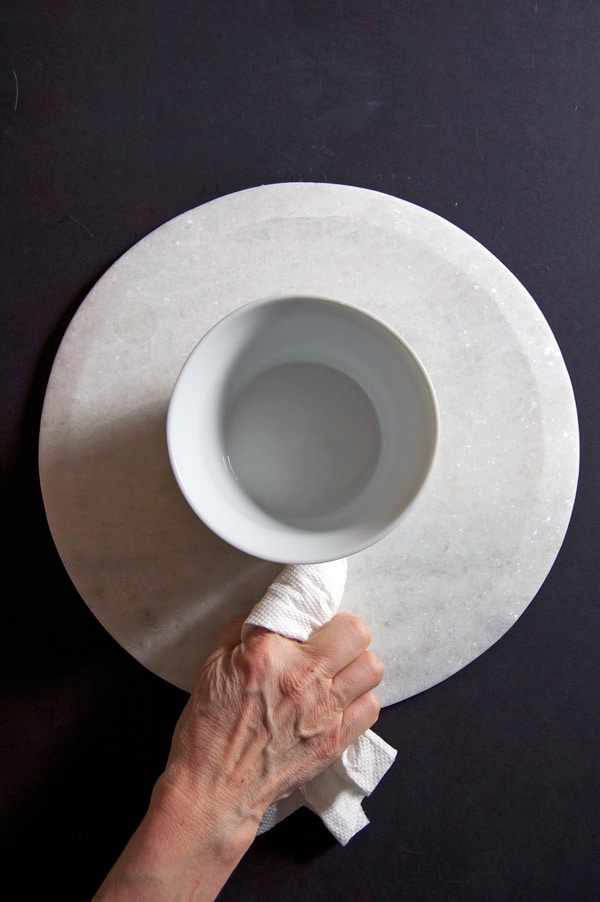 Wipe away any silicone that oozes out.

Now you have a beautiful marble cake stand that was fun and inexpensive to make.  If you have better acquaintances than I do, everyone will rave and rave about it, asking where you got it from and how could they get one too.  That PEDESTAL!  THAT CAKE STAND!  WHERE DID THE CAKE STAND COME FROM?  That's what they'll say.

Of course I rarely have a cake to put on a cake stand but it looks great with other food items on it as well.  Cake plate or Shake n' Bake plate this one's a winner. 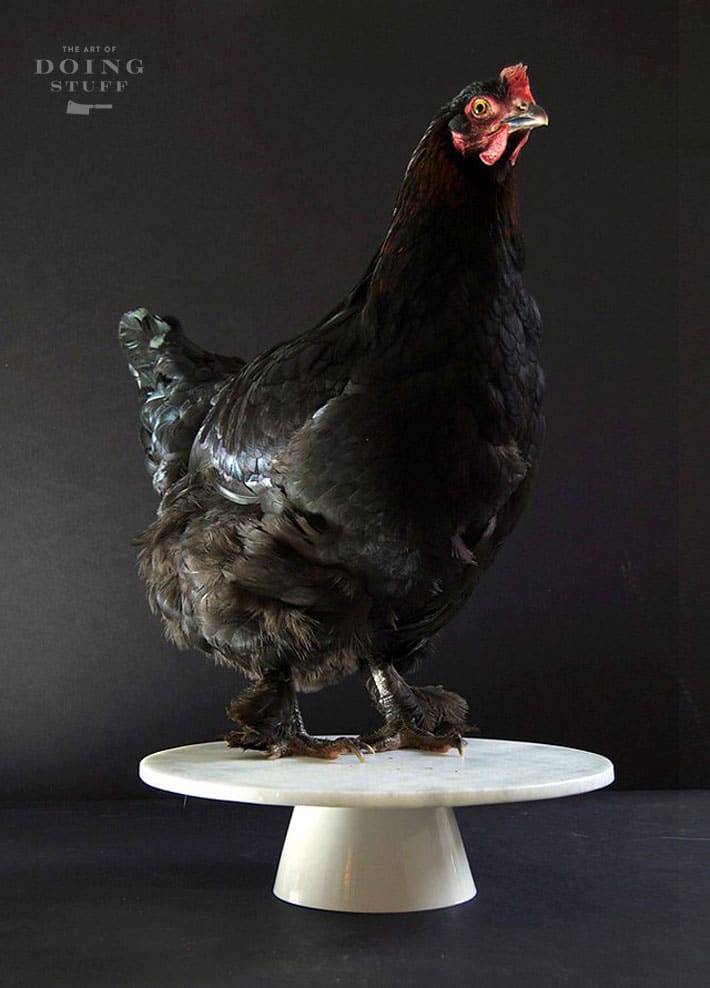