When last we met, Cuddles had a very small problem with maggots trying to eat her alive.  Such an inconvenience.  She got off easily because the majority of animals who suffer from flystrike die.  The only reason Cuddles made it through is because I happen to work from home and spotted it right away.  I also happened to have antibiotics on hand that I could give to her immediately.  Had these two things not have been working in my favour, Cuddles would most probably have died.  Again.

Once she got over her flystrike episode she was feeling great, running, bouncing and bullying.  Bullying is a good sign in a chicken. It means they're feeling happy and healthy when  a chicken has the energy to divebomb another chicken's wattle for no apparent reason.

Then this happened.  (poop picture coming up) 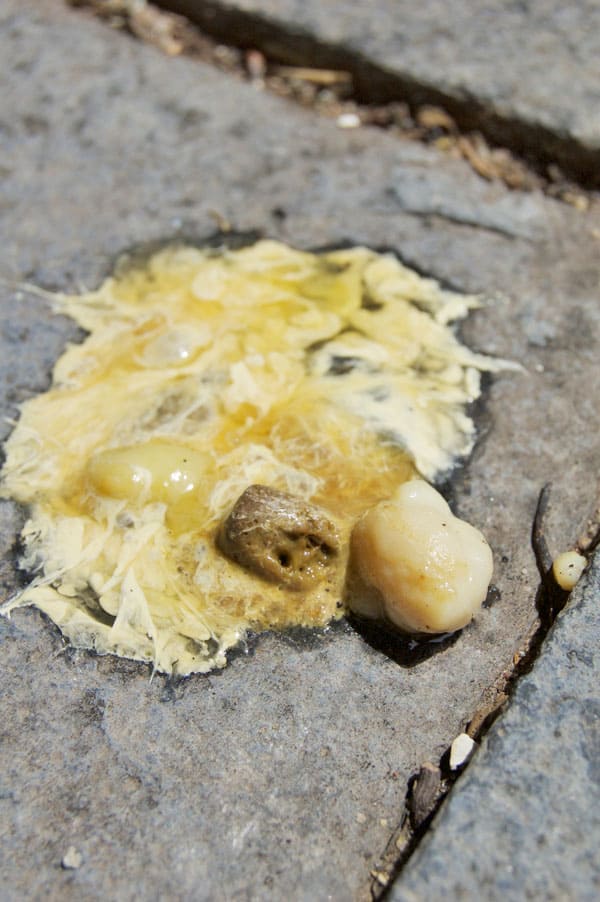 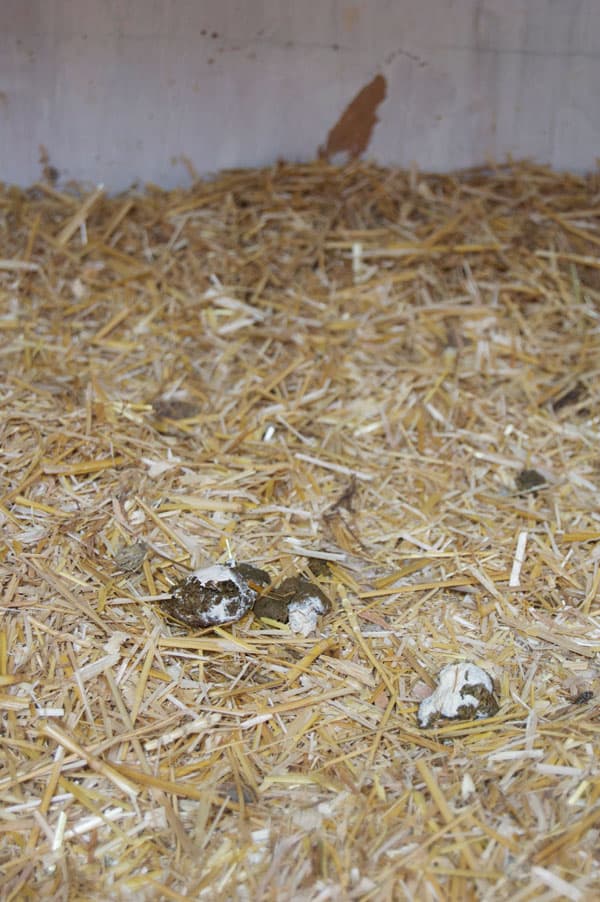 If it's hot out and the chickens are drinking a lot, their poop  will be watery, or if they've eaten a lot of greens it might be green ... but generally a healthy chicken poop looks like the above photo.  The white is urine and the poop coloured stuff is poop.

So there are two things wrong with the poop in the first picture.  It's very watery with only a tiny bit of "poop" in it.  That means she's drinking, but isn't eating.   Watery stool in general means she isn't feeling well.  The other issue with the poop are the yellow blobs in it.

Those yellow blobs are COOKED EGGS.  Yes.  Yes they are.

That means that a) Cuddles is laying eggs internally and they've given her an infection which has given her a fever which HAS COOKED THE EGGS INSIDE OF HER. 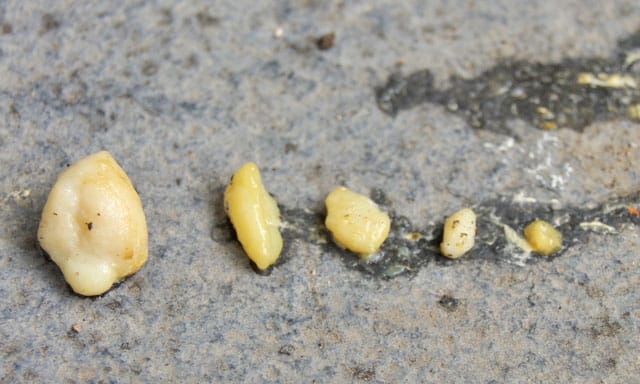 In that one poop I found 5 eggs.  Granted, they have no shells, but they are eggs. 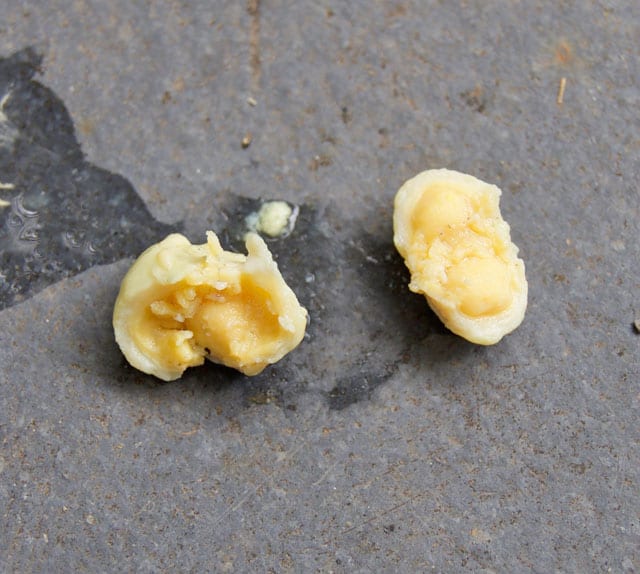 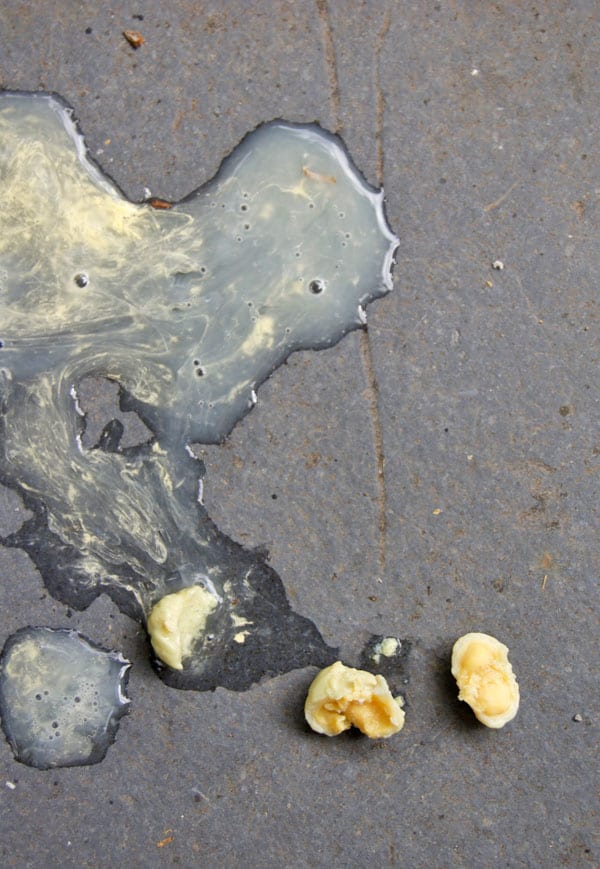 The second I saw this I knew she was going to need antibiotics again and right away.  She was so sick and lethargic and just feeling awful.  So right away I syringed some antibiotics into her and fed her things she loved and I knew she would eat.  Tomatoes, corn, mealworms, pedicure toe separators.  Yeah.  The pink spongey ones. It happened about 2 years ago.

Making sure an internal layer has food in them is important for two reasons.  Eating keeps them alive through nutrients obviously, but having food inside their little stomachs allows them to have something to pass.  The more they're pooping, the faster and easier time they'll have  getting rid of the eggs that have built up inside of them.

This is all just experience talking by the way.  I'm not a vet, have never been a vet and could never be a vet.  Unless the only job I had to do was syringe feed chickens.

Or extract a puss filled abscess on a cat.  I can do that too.

Also if you need any small home dental work done, I've experimented with that too but I wouldn't recommend hiring me because I'm not very good. 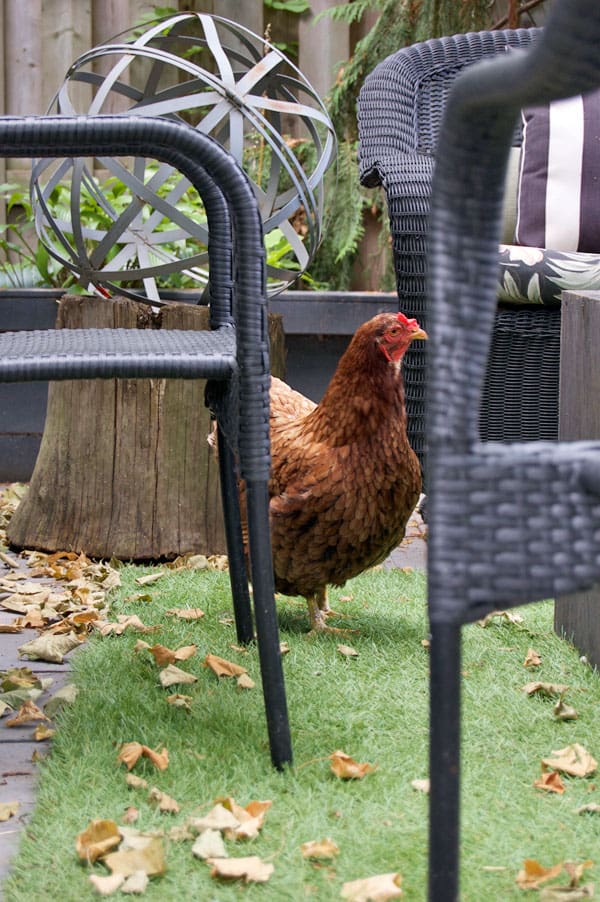 For the first couple of days I let Cuddles roam around the backyard by herself so she wouldn't be bothered by the other chickens. She moved around and scratched in the dirt.  As soon as I put her back in her run she went to the furthest, darkest corner and laid down looking like she was just waiting to die.  But I wasn't going to let that happen.  At least I was hoping I wasn't going to let that happen. 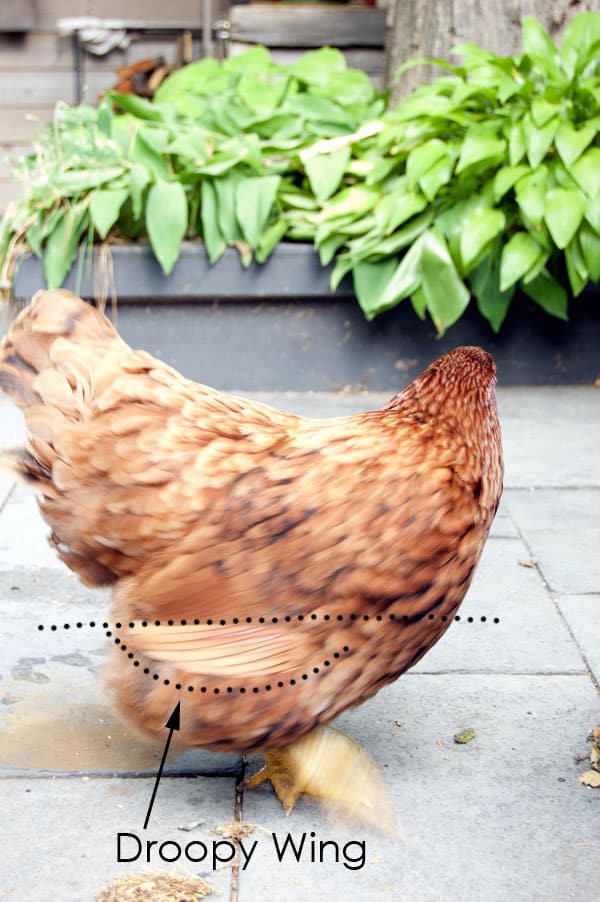 One of the ways you can instantly tell if a chicken isn't feeling well is her wing position.  A droopy wing signals lack of strength and energy.  The same way you get droopy when you're sick, a chicken gets droopy.  The top dotted line shows where Cuddles wing should be.  It should be tucked up nicely against her body.  But it's hanging low.  In this photo she was sick, but not so sick she couldn't ruin my shot by walking away.  So the picture is blurry. In case you hadn't noticed.  I'm good at pointing things out like that to you.

Which brings me to the point of this post.  I've read about a certain hormone therapy you can put a chicken on.  I read about it on Backyard Chickens.  Then, a reader commented that their wife is a vet and uses this hormone therapy on her own chicken.

The drug is called Suprelorin and was originally made for ferrets.  It's an implant that's placed in the chicken's breast, or under the wing.  The implant releases hormones which stop the chicken from laying eggs, therefore preventing infection from internal laying, the end result being healthy hen.  However, there isn't a lot of information on it and it's experimental in chickens.

It definitely isn't anything my regular vet is familiar with. He helps me with Cuddles the odd time doing fecal tests and prescribing me antibiotics for her.  But big farm animals are his thing so he doesn't know what to do with something that isn't likely to hoof him in the head.

I now have a local cat vet who is also a chicken owner and poultry judge looking into it for me.  I'll report back with what he finds out. (he's also starting a magazine dedicated to poultry and other avians which I'll introduce you to later)

So Cuddles is on the mend for the moment, but isn't laying eggs because she probably will never lay eggs again.  Oh, and Josephine is broody once more.  As is Mabel.  And Cheez Whiz is moulting.  So that means I'm getting exactly zero eggs a day.

I wish I had known this whole "no eggs thing" was going to happen all at once.

For one thing I'd have made those last eggs of Cuddle's last a lot longer.  Lipsmack.

*Postscript* After writing this post I got an email from the vet who found out the drug is not available in Canada. Which is kind of heartbreaking. He says it's possible to import the drug, but at a cost of $100 just for an import license (or something like that). Then there's the cost of the drug and finding someone who can implant it successfully and repeatedly. I've asked him to look into it further.