Spring is the time of year tiny baby chicks appear in advertisements, store windows and backyards looking as cute as the feather fluffballs they are. That lasts about 2 weeks, and then suddenly you have an actual chicken. For everyone out there who has been thinking about getting backyard chickens, this is what's involved in taking care of them.

Spring, specifically Easter, is the time that everyone who has ever thought about getting chickens thinks about it ... again.  It's exactly when I got my chickens 11 years ago.  They were an Easter present.  And I did not know a single thing about chickens other than the fact that I'd always wanted them.

I've had several different small flocks of chickens since my first bunch. I started off with what were the chicken equivalent of mutts with some Rhode Island Red, Ameraucana and possibly a bit of actual dog in them. Cuddles was known for coming when I called her and jumping up in my lap. In fact, if you aren't familiar with Cuddles or keeping chickens, you should really read this post about her first.

I'm down to 2 chickens right now; my Black Copper Marans Josephine, and my Blue Copper Marans Mabel. Both are geriatric at the age of 8 and I'm going to let them live out their lives before I get a new flock and start from scratch again.

If you want chickens or just GOT chickens, you probably have some of the same questions I did over a decade ago.

Keeping Chickens: What You Need to Know

Taking care of chickens is similar to taking care of your pet dog or cat. You have to feed them the right food, watch for any health issues and clean up their poop. If you're already rolling your eyes I suggest you stick with PEEPS.

What do they eat?

You can stretch that feed by fermenting it. Fermenting chicken feed is no big deal, it's just adding water to it and allowing it to sit a few days until it ferments. I have a whole post on doing it here. The result is full of good bacteria and nutrition that's more easily absorbed due to all kinds of very sciency stuff. It'll make sense if you read the post.

Chickens will also eat good food scraps from salads, vegetable peelings, fruit, nuts, leftover mashed potatoes and on and on.  They're carnivores so they'll also dive right into meat.  It's why they love to hunt bugs and mice.  Yes.  Chickens are excellent mousers.

Can I get just one chicken to see if I like it?

No. Chickens are very social creatures and one chicken would be painfully lonely.  Starting with 2 chickens is even a bad idea in case one of them dies.  Plan to start with 3 or 4 chickens for a happy, happy flock.

How soon before I get eggs from my chickens?

You'll be waiting a long time to get one from your rooster, but young hens (pullets) will start to lay when they're 4-6 months old depending on the breed. If you want eggs immediately then buy 4-6 month old pullets instead of cute little chicks. The disadvantage to this is you haven't hand raised them so they might not be as friendly and cuddly as one you've raised from day one.

How long do they lay eggs?

The older a chicken gets, the fewer eggs it will lay per year.

Chickens are born with a certain number of egg yolks in them ready to be turned into full fledged eggs.  For the first year they lay almost every day (depending on the breed because some breeds lay a lot more.)  By the third year of laying a chicken will lay less.

Older chickens will lay quite regularly in the spring and then drop in egg production during the rest of the year.

By the time she was 8, Cheez Whiz only laid a couple of eggs a month at the most.  My current 7 year old chickens are each laying an egg every other day  but that's unusual and will likely slow down to a few a month once spring is over.

Do I need a rooster for my hens to lay eggs?

Nope. Hens are like ladies. They walk around with hundreds of eggs inside of them all the time regardless of whether there's a man around. The rooster only fertilizes the egg so the hen can have chicks.  No rooster = no fertilized eggs = no chicks.

Where do you buy chicks?

You can actually buy chicks (usually 1-2 days old), pullets (young hens that are at or close to laying age), or ready-to-lay hens (they've already laid their first egg). There are advantages to all of the options, but for now I'm talking about chicks.

A lot of towns have farm animal auctions.  Also, if you live anywhere near a farm, chances are they have chicks, chickens or fertilized eggs  for sale. Google it.  Craigslist it. Kijiji it.

You can also mail order day old chicks from hatcheries. This is one of the easiest and most popular ways to get chicks but you won't be getting show quality chickens.  You know the pretty pictures of chickens you see of certain breeds on Pinterest?  Hatcheries generally don't provide that type of representation of the breed.

But if you just want eggs you might not care.  Keep in mind if you order from a hatchery there's always going to be a minimum order of many chicks. They need to travel in groups to keep each other warm during shipping.

For show quality chickens that are perfect examples of their breeds, you should get your chicks from a chicken farmer who shows their chickens or whose hobby is breeding for perfection.

How can I tell if a chick is a boy or girl?

That's a tricky one. Some chicks you can tell immediately because they're what's described as autosexing. That means they're an obviously visible characteristic that lets you know immediately if it's a boy or a girl. A boy chick might have a dot on its head and a girl chick a stripe on its back for example (as with the case with Cream Crested Legbars.) You can read this post here on how I sex my chicks.

Where do the chickens live in the winter?

Jamaica. Or Florida maybe depending on flight prices.

Mainly though they just live in the very same coop they live in the rest of the year. Taking care of chickens in the winter isn't very different than caring for them in the summer. Chickens are covered in feathers just like other birds that live outside all year are.  They're very good at keeping warm but not nearly as good at cooling down.

So if you're worried about the weather taking a toll on your chickens, you should be more worried about the heat than the cold. It's also more important to keep a coop dry than it is to keep it warm. Dampness can kill a chicken and create respiratory illnesses.

How do you keep a coop dry?  Make sure you clean out the poop and make sure your coop has a lot of open venting. Yes. Even in the middle of winter the coop should have open venting for moisture to escape.

Chickens also don't like to get drafts so make sure the coop venting is well above where they roost at night. Bottom line, look into what breeds will do the best in whatever weather you have. Some breeds are better with the heat and some are better with the cold.

This post explains exactly how I winterize my chicken coop for my cold Canadian winters.

What if you're not home to put them in the coop at night? Won't predators eat them?  Yes. Yes they will. But there's an easy (and frankly life changing) solution to that. Installing an automatic coop door the way I show you to in this post will save you ALL kinds of worry.

How often do you need to clean the coop?

I clean the inside of their coop where they sleep twice a week and for the rest of my coop and chicken run I use the deep litter method.  This is where you leave all the poop, give it a rake once a week and add more bedding on top.  I clean out the entire thing 3 or 4 times a year, transferring everything to my compost bin and then starting over in the run with a new 5" layer or straw or pine shavings.

What to do with chicken poop

Chicken poop and bedding can go straight into a compost pile or bin. Sometimes I just mound it up and lay a tarp over it.  The poop and straw is a perfect combination of materials for making fast and hot compost.  I do hot composting which produces fully ready compost in one month.  You can read about how to hot compost here.

Sometimes.  But mainly no, especially if you just have a small backyard flock and not a ginormous chicken barn.  No worse than dogs or kids.  And if you do what I say regarding coop maintenance then neither you nor your neighbours will ever smell your chicken coop.

They can be but normally not for long periods of time.  When they lay an egg chickens will sometimes squawk around for a while and it can get LOUD for a few minutes. Chickens squawk after laying as a way to divert the attention of any predators that might be around - not because it hurts. Sometimes they'll get upset at each other or something they perceive as danger and will get loud but other than that they're quiet. Mainly chickens just make cooing sounds no louder than a cat purring.

Can they get sick?

Oh boy. Yes, they can.  Chickens get a variety of ailments. Some I've experienced with my flocks and some I haven't. Common problems with chickens are Bumblefoot, prolapsed vents, respiratory problems and mites.  Personally my flock has experienced Egg Yolk Peritonitis, Fly Strike, general bloody wounds, mites infestations and sour crop.  If you're serious about getting chickens read this post about The Life and Death of Cuddles.  Yes.  This is chicken husbandry.

What else do I need to know?

Chickens aren't an accessory. If you never even thought about having chickens before the great chicken rage of the past decade they might not be for you.  Or they might!  You have to give it careful consideration and know that they're living creatures that you're committing to taking care of. Take these next few things into consideration ...

A Case Against Owning Backyard Chickens

You now know a tiny bit about what it's like to own backyard chickens. Give it the thought it deserves. Now if you'll excuse me I have a couple of geriatric hen eggs to gather and poopy shoes to clean. 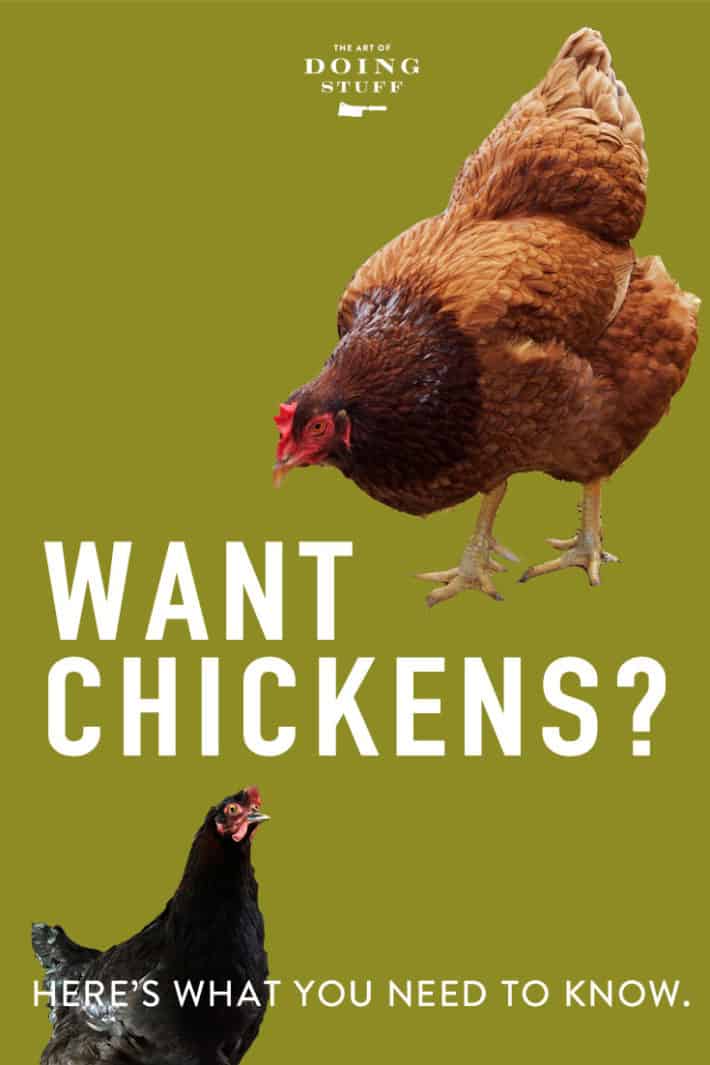