Home » Chickens » HOW TO WINTERIZE A CHICKEN COOP.

HOW TO WINTERIZE A CHICKEN COOP.

Getting a chicken coop ready for winter isn’t as big a deal as you think. For instance 99% of the time your coop isn’t going to need a heater.  With some insulation, good ventilation and a windbreak your chickens will be comfortable even through a Canadian winter. 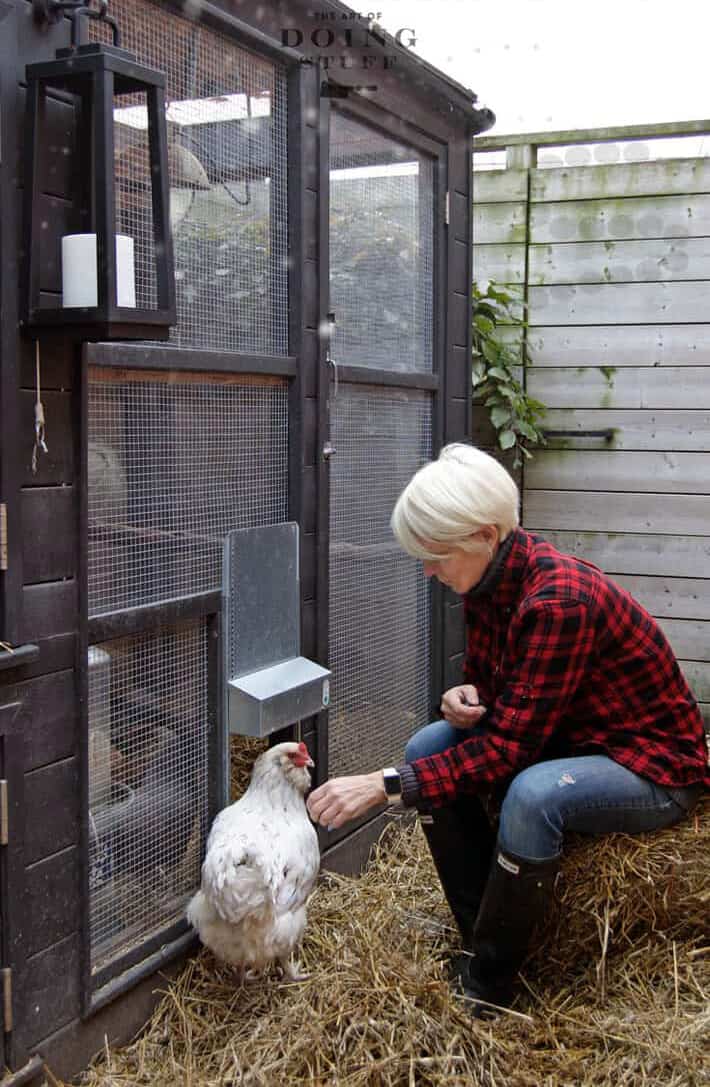 You may be thinking to yourself, Hey, I don’t own chickens so I don’t need to winterize a chicken coop.  And you would be right.  Feel free to skip this post and instead read about how cheese was invented and how to make your own cheese serving board.  I will  wonder about your judgement if you do skip this post, but truth be told, I was already wondering about you.

For those of you who haven’t been around since the beginning of my foray into chickens, I should explain how I got chickens in the first place.  My former fella, an imposing man stretching 6’4″ into the sky, with a tattooed neck and size 13 feet, came home one Easter morning cradling a small cardboard box filled with straw and 6 downy little chicks.

I’d always said I wanted chickens, but I said it the same way one says they want to be taller, or try kickboxing.   They’re fantasy ideas that are nice to ponder but have no basis in reality. 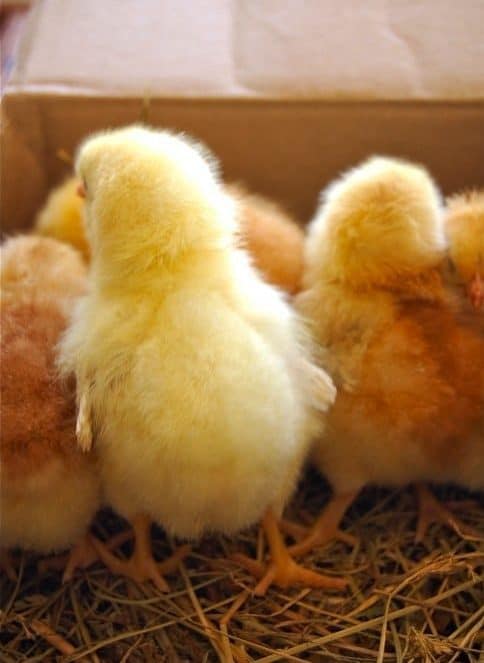 Home he came with the box of chicks, plunked them on the counter and smiled at me, clearly thinking I’d instinctively know what to do with a cardboard box full of livestock.  I did not.  In the next few months I read everything I could about raising chickens in between building a chicken coop and keeping my mouth shut about how much fun I think it would be to own goats.

I’ve had many years of learning about chickens now with the most valuable information coming from experience, not books, the Internet or word of mouth.  One of the things I was most scared of that first year was winter.

I was terrified the chickens would be cold. I mean how could they not be?  I hadn’t considered the fact that chickens are covered in feathers and down and all the other birds in the wild seem to manage to survive without me running out with heaters and sweaters for them.

The truth is, the heat of summer is far more dangerous to your chickens than cold.  Having said that, there are still a few things you need to do to get your coop ready for winter if you live in a colder climate.

How to Winterize a Chicken Coop 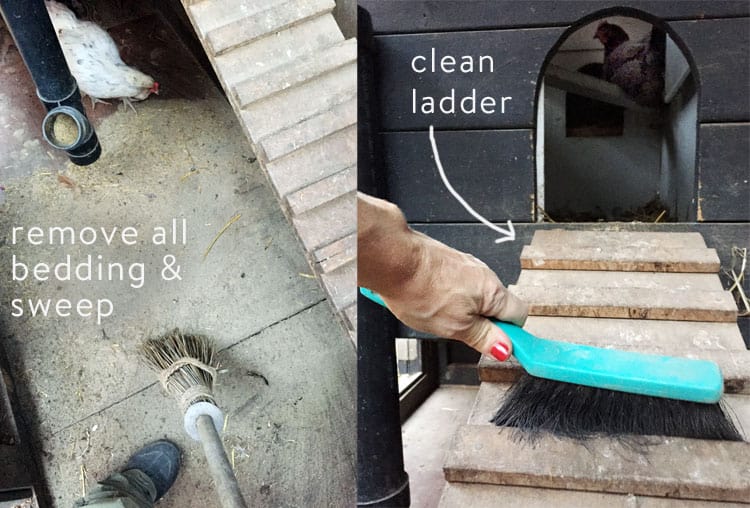 2. Add in an extra-thick layer of bedding. I use straw because each individual piece of straw is filled with air which acts as great insulation.  I start with at least 6″ of bedding in the run and 8″ in the roosting area at the beginning of the winter season. 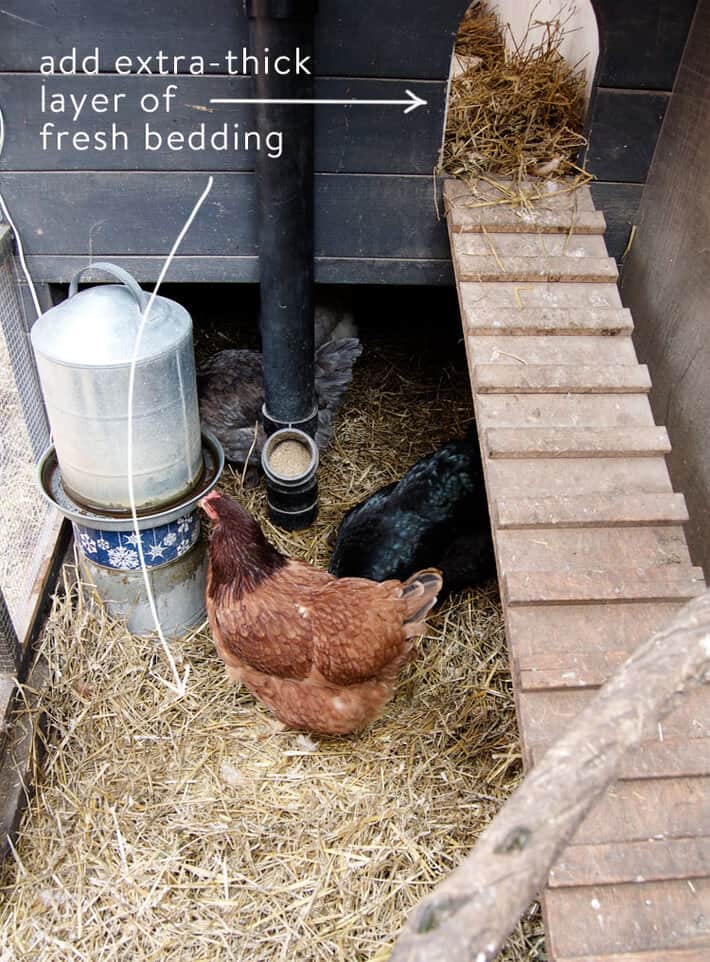 3.  Block out the wind and snow if you have an open run like I do.  Half of my coop is made of hardware cloth which doesn’t provide much of a barrier in the middle of a raging winter blizzard.  For the first few years I tacked up plastic sheeting like this to block the wind and snow, but then invested in plexiglass.  I had pieces cut to size to fit in each of the coop openings that needed to be filled.

If you do either of these things make sure you leave adequate ventilation at the top of the coop.  Ventilation is very VERY important. In fact, a poorly ventilated coop will also kill your chickens more quickly than the cold will.  Without adequate ventilation the coop will become humid which can cause frostbite in cold weather plus the air will be toxic with ammonia from all the poop.  So ventilate.  Got it? 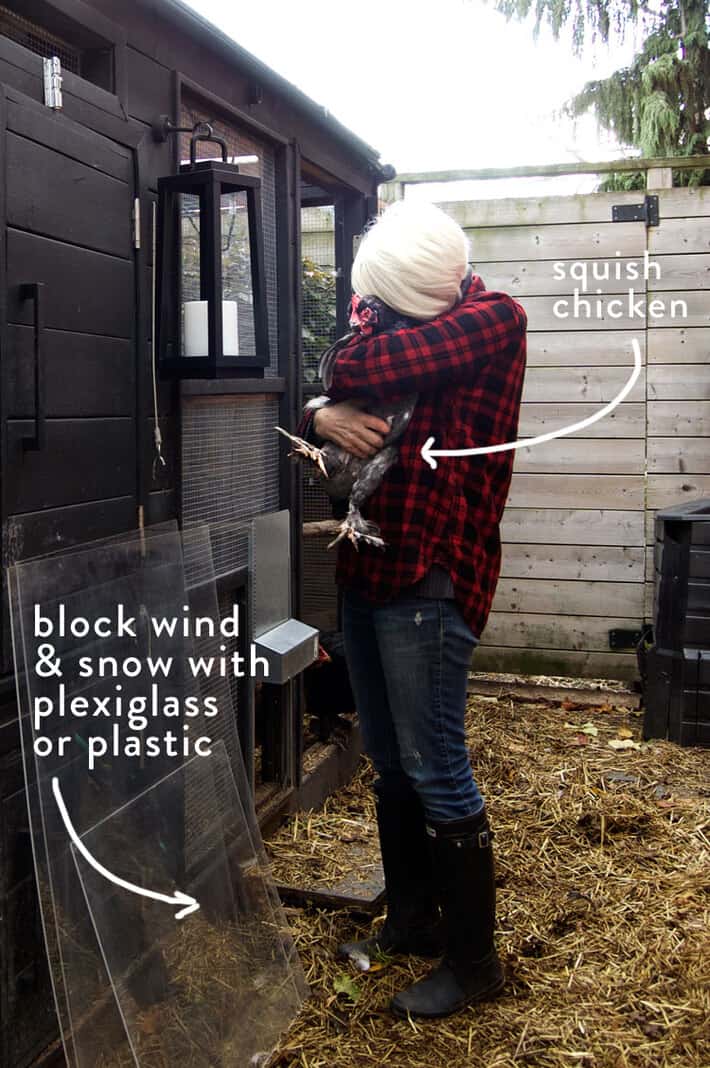 4. Keep your water thawed.  You can buy a variety of different heated water systems for your coop to keep it from freezing all winter, but the most economical way is to DIY your own.  You can either add small outdoor Christmas lights or install an actual low watt bulb into a metal cookie tin.  If you’re in a pinch and don’t have a metal cookie tin handy, you can go the even easier route using this method.  I have a whole tutorial on installing the lightbulb in the cookie tin here. Set your regular metal waterer on top and the heat from the lights is enough to keep the water from freezing. 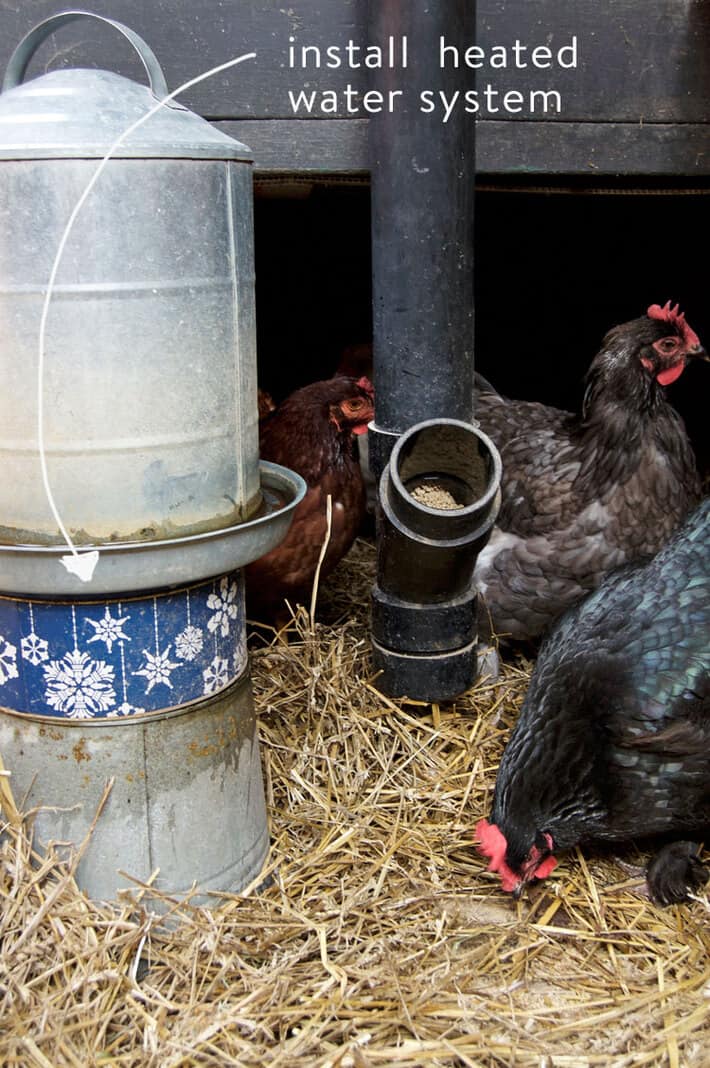 5.  Put your lights on a timer if you want your hens to lay in the winter.  A chicken is triggered into laying eggs by the length of the day.  They need 14-16 hours of light to regularly lay eggs.  Anything under that (like the 9 or 10 hours we typically get in winter) and they will spend all those extra hours sleeping as opposed to egg laying.

Supplemental lighting is a bit controversial with some owners preferring their hens follow the course of nature by getting the winter months off of laying.  If you do choose to use a light to help with continued laying set it to come on prior to dawn.  If dawn is 8 a.m. and dusk is 6 p.m. (10 hours) you need to set your timer to come on at 4 a.m. to get regular egg production.

I don’t do this during the shortest days of winter, allowing the chickens to rest.    I do however use supplemental lighting in the fall and spring.

Chickens are covered in feathers.  They’re fine in the cold.  Don’t fret it.  Keep the wind and snow out of their coop and they’ll be fine.  I *do* have a safe, ceramic, wall mount heater in my coop for nights that get exceedingly cold to prevent frostbite on any areas of the chicken that aren’t covered in feathers like their feet, combs and wattles.

Any nights that will be below 4 Fahrenheit or -15 Celsius, I will turn the heater on to raise the temperature by a just a few degrees. 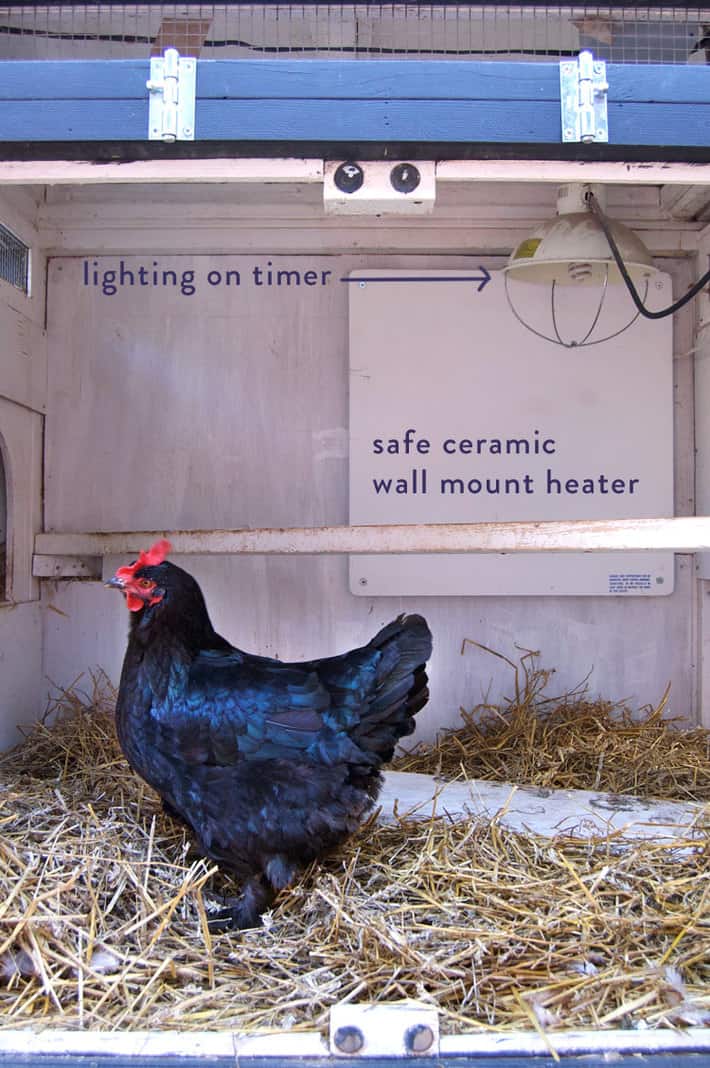 Insulating your coop is a smart idea. I have placed styrofoam insulation between the studs of the ceiling of my coop to help hold heat in at the top.

Straw also acts as a great insulator, and using it on the floors will insulate the coop from the cold ground. 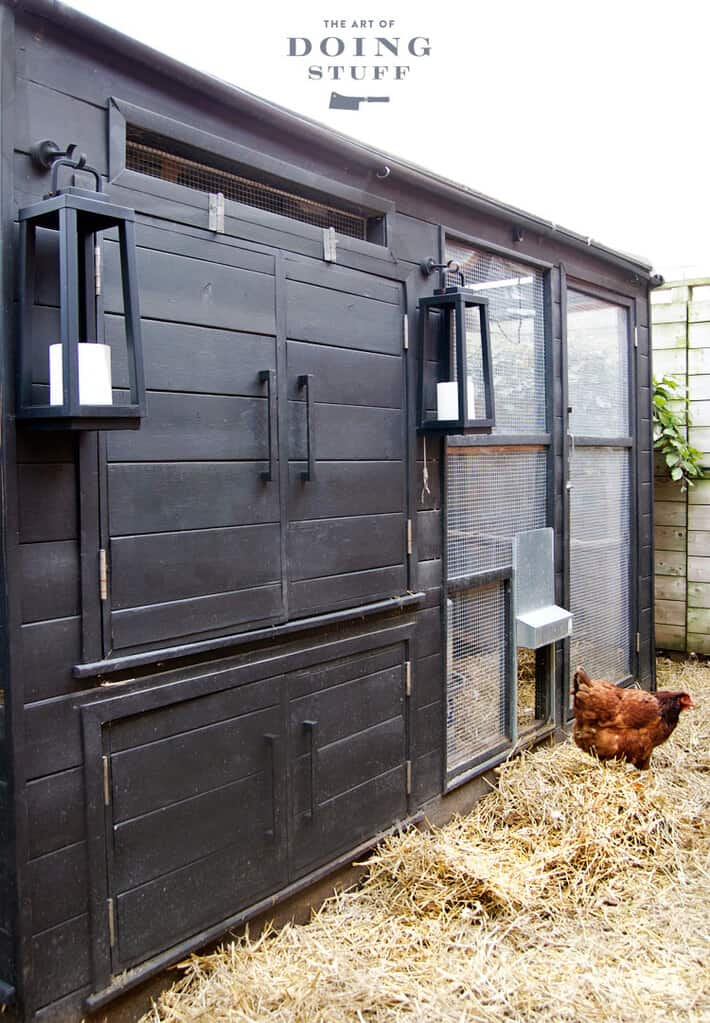 8. Number of chickens per square foot

The MOST important part of keeping chickens in winter is the number of chickens you have per square foot. More chickens = more heat = more moisture.  If the balance is off between your chickens and square footage, the coop will either be colder than you want, or higher in humidity than you want. (a lot of chickens in a small space means they’re giving off a lot of moisture with breath and poop. The high humidity in turn makes the chickens colder, more prone to frostbite and susceptible to respiratory distress.

How many square feet do you need per chicken?

4 square feet per 1 chicken (inside of coop)

If you do all these things you can feel confident that your chickens will make it through the winter comfortably. I wonder what kind of care goats need in the winter?