Home » My Life » Random Stuff » How I’m going to make a million dollars and how you can too.

How I’m going to make a million dollars and how you can too. 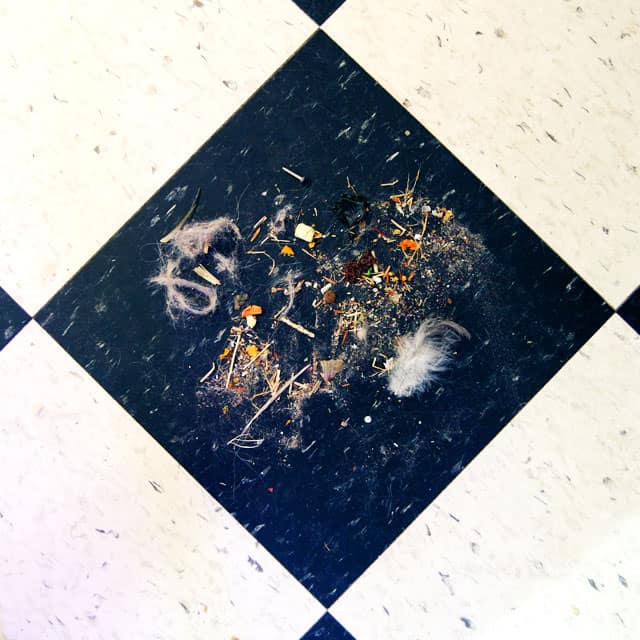 I’ve decided to quit blogging and go into the business of reading floors.  It’s kind of like reading tea leaves, only it actually works, you don’t have to drink tea, plus your house gets cleaner.  And it’s free.  And you don’t feel stupid and duped after doing it.

Floor Sweep Reading is the brainchild of me.  I invented it just last night while sweeping my floor and I’m pretty sure it’s gonna take off.  It’s kind of sciency an’ shit, so it may only make it into like, journals, and boring publications like that at first, but after that it’s definitely going to be something everyone’s talking about.  Plus it’ll to be a real cash cow for me.  I mean, I like blogging and all, but when you come up with an idea like this everything else has to go on hold in your life.

If you’re any sort of normal human being, you’ve been sufficiently whipped into such a frenzy by now, that you can’t wait to hear what this Floor Sweep Reading actually is.

Well, you sweep your floor, take a photo of your pile of dirt and send it to an accredited Floor Sweep Reader for analysis.

I accredited myself as an Official Floor Sweep Reader just last night, and as luck would have it I’m the only one in existence right now so a) I’m your only option and b) I am your only option.

You have to send me money too.  That’s what makes this a cash cow.

Once an Official Floor Sweep Reader (me) receives your photo (and money) they’ll analyze it using state of the art technology developed over the past half hour in my backyard with some drunk neighbours.  All results are confidential, and emailed back to you using my laptop which, although not password protected is usually pretty secure since there’s always a cat sitting on it.

O.K., I’m actually going to change the name of my invention right now.  I know I said it was called “Floor Sweep Reading” but it just occurred to me if I call it “Floor Dirt Reading”, then we can shorten that to FDR, which will be easier for people to remember  on account of its association  with the famous FDR fuel pump out of Izmir, Turkey.

As an experienced business person, schooled mainly by reading the Tweets of marketing bloggers, I know that you like to get something for free before you’re willing to pay for it.

Here’s a sample of what you can expect to receive after you send me your photo.

The first step of the analyzation: 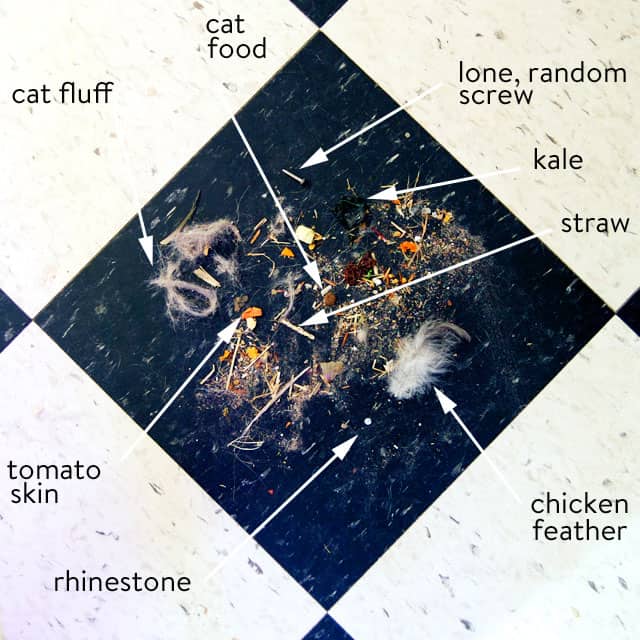 I see this person cuts food up  but doesn’t eat it. They throw food on the floor.  Mainly  tomatoes and kale. This person could be a violent vegetarian.  Possibly a disgruntled vegan.  Unless those things were dropped on the floor in which case they’re just tired.  An indication that this one’s a real partier.  Would benefit from the FDR detox kit, selling for only $79.99.   In the past they’ve encountered a cat. It probably crossed their path.  This is a bad omen.  Which isn’t a surprise because the chicken feather in the photo is evidence of this person’s interest in voodoo.  I predict this person will suffer a minor glue gun injury while attempting to reapply a rhinestone to a pentogram.  And a shelf will fall down in the near future. Maybe their shelf.   All of these things will happen on a day that ends with a “y”.

Interested in becoming an official FDR analyzer?  I don’t expect you to understand all the scientific jibber jabber behind how I do all this so I won’t even try to explain it right now, but suffice it to say you can be a little loosey goosey with your results and still look like you know what you’re doing.  Ask about my accreditation package so you too can take advantage of this booming and revolutionary method of predicting the future and reading the past.

I just realized I said earlier that you wouldn’t feel stupid and duped after doing this.  That’s because this is real. Not like those magic tea leaves or palm reading.   Also it’s not free.  I lied about that.

Floor  Dirt Reading.  Watch for it on the cover of People magazine soon.

Have a good weekend.  I probably won’t get to say that to you again, since I won’t have time for you anymore. Because I’ll be rolling in money soon.  Or floor dirt.