You’re going to plant potatoes this year are you?  No?  Well you should. Potatoes are an easy crop to grow and they have the added bonus of being a surprise crop with all of the growing happening underground and out of sight.  Harvest day is like the best Christmas morning ever because all your gifts are made out of carbs.

If you’re looking for the short version of how to plant potatoes, I’ll save you from reading through this whole post. Throw them in the ground.

First on the list of crap you have to know about potatoes, is you’re going to be planting something called “seed potatoes”. That’s what potatoes grow from.

What are seed potatoes you ask!

Seed potatoes are potatoes. That’s all. They’re just potatoes. What makes them the thing you want to plant with as opposed to some potato you found on the road that’s fallen off the back of a garbage truck is seed potatoes are guaranteed to be disease free.

They’re sometimes grown in a special location (on top of a hill that’s at a higher elevation than the surrounding area) to help prevent any disease from getting on them. You buy them in a bag just like you do regular potatoes, but these potatoes have been sitting around since last year and are a bit wrinkly and just ready to sprout.

So a seed potato is a disease free potato that’s about to sprout. Got it?

I’ve often used my potatoes from the previous year as my seed potatoes, but try to buy new stock every couple of years. THIS was one of those years.

In the bed highlighted above, that means I need 45 seed potatoes. OR DO I???

I do not. Because as it turns out you can turn 1 seed potato into 2 or 3 easily – thereby doubling or tripling your seed potato stock in a matter of minutes.

By chopping them in half. Or thirds. Or even quarters.

You just have to make sure each piece of potato has at least 1 eye. I prefer to leave 3 eyes in each section but that’s not completely necessary, it’s just a good practice.

You can see the amount of eyes your average seed potato has. A LOT. You can see 6 eyes on this side of the potato alone. Just two more and it would be a spider.

So how do you cut them? Any way you can that keeps the eyes.

You don’t have to cut straight across. To get 3 eyes on each half of this potato, I cut it in a bit of a zig zag.

Once the potatoes are cut you’re supposed to let them dry out until the cut area gets leathery. This heals the wound and makes it way less likely for the potato to rot or get disease.

HOWEVER – having said that, there are plenty of people who throw the potatoes in the ground without drying them at all.

I’m a staunch rule breaker in general but not when it comes to the important things in life, like potatoes.

So I let my cut potatoes dry out and get leathery before planting them. Which is the perfect time to chit them.

What the stink is chitting potatoes?

Chitting potatoes is just giving them a bit of a head start on growing. I’m sure you’ve pulled a potato out of your drawer, bag or bin at home only to be confronted by a soft brown thing with long tentacles reaching out to grab you.

Your potato sprouted. That’s what chitting is. You’re encouraging your potato to sprout by giving it heat and light.

If you chit your potatoes before planting them you will get to harvest them earlier.

Just lay them on a screen so they get air underneath or pop them into an old egg carton and put them near light to encourage sprouting. You want the eyes of the potatoes to start to grow, but you don’t want them to be SO sprouted that the sprouts break when you plant them. 1-2 cm long sprouts is ideal for planting.

You can chit potatoes whole seed potatoes or ones that you’ve cut to increase your stock.

This year I read about dipping them into wood ash to help them heal and dry more quickly so I gave that a shot just for fun.

I don’t really think this is going to have any impact on my potatoes at all, but if you’re cutting your seed potatoes and planting them in the same day it’d be a good, quick way to dry them out and protect them before shoving them into the dirt.

After a couple of weeks the potatoes will be leathery and dry, ready to plant.

When to plant potatoes

2-4 weeks before your last frost date.

The last frost date for my zone 6b garden is predicted as May 10th. That makes my potato planting dates from April 10th – May 1st.

So are you going to plant them in potato towers?

NO. Forget everything you’ve read about potato towers. They don’t get you any more potatoes than you would get if you planted them in the ground or in straw. That’s speaking from experience and … well, just logic.

Potatoes don’t produce huge crops because you happen to plant them in something 4′ high. A seed potato will only produce so many potatoes over a season no matter what. Planting them in something called a tower doesn’t change that.

Having said that you’re going to find plenty of posts, people and hucksters and genuine fans of potato towers.

How to plant seed potatoes

I don’t generally “hill” my potatoes. Hilling is when you plant your potatoes and pile more soil on the plants once they’ve reached about 1′ high. You do this a couple of times in a season. The logic is that potatoes grow upwards and hilling them gives more room for potatoes to grow – similar to the theory of a potato tower but not as extreme.

I’ve never noticed any huge difference in my harvest from hilling so I don’t do it. I do however, plant my potatoes fairly deep at around 8-10″.

Dig an 8″ deep trench and drop the potatoes in 1′ apart, with the eyes facing up. Pull some soil back over the potatoes so they’re covered by a few inches and wait for them to sprout. When they do, cover them with more soil, and so on over the course of the summer until the trench is filled back in.

In the past few years, I’ve developed a different method that’s been working well.

I loosen the soil a bit with a garden fork (no turning it over, just shove the fork in, lift it a tiny bit and then slide the fork right back out the way you put it in.) Once I’ve aerated the soil a bit, I take a 2″ x 2″ wood stake, shovel handle or a piece of plastic pipe and push it into the soil as deep as I can at 1′ intervals.

I swirl the stake around a few times to make the hole bigger.

Drop the piece of seed potato in the hole and knock some soil into it. Over the course of the growing season the hole just fills itself in. If it doesn’t I just rake it in.

Seed potatoes that have been cut work best for this method because they’re smaller than a whole potato and slip into the hole easily. The hole will be wider at the top and narrower at the bottom so you need a potato that will fit all the way down until it touches the soil at the bottom.

Probably the easiest way I’ve ever planted potatoes with the least amount of soil disturbance. Slide a shovel with a long blade (8″ – 10″) into the ground and wiggle it a bit to create a pocket. If the soil is wet the soil will stay put and you can slide your shovel out and drop the potato in and push it to the bottom of your hole.

If the soil is dry, keep your shovel in the ground with it pushing back the soil. Then slide the potato in with your hand to the bottom.

A few inches of soil will fall back in on itself. As the potatoes grow you can pull more soil over if you need to, but it usually just falls back in naturally.

Throughout the season if you’re going to hill your potatoes then hill them. If you don’t hill, check to make sure none are showing above soil level or they’ll turn green. If potatoes are peeking out, just cover them with some soil.

Watch out for the number one threat to potatoes, the Colorado Potato Beetle. When you see them pick them off by hand and either step on them or throw them in a bucket of water. Either way it’s gross.

After the potato plants have flowered cut back on their watering. Yes they need some water to live, but don’t water them as regularly as you would during the vegetative stage. This drying out period will help the potato to toughen up.

How and when to harvest potatoes

When you’ll be harvesting your potatoes will be dictated by what of the 3 kinds you planted. There are early, mid and late season varieties.

Early season potatoes can be harvested 60-80 days after planting.

Mid season potatoes can be harvested 80-95 days after planting.

Late season potatoes can be harvested beyond 95 days. Anything from 100-130.

Harvest your potatoes when their vines die back. This means they’re done growing and have started curing and hardening up.

To harvest use a shovel or a fork to loosen the soil around the potato plant. If your soil is loose enough some varieties let you pull the entire plant up with all the potatoes still attached. Chiefton Red is especially good for this method.

Other potatoes aren’t as cooperative and you need to dig through the soil with your hands or shovel them out. If you shovel, no matter how hard you try you’re going to slice a few potatoes in half. Don’t worry about it. You get to eat those potatoes first. Any sliced or damaged potatoes should be eaten first because they won’t store long term well.

Once the potatoes are harvested you have to berate them. Call them names. Put a reindeer hat on them and post it on Instagram. Do whatever you need to do for them to ensure they develop a thick skin.

You’ll never got those conditions exactly so don’t worry. Just get as close as you can to that. You might store them outside on your porch, or inside. Whichever fits the criteria for curing best.

Ideal storage conditions for potatoes are 40 F in an area with 90% humidity. So how do you do that?

I have an unheated mudroom that I store my potatoes in. I keep the room as close to 40 as I can by using a space heater and have them in wicker baskets in a closed cupboard which keeps them both dark and helps maintain humidity.

Other possible places for storing homegrown potatoes are:

I have a whole post on long term storage for common vegetables like carrots, squash and onions here.

Or, like I said earlier. Just throw them in the ground and wait for carb Christmas. 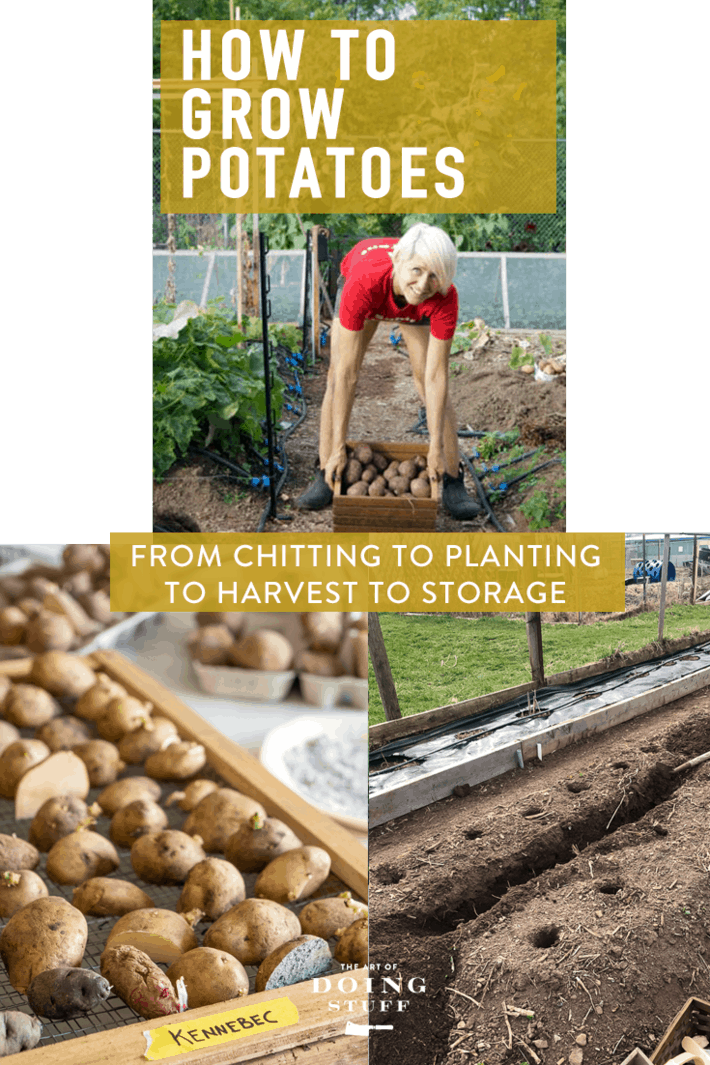