O.K., good! You composted. You threw a bunch of stuff in a pile and it appears to have turned into something other than leaves and food scraps. It looks ... composty. But how do you know if your compost is really ready to use in the garden? By testing it. Here's how ...

I mailed that letter 2 years ago and have yet to receive a response from the hens. Actually that's not true. I think out of spite, the chickens are pooping more than ever. They poo on their roost, they poo on their grain scoop, they poo in their coop.

Because of this unfortunate horror that occurs approximately once every minute, it didn't take me long to figure out I'd better find a use for this stuff.

On a whim when I first got chickens a decade ago  I threw all of the chickens' bedding (including all of their poop) into a compost bin and waited. Not a lot happened. Then I discovered hot composting and all KINDS of stuff happened. I can now turn a bin of straw and poop into useable compost in a month. You can read about how to hot compost here, and you do NOT need to have chicken poop for it.

It looked O.K. but for the first few years of using it I had no idea if my compost was actually ready.  Was it done? How could I tell.  Well, it looked like soil so I figured that was a pretty good indication. And it is!

But there are a few other ways to tell if your compost is really - compost.

How to Test If Your Compost is Ready to Use.

There are a few clues as to when your compost is ready to be used in the garden. It has a sweet sort of smell to it like black earth and it's crumbly.

But sometimes it doesn't look like that. Sometimes after months it still looks a bit rough with pieces of identifiable stuff like sticks or straw.

If it SMELLS like soil though, your compost is probably ready to use no matter how lumpy.

One year I was at my deepest depths of compost despair because my compost smelled but didn't look like soil.  I strongly considering getting rid of the chickens and moving to a shiny skyscraper with a quick witted doorman named Charles. But then I got some secret information.

I went to a talk from a local organic CSA farmer. These people are SERIOUSLY into the science of agriculture. Plan B Organics is run by 2 brothers and a wife who not only farm but have travelled to Mexico to learn about generations old organic farming practices.

During this talk I grabbed onto one tiny piece of information and locked it into my brain.  (the stuff about calcium absorption, hormones, plant DNA and such tried really hard to make it into my brain but ricocheted right off unfortunately)

The tiny piece of invaluable information?

So of course I experimented with this to test it out.

This was the compost in question. It heated up and decomposed like crazy for a few weeks then it just clunked out. It could have needed more nitrogen, more oxygen, more water or more carbons. Or ... it could have been be ready. I just didn't know.

So the experiment commenced with me throwing some compost in a pot,  sticking a few radish seeds in it and seeing if they grew. Of course I didn't use my special multicoloured radish seeds -  I'm adventurous, but I'm not an idiot - I used my regular, every day Raxe radish seeds.

After you get a few seeds in there, cover them up with a thin layer of compost.  (You can even just throw the radish seeds in your compost pile if you don't plan on turning it.  No pot needed.)

To round out the great radish experiment I also did a test group in a pot of regular potting mix.  And then I sat. And I waited.

In the lefthand corner weighing slightly less than a malnourished wood mouse, we have the radish seeds in a pretty sketchy looking partially broken down compost mix. On the right, wearing a plastic pot, radish seeds in potting soil.

I suspected the seeds in potting soil were going to win this fight.

So imagine my surprise when 5 or so days later, this is what happened ...

The radish seeds in the questionable looking compost (on the left) sprouted several dark green radish leaves.  The potting soil, on the other hand sent up one measly germination with a couple of more on the way.  Plus the leaves on the one germinated radish seed had a yellow cast to them.

Even though my compost was full of sticks and straw (and poo), it was the store bought potting soil that turned out to be crappy.

There you have it. The best way to check if your compost is ready without using any testing equipment or pH strips. All you need is a radish seed and a few days.

Now if you want an actual radish, that's going to take a bit longer. 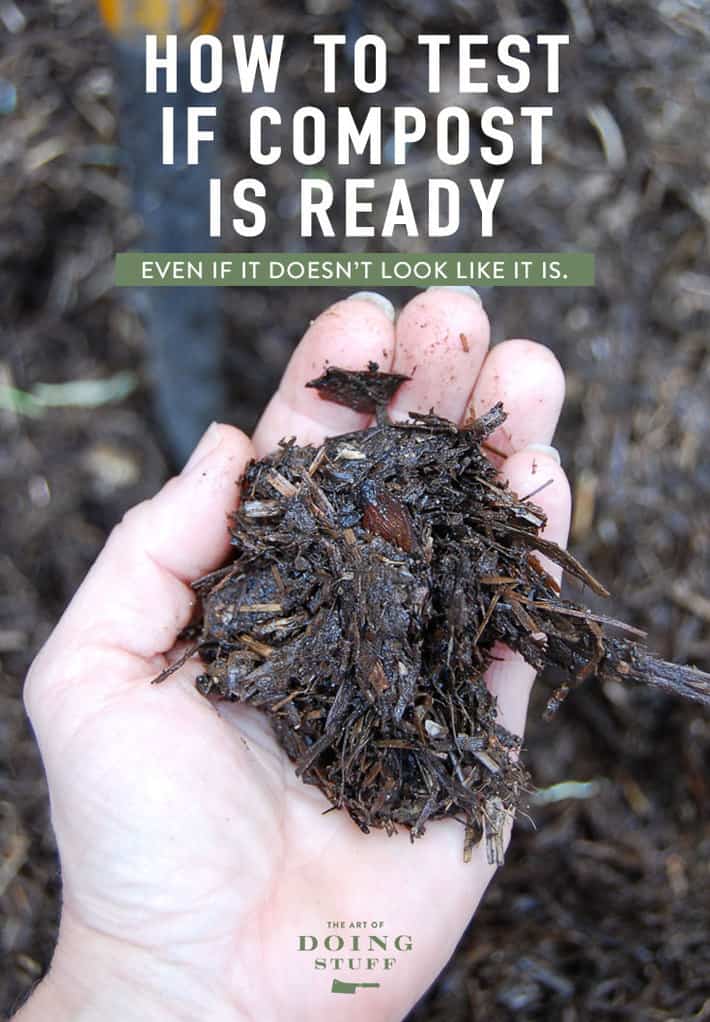