Have a grungy cast iron pan you inherited that you're afraid of? No need to be.  Cast Iron surgery coming your way!  How to clean and season a cast iron skillet. 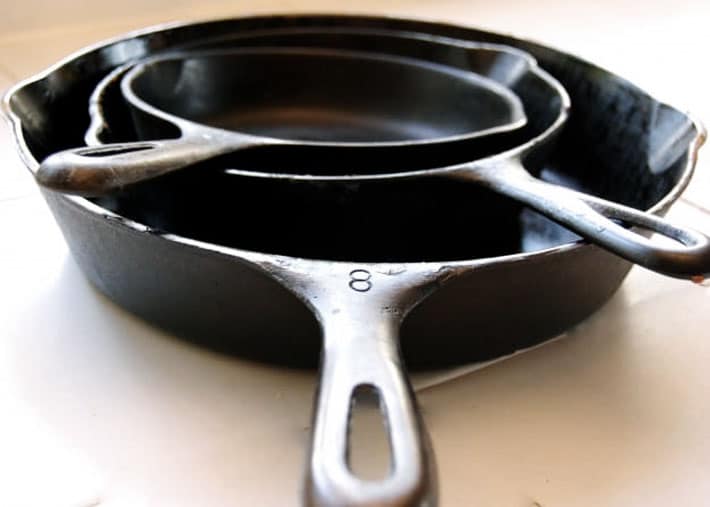 If you search the Internet you'll find a multitude of ways to season a cast iron pan with a variety of temperatures and materials. All of them involve rubbing the cast iron skillet with some type of oil and heating it in the oven (or even on the stove).

So a few years ago with a bunch of cast iron pans from a garage sale in hand, I tried them all to see which method was the absolute best.  Cause that's what I do in my spare time.  Well, that and slow dance to The Carpenters in my kitchen.

I already had a method for seasoning cast iron that that I liked but I figured I might as well see if there was anything better out there.

This same reasoning led me to abandon my regular jeans in favour of a pair of jeggings.  The experience was horrifying all around.  I'm back to jeans.

Almost all of the Internet suggestions say to coat the cast iron pan with whatever you're going to coat it with and then place it in the oven, upside down, over tin foil.  This allows the extra oil to drip off, so in all experiments I used the upside down method.

I tested each of them.

All of these were recommended methods on the Internet.

The only time you should use a vegetable based oil (solidified oil, shortening is best) to season a cast iron pan is if you are vegan or vegetarian.  Using a vegetable based product for seasoning cast iron leaves a sticky residue. It's pretty awful.

By the way you can also buy a pre-seasoned cast iron skillet and avoid all of this trouble.  I've never used one so I'm not sure how well they work.

How to Season a Cast Iron Pan 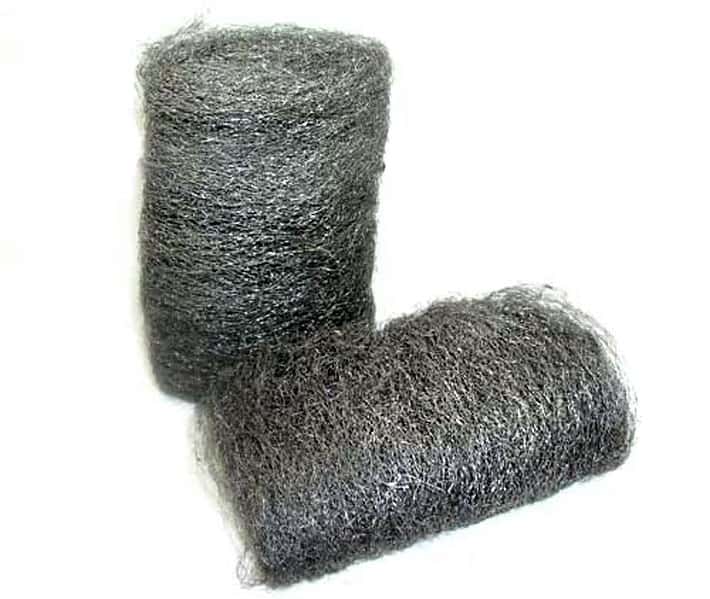 2. If steel wool isn't doing the trick you can place your dirty, disgusting, rusty cast iron skillet into your self-cleaning oven for the shortest time period allowed.  Remove and wipe clean.

3. If you don't have a self cleaning oven, coat your cast iron skillet with oven cleaner, put it in a plastic bag and leave it overnight.  Clean it in the morning.

4. Once your skillet is prepared for seasoning, grab yourself some lard or shortening. Remember, only use shortening if you absolutely have to due to being a vegetarian or vegan.  And honestly, even then ... just use lard. I won't tell anyone other than the Vegan/Vegetarian association of the World. 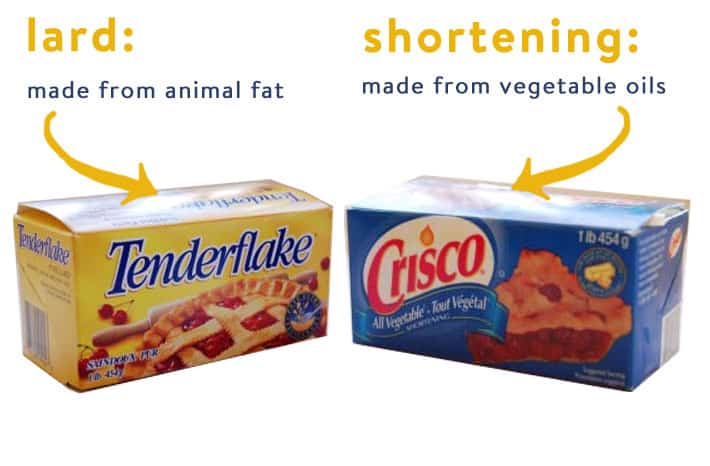 5. Take a small amount of lard and rub around the bottom and sides of the pan.  You don't need a ton. 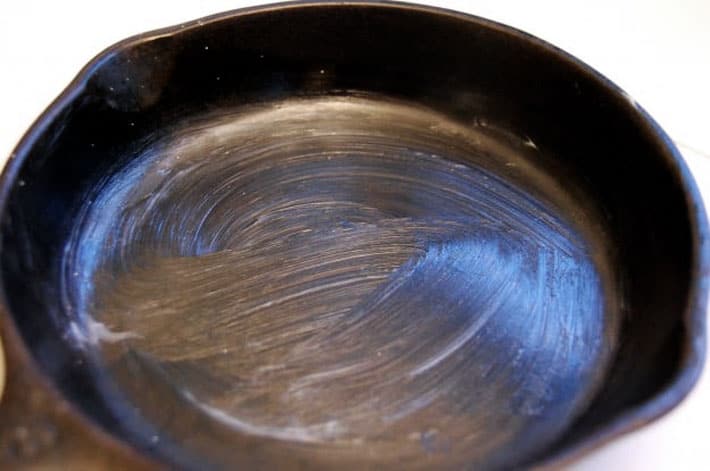 6. Line the bottom rack of your oven with tin foil.

7. Place your greased cast iron skillet over the foil upside down (so the drips will be caught by the tin foil) 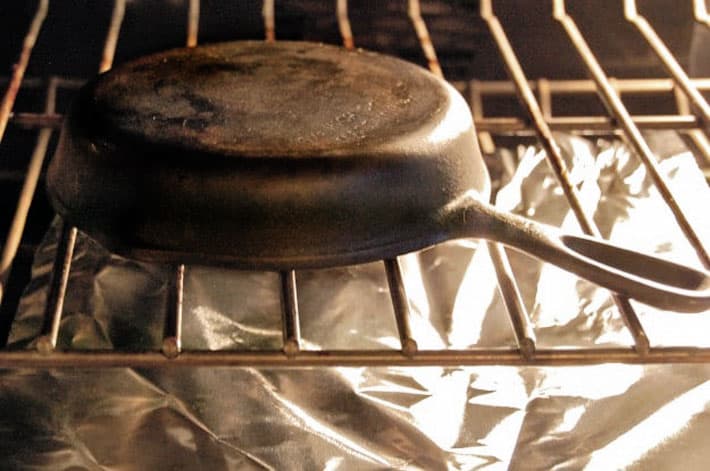 9. When your timer goes off, turn your oven off and open your oven door part way.  Cast Iron has to cool down gradually.  If you bring it right out into the much cooler room the skillet might crack.

You might need to season a brand new pan a few times before you're satisfied with it.

I have a good technique for cleaning a horrifyingly gross wood cutting board in case you have one of those  hidden too.

Does seasoning cast iron produce smoke?  OH YES!  Your house will fill with smoke and your eyes will water so make sure when you season cast iron your windows are open and your exhaust is on.

How often should I season my cast iron pan?  Do your initial seasoning whether it's a new or a used pan.  If you cook in it regularly you shouldn't need to season it again! Clean it gently and don't scrub it or you'll scrub off the seasoned coating.  If you do scrape it off because you maybe burned something in your pan and scrubbed hard to clean it, you will have to re-season.

Will my pan rust? Cast iron only rusts if it's left wet or damp.  Dry it thoroughly after washing and you're fine.

What's the deal? What's so great about cast iron? Good question. Cast iron lasts for years.  Like I'm talking 100 years if you take care of it (by cooking in it).  Cast iron is naturally non stick (once you season it) and only gets better with age.

Does Cast iron add iron to your food?   Yes! It really does.  Weird, I know. In fact it adds significant amounts. The longer you cook something in it then the more iron is absorbed. So a quick cook frying an egg won't transfer lots of iron but slow cooking a batch of spaghetti sauce in cast iron will.

What temperature to season cast iron? 500°F for 1 hour is the method I've always used. 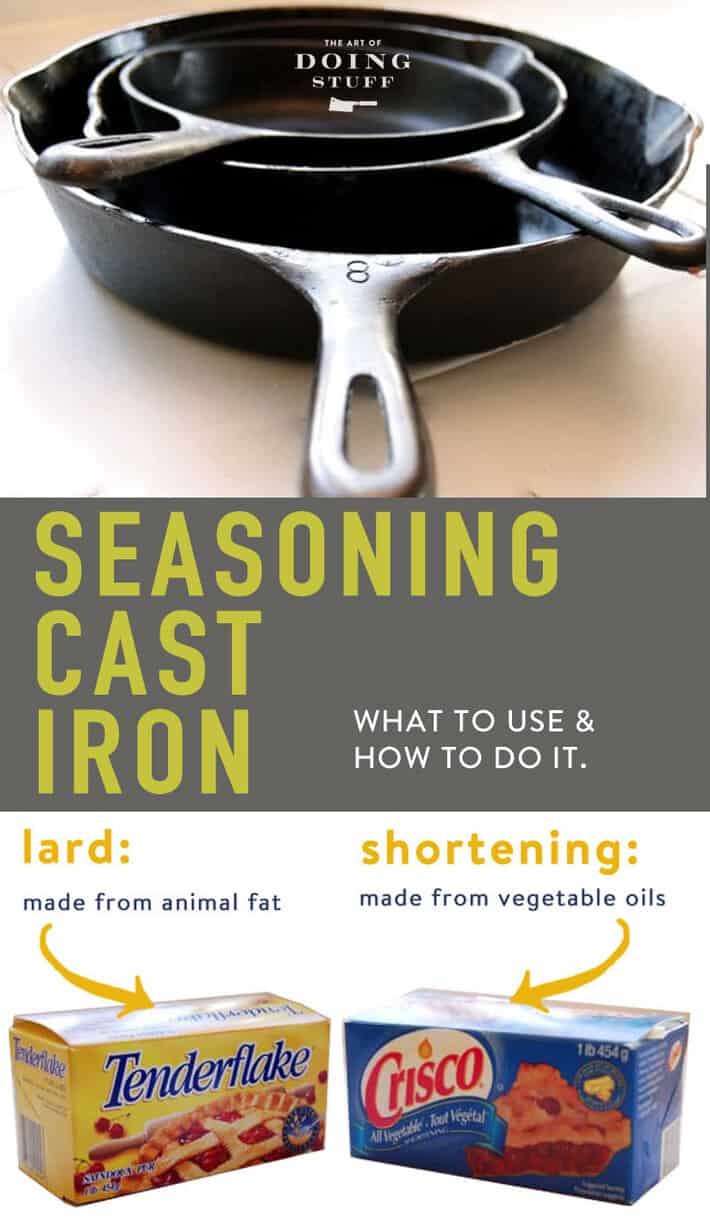