We've lost many life skills over the years.  How to make butter, drive a team of horses, use a coffee maker that doesn't come with prepackaged pods ... but one of the most distressing things is NO one knows how to keep bread fresh anymore.  Here's the how and why. 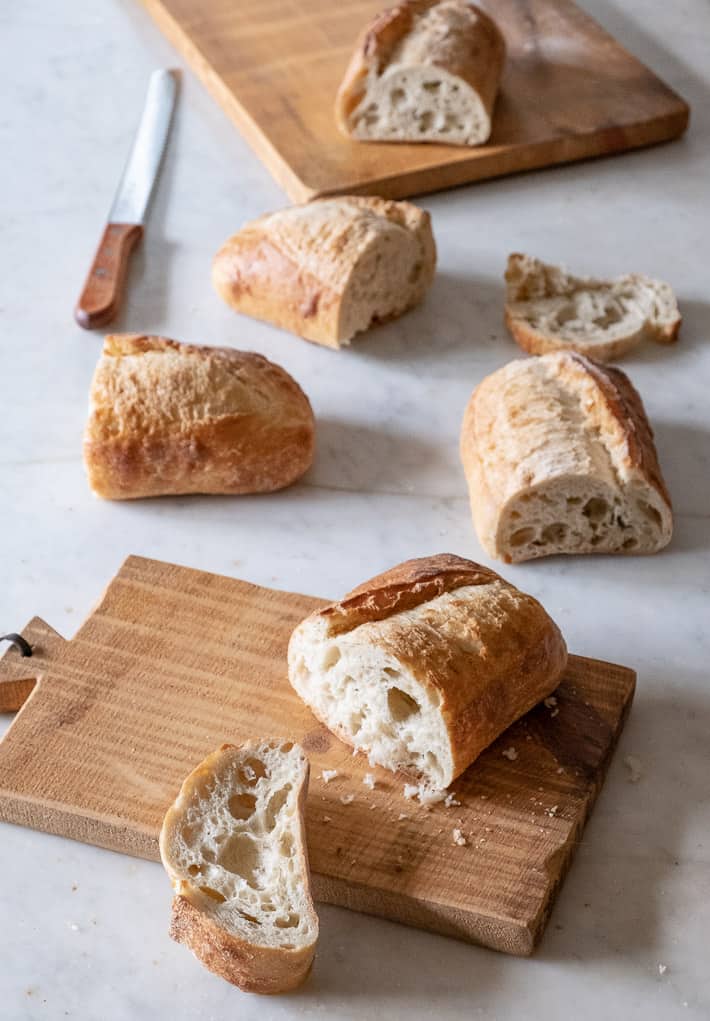 In the 1930s there was a very large blip in the bread eating world that we're just starting to recover from. Way back when, bread came like the bread you see in the photo; whole loaves of crusty, prone to get stale fast, bread. It's the kind of bread most of us are eating now.

The "bread blip" occurred in the 1930s when The Continental Baking Company started selling the greatest thing since sliced bread. Actually it was sliced bread.  Wonder Bread made it's nationwide debut throwing women into a panic over this newfangled sorcery.  HOW could a loaf of bread that's already sliced stay fresh?

Turns out, it's completely possible as long as you remove all the nutrients and minerals and basically anything good from the flour by processing it until it's a mere shadow of its former self.  Highly processing flour creates a super-soft almost devoid of nutrient, marshmallow-like bread that lasts forever without drying out.  Yay?

A decade or so after its introduction, the government forced the makers of Wonder Bread and other extremely processed foods to ADD nutrients and minerals back into the bread to give it at least some nutritional value.

This is why you'll see bread that says "enriched" on it. Enriched??!!  That's great!  It gives you the impression that there's even MORE nutrients in it the bread!!!  There aren't. They've just added in some synthetic nutrients to make up for the real ones they took out. 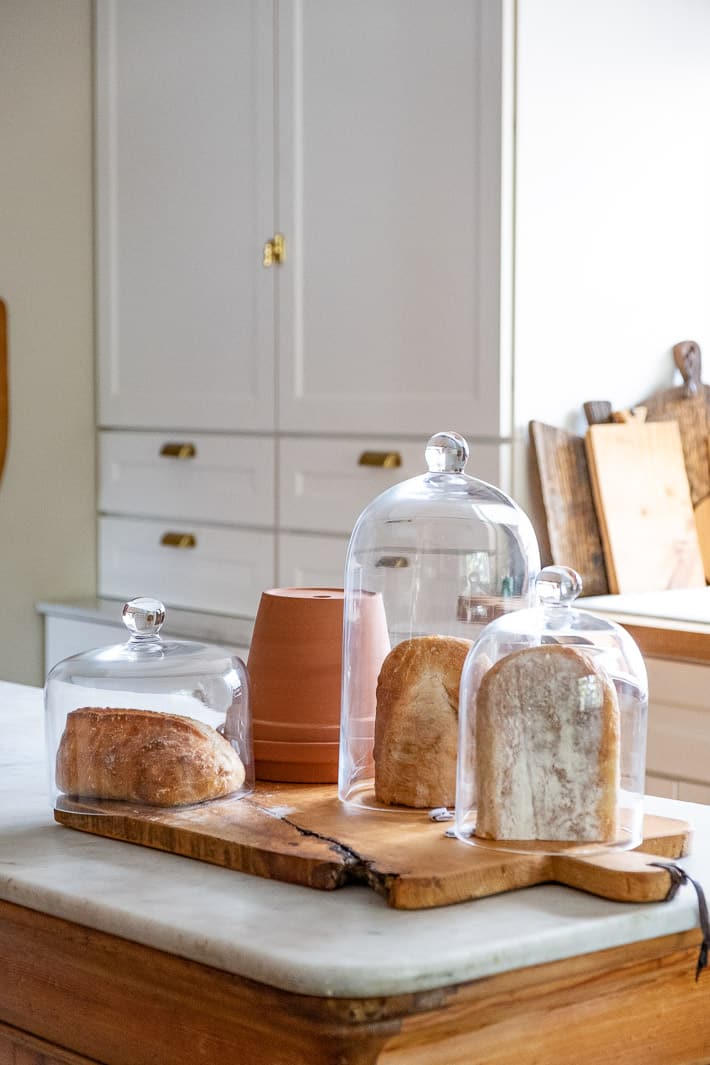 So there you have it. That's why you don't know how to store real bread.  Sliced bread took over the world and ruined your bread storage life skill, turning you into an inept drooling moron.

Wonder Bread - the worst thing since sliced bread. Everyone started buying it because it was soft and plush and lasted forever without going mouldy or stale. There was nothing to storing it. You just left it in its plastic bag and it'd stay fresh in your kitchen for as long as a typical tax evasion jail sentence.  But in the past 20 years or so (I have completely made that number up) we're getting back to eating - and I hate this phrase - real food. That means loaves of crusty, unsliced bread.

And not a single one of us knows how to properly store it to keep it fresh beyond one day.  NO ONE.  Not even myself.  So I did an experiment 2 weeks ago involving several loaves of bread and 8 different storage methods. 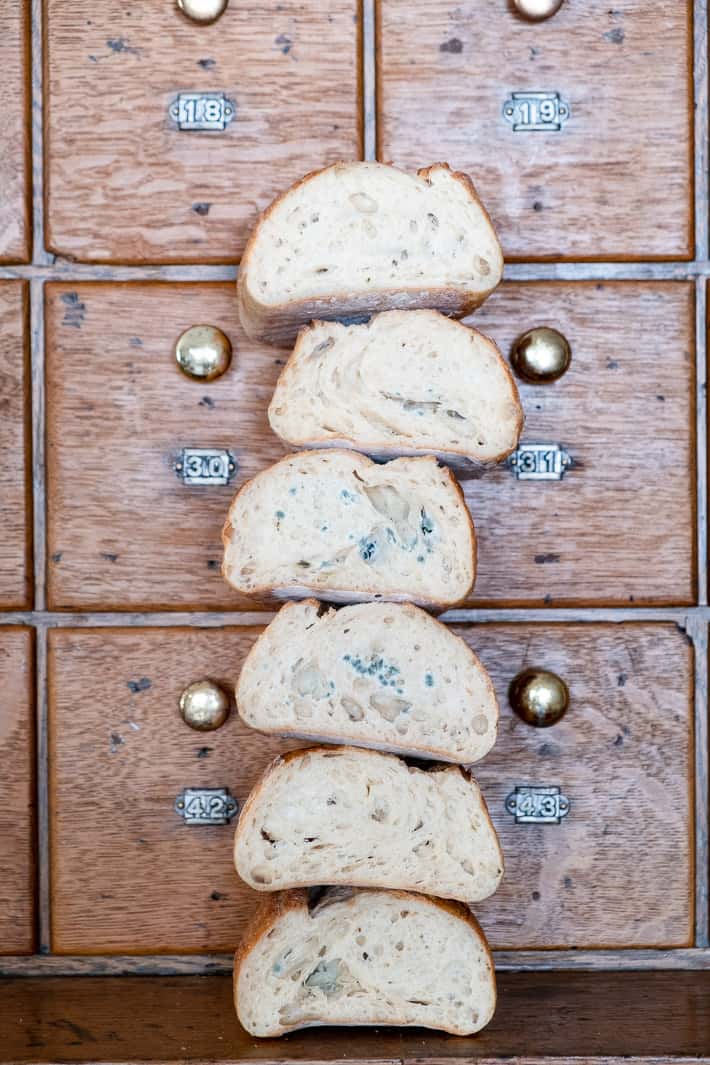 Here's how the methods worked.

Each loaf was cut in half and stored in one of the 8 designated places.  I measured their moisture with a moisture meter, but it turned out that wasn't really necessary.  Mould meant the bread was too moist with not enough ventilation, hard as a rock meant too dry with too much ventilation.

The bread under glass with no ventilation got mouldy within 3 days.  It was stored with the cut end down to prevent moisture loss with probably also accounted for the quick mould production.

This method didn't work. The crust became soft almost immediately after going under the glass domes and mould formed within days. 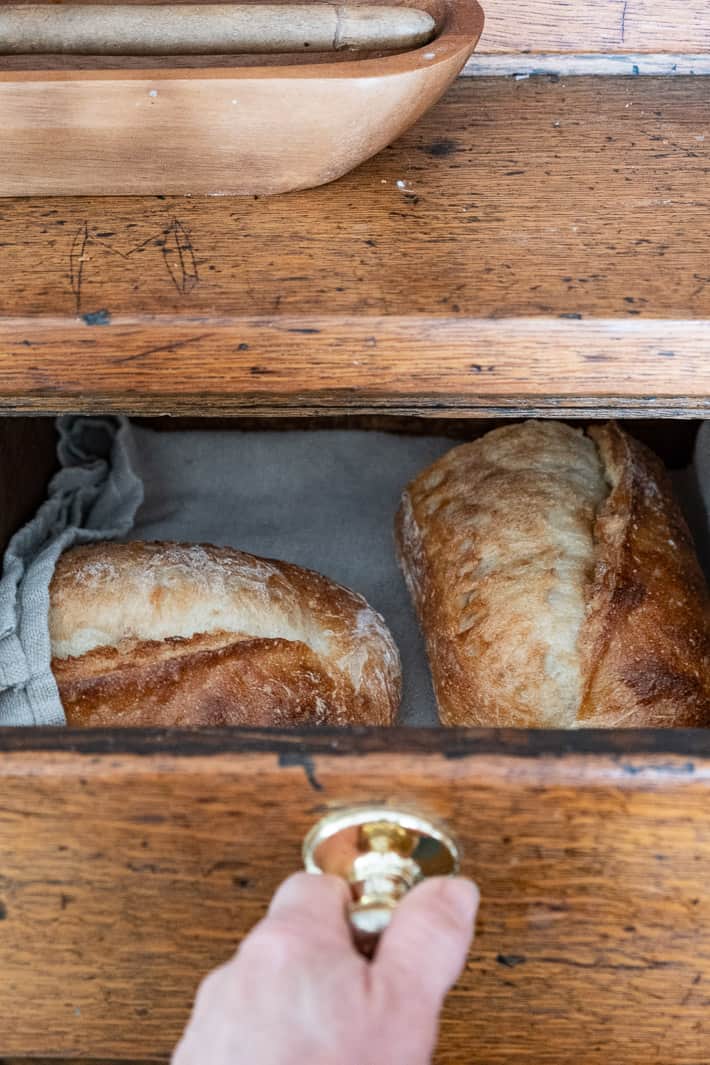 3. Unwrapped in a drawer

This was my attempt to replicate a bread box. I lined the drawer with a linen towel just in case there was any ick in the drawer. One loaf was placed with the cut end open to air, the other loaf had the cut end pushed against the side of the drawer.

This method worked surprisingly well, with the loaf that had the cut end pushed against the side of the drawer staying quite close to its original texture. Soft on the inside and crusty (not soft) crust.

Results - PRETTY DARN GOOD. But the drawer swelled up and the bread that didn't have the cut end covered up dried out. 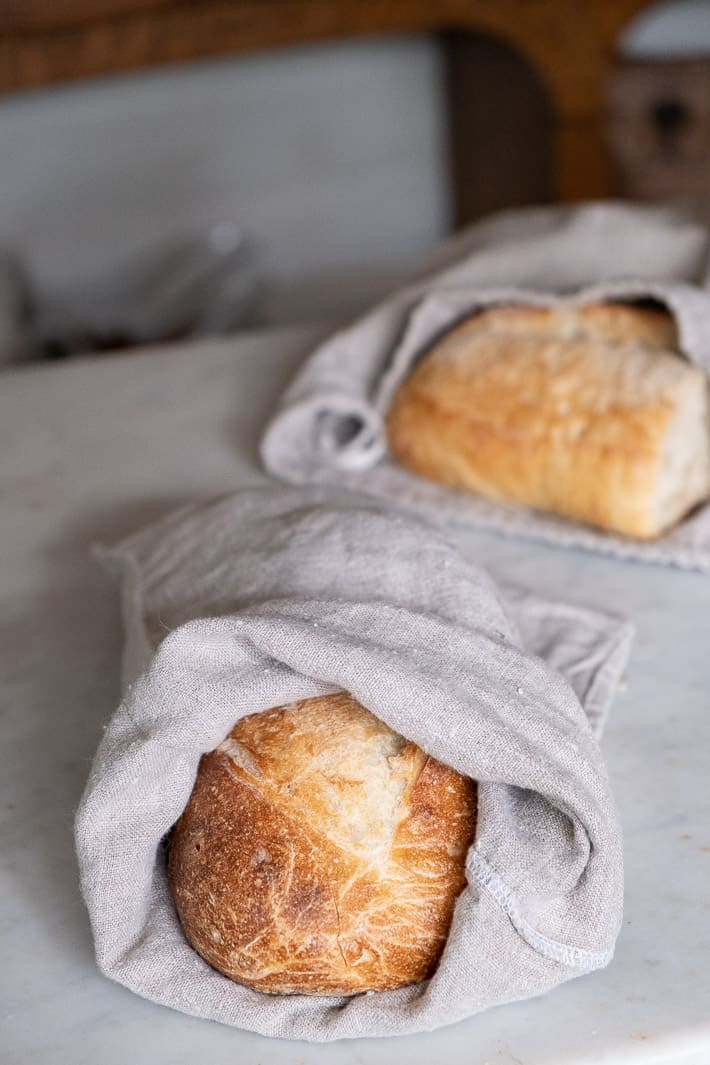 This method was the best for keeping a crusty loaf and preventing mould but only for a couple of days. Within one day the bread started to harden just beneath the crust and the hardness just got deeper and deeper into the loaf with each day it was stored until by day 4 the bread was hard enough to break if you dropped it. 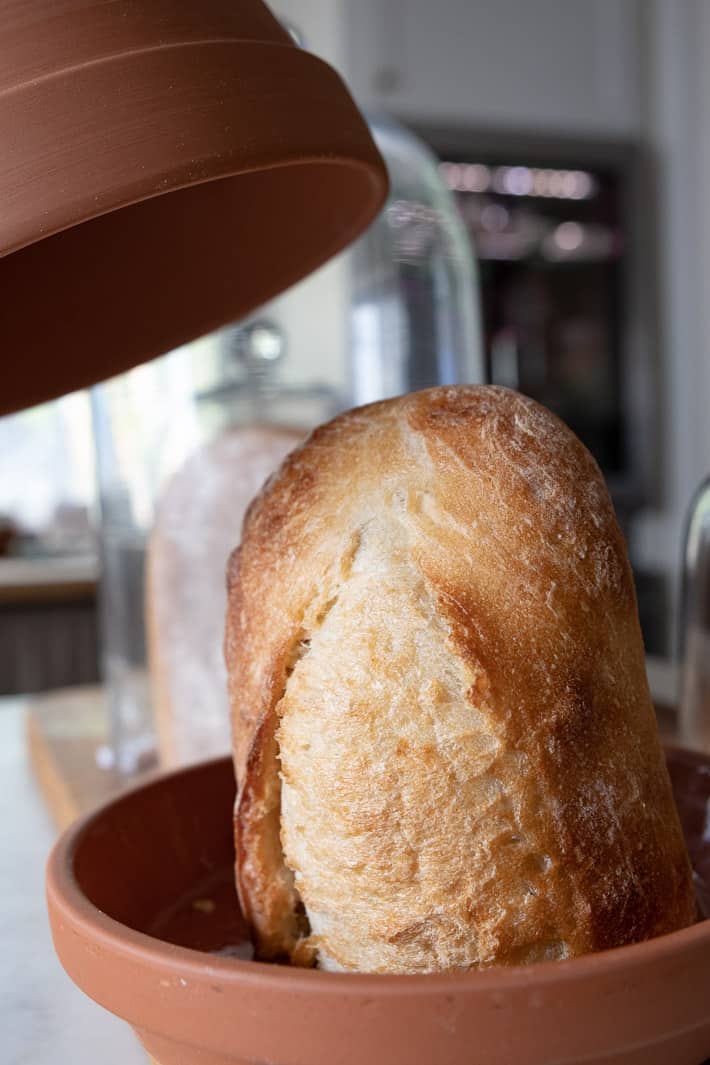 I decided to try storing bread in a clay pot since seeing this clay bread box a few years ago. It made sense.  The clay would absorb extra moisture and help prevent the bread from going hard and stale.  The hole in the top of the pot I figured would act as ventilation and allow moisture to escape.

It didn't work. The bread got mould on its cut end within a few days.

Results - FAIL.  My DIY clay bread holder didn't allow enough moisture to escape. The one for sale on Amazon might work better. I'm not sure. 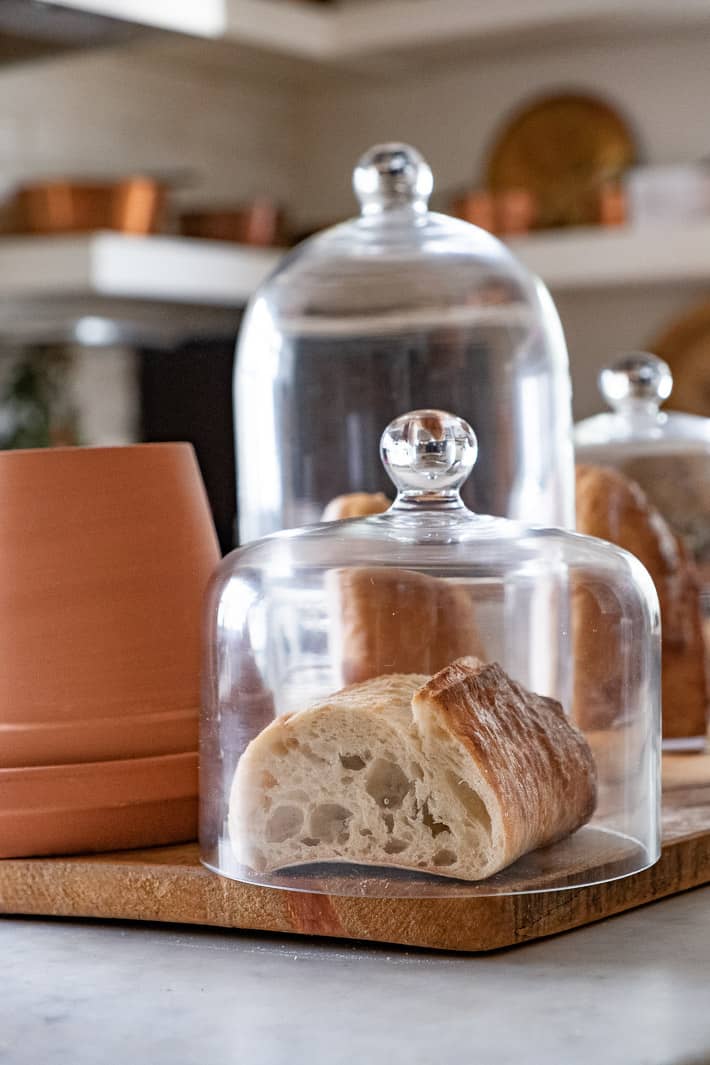 6. Under medium sized glass dome with ventilation - bread on its size. After seeing how quickly the bread went mouldy under glass domes with no ventilation I did two things. I added ventilation by just offsetting the glass dome so air could get underneath and storing the bread on its side so it could breath. I was worried it would dry out if I did this and it did dry out a little bit, but it not so much that that portion of bread wasn't edible. It just wasn't quite as soft as a fresh cut.

Results - Not bad, but not the winning combination either.

7. & 8. - Under glass domes (one large one smaller) with ventilation with the bread sitting on its cut edge.

Mould.  Mould, mould, mould.  I thought using a larger glass dome would maybe prevent the mould from forming so quickly but it didn't.

Keep in mind with all of these methods, I wasn't cutting the bread daily exposing a new fresh end. This would help the bread stay fresher longer because you'd have a new cut end all the time which would prevent mould.  If you were to use any of these methods while constantly cutting from the bread, they would stay fresh longer.

There was ONE method of storing the bread that worked much better than everything I tried.  And here it is. 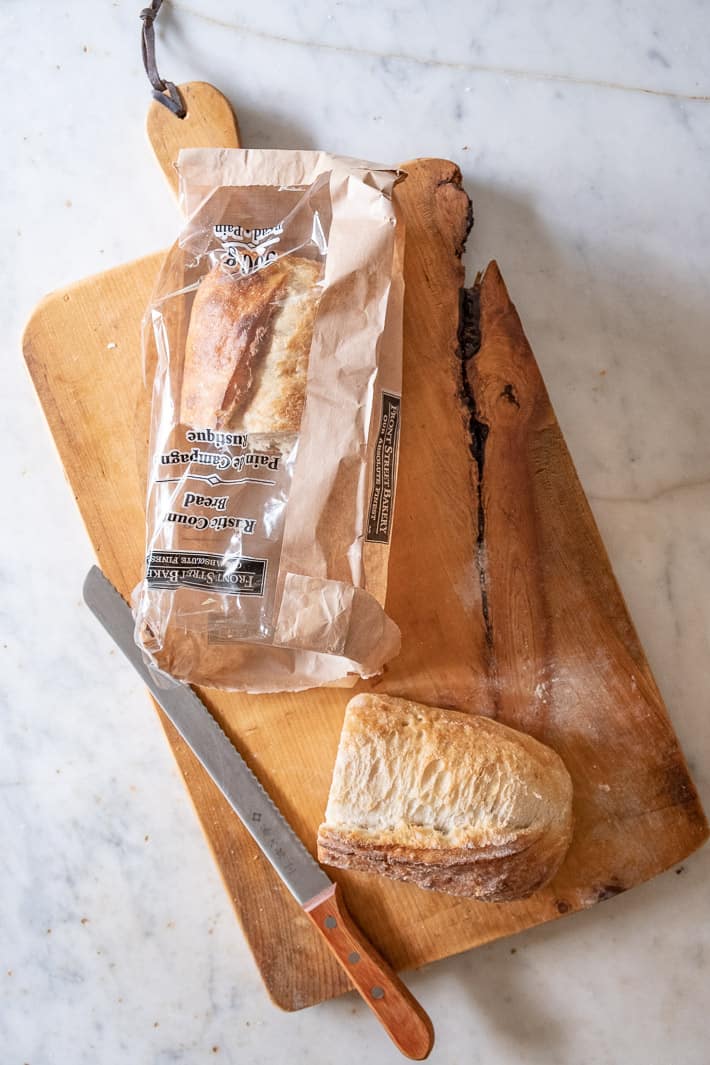 Yeah. Storing the bread in the bag it came from the bakery in. It was far and away the best method for storing the bread, lol. Another option along these lines is to store it in a paper bag at room temperature.

All of these methods are done using store bought bread but they apply to home baked bread as well.

Can you leave freshly baked bread out overnight?

When I bake bread I always leave it on the counter overnight. You definitely don't want to wrap it in something that it can't breath in (like a plastic bag) until it has completely cooled.

If you've already cut your bread make sure you store it with the cut side down on the counter to help stop the end from getting dry.

If you LIKE a soft crust then wrap the freshly baked bread in a tea towel.

If you LIKE a crispy crust just put it on the counter or on a cooling rack so the bottom has air circulating under it.

The other way to go is storing your bread in a little antique contraption called a bread box. They have proper ventilation and are literally made for storing bread.  They used to be popular back in the olden days but they're making a comeback. Why is this relic making its way back into kitchens?

You might say that bread boxes are the greatest thing since before sliced bread.

I've already been browsing and I really like this sleek white metal one but of course I'll have to do some research and testing before I commit $29.99 and more importantly counter space to one.

What is the best way to keep bread fresh longer?

Storing bread in the freezer is the best way to keep it fresh long term. Avoid putting bread in the fridge though because the slow cooling does something to the starches which makes it stale quickly. If you plan on toasting it, that doesn't matter though.

There are two major things that happen when you store bread. It either dries out, or it gets mouldy.

The best way to store it is in a paper bag or the bag your fresh bread came in (as long as it's a bakery bag and not a plastic bag). But even then don't expect to get any more than 3 days of freshness out of it.

For the longest shelf life and best quality, wrap your bread in plastic wrap or a plastic bag and store your fresh bread in the freezer. Slice it first then freeze. It'll be ready to grab a couple of pieces for a sandwich or thick piece of french toast drizzled with obscene amounts of maple syrup. And butter. don't forget the butter.

Now if you'll excuse me I have some butter to make.