This is a bit of a misleading title, I'll admit. You'll probably need to peel a potato again at some point in your life. I'm not sure where or when but it'll happen. You WON'T need to do it for a pot of mashed potatoes though. 'Cause I'm going to show you how to use a potato ricer.

So stop doing it.

I've mentioned the potato ricer before and how it's one of the kitchen tools you should have, but I didn't really explain why.

For smooth mashed potatoes a potato ricer is the only way to go.

At this point you may have noticed there's not a lot of funny in this potato post.

That is because I'm very serious about my potatoes. Deadly serious. They're no joking matter and I intend to use this post to treat them with the reverence they deserve.

But first a potato joke.

Q: Why shouldn't you give a zombie mashed potatoes.

A: Because they're already a little grave-y

My mother used a potato ricer when I was growing up and I thought it made the worst potatoes in the world. Like, they were awful.

Turns out, she wasn't using it properly. This was before you could use the Internet to look up everything from how to rice a potato to how to perform brain surgery on your lunch hour with a stapler.

So she just took the ricer, held it over our plates and squished out some potatoes onto it.

That part she got right. What she got wrong was you're supposed to rice the potatoes back into the pot, add your milk and butter and give 'em a stir.

How does it work?

Wanna see the magic of a potato ricer? Here we go ...

Let's all just pretend these photos are a lot nicer than they are.

You need a pot with water for boiling the potatoes, a few potatoes and your potato ricer. It's the star of the show.

I realize it's a disaster and I've since replaced this junkyard dog of a peeler, but I replaced it with the exact same one. I've gone through a lot of different ones and for me it's the best potato peeler.

Cut your potatoes into equal sized chunks and drop them in cold, salted water. Started them in cold water will make sure they cook more evenly. Equal sized chunks ensures all the pieces cook in the same amount of time. Generally I use baking potatoes for mashed potatoes. Sometimes known as Idaho potatoes. They're not too starchy, not too dry ... they're potato perfect.

Once your potatoes are cooked drain them over the sink. Don't be bothered to dirty a strainer or pot lid, just pour out the majority of the water while holding the potatoes in with a spoon.

Once drained, using a spoon, drop the potato chunks into your potato ricer.

Pull the handle of the potato ricer down and squeeze those babies out.

The ricer I'm using here is plastic with a flat bottom, which I was a bit nervous about but this ricer lasted me years and years before it finally broke in half during a particularly exhaustive Thanksgiving dinner workout.

I replaced it with a more expensive stainless steel version with a different shape. Which I hated. It doesn't squish out enough of the potatoes leaving some of them inside the ricer. Because the metal ricer was bigger it was also harder for me to wrap my short fingered, square hands around the handles to get enough leverage to squeeze it properly..

The metal one got gifted to someone else and I bought another inexpensive plastic Fox Run potato ricer ended up back in my kitchen.

After you've squeezed the potatoes take a look inside the ricer. There they are. The peels. It's a potato miracle.

Add a whack of butter and some milk or cream and stir with a wooden spoon or a whisk. Enjoy.

My next ricer will be the same style as this one but in metal.

That's it. Easy, no peel mashed potatoes that are smooth and delicious. JUST in time for potato pancake season.

Every season is potato pancake season. 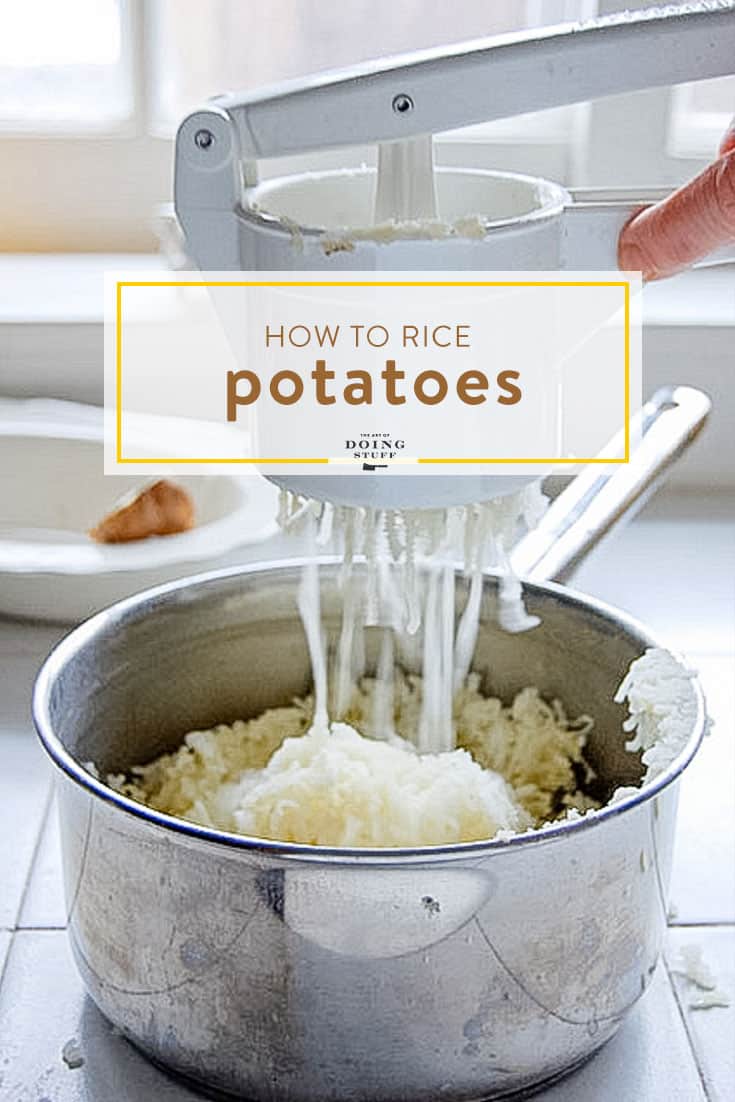