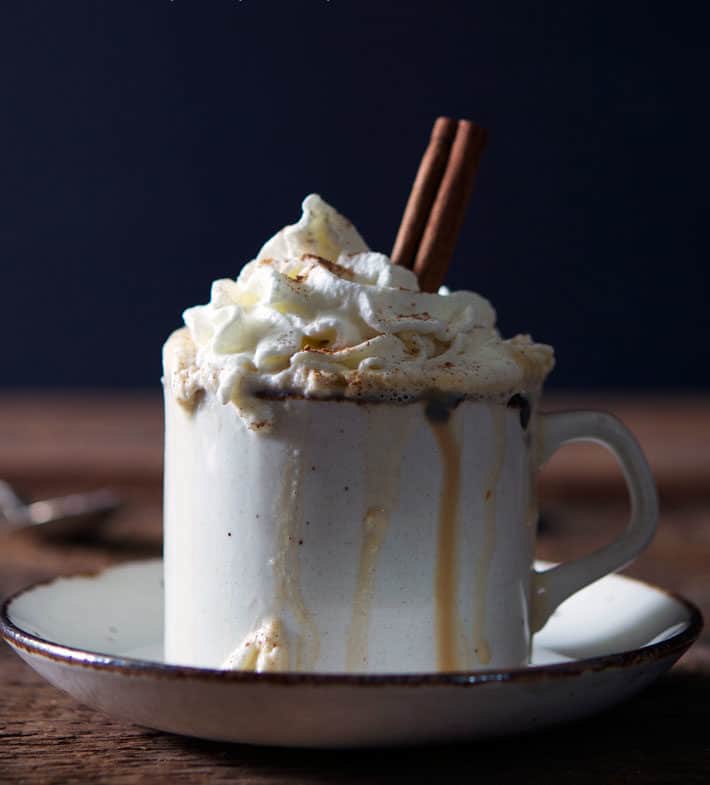 Where do I start? The hours spent skulking around that famous coffee shop? The days and nights spent hunched over my kitchen counter suppressing a constantly threatening feeling of throw uppiness?  The morning I woke up to find a centipede dead in the middle of my kitchen floor, his legs tangled up in the sticky, pumpkin spice residue on my floor, a tiny smile on his face, drunk with spicy goodness?

Those are all good places to start, but I think I'll begin with Vancouver.  This fall I took a trip to Vancouver to visit my nephew.  He had us doing all manner of questionable things including surfing, climbing mountains and using port-a-potties on the side of the road.  I really broadened my horizons.

But the biggest eye opener I had on the entire trip wasn't hiking 7 km straight up the side of some stupid mountain, it was drinking my very first Pumpkin Spice Latte.  I don't drink specialty drinks.  I drink coffee.  Plain, strong coffee.  With lots of cream and sugar so it's barely recognizable as coffee. Which could explain why I nearly passed out like a claustrophobic in a clown car when I tasted a Pumpkin Spice Latte.

Let me try to describe the taste to you in case you've never had one.  It tastes delicious.

It's like liquid pumpkin pie with nutmeg and whipped cream on top.

As soon as I had one I knew I was going to spend a lot of time at home trying to copy the recipe.  I just didn't know how much time.  I figured the best place to start was the Internet to see if someone else had already come up with a copy.  As it turns out, there are 720,000 Google results for "Copy of Pumpkin Spice Latte Recipe", which makes me the 720,001st person to try to replicate it.

If there are hundreds of thousands of recipes for this online already, why come up with another one?  I'll tell you why.

I tried a few of those online recipes and they didn't do it for me.  The majority of them call for making a simple syrup (water & sugar boiled to liquid), adding pumpkin pie spices, simmering it and calling it a day.  It isn't enough.

I sleuthed.  I hunted and searched and mixed and spied and tested until I was sure I had come up with something that really could be confused with an actual store bought Pumpkin Spice Latte.  If  you were in famous coffee shop in Southern Ontario on October 20th of 2016 and spied a small girl, dressed in black, hanging by suction cups from the ceiling, that was me.

From those visits I ascertained that the coffee place uses 4 shots of pumpkin spice syrup in a 16 ounce Grande cup, on top of 2 shots of espresso, topped with 12 ounces of steamed 2% milk and then whipped cream.  I think.  I was hanging from a ceiling so my perception may have been a bit skewed due to lack of blood flow to my brain. Luckily, I procured a small sample of the actual pumpkin pie syrup on one of those visits when I dropped off of the ceiling and directly onto the pumpkin pie syrup dispenser.  I carried it home in my suction cup.

Now that I had a sample of the actual syrup I could test it.  First I tested it just by taste. It was very pumpkin-pie like and very strong.  It was incredibly sweet had a bit of bite to it which I figured was ginger.  Testing it with my Brix Refractometer I discovered it had a sweetness level of 69.  Brix refractometers test how sweet a liquid is.  People use them for testing maple syrup or honey or ... $6 specialty drinks. 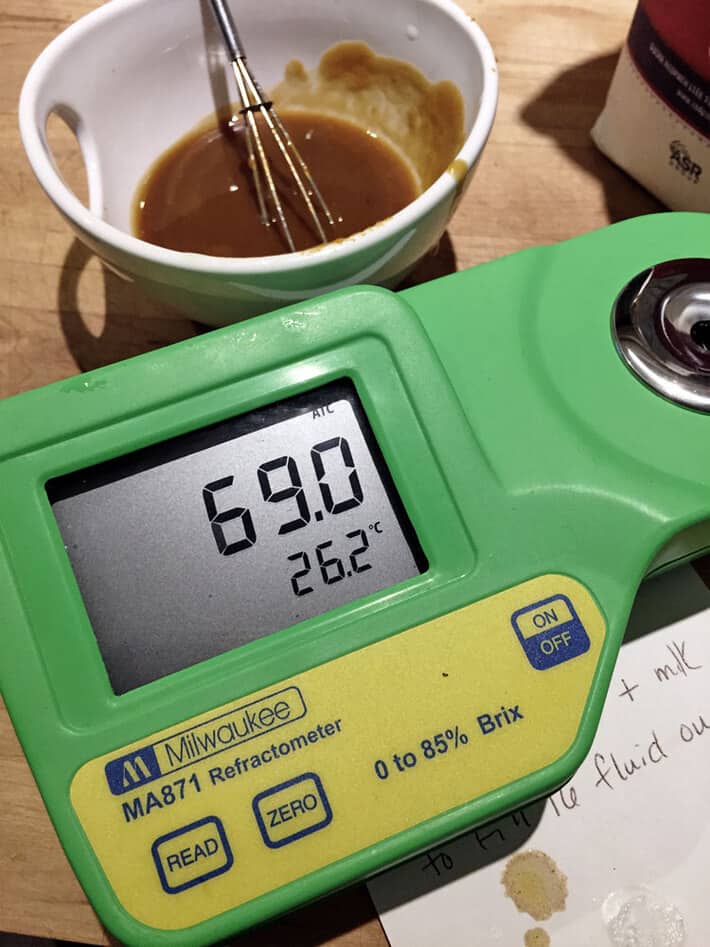 In layman's terms a Brix level of 69 is sweeter than Maple Syrup.  It basically equates to as sickly sweet as a big caramel covered bowl of sweetened condensed milk.

In fact, it's the second highest volume used ingredient, only behind sugar, in the sauce.  So yeah, it's a sweet sauce.  But it has to be sickly sweet because you only use a bit of it in a huge cup.  It needs to be strong.  Punchy. That's why the ginger and cinnamon and other pie flavours are so strong in it too. It's a super-concentrated syrup. 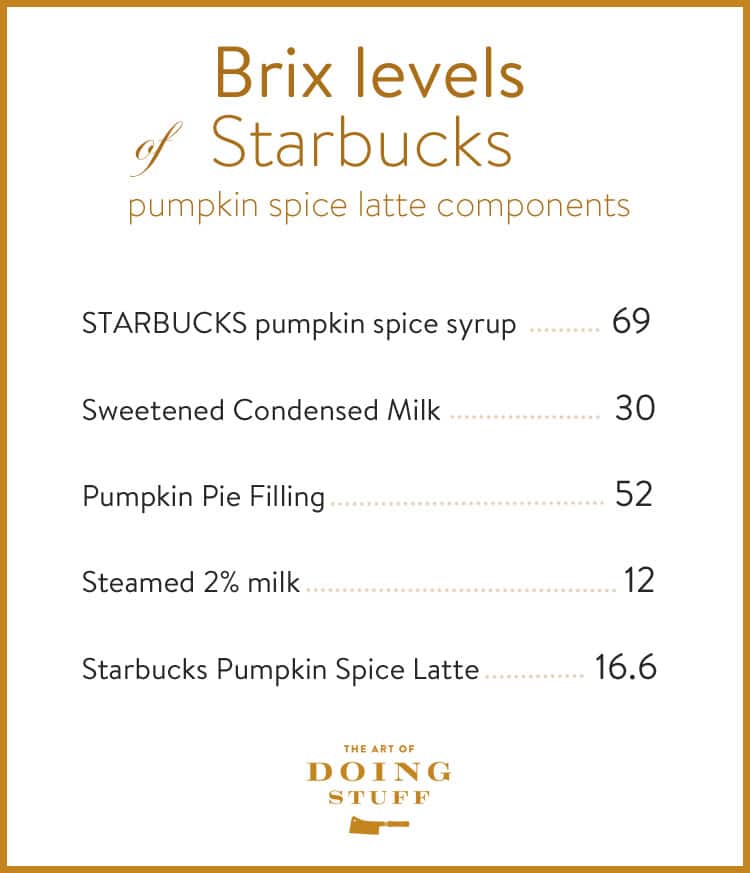 I won't bore you with every single variation and combination of ingredients I experimented with over a 24 hour period, but I can tell you that you can get a reasonable effect either with the easy way or get the full-on GUARANTEED tastes like that world famous Pumpkin Spice Latte by putting in a little extra effort.

The simple version is simple.  I don't even need to write up a recipe for you.  It's easier than the other online versions and tastes way more like an actual Pumpkin Spice Latte.

Add 3 Tablespoons of this mixture per 1 ounce of espresso and fill with 6 ounces of steamed 2% milk.  Top with whipped cream, sprinkle with either Pumpkin Pie spice or cinnamon.  Done.

Or you can make a **real** Pumpkin Spice Latte, call yourself a winner and walk (speed walk probably if you've had enough of them) into the specialty coffee hall of fame. 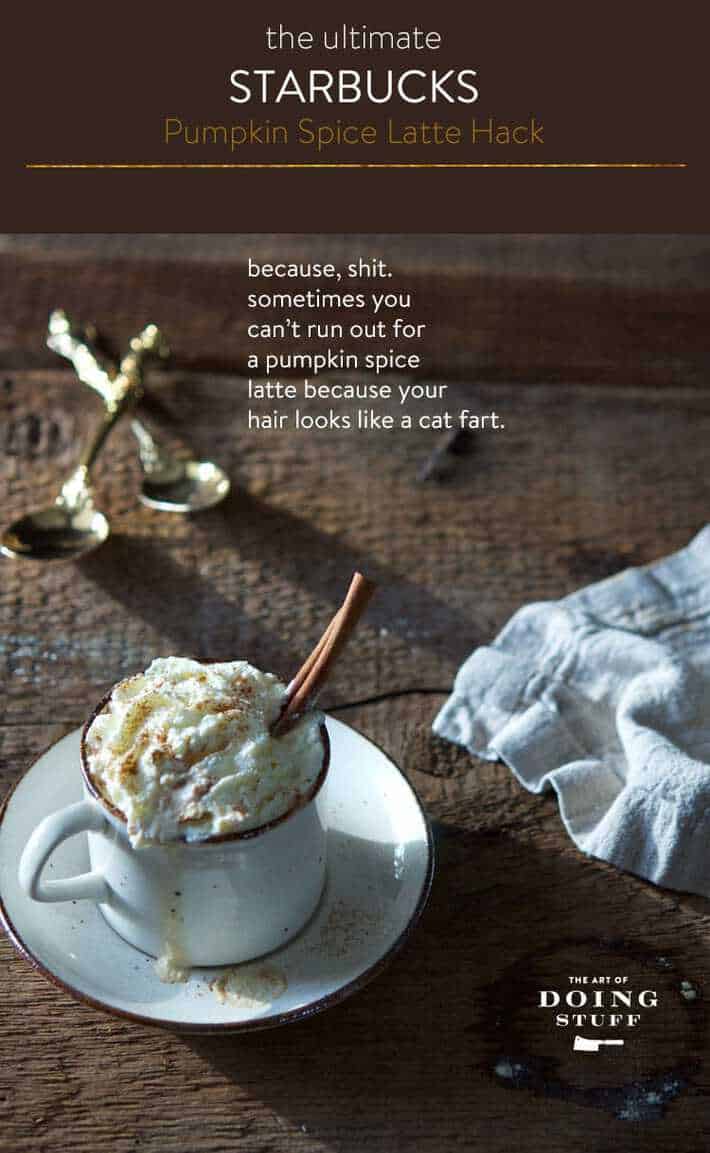 To make the genuine Pumpkin Spice Latte you're going to be using those same two ingredients, Pumpkin Pie Filling and Sweetened Condensed Partly Skim Milk and adding a simple syrup that you've made.  The simple syrup is a mixture of brown sugar (because the caramel tones more closely replicate the original Pumpkin Syrup), fresh ginger, cinnamon sticks, whole cloves and ground nutmeg. 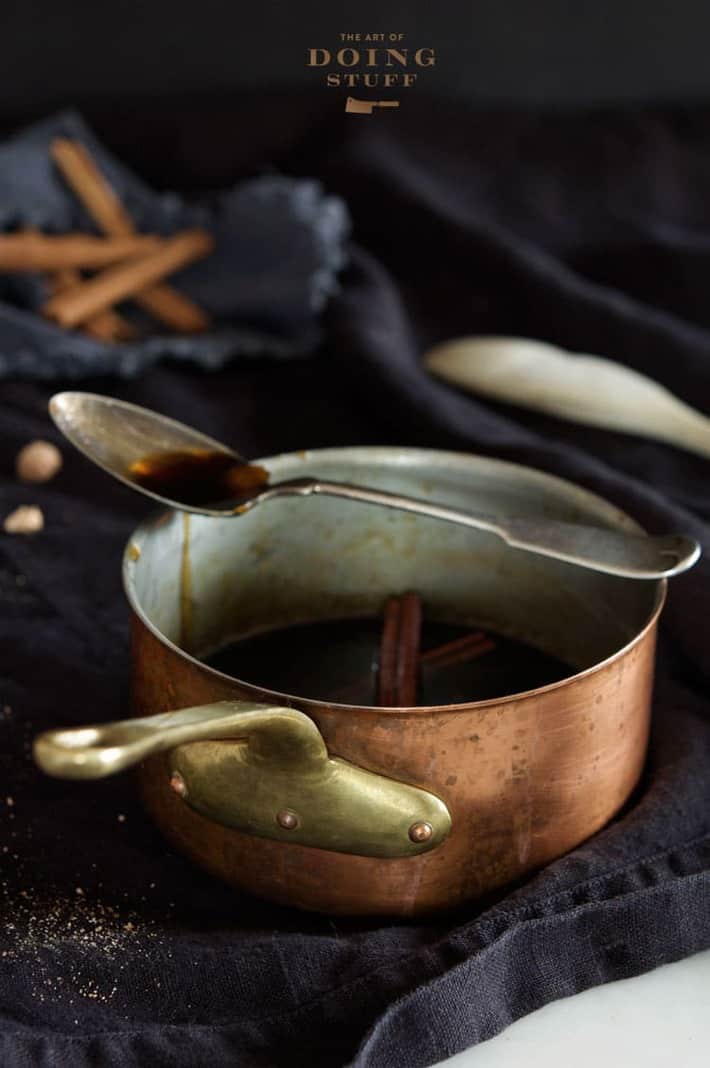 By taking the time to do this extra step your creation goes from "Yeah, that's a pretty good copy" to, "Hey, You there!  You with the Brix refractometer ... there isn't a famous coffee shop within 100 miles of here, so where'd you get that one??!" 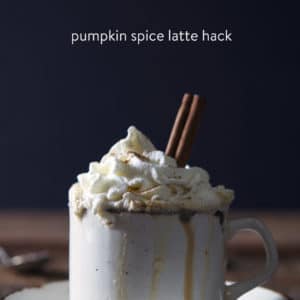 The best Pumpkin Spice Latte copycat recipe on the 'net. Plus you can store it in your fridge for 2 weeks.
5 from 1 vote
Print Pin Rate
Course: Beverage
Servings: 24 servings
Calories: 68kcal
Author: The Art of Doing Stuff

Stores for up to 2 weeks in the fridge. 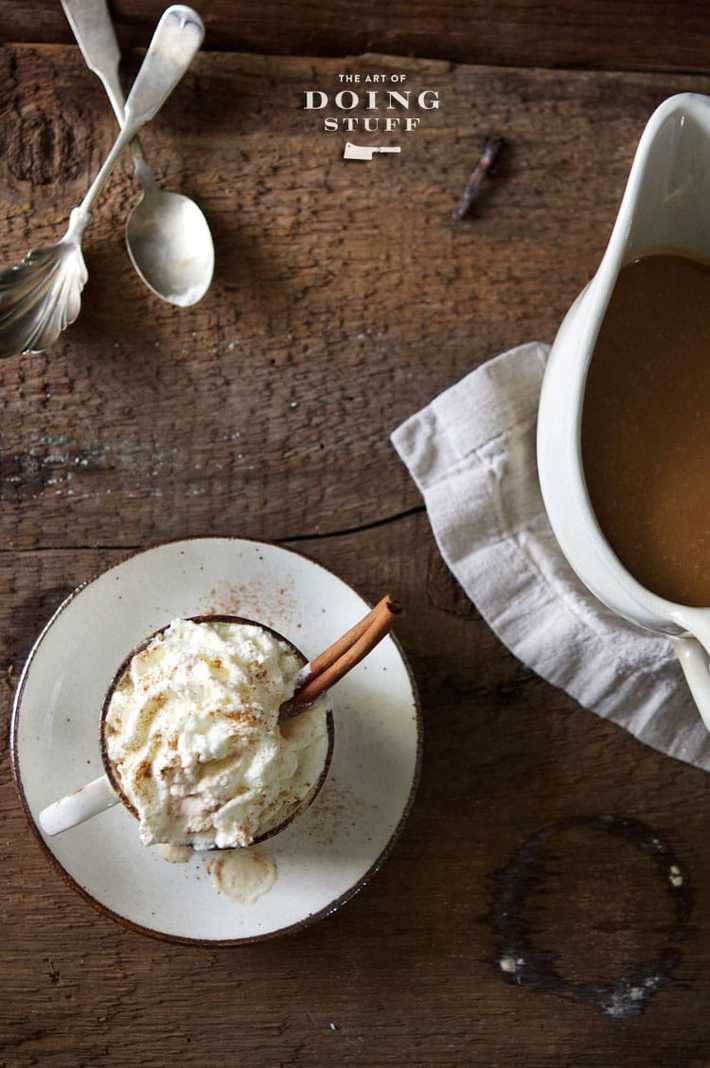 To be perfectly honest with you just typing the words Pumpkin Spice Latte activates my gag reflex.  I'm hoping that goes away.  But I tested and tasted this recipe so many times before I got it right that I probably could have unrolled my tongue into a glass of water and it would have tasted like a Pumpkin Spice Latte.

So forget those other copycat recipes on the Internet.  You have two choices;  the simple recipe or the I'm Proud of You recipe.

Or.  I mean, if you think you can handle it, there's one other option.  It's crazy, so prepare yourself.

You can order a jug of Starbucks' Pumpkin Spice Syrup online.

But where's the fun in that?  Why take a gondola to the top of the mountain, when you can climb it? 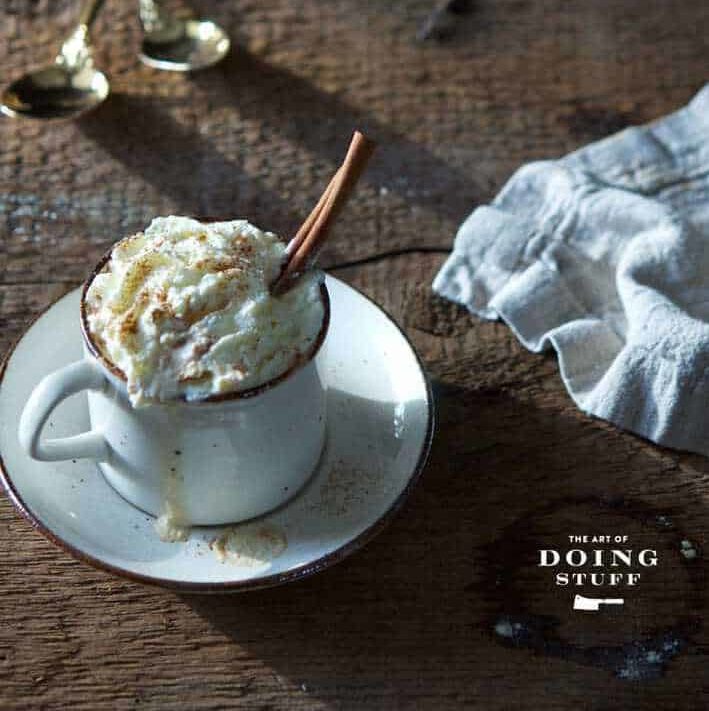