Thinking of giving blood?  Good for you! The following is a true story about how it went for me. 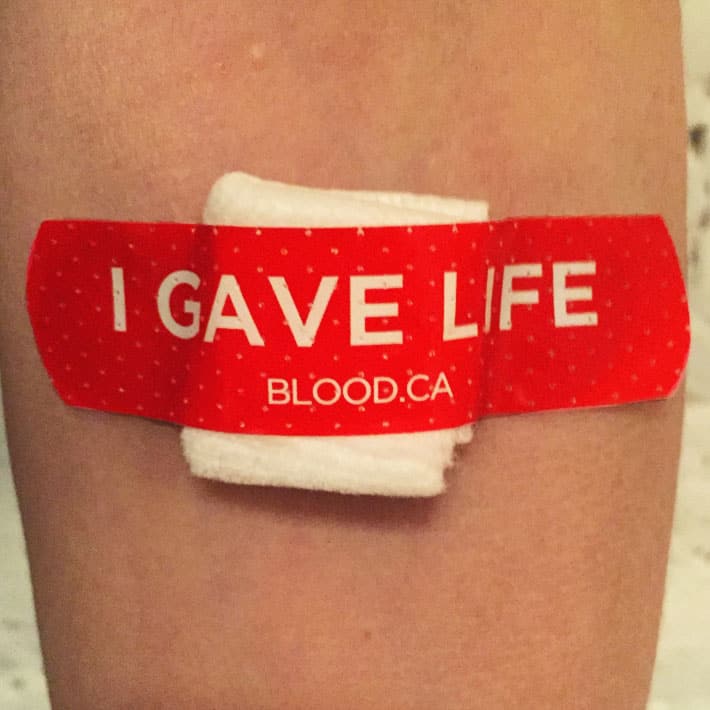 Jessica and Ashley Simpson.  The Olsen Twins.  The Baldwin brothers. Elsa and Anna.  All siblings who not only get along, but get along famously.  They love and support each other and you hardly ever hear about one of them cackling with laughter while plotting the other's death.  Hardly. Ever.

So it was with utter confusion I received the news that one of my sisters had done exactly that.  Plotted my death while cackling with laughter I mean.  You may remember that time I gave blood and nearly died. If you haven't read that story yet I encourage you to do so.  To improve your mental health.

To recap, I had gone to give blood for the very first time with my sister Pink Tool Belt who was also giving blood for the first time.  We, were do-gooders, striding into the church conference room, with the step and swish of live savers.  You might recognize the walk on other life savers like heart surgeons, first responders and the cashier who points out that the bottle of ketchup you have is leaking.

Everything was smooth sailing until I had finished giving blood. The blood sucking woman removed the needle, I said thank yougrhtibmlbleeeeee and then promptly watched the room swirl like soft serve ice cream.  I wanted to call for help, tell the people around me I was going to be sick, thank Bruno Mars for some really great music, but I couldn't because I had to use every last resource of energy I had, to not shit my pants. 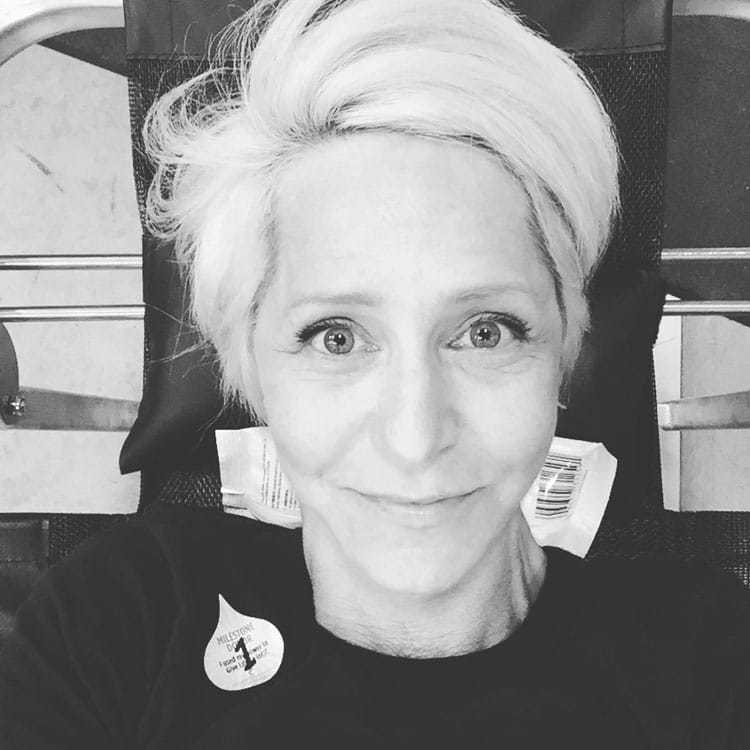 For my sister it went perfectly well. Noooo problems other than a possible broken nail from desperately texting everyone she knew to let them know I was currently passing out while giving blood.  She was fine, waving and smiling like a lunatic at me from the donation bed across from me.

I, on the other hand, knew for a fact I had been possessed by a Poltergeist. One of the mean ones. Not only did I nearly throw up and become sick to my pants in public, I felt ill and tired for days afterwards. My sister?  She gave her blood, ate some cookies and rolled her eyes whenever I said how awful I felt.

So when a couple of weeks ago she told me she had booked us both in to give blood again, I knew this could only mean one thing.  She wanted me dead.

Sister - "Oh, by the way, I signed us up to donate blood again."

Sister - "Well, you said you were going to try it again."

Me - "Yeah. On my terms. When I wanted to. Some time after I died or something. Not NOW. Not YET."

I could have cancelled but she was right. I did say I would give it one more shot and it was probably better to get it over with.  Then at least I could spend the rest of my life happily not giving blood but safe in the knowledge that I'd given it not one but TWO shots.  Basically it meant I was kind of a Saint.  A Saint who was planning to wear multiple pairs of full coverage underwear this time around.  Just in case.

The two days leading up to my blood donation day I did everything possible to prepare myself.  I ate iron filled steak for dinner, dark greens and drank about 6 litres of water each day.  I got a full 8 hours sleep the night before my donation and ate some more steak a couple of hours before my appointment.  Before heading to the clinic/church meeting room I ate some salty crackers and drank yet another litre of water.

I did not swish and swagger into the church this time so much as slosh.

We arrived at the church and showed our donor cards at the reception area. They asked if we'd like to take a moment to book our NEXT appointment.  Um.  We looked at each other and then I looked at my feet. My sister kindly said, "It didn't go very well for her last time ... HAHAHAHAHAHAHAHAAH".  Ahem.  Yup.  That's true. I'm going to hold off on booking my next appointment on account of I'm not sure I'm going to live through this one.

My sister and I got our cards stamped and went through the process of showing our arms to prove we weren't IV drug users, answering the questionnaire and having our blood tested to make sure we had enough iron in our blood.

I was ushered to a chair where a very nice phlebotomist asked how I was.  "I'm good. I'm O.K. I kind of have to pee.  Hey, maybe I should let you know I think I almost died last time.  Well not died, but I went into shock.  Just you know, a little bit. I mean they covered me in ice and I ended up, heh, heh ... well I ended up on a stretcher."

She had more of a shocked look on her face than I was hoping for and said maybe she'd tip me back for my donation just in case. That would make things go a little easier. My immediate thought was ... why not do this every time someone donates then?

I tried to stay calm even though I was terrified about passing out and barfing everywhere.  The multiple underwear under my jeans eased a bit of the nervousness from that end.

In no time the needle was in and my rare B- blood was pumping out.  My phlebotomist did not leave my side.  Not for a second.  I'd glance at her and she'd glance at me and I'd say "so far so good" and then we'd  give each other the thumbs up and start the routine again. By now the entire place knew about my previous experience and were coming by to ask how I was doing so they could decide how to place their wagers. 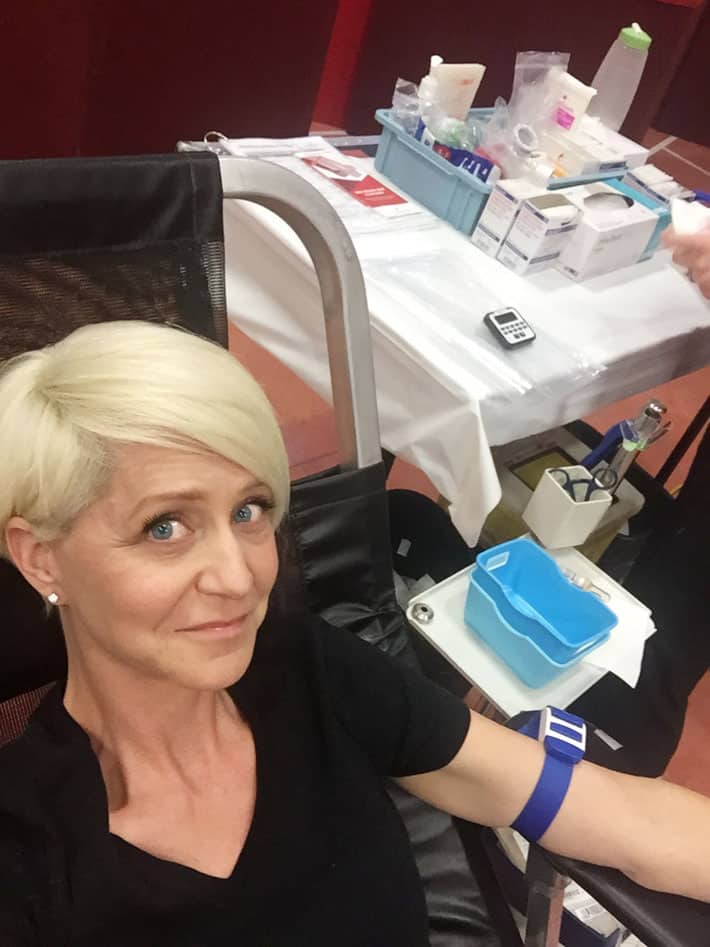 At this point my sister was seated across from me and almost done her donation.  She was merrily telling her phlebotomist about my experience last time.  I think I heard the word wussy but I'm not positive.

When the moment of life or death came (when I was done and the needle was removed) I stayed very still and waited for the room to close in on me and my skin to turn both hot and cold at the very same time.  Nothing.  I waited some more thinking it might take a bit longer since I was in the luxurious laying down position.  Nothing.  The staff was so great, they even brought me over some juice before I tried walking. Everyone stared at me waiting to see if they needed to rush to my side.  Nothing. Money passed hands, high fives were given and I breathed a sign of relief.

I did it.  NO problem.  I thought.  Just as I made it to the free cookies and juice table I glanced over to my sister to give her the thumbs up when it happened.

She was staring over at me with unfocused eyes, white as a sheet and a look of "omgi'mgoingtodie" on her face. Not unlike the face that was staring back at her during our previous appointment.  The one she smiled and waved gleefully at.

Down she went.  I tried to get to her, to give her love and comfort and endlessly sarcastic remarks but by now we were kind of infamous in the blood giving department and no one would let me over there because they were afraid if I saw my fading sister up close that I'd go down myself.

Evidently that would cause all kinds of trouble over the bets that had already been placed and collected on.

I suddenly remembered my sister mentioning she'd only had a couple of coffees that day.  Nothing to drink otherwise. She was dehydrated like I was the day I gave blood and ended up under a blanket of ice and cold towels.  Wow. This drinking water thing before donating seemed to be really important. Poor thing.

So I sat and ate cookies and watched my sister's eyes roll into the back of her head from a distance calling over to her in a reassuring tone ... "Hey! I signed us up to donate blood again!"