Home » Chickens » Keeping Chickens » The Lash Egg.Or, what the hell just came out of my chicken?

The Lash Egg.
Or, what the hell just came out of my chicken?

There is no end to the gross oddities that you’re exposed to when you have chickens. Chicken keeping is not for the faint of heart. Or fainters in general. Partly because of the lash egg. 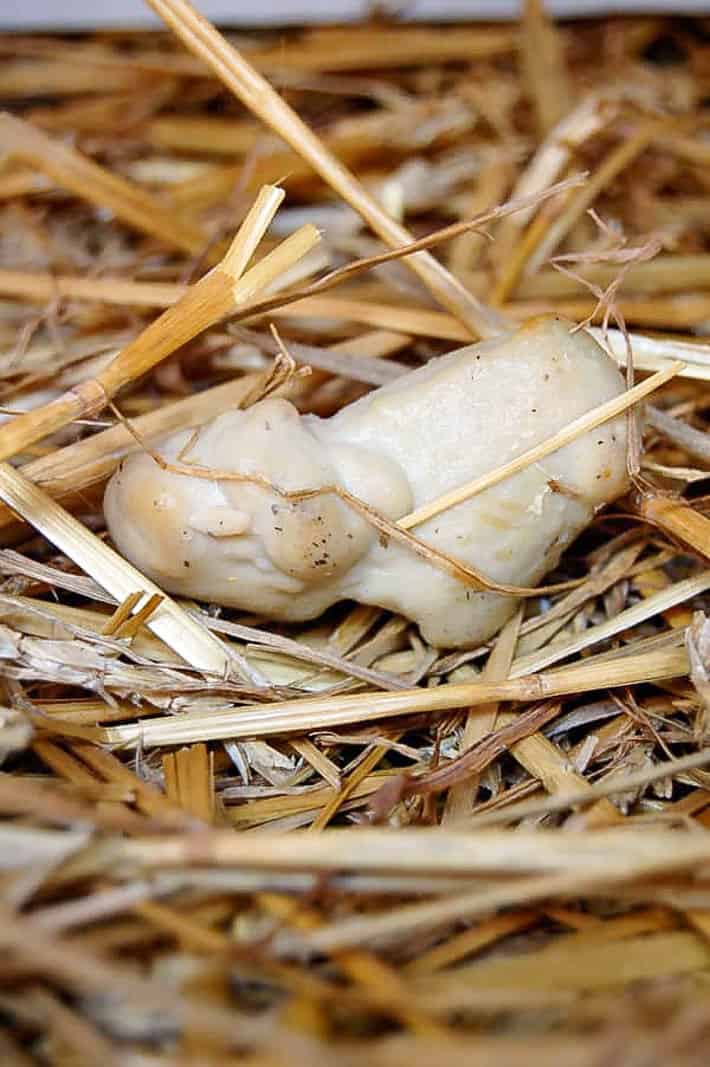 Now I’m not a farmer. I’m a regular gal in a regular house with nice shoes, an affinity for gold plated flatware and expensive haircuts. I also have chickens. So my shoes get chicken crap on them and I once left the grocery store realizing I had a piece of straw sticking out of my expensive haircut. That straw had chicken poop on it.

So even though the chicken poop part of me could handle what I found in the nesting box the other day, the nice shoes part of me was aghast and disgusted.

When you have chickens, most days things go without incident. It’s just you and your gorgeous chickens as they romp in the straw, scratch in the dirt and dance in the sunshine (everything seen through a filtered lens in slow motion). No, seriously, they dance in the sunshine. For real. Then one day you go to the chicken coop and you find something new. Something unusual. Something horrifyingly gross.

Such was the case last Tuesday.

Last Tuesday I went to check the nesting boxes, (where the chickens lay their eggs) like I normally do. 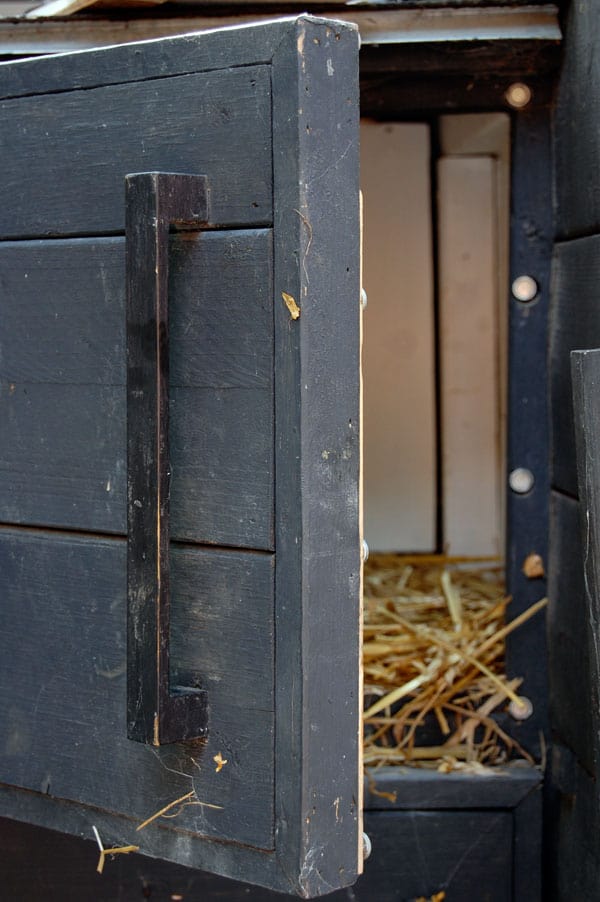 And I found an egg like I normally do. 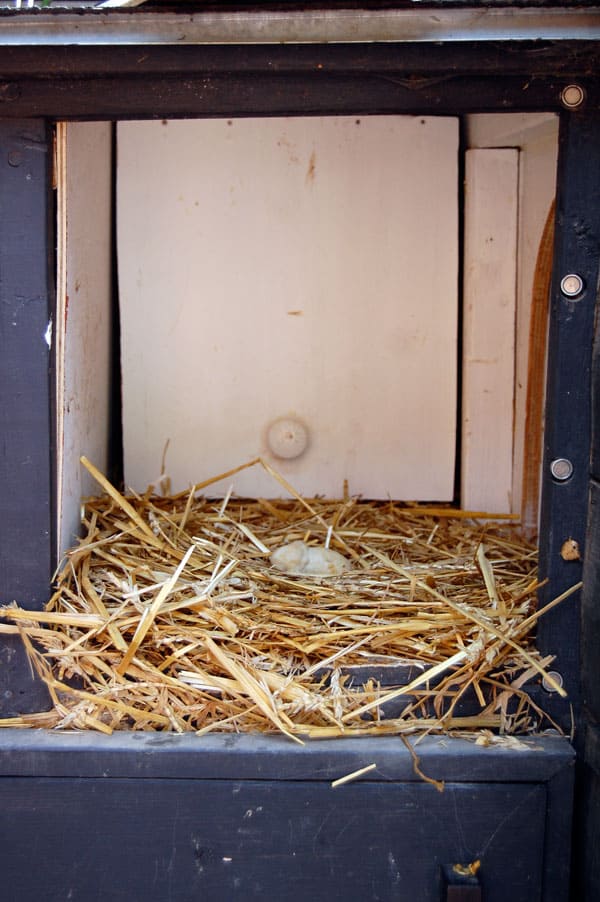 Only it wasn’t an egg, it was a horrifying rubbery blob.

I knew right away I had a problem. One of my chickens clearly needed an exorcism.  Barf. 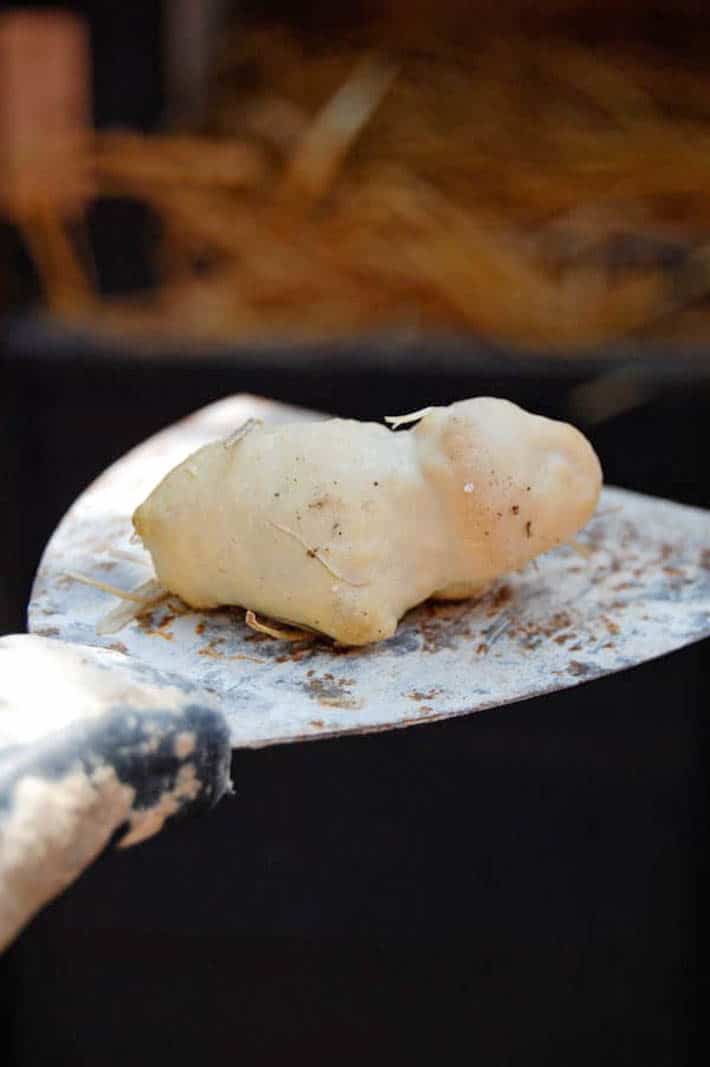 The chicken owner part of me removed the offending rubber blob from the nesting box, but the gold flatware part of me refused to touch it.

This, dear readers, is a regular egg sitting beside a lash egg. 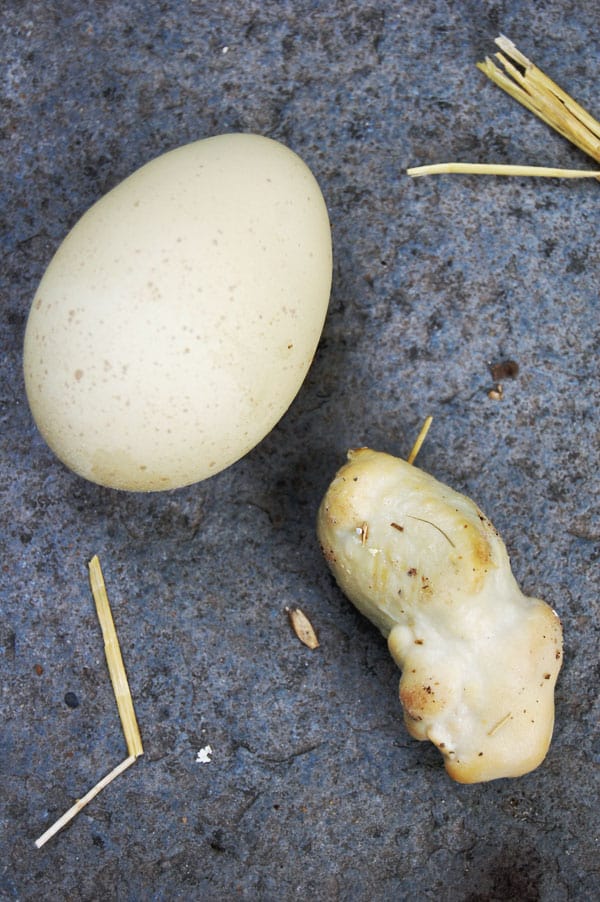 I asked poultry vet Dr. Mike Petrik, The Chicken Vet, what the hell this is and what causes it.

This was our email exchange:

What the hell is this and do my chickens need an exorcism.  I have some sage around here somewhere and I think I can find a priest.

This is the result of an egg partly forming, then getting “hung up” in the oviduct.  If you squint, you can imagine that the bigger piece is the yolk and the funny shaped part is a collapsed membrane that is folded around some amorphous material.  The membrane is the part where the shell would have formed and the amphorous stuff is the protein from the egg white, once the water is removed.

This often happens with sick chickens, since the first response to illness is to conserve resources.  The egg stops whereever it is in the process.  If you cut it open you can see the yolk is cooked.  The result of a fever.

It is quite possible that this is from Cuddles and is a sign that she is fully recovered and ready to come back into production. 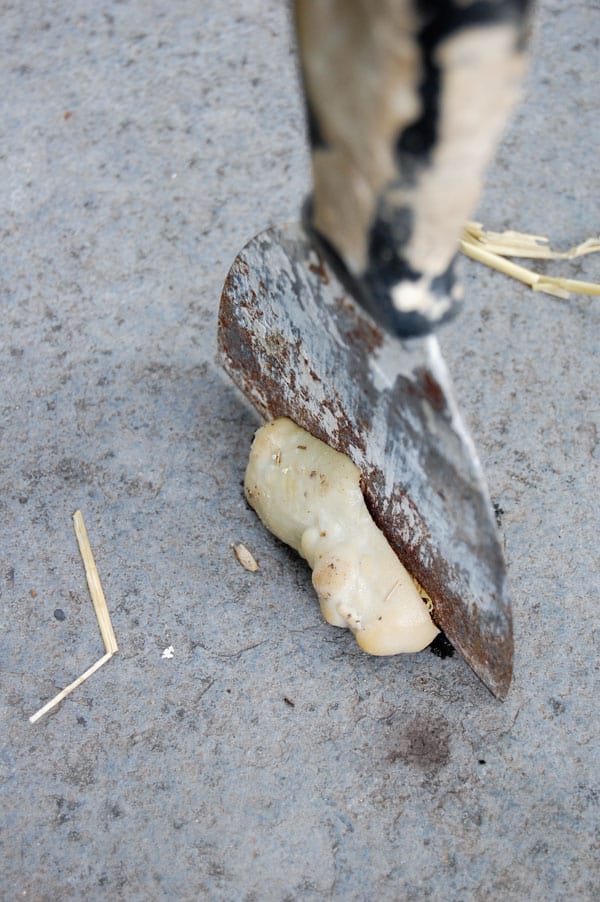 I’m losing count here but I think we’re up to triple barf. 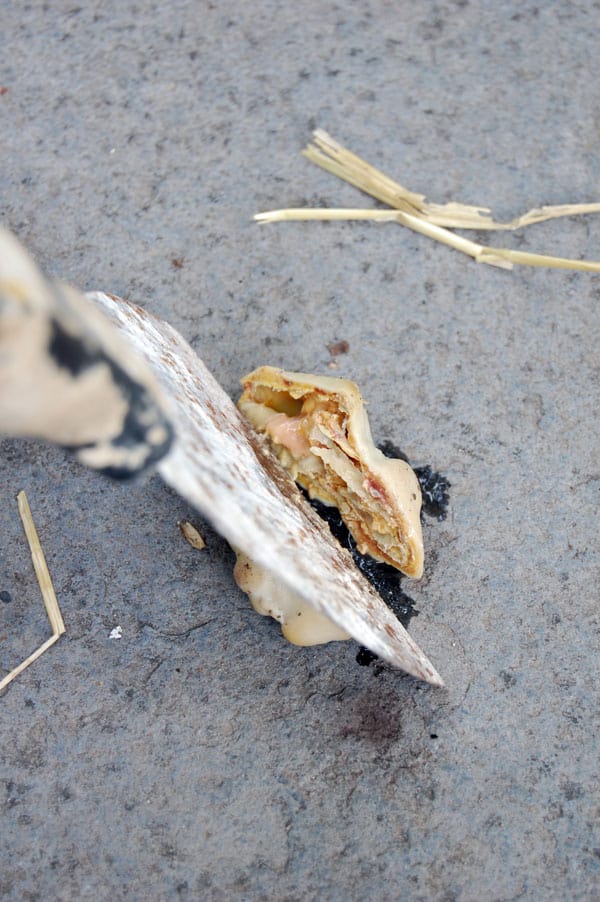 The inside of the disgusting lash egg. 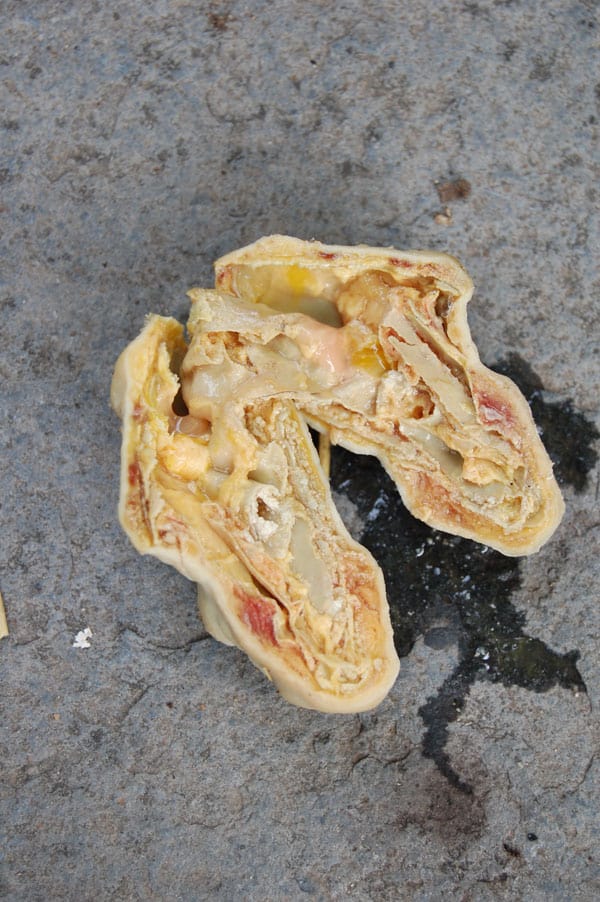 And just as Mike predicted, some of it is cooked on the inside. 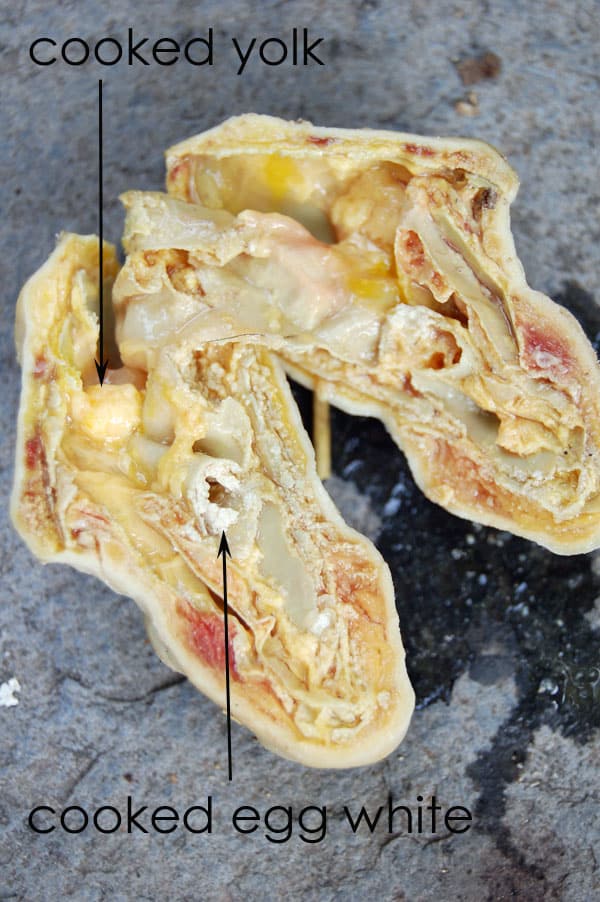 Now let’s cut each half in half again. 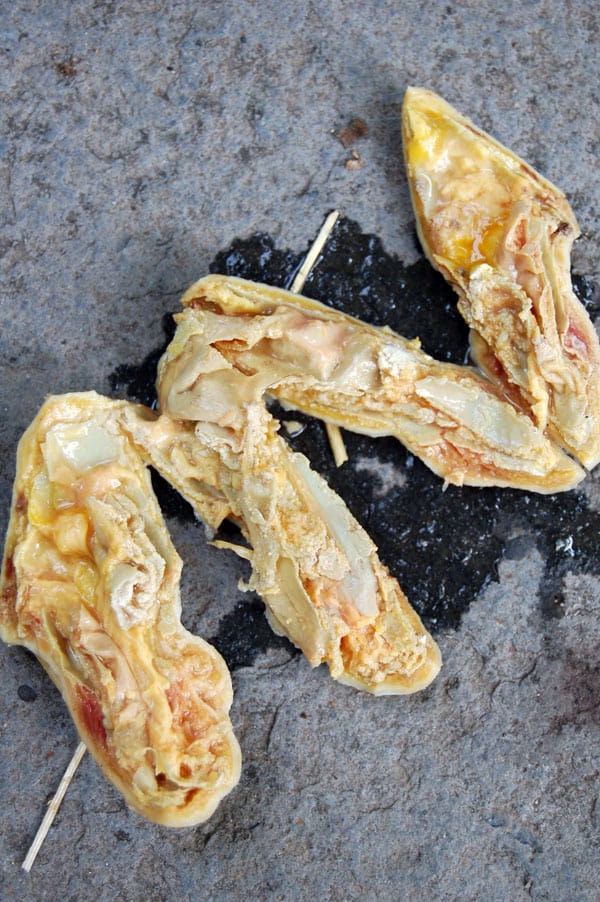 Now you can really see the eggshell membrane in there.

So this was definitely an egg that was just about finished forming when something went awry.

The morning after this happened, Cuddles was back in the nesting box but she didn’t lay anything. In fact she hasn’t laid anything since. But she seems to be happy and healthy.

Other than that whole head spinning around incident yesterday.

Meh.  I’m sure it was nothing.