It's almost Valentine's Day!!  A holiday fraught with two of everyone's most favourite things - waxy chocolates and unfulfilled expectation. 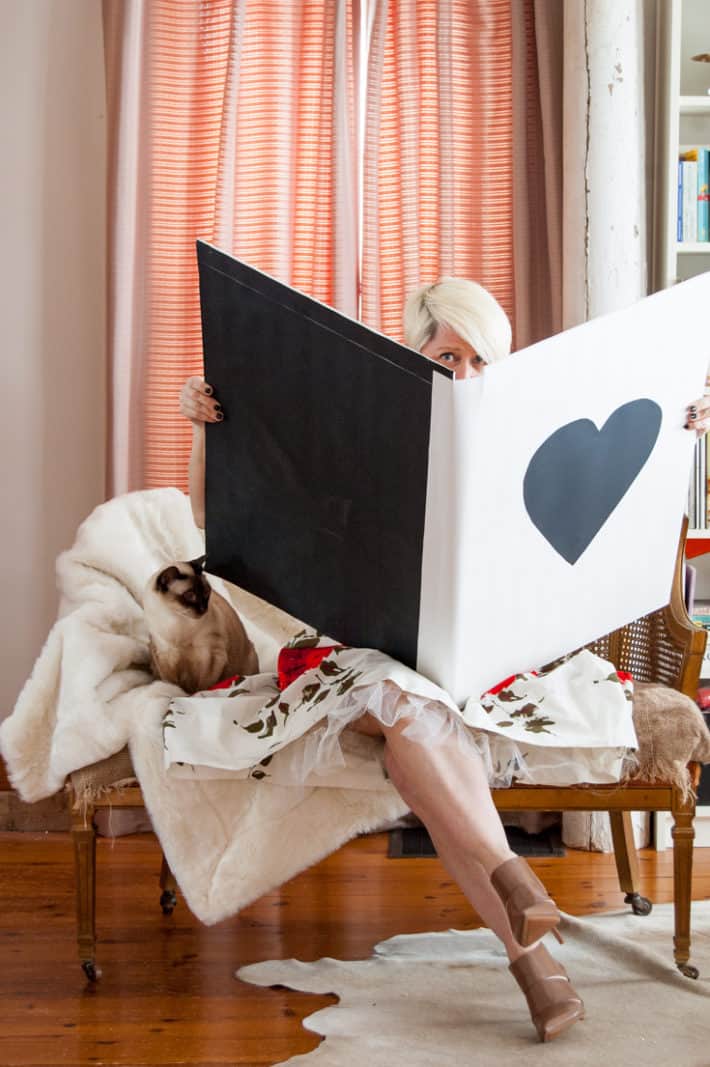 To be a truly successful blogger you must, MUST celebrate each and every holiday with steroidal vigour.  As if failing to create a St. Patrick's Day themed dinner party complete with live leprechauns glued to your wall in the form of a wreath will result in a man named Rocco showing up at your front door with a baseball bat and an unhealthy obsession with your knees.

Actually, scratch the baseball bat thing, if he's a blog enforcer obviously he'll beat you with a piece of a broken down pallet accessorized with some washi tape.

There are two other things crucial to being a successful blogger.  I mean it isn't just about holiday frenzy.

The first being an ability to write.  The second being an ability to photograph, manage, market, promote, beg, schedule, code, cry, recover, create, make, convey, invent and be perfectly content living for days on end without any real human contact beyond talking to your cat who you sometimes dress in pants because then it kind of feels like you have a co-worker, albeit a co-worker who never contributes anything significant to the business.  So very much like upper management.

You get all those skillz down and you, my friend, WILL BE A SUCCESSFUL BLOGGER.

One of my attempts to make it into the world of successful bloggers was coming up with the cherry tarts I featured last week. 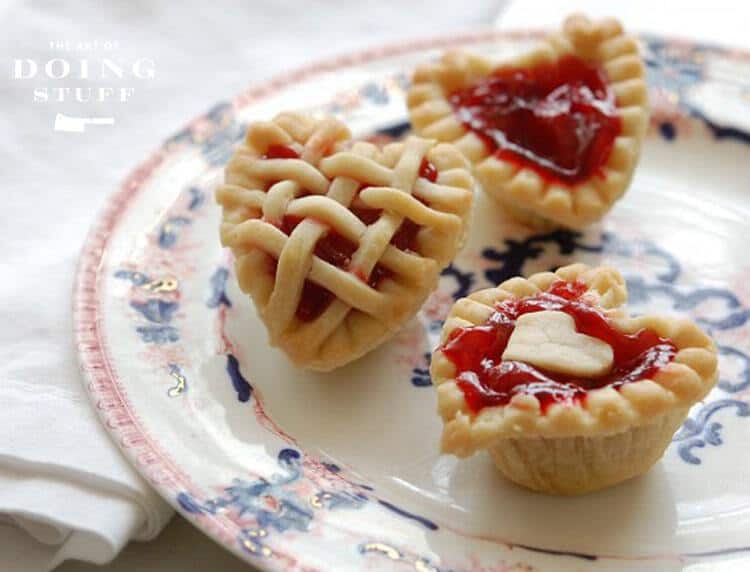 Why do these if I hate Valentine's day? As I do.  Because WOOOOOOOOOOOO  it's a holiday and we must all celebrate the holidays even if we don't like them and think they're stupid and would rather eat a bag of toenails.

The tarts are really good and really easy by the way. Nothing like a bag of toenails.

I do not like Valentine's Day.   I think it's stupid and silly.  And kind of embarrassing really; mostly for men.  It's a holiday that at its heart seeks to point out that men, if unreminded, would go years on end, possibly even an entire LIFETIME without buying their wives cheap, skanky underwear.  That's just dumb.  Any men I've come across have to be reminded to NOT buy their wives cheap, skanky underwear.

Enter Valentine's Day, which conveniently and concisely reminds men throughout the world that nothing better assures a woman that she is loved and cared for, than a man coming home from work, pulling a newly purchased Valentine's Day card out of a plastic bag, signing it in front of her and handing it over with a self assured "I got you covered." smile. Once a year.

If the inventors of Valentine's Day were really serious about their job, the international symbol for it wouldn't be a heart, it would be the silhouette of a man with a drill and a romance novel tucked into his toolbelt while taking out the garbage in front of the whole neighbourhood wearing a thong.  Handy, romantic, well read, funny, confident and helpful.

But because I'm a blogger and wish to maintain my status of successful blogger I spent a lot of time trying to come up with a good Valentine's Day DIY for this year.  Maybe some food or a decoration or perhaps a recipe for how to make your own edible underwear.  You know. Something classy.

I couldn't do it. Really the only Valentine's Day decorations I like are the super cheesy paper cutout hearts that you stick to your windows.  You know, kindergarten type stuff.  Which makes sense since I also like those old fashioned classmate Valentine's Day cards which are just a cutout of a slightly misshapen cartoon puppy holding a heart. 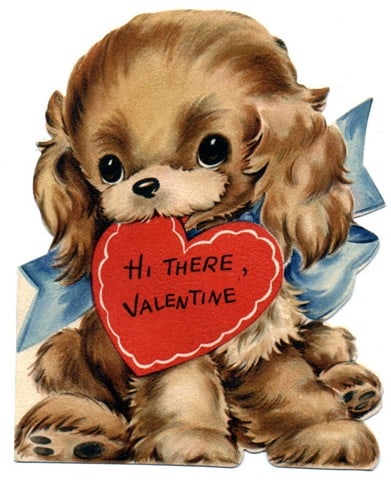 You'd have to have the cold, cold heart of a man named Rocco to not love that.

It's not that women don't like romance or grand gestures or even chocolate.

There's just something insincere about telling men, forcing them to prove their love through red roses and cheap chocolate on one of the 365 days in the year.

For most women the most memorable gestures of love rarely involve lace.  Usually it involves a beverage.  Like making you a coffee or pouring you a glass of wine, miraculously just knowing when you need it.

Maybe even on June 23rd.  Or October 5th.   Or noticing something that needs to be fixed and ... just fixing it.  At the very least calling someone and arranging to have it fixed.  Now THAT'S romance.

And don't even get me started on what a libido revver it is for a man to cup your chin in his hand as he draws your face close to his mouth and whispers "I want you to be in charge of the remote tonight."

So for right now, I've got nothin' for ya.  No red wreath made out of cutout cupids, no chocolate beverage with a homemade heart shaped stir stick.  No Valentine's dinner, dessert, printout or cutout.