Every night this week I've been up at my community garden planting the things I should have planted a month ago but couldn't because of the whole end of the world thing. When my garden was opened I figured, PHEW, everything will be back to normal now.  And then I watched a frog climb up a fence and reassessed. 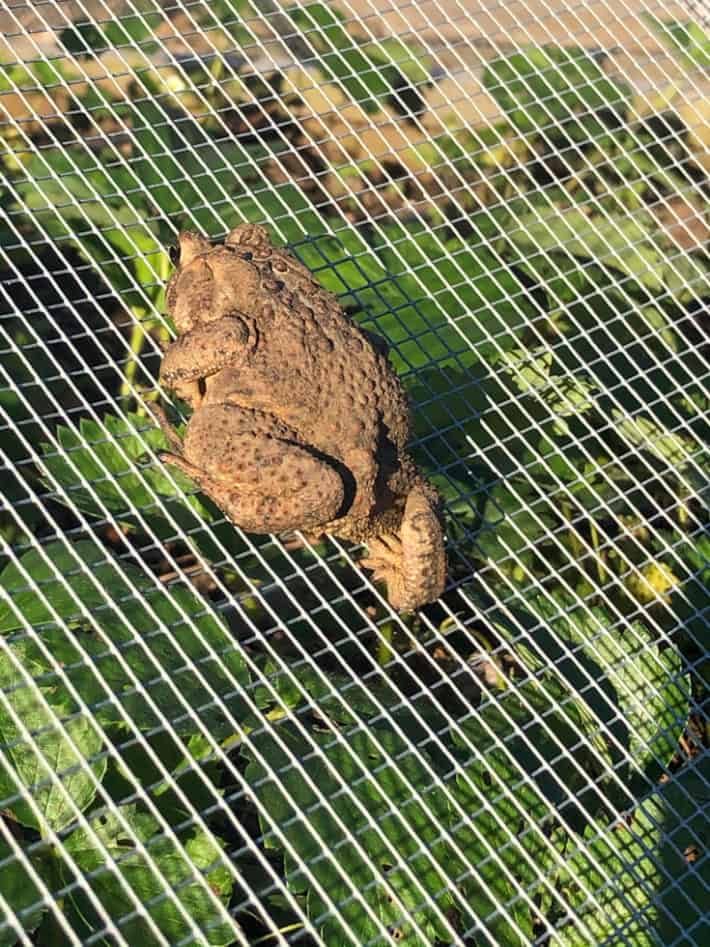 Because of this I consider myself to be a bit of an expert on none of them. Other than knowing they exist, my knowledge of toads for example is this; they are toads. I just haven't given it a lot of thought. They're probably not much different than I am. We both like to be outside in the garden, appreciate a good meal and have warts.

But that's it. That's all I know about toads.

Actually that's not true, I also know that toads are shy and tend to stay hidden until you start swinging a massive, sharp hoe in their direction at which point they will swan dive in spectacular fashion, directly at your face.

Toads, as it turns out, are quite gymnastic so I shouldn't have been surprised to see one of them climbing a fence this week - but I was.

Also surprising ... seeing a painted turtle. It was just outside of my plot, which is an unusual site.  When I got closer up to the turtle I could see it had dug a hole and was just sitting there. Half an hour later she was giving birth.

The turtle digs a hole and then buries her eggs to hide them from predators because like any mother her number one priority is to protect her children. And to remember to buy wine on the way home. 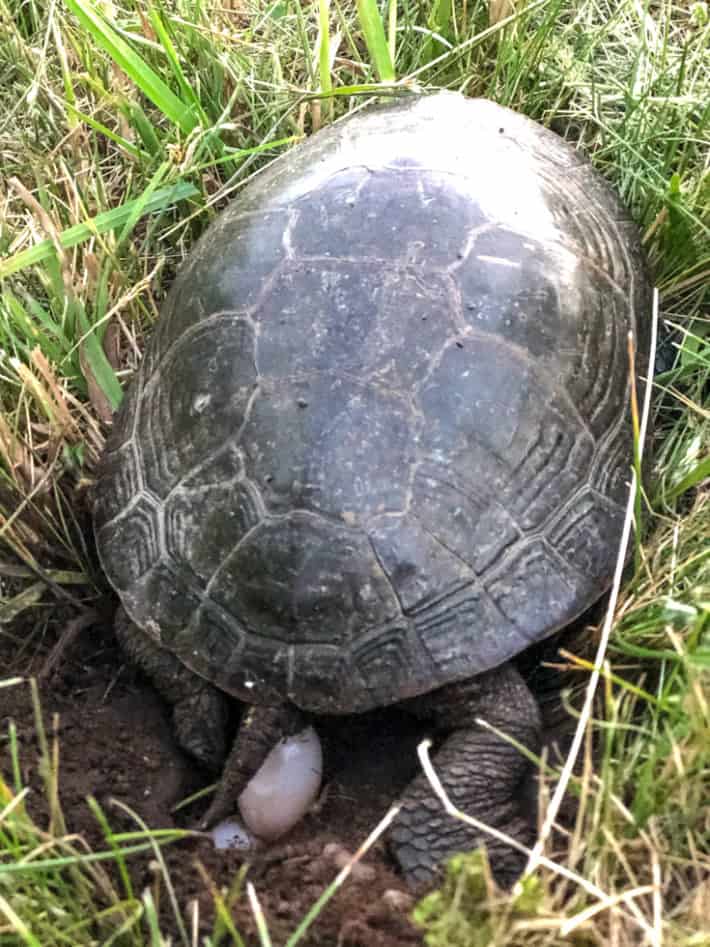 It was FASCINATING and there's video of it in my Instagram highlights.

Now, we're up to a fence climbing toad, an incredibly rare view of a turtle laying eggs so now it's time to add in the festival of snakes. 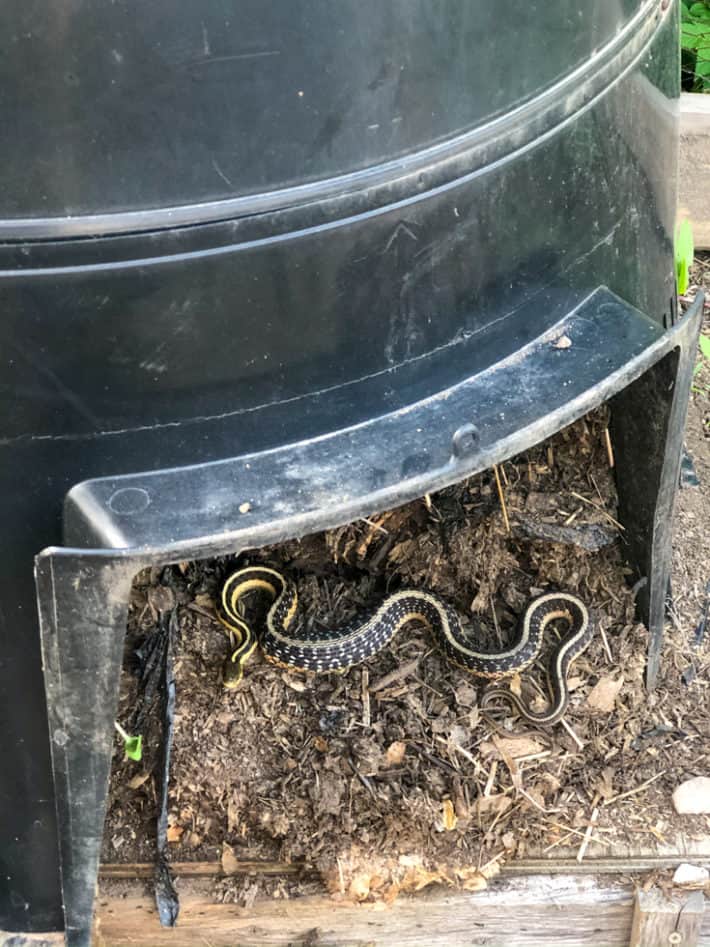 For those of you who are anti-snake I'm sorry but there is going to be another snake photo. I just thought I should warn you.  I'm not sure why I didn't think of warning you before the first photo.

So this snake, which was one of several I found in the garden one night, has claimed my compost bin as its own. Compost bins are warm and protected which is exactly the kind of place snakes like to claim as their own. A safe, cozy home makes a snake happy.

So when I went to open up my compost bin to dig some out of the bottom I tapped on the bin with my foot a few times.  You probably didn't realize that I speak snake, (nobody likes a bragger) but I do. Tapping your foot a few times is snake for "Hey. I'm here and I'm coming in, so you might wanna just slip out for a second."

He didn't care.  Or she didn't care. I'm not sure which, but if I open the compost bin next week and find it littered with socks and take-out boxes I'll have my answer. 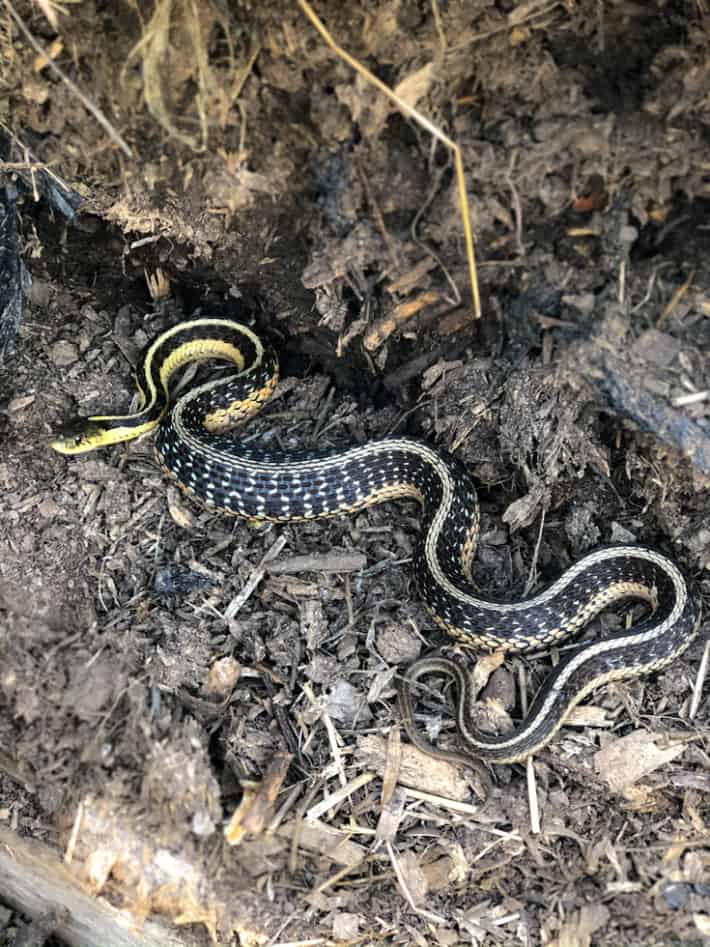 Most of this was all within half an hour of each other. It was like gardening in a low rent Floridian reptile theme park.

And the same night all this happened a neighbour told me she saw a coyote walking down the middle of the street at around 10 o'clock at night. This isn't in the country or even the suburbs, this is in the middle of a town. Things are not normal. 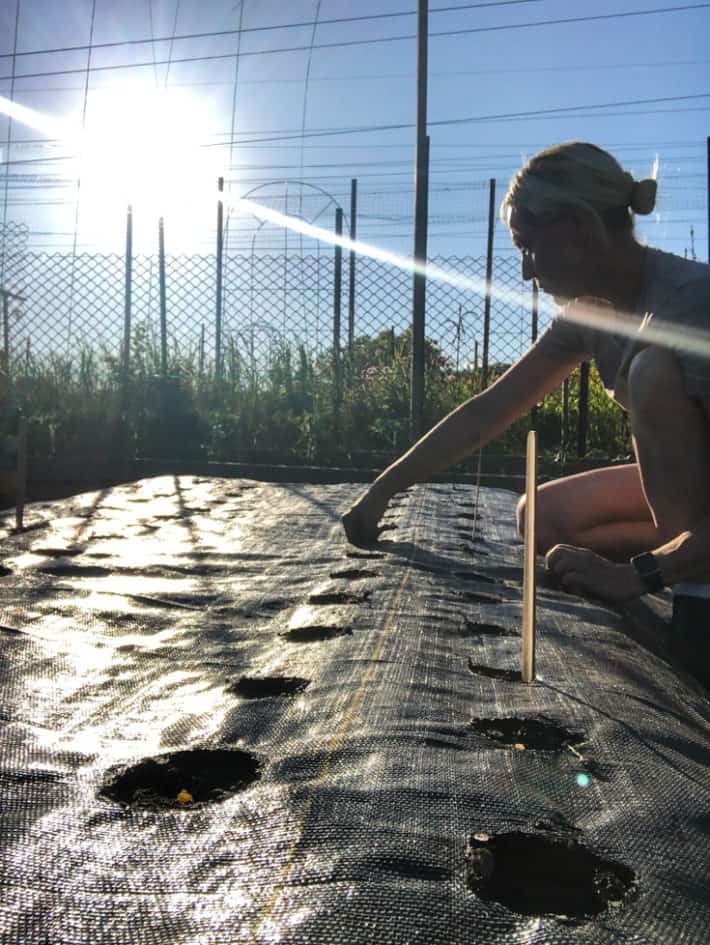 Thursday night was pretty quiet at the garden with just a constipated frog hanging around to keep me company. I could tell he was constipated.  He had that look.

I got to plant my corn. I planted way too many varieties: Dakota Black popcorn, Glass Gem Corn, Peaches and Cream corn and Serendipity corn.  I'll probably be lucky and have enough time for the sweet corns and the popcorn to mature, but I'm pushing it for the Glass Gem corn which takes a lot longer than the others to form. 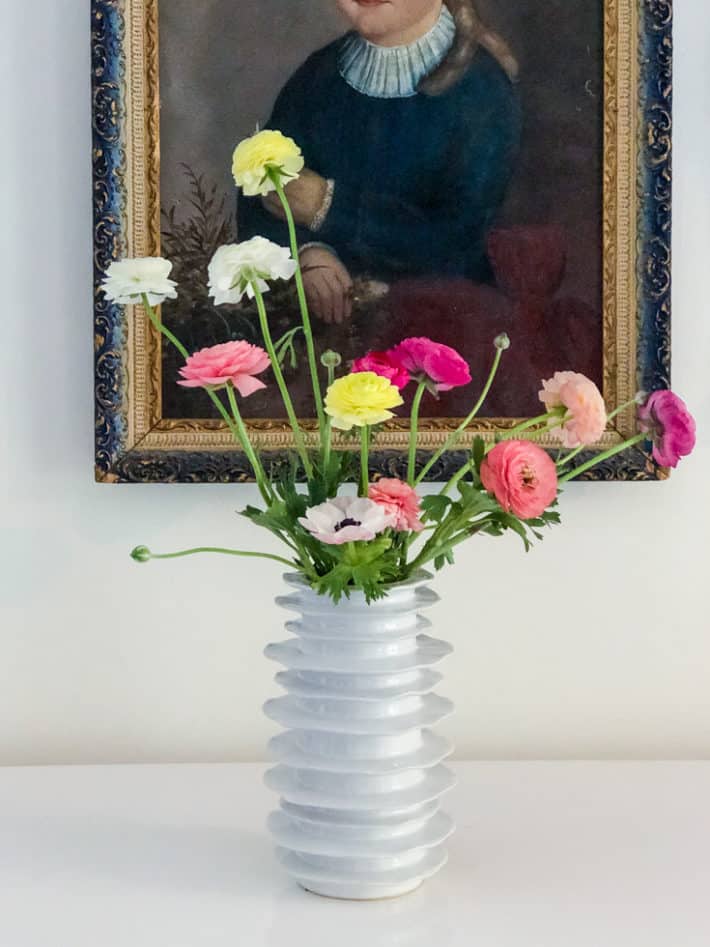 Back at home the ranunculus I bought from Dahlia May Flower farm are blooming. Over and over again, I just keep cutting them off and putting them in the vase with the others. Ranunculus have an incredible vase life, lasting for a couple of weeks so you can just keep adding to it.

Also at home, I experimented with germinating regular old mustard seed that I had in my spice cupboard. This after a fellow gardener proclaimed he had finally thought of something exciting to grow (that I hadn't already grown.) MUSTARD.

When he told me about his idea, we looked at each other with pity, sorry for how stupid the other one was at never having thought of this before.

Of COURSE we should grow mustard!! So I'll be planting some black and brown mustard seeds this weekend. 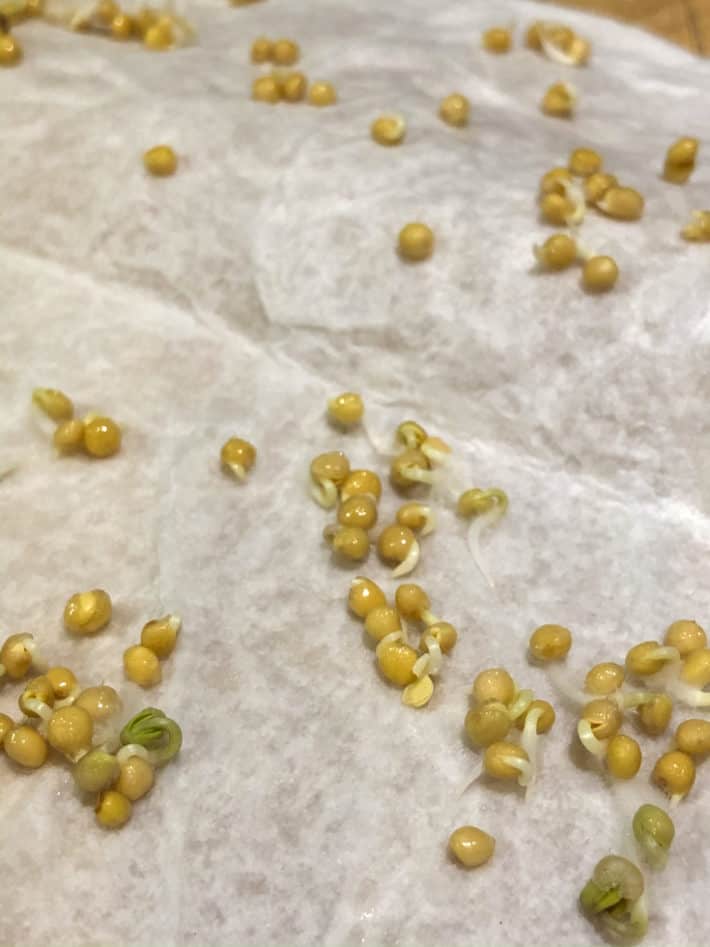 These are the seeds from my spice drawer that I germinated in a damp paper towel. I ate a few and they're spicy! They taste like a radish if a radish unloaded a machine gun in your mouth.

Even with gun toting mustard seeds, fence climbing frogs, composting snakes and egg laying turtle, this next surprise was the biggest of the week. 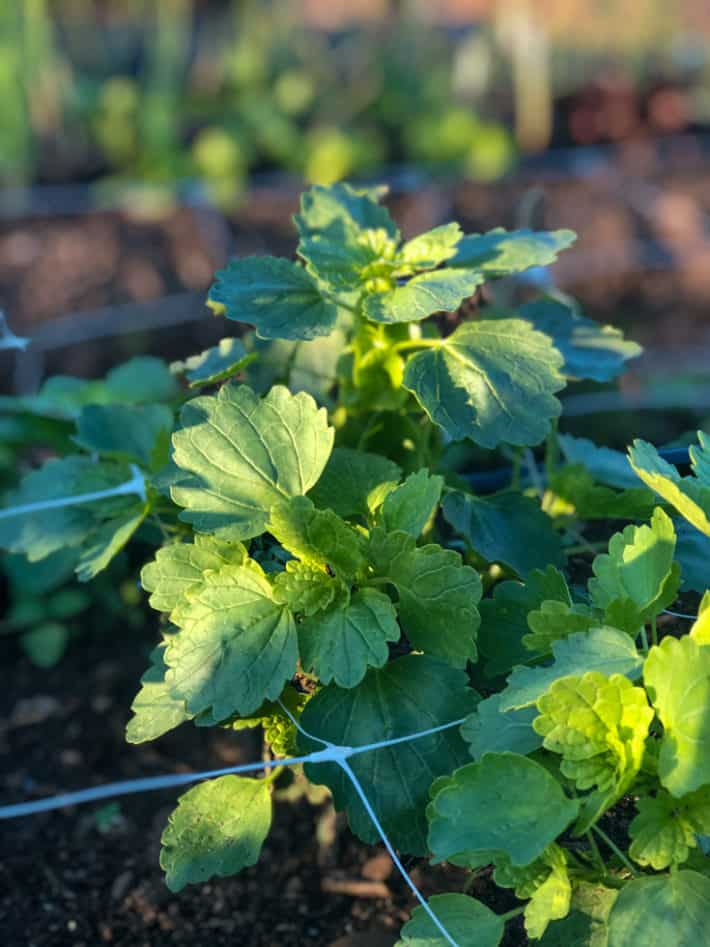 What you're looking at is a Bells of Ireland plant, grown from seed. I knew they were doubling in size every few days so they were healthy, but Thursday night when I pulled back the leaves to have a look at the plant, I found the bells.

I wonder how long those bells were stuck back there just waiting to be seen. 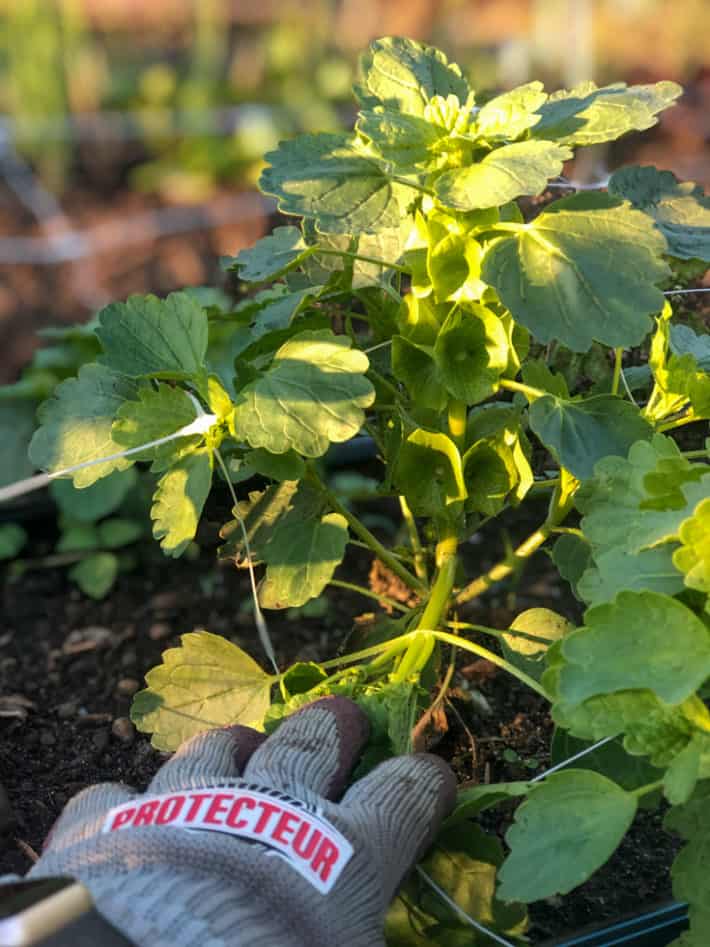 Things definitely aren't normal this year. At all.  This year we're actually comprehending that no matter how different we look we are all the same. In the important ways anyway.

We enjoy a garden, a good meal, a safe home and want to protect our kids. We are at times stunned at our own obliviousness.

We are all the same but we are not equal.

This year we are acknowledging that, feeling shame for that and trying to change that.

This year we are taking to the streets to change that.