Home » Tips » Gardening » It’s Zucchini Season! How You’ve Been Growing Them All Wrong.

It’s Zucchini Season! How You’ve Been Growing Them All Wrong.

You probably think you already know how to grow a zucchini but if you live in North America … you might not.  Here’s the way to grow zucchini to make your plants last longer, take up less space and produce more. 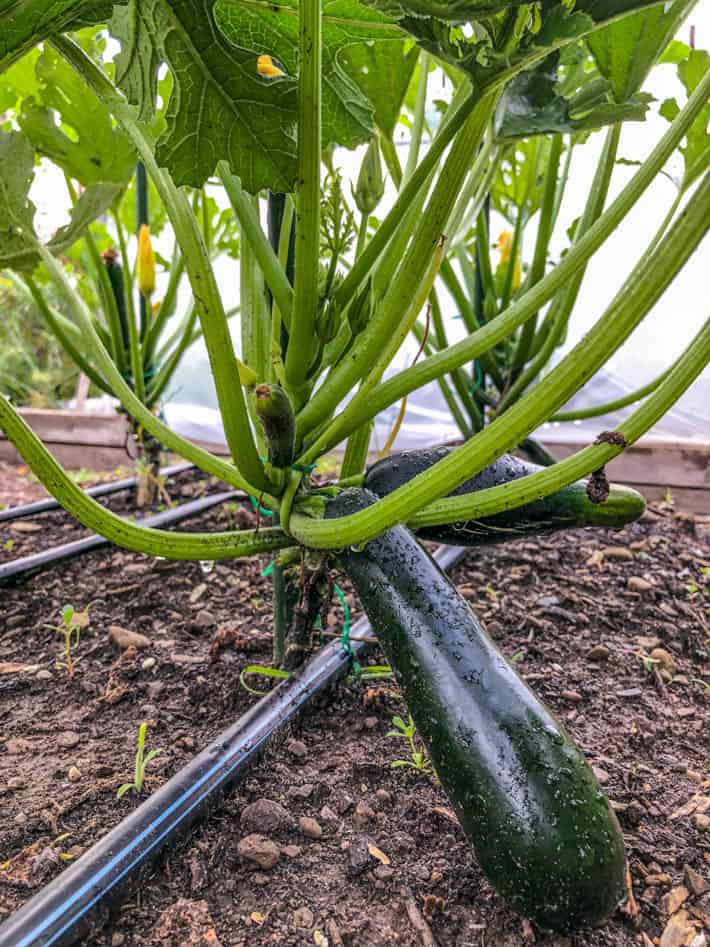 First off, this post has been shared half a million times. Why? Because it’s GREAT information on something we are all doing wrong.

Secondly … why would you want your zucchini plants to produce more, you’re asking?  Because of the obvious.  They’re fun to throw through people’s open car windows during zucchini season.

Zucchini are one of those vegetables that already produce more than you ever expect them to and seem relatively easy to grow. And they are.  But you can do a MUCH better job of growing them if you’re aware of these 3 surprising things about zucchini plants.

Most surprising of all is the fact that Zucchini can perform complex math equations.

Zucchini need to be pruned and staked.  For real. Like a tomato.

Zucchini can be planted VERY close together. 1 per square foot.

Powdery Mildew CAN be halted.  O.K., maybe not entirely halted but slowed wayyyyy down.

Plant your zucchini 1.5" apart. They aren't going to need all kinds of room to grow and sprawl anymore because you're growing them UP.

Plant a stake right next to the main stem of the zucchini plant.

Using string or twine tie the plant's stem to the stake so it grows upright.

Monitor the plant once a week to see if you need to tie it to the stem again as it grows.

Zucchini should be grown basically like tomatoes! Stake them and remove older leaves that aren't doing anything productive for the plant other than making it vulnerable to disease.

Staking is easiest if you do it when the plant is first put in the ground, but you can wrangle an older plant into submission as well.

Cut your leaves off as close to the stem of the plant as you can.

If you see signs of powdery mildew developing you can wash the plant. Yes. Wash it with water. Powdery mildew HATES water and thrives in dry, hot conditions.

Powdery Mildew can also be controlled (not cured) with this simple spray recipe:

Spray the top and bottom of the leaves once a week. 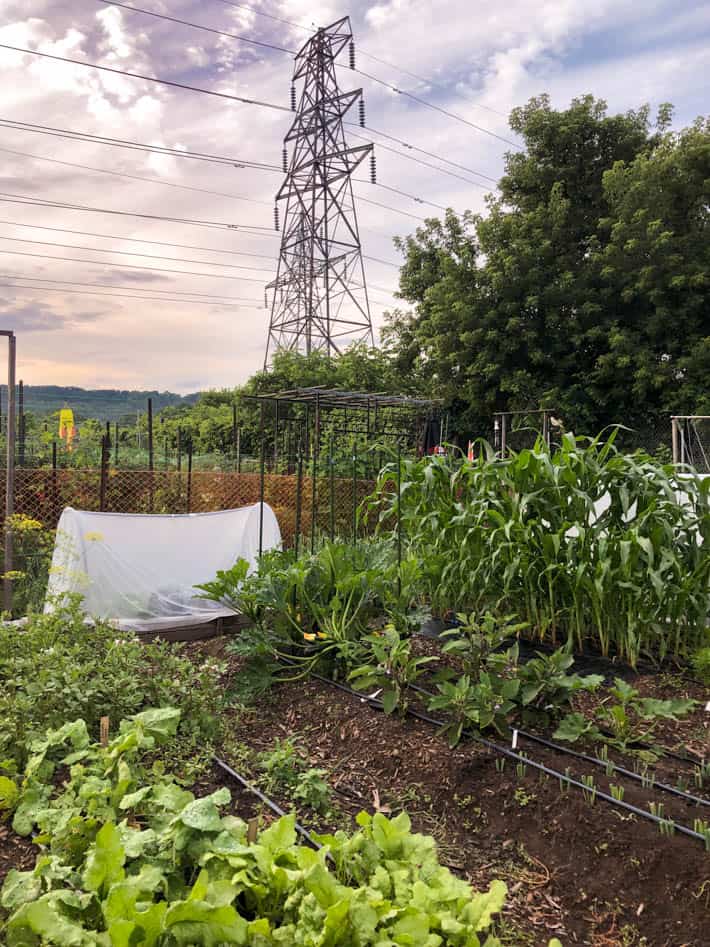 The only other plant in my garden that I prune more than my zucchini are my tomato plants.  Just like tomatoes, zucchini benefit hugely from pruning.  They’ll be susceptible to less disease, have a more open formation that allows easier access for bees to pollinate and they’ll take up less space.

It’s best to stake your zucchini when you first plant it, but you can still do it during the growing season.

Plant a stake right next to the main stem of the zucchini plant. I use coated metal stakes. You may not have noticed it before, but zucchini all come from one stem. That stem is just usually sprawled and dirty on the ground covered in decaying leaves. So you can’t get a good look at it.

But trust me. Zucchini have one stem, that can be staked just like a tomato.

The earlier you do it the easier it is though. 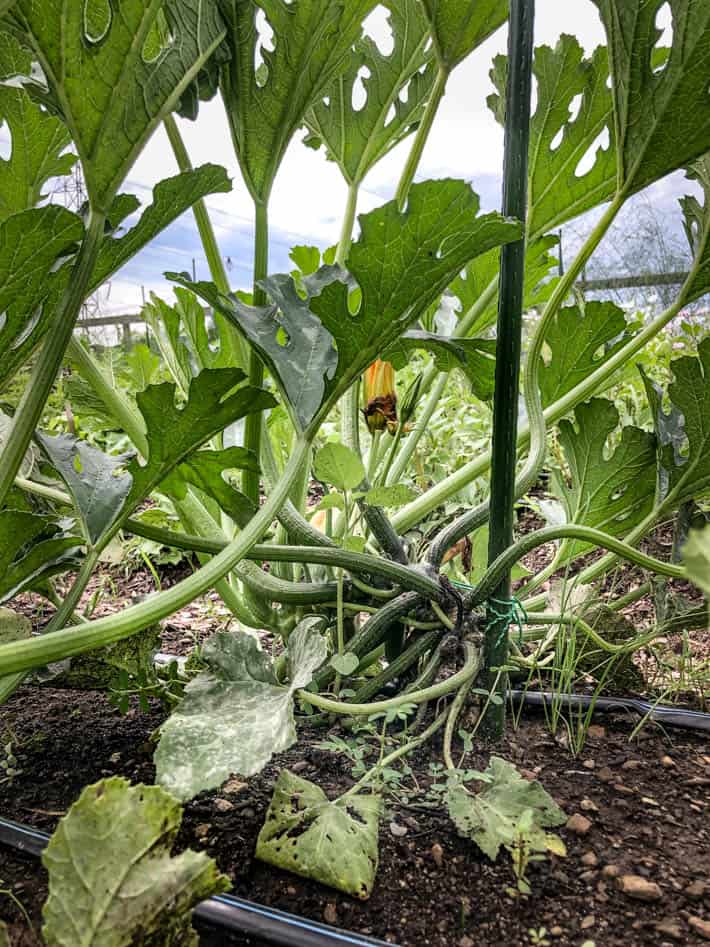 Above you can see a zucchini plant that’s only been staked and tied once, earlier in the season with the rest of the growth just flopped over.  The leaves are being eaten by bugs, there’s no air circulation and the lower leaves near the soil are getting powdery mildew. 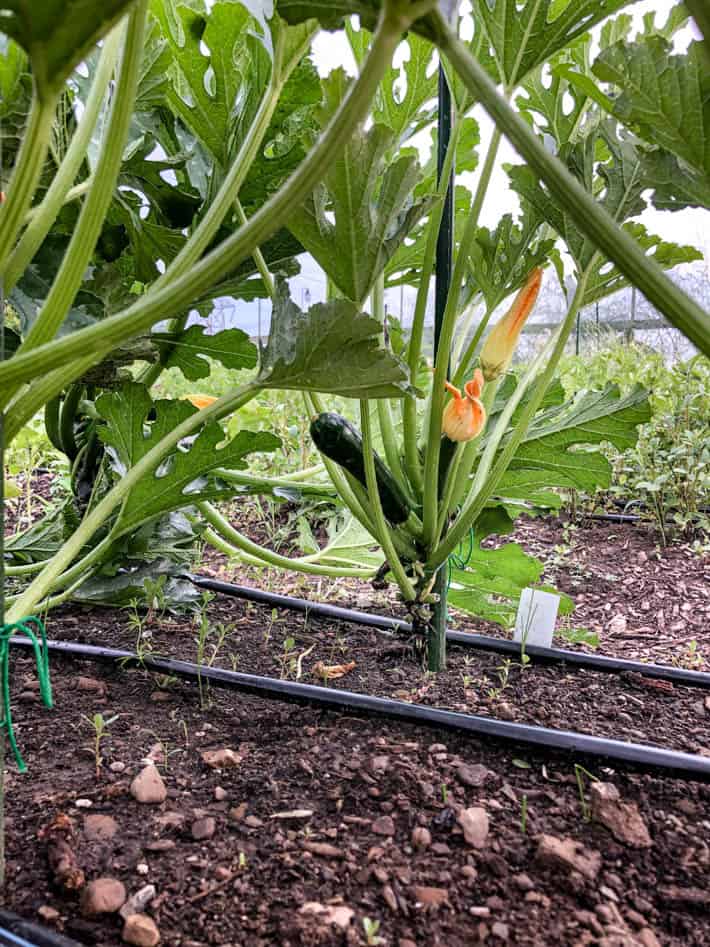 Here’s the same zucchini plant after staking it properly and removing all the lower leaves.

You can remove ALL OF THE LEAVES FROM THE STEM THAT ARE BELOW THE LOWEST ZUCCHINI. 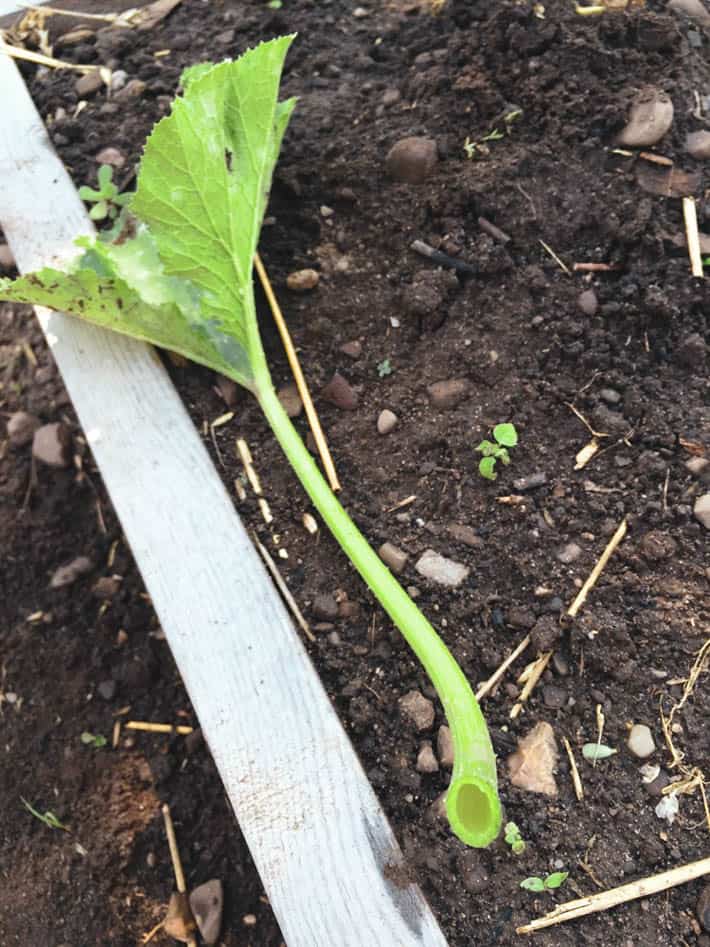 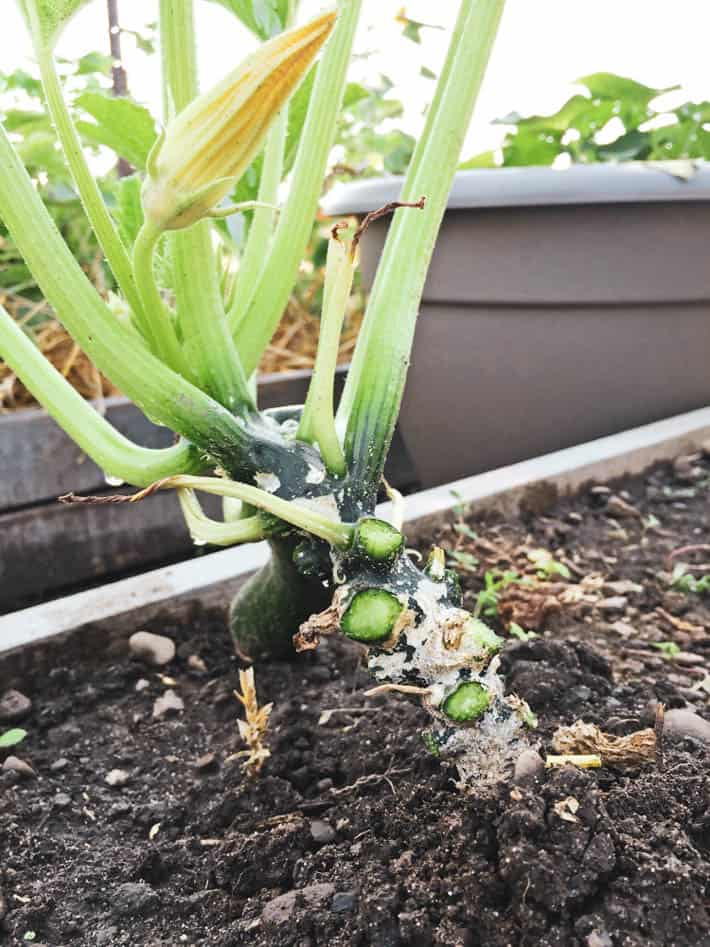 Hollow stem portions car harbour disease and bugs so make sure you get right close to the plant stem when removing the leaves.

See the difference from the left photograph and the right one?

The developing zucchini gain all their energy from ONLY the leaves growing above them. The leaves below, are just taking energy away from the rest of the plant.

Pruning away the larger, lower leaves that aren’t contributing to the plant means you can plant more zucchini in a smaller space.

Most guides tell you to place zucchini plants at least 24″ apart. You don’t need that much room between them.

If you’re staking them and pruning them this is all the room they need.

Here you can see pre-pruning and staking … 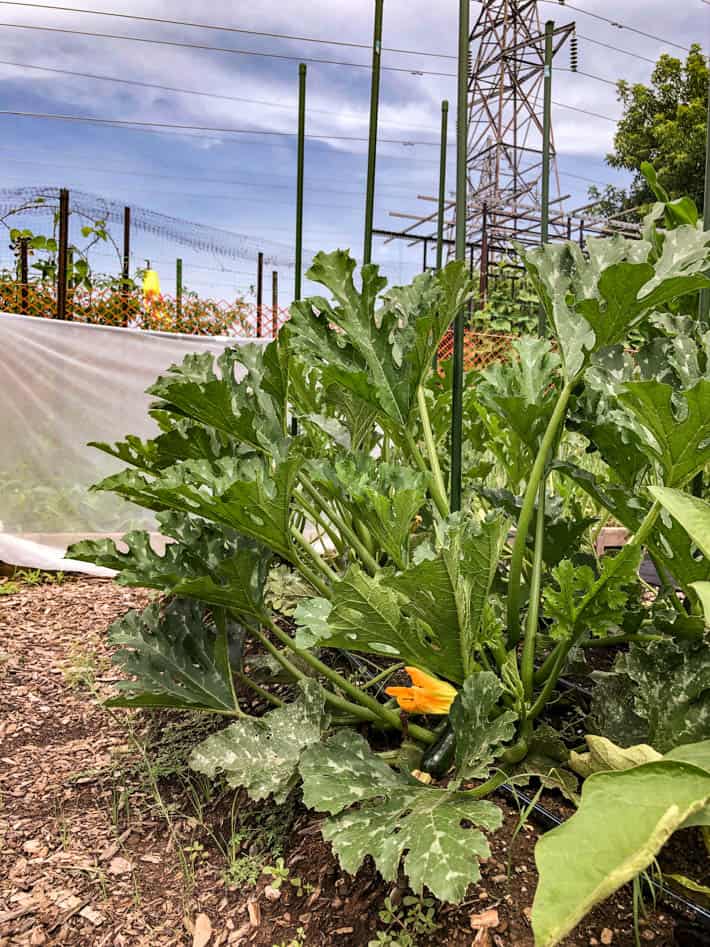 And below you can see post pruning and staking. 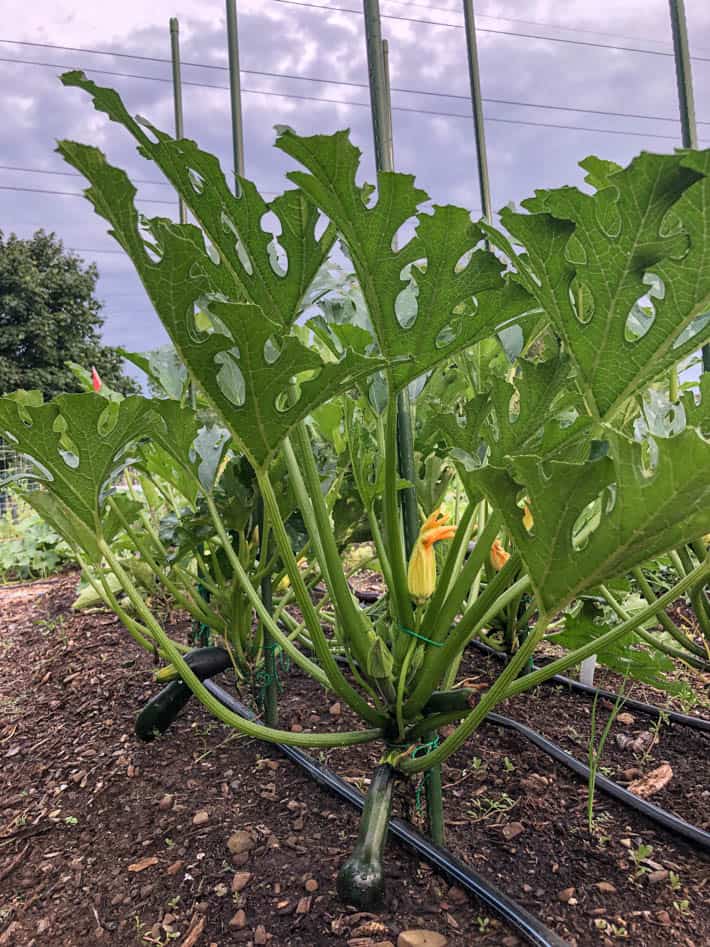 SOME MORE GOOD VEGETABLE TIPS FOR YOU

SAVE Your Zucchini and Squash from Squash Vine Borer

My Leek Growing Technique – Based on Eliot Coleman’s

Make a Soil Grader for Levelling Your Garden from a Wood Pallet.

It’s the kiss of death, but luckily it’s a long, slow, torturous death.  Most zucchini plants seem to be able to withstand powdery mildew for quite a long time.

But to make your zucchini plants last into the late summer and early fall, you can take a few steps to slow down powdery mildew.

If you’re growing zucchini plants by staking them and pruning them, you’re already doing a LOT to keep powdery mildew at bay. But for extra protection you can spray your Zucchini with a mixture of vinegar and water.  I have a full post on how to make and use the spray on zucchini here.

For some reason in North America gardeners don’t use these techniques for zucchini (pruning and staking). But in Europe it’s been the way to do it for centuries. I made that centuries part up, but I imagine it’s probably true. 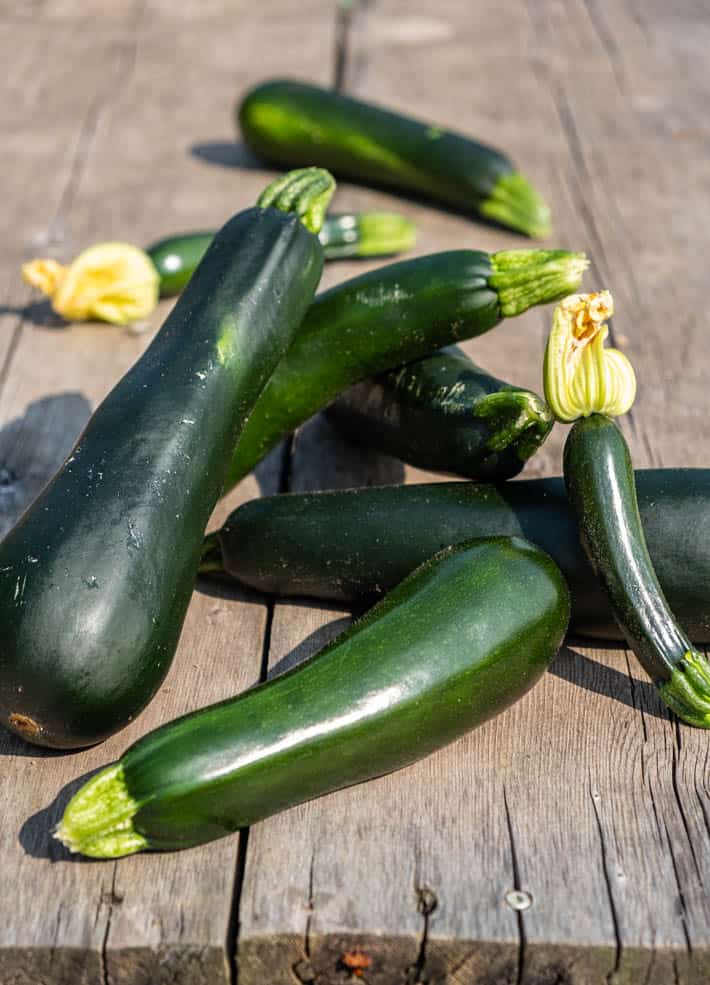 Zucchini may not be able to do complex mathematical equations but they can add up like nobody’s business. 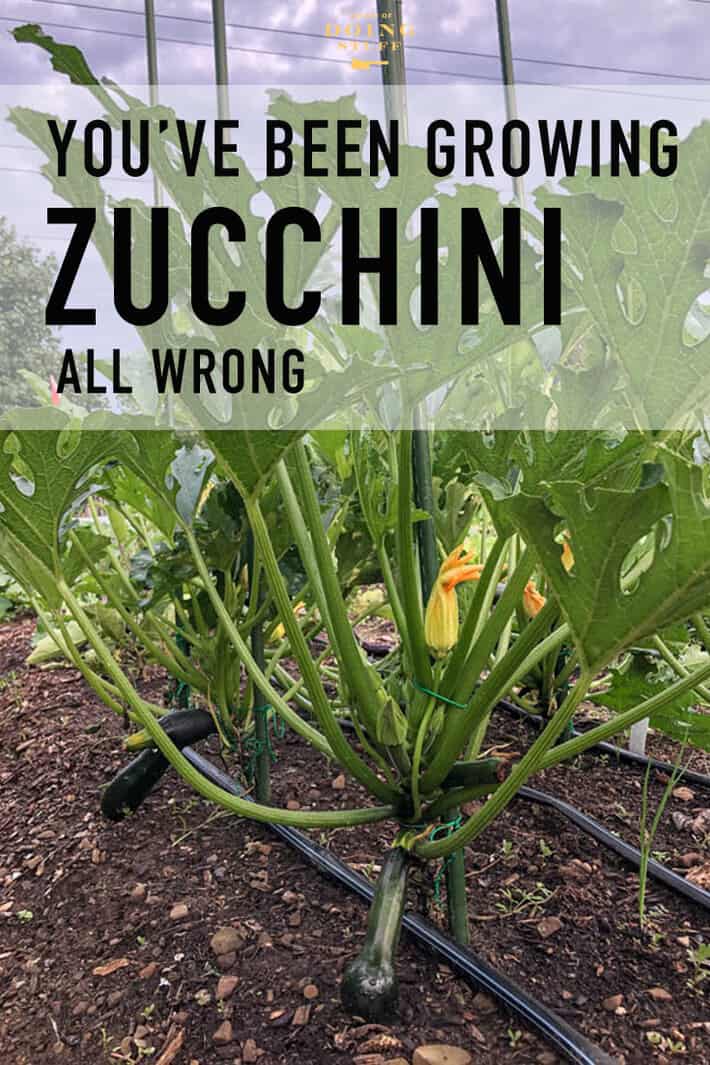