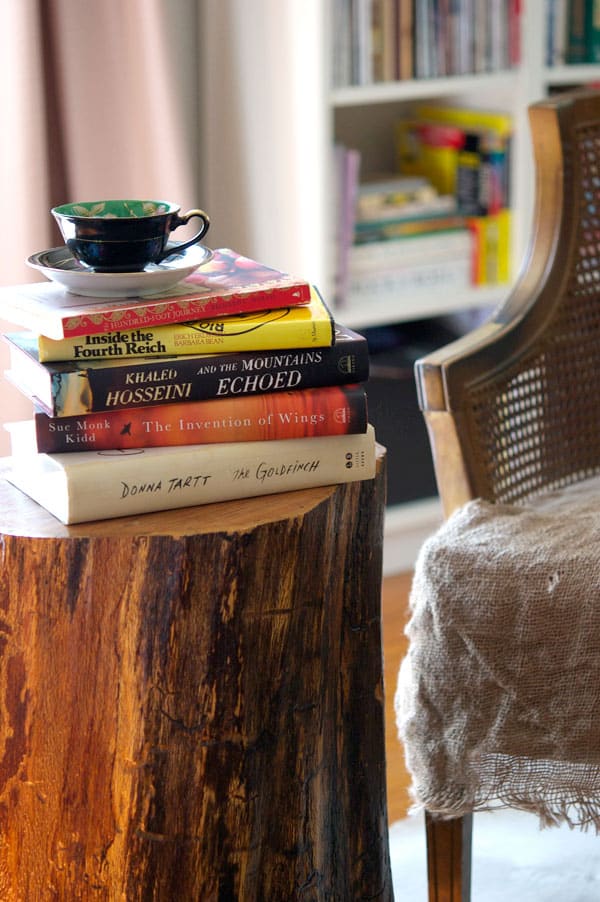 It seems to me that every time a new season comes around I feel like book reading season has finally arrived.

At the beginning of summer I think AH, I can finally sit in the sun with a book and read.

At the beginning of fall I think AH, I can finally lay on the couch with a book and read.

At the beginning of winter I think AH, I can finally sit by the fire with a book and read.

At the beginning of spring I think AH, I can finally sit either in the sun/on the couch/or by the fire depending on the weird spring weather with a book and read. While inhaling that distinct springtime worm smell.

The truth is all seasons are great book seasons for all the reasons I've mentioned above. The trick is making yourself read. I'll tell you the worst thing to happen to my reading schedule was my stupid iPad. I used to read every single night before bed. And I mean since I was a child. Every. Single. Night.

Then I discovered the allure of the YouTube videos as seen on my iPad. If for some reason I'm not completely into my book, or I think I'm getting in bed early enough to both watch videos and read … I inevitably haul out the iPad and fall asleep while watching random videos on how to remove your own inner thigh muscle or blow build your own glass bottom boat. You know. Important things we should all know about.

Which means I don't read.

So I've banished my iPad from the bedroom because I'm simply not strong enough to resist the temptations of a good 3 minute long YouTube video on how to perfectly ice sugar cookies so they look like something Marie Antoinette would approve of.

I'm back to reading every night in bed.

I've mentioned before (because seriously I've been doing this for 4 years now so I'm bound to start repeating myself) that very few things make me happier than a cupboard full of potato chips, finding cool stuff in other people's garbage, and having a whack of  books beside my bed.

Sometimes I just look at them and get excited over the possibility of reading them all, which in turns leads me into a very small panic attack because then I wouldn't have a nice big stack of books waiting to be read anymore, which in turn leads me to Amazon to feed the addiction.

My name's Karen. And my life inspired the new TLC show Book Hoarders. 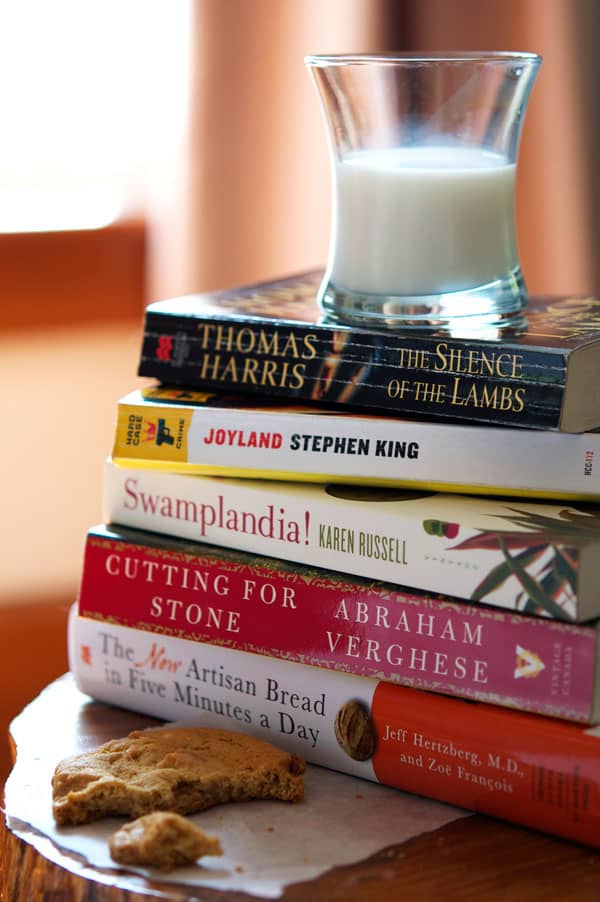 This was the second time I read Silence of the Lambs

I have no idea when the first one was but about ⅓rd of the way into the book things started to seem awfully familiar to me.  I'm assuming I liked it the first time around because I absolutely liked it this time.

I don't normally read Stephen King, but Betty convinced me to read this one.  Betty doesn't like complicated books so her choices are always good reads, but easy ones.  They're the kind of book I like to read in between heavier, heartier books.  Betty's recommendations are the lemon meringue pie to my double, chocolate layer, carmel drizzled, black forest cake. Joylandis a murder mystery that takes place in the 70's at a beachfront amusement park.  Loved it. Fun, engrossing, easy read.

"Grandpa Sawtooth, né Schedrach, bought some wildlife-infested land in Florida, sight unseen, and took his wife there to live in 1932. “A tiny crab scuttled over Risa’s high-buttoned shoe,” Ms. Russell writes of Grandma Risa’s first look at the place. “ ‘And when she didn’t scream,’ Sawtooth liked to say, ‘that’s when I knew we were staying.’ ”

I know a lot of people LOVED and recommended this book but I picked it up and put it down 3 times.  I still like the cover though so that counts for something I guess.  Swamplandia is a kindda weird and bizarre.  Or so I'm told.  I'm kind of the queen of weird and bizarre books so if that's what you're looking for you'd be smarter to give Geek Lovea shot.

Cutting for Stonetook me a while to get into but once I was there I was really there.  Great book following the lives of 2 remarkable twins in Ethiopia from birth to adulthood.  This is the book I keep thinking about.

Now the cookbook.  I understand that most people don't think of cookbooks as really great reading material, but if you like baking bread, The New Artisan Bread in Five Minutes a Day is GREAT.   It's the cookbook that my no knead bread recipe comes from, although I didn't know that when I started making it.  The story behind how this cookbook came to be and is really great and the amount of recipes that you can make from their one Master Bread recipe is astonishing.  Plus it's easy and the recipes work.  That there is my official endorsement. 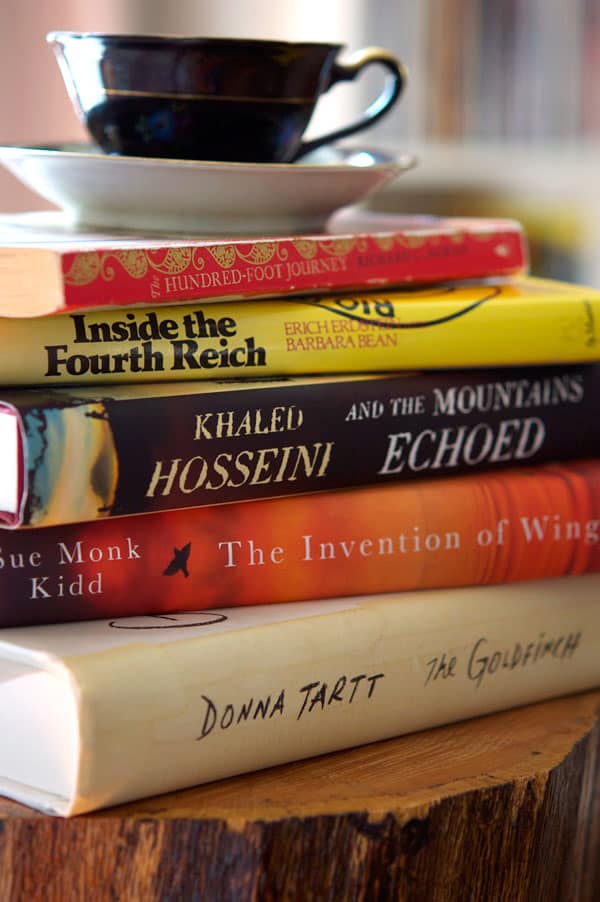 The Hundred-Foot Journeyis something I've had by my bedside for a while now but haven't read. The book revolves around a family run restaurant that goes through several generations and trials. It's based in India, England and France. I just keep waiting for the right time to read this book and I think the right time is now. This is another Betty recommendation. Sort of. Actually she liked the book but became incensed when she found out the author wasn't an actual chef. For some reason this bothers her to no end. I have no idea why. It isn't an autobiography, it's a novel. I'm not looking forward to the day I have to tell her that Frankenstein was written by a woman. Who wasn't a monster.

I have a thing about WWII and books that revolve around it.  Most of what I've read is fiction that's based on fact, but this latest book of mine, Inside the Fourth Reich(which was given to me by a neighbour who read it) is a factual based that written like fiction. It's a first person account of Erich Erdstein's life as a Jew posing as a Nazi, infiltrating German diplomatic and military circles among a litany of other undercover operations, one which landed him in jail with Aristotle Onassis.  I started this book, got distracted and put it down.  I will be picking it back up again.

I've loved everything that Khaled Hosseini has written  (The Kite Runner, A Thousand Splendid Suns) so I can't imagine his latest, And the Mountains EchoedIt is a story about family.  And it was written by Khaled Hosseini.  That's all I need to know.

The Invention of Wingsis the book I'm most looking forward to. The book was inspired by the true life story of socialite sisters Sarah and Angelina Grimke and their fight for equality and freedom for women and slaves in the early 1800's.

The only problem I'm having is I wish I'd bought the audio version instead of the hard copy. Listen to it. Just listen to it. I could listen to the reader all day long.

And finally the winner of the 2014 Pulitzer Prize,  The GoldfinchI've been holding onto this latest book from  Donna Tartt for quite some time and started reading it a few nights ago.  Last night I stayed up until 2:30 in the morning reading it.

Here's the synopsis from Amazon.

Theo Decker, a 13-year-old New Yorker, miraculously survives an accident that kills his mother. Abandoned by his father, Theo is taken in by the family of a wealthy friend. Bewildered by his strange new home on Park Avenue, disturbed by schoolmates who don't know how to talk to him, and tormented above all by his longing for his mother, he clings to the one thing that reminds him of her: a small, mysteriously captivating painting that ultimately draws Theo into the underworld of art.

Anything that has me awake at 2:30 in the morning and doesn't involve the stomach flu is something to be taken seriously.  I've been warned the book drags on in some place and could have been say, 500 pages shorter, but I'm prepared.

I have my iPad fully charged.