Home » Garden » How To Get Rid Of Powdery Mildew. (Organic Treatment)

How To Get Rid Of Powdery Mildew. (Organic Treatment)

As you peer over your zucchini leaves you notice white spots.  Hmm. Weird you think.  A few days later the whole leaf looks white and more and more of them are covered in spots. You have powdery mildew. Well, your plant has it actually. Here’s how to identify, treat and prevent powdery mildew.

I would like to draw your attention to the photo at the top of this post. There it is.  The dreaded powdery mildew.  Be GONE!  Be GONE I say!

That didn’t work at all. Although it might have worked on my favourite jeans because I can’t find those.

🍃 What is Powdery Mildew?

There are actually all different types of powdery mildew that affect different plants. Cucurbits have their own type, phlox its own and so on.

It’s caused by different fungi spores that make their way to your plants through the air and from splashing up from the soil when it rains.

The fungi alone isn’t  harmful, but once it gets onto your plants it germinates and starts feeding by sucking nutrients from the surface of the plant leaves. That’s why the leaves from a plant with powdery mildew eventually start turning yellow, crispy and die. They’ve had all the nutrients sucked out of them.

Powdery Mildew likes low light and temperatures from 20°- 30°C  (68°- 86°F) with high humidity (over 95%.) However when the temperature gets above 32°C (90°C) some of the spores die.  So it likes hot weather but slightly hotter than hot weather will kill it.

Unlike most mold and mildew that you think of, powdery mildew actually thrives in DRY conditions. It doesn’t like or reproduce well when wet.

🙅‍♀️ How to Prevent Powdery Mildew

So now that you  know the conditions that powdery mildew likes, try your best to avoid those.  How?

This really does work. I'm not speaking anecdotally. All my gardening techniques and tips are 100% tested and experienced by me in my own garden.

The reason behind the effectiveness of this spray is pretty simple. Powdery mildew can’t grow in wet conditions, so when you spray the leaves with water you’re creating a cruddy environment for them to grow in plus washing some of them literally off of the leaf.

The vinegar alters the pH of the water and spore that it hits which it also hates.

These two things combined are what stop the powdery mildew in its tracks.

Since jumping up and down and screaming doesn’t work to treat powdery mildew you’re going to have to mix up a potion to spray on the leaves.  Like a witch.  Or a Cher.  Cher seems like a potion maker.

Because the disease only affects the very surface of the leaves, a foliar spray treatment works really well.

Spray the top and bottom of the leaves once a week.

The reason behind the effectiveness of this spray is pretty simple. Powdery mildew can’t grow in wet conditions, so when you spray the leaves with water you’re creating a cruddy environment for them to grow in plus washing some of them literally off of the leaf.

The vinegar alters the pH of the water and spore that it hits which it also hates.

These two things combined are what stop the powdery mildew in its tracks.

Just fill a spray bottle with the water and vinegar solution and leave it in your garden so it’s always there ready and willing to perform its potion duties.

It takes one minute to spray an entire zucchini plant.  That’s less time than you spend cursing at your zucchini plant because it produces so many zucchini you’ve started to force yourself to eat zucchini cereal every morning.

The other thing you should do to keep your zucchini healthy is to take its blood pressure regularly.  No, wait, that’s elderly parents.

No, with zucchini you should remove all the leaves that are below the fruit and stake it. You can read my whole guide to growing zucchini  where I explain that you do indeed need to pinch and stake your zucchini plants, just like you do a tomato plant.

The photos in this post are from before I discovered staking zucchini.

Pruning the zucchini leaves that are full of powdery mildew should be done by the base of the vine. Don’t worry about cutting them off. Any leaves below that lowest fruit can and should be removed even if they’re perfectly  healthy.  You don’t need those stinkin’ leaves.  And neither does the plant.  The only thing you should be a bit careful about is that you cut the leaves off with a sharp knife or scissors and cut stem as close to the base as possible.

Becauseeeeee …. zucchini leaf stems are hollow, until they get right to the base of the plant.  If you cut leaf stems off at a point where they’re still hollow it’s more prone to disease.

The growing zucchini are only using the stems ABOVE it for energy.  The ones below the growing fruit do nothing other than look ugly, wither up, die, get powdery mildew and spread disease.

So they’re useless.  Get rid of them.

Do these two things, the potion and the proper staking and pruning and you’ll be picking all summer.

(I’ve experimented with a lot of ways to reduce powdery mildew and this is the most effective and easiest.  A solution of milk and water also works and even has some preventative qualities to it, but you can’t leave a spray bottle of milk out in your garden for weeks. You have to mix it up fresh every use)

Mix a container with 60% water and 40% milk (or whey).  Apply on top and underside of leaves weekly.

Now of course, if your plant is getting powdery mildew but you’re already so sick of zucchini that the thought of them is making you gaggy, you should go with your original inclination of shouting and swearing at the plant.

The plant’ll be dead within a couple of weeks and you will soon be able to move onto shouting and swearing at your tomatoes. 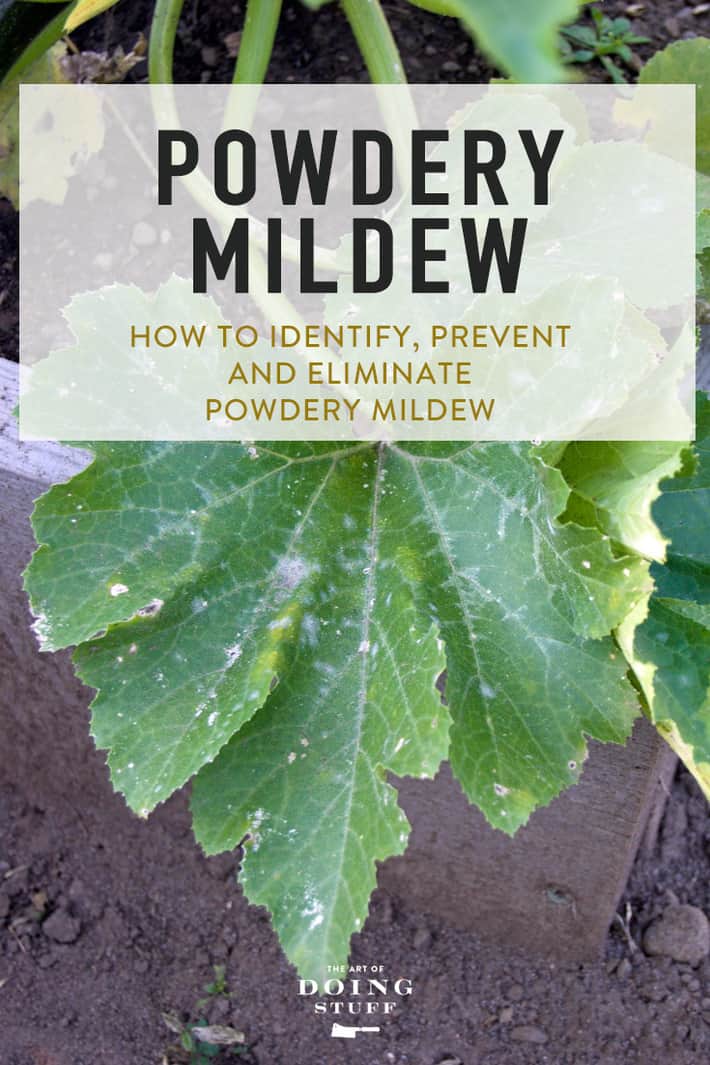