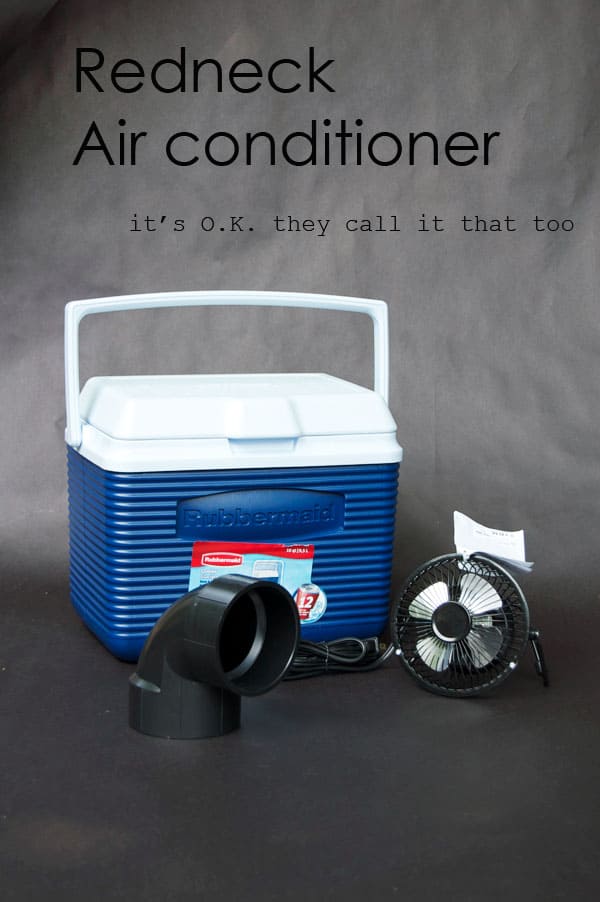 If you ask people in the rest of the world to describe the weather in Canada, 90% of them would say it's cold with a chance of hockey.  Even though I made that percentage up, based on my own experience I know it's true.  I think there's some confusion, in the United States especially, due to the whole celsius versus fahrenheit thing.  When we say it's 30 degrees in Canada in the middle of summer we don't mean 30 degrees fahrenheit. We mean 30 degrees celsius.  Although some of us do mean 30 degrees fahrenheit because even though it's been over 40 years since the country switched from imperial to metric, most residents are still kind of suspicious of it.

Collectively we seem to have agreed to accept celsius as a measurement of temperature and kilometres as a measurement of distance.  Beyond that we're mostly confused.  If you asked me to tell you what I weigh in kilograms I'd have to jump on one of those hanging grocery store scales and ask someone to read it out loud to me.

But back to this whole temperature thing.  30 degrees celsius, which it regularly is in my part of Southern Ontario during the summer, is approximately 86 degrees fahrenheit.  When you factor in the humidity that's common around here, the day could feel more like 101.  So air conditioning is not a luxury in many parts of Canada, it's a necessity.  Yes.  Summers in a lot of Canada are hot.  Very hot.

But air conditioning is a necessity that not everyone has.  I, for one, didn't have central air conditioning until 3 years ago.  Up until then I had a window unit in the bedroom and the dining room and a really good relationship with my air conditioner owning neighbours.  In the summer you can tell how many families don't have air conditioning by counting the number of people sitting cross legged inside the grocery store ice cream freezer.

The mini air conditioner I'm going to show you today might not cool off a whole house, but it will help cool off a tent (which can get STIFLING hot) while you're camping or in my case ... a chicken coop.

People always ask me how I keep the chickens warm in the winter, but chickens don't need anything to keep them warm in the winter.  They're fine with the cold.  It's the heat that'll kill them.  So at least 3 times a summer, I have nights where I have to keep their coop doors open and run a fan on them.  I have a screen that goes in place of the coop doors, and even though it's really secure I don't like the idea of raccoons running around being able to see the chickens in there at night so I'm constantly waking up and running down to check on them.

After about a year of researching different options I've decided I'll probably install a solar powered roof vent.  I don't know when I'll get around to doing that so for now I'm using this ridiculous homemade redneck air conditioner.

It costs about $20 to make and works.  The ridiculous thing works.  The bigger your cooler, the more ice it can hold, the more effective it will be.  Mine is just a tiny one because I wanted it to fit in the coop.

Here's how you do it and what you need. 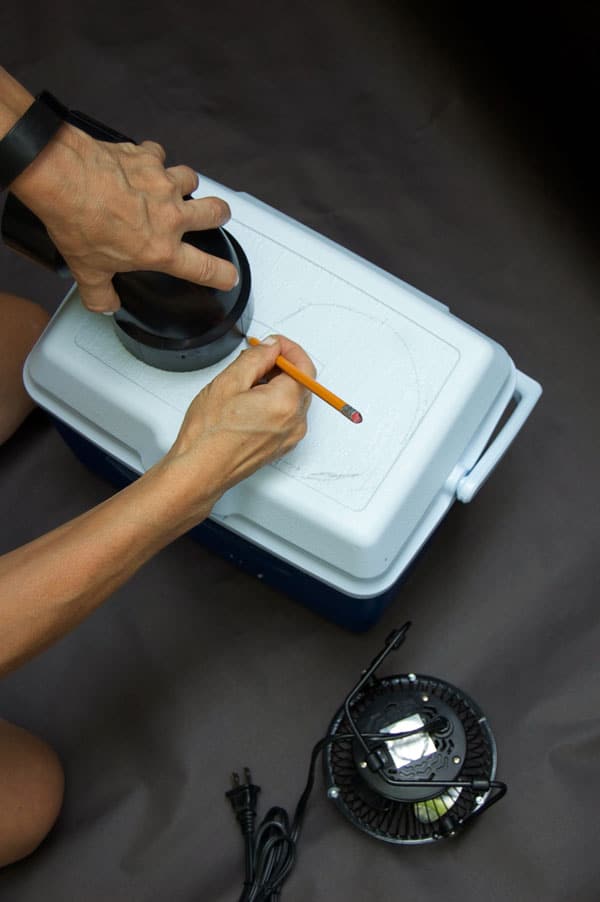 You need to cut holes in the top of the cooler for both the fan and the PVC elbow, so put them on the cooler and mark their size with a pencil. 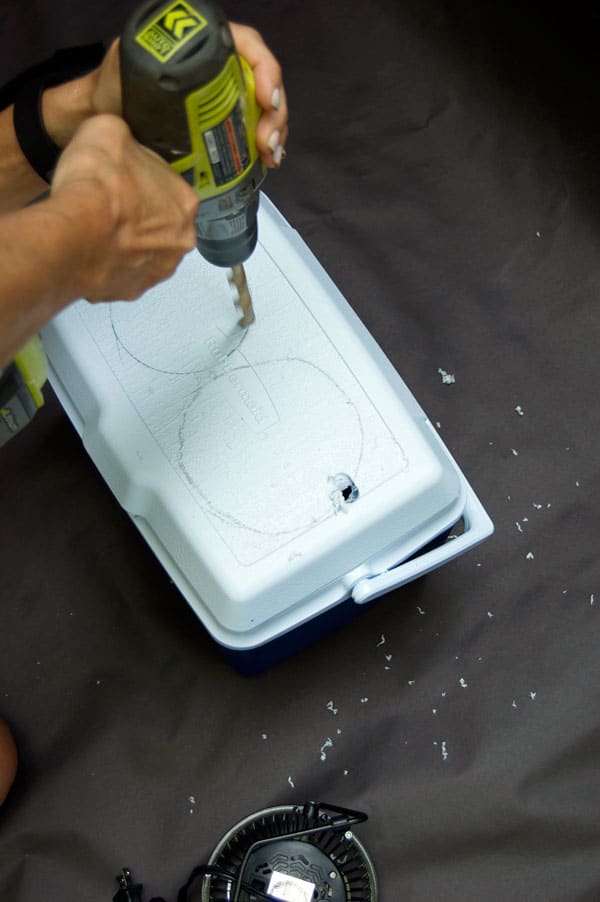 Before cutting the holes out with a jigsaw, drill a large hole into the lid.  This will give you a place to put your jigsaw blade in to start cutting. 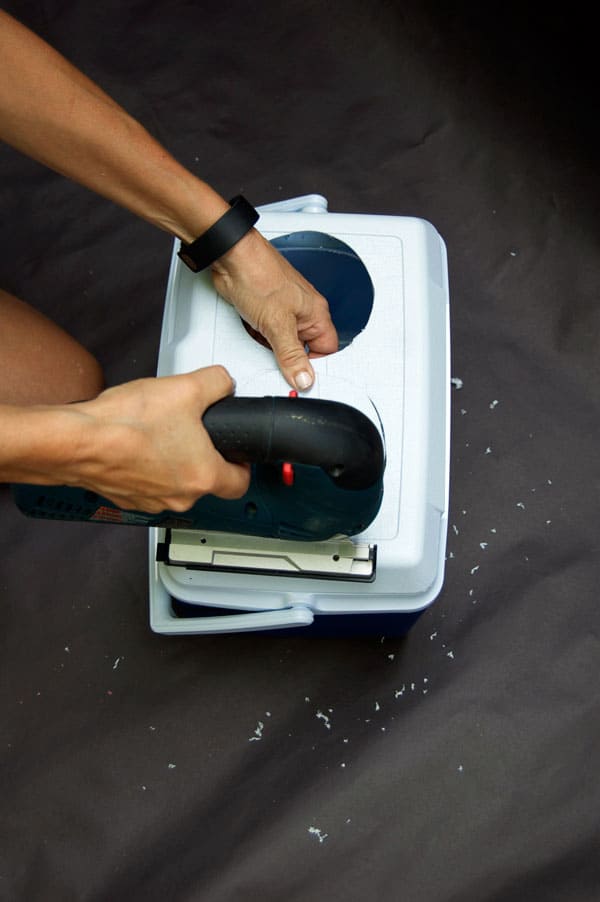 Cut your circles out.  I use this Bosch. Bosch makes the VERY best jigsaws around. Ask anyone. 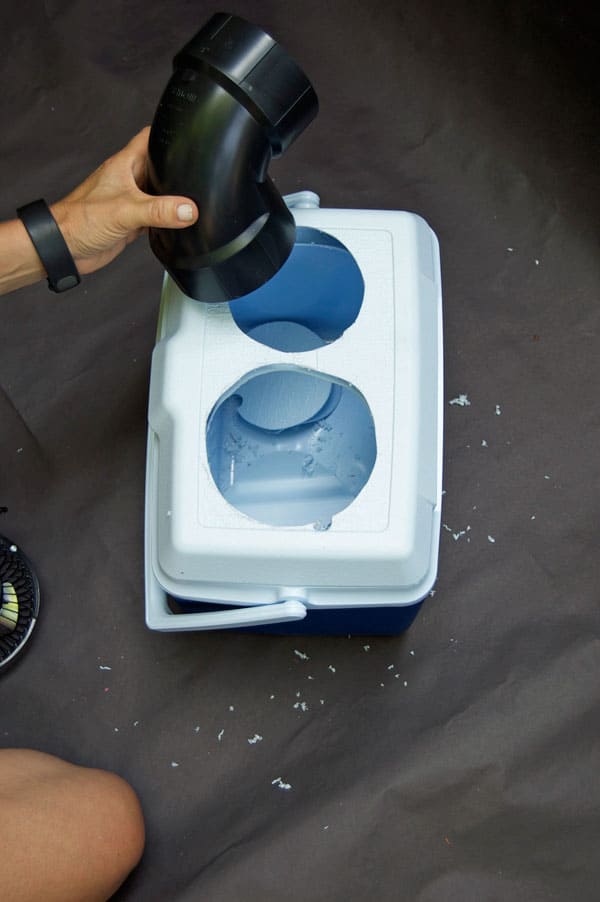 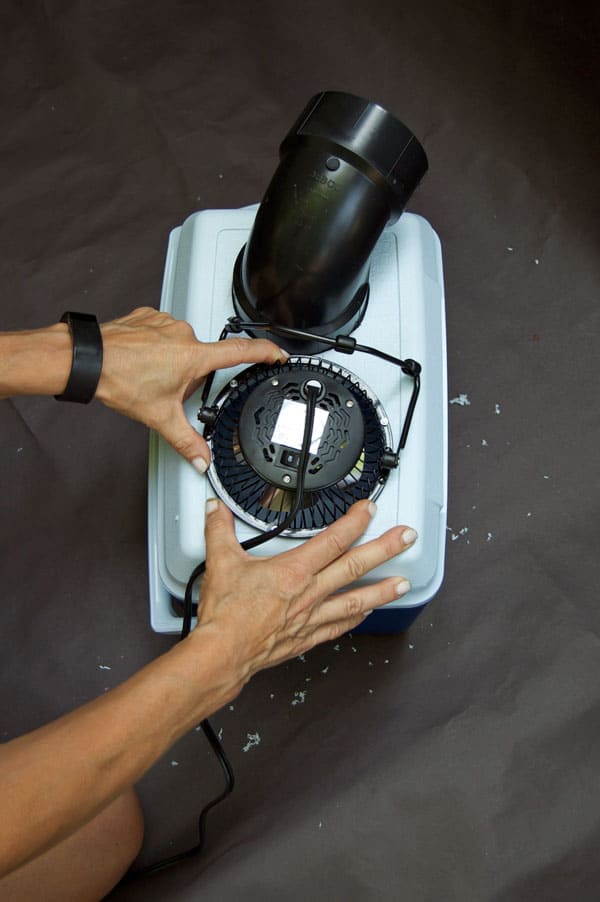 ... and your fan, and put them in the holes to make sure they fit. 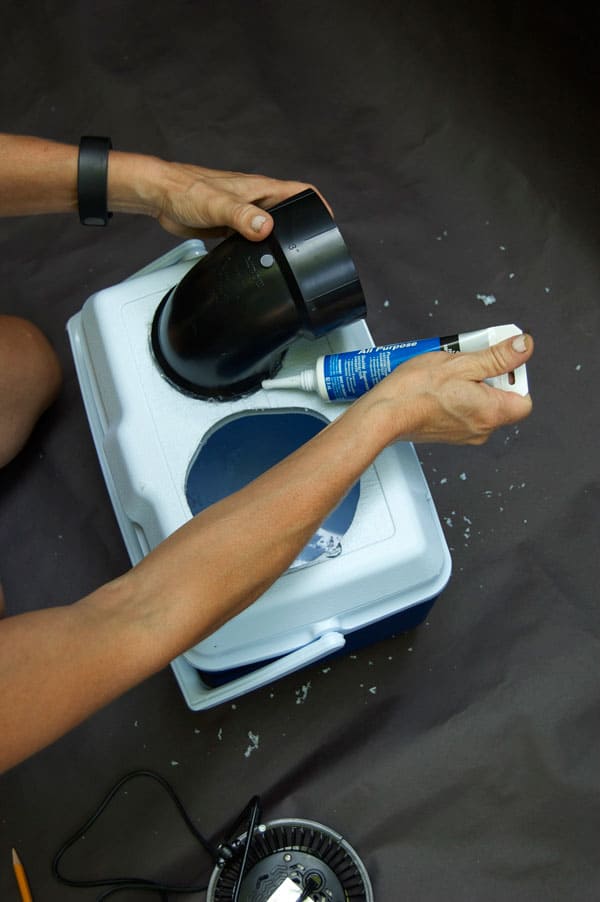 If you cut correctly the fit will be tight.  To keep everything sealed and in place, run a bead of silicone around the elbow and the fan. 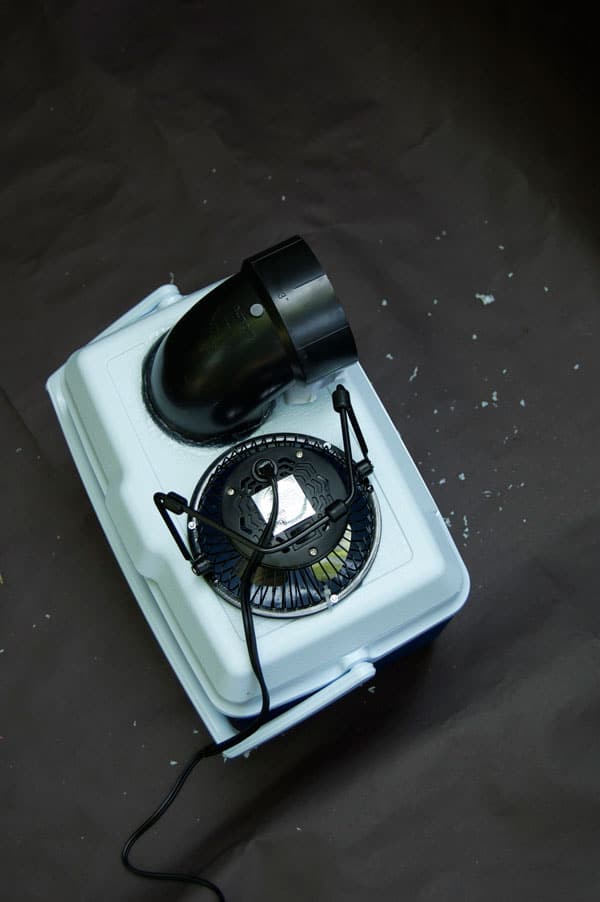 If you wanted to make this extra fancy you could cut the plug off of the fan and wire it to a 12V (car) battery.  That way it can run even when you don't have a power source nearby.  Like in a tent.  To be super-extra-crazy fancy you can wire the 12 V battery to a solar panel so your battery will always be charged. 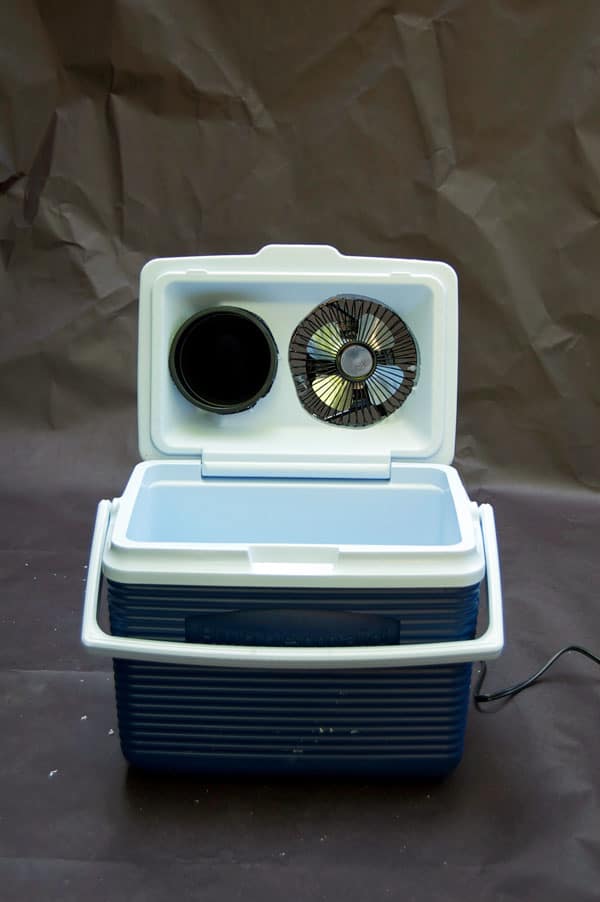 In case you were wondering this is what it looks like from the underside of the lid.

Just add ice.  You now have a mini air conditioner. 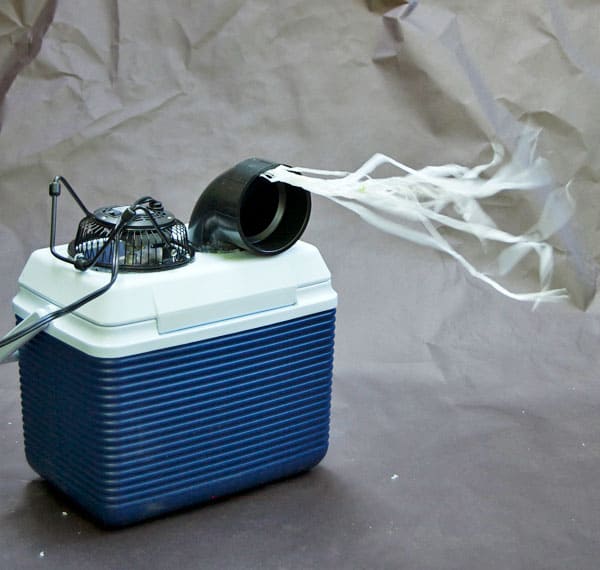 I know there's going to be some smart ass that says That ain't no air conditioner! An air conditioner removes heat from the air using a discombobulator skimmy coil, it doesn't blow cool air around, that's just a fan with some ice, NOT the same thing.

I gave the air conditioner a test run the other night in the coop. 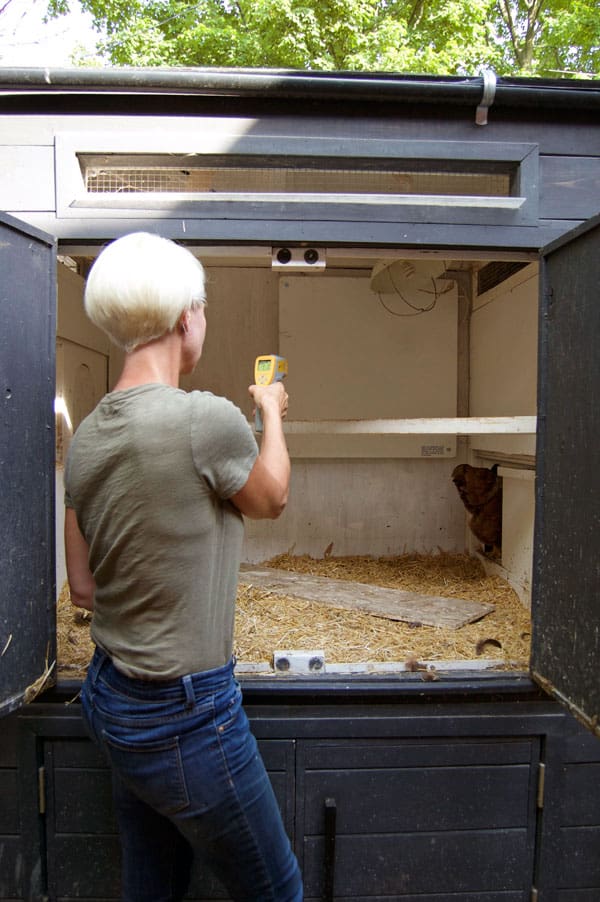 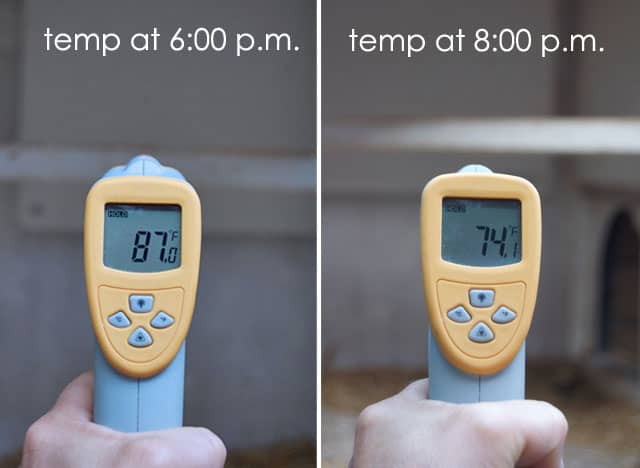 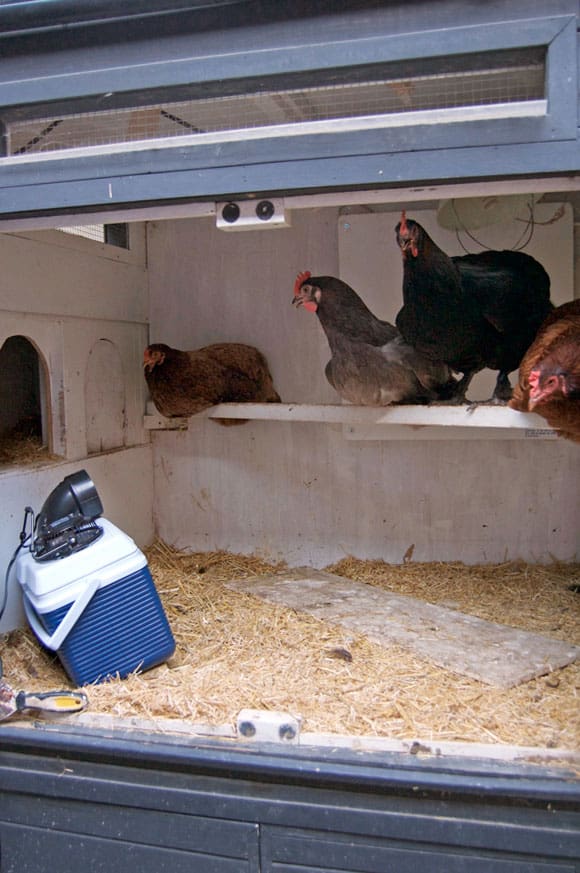 It's compact and easy to move around, doesn't take up much space in the shed when I'm not using it and doesn't weigh much even when it's filled with ice.  Of course, I have no idea what it weighs in kilograms.  2 pairs of hockey skates, maybe?