Batman, Superman, and Wonder Woman might want to think of trading in their regular superhero capes for a swath of row cover. Because this fabric, as diaphanous as Anderson Cooper's temples, can protect against anything.  Even the sinister Leek Moth. 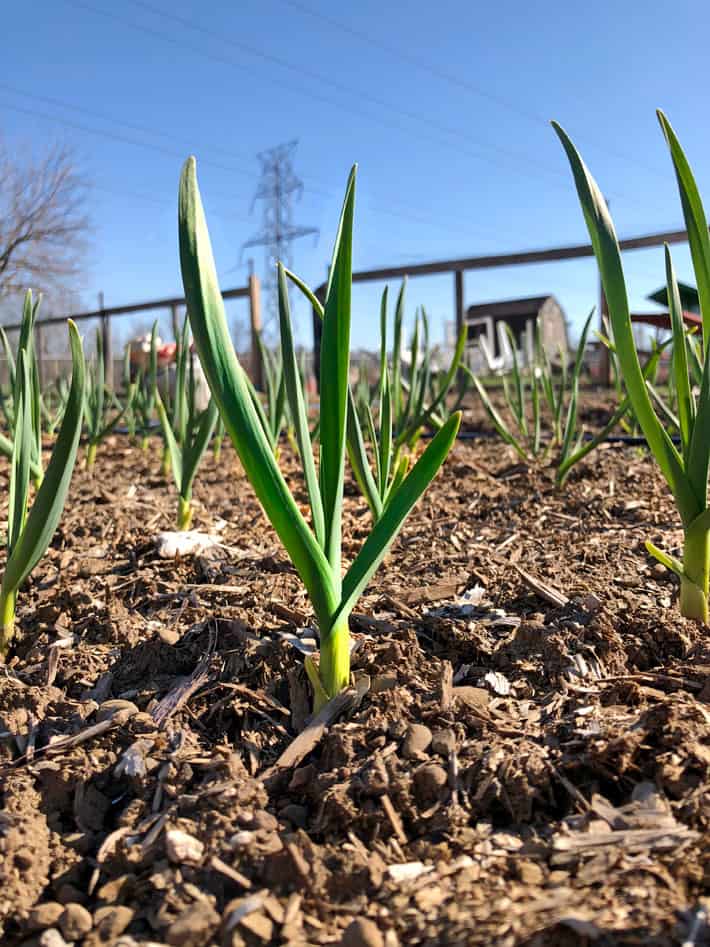 Go right to the tips.

You buy your leek and onion seedlings, maybe you even start the seeds yourself, and you spend hours planting hundreds of the tiny things in orderly rows.  You water them, weed them and feed them.  They are growing and looking great and you're quite prideful of the fact that you are the most talented gardener that ever lived.  You should probably write a book.

And then one day as you wander around your garden, sporting your "I Garden So I Don't Kill People" t shirt, you notice things aren't looking quite right.  Your onions or leeks seem a bit unhealthy.  Maybe they just need water.  So you water them.

A few days later they look less healthy.  So you give them a gentle stroke with your magical, miraculous gardening hands and the entire plant top flops over.  The neck is like mush, now that you take a closer look, and the leaves are scarred with some sort of stripes.  You stand, staring down at the plants thinking - you are in fact the least talented gardener that ever lived.  You should probably never write a book. 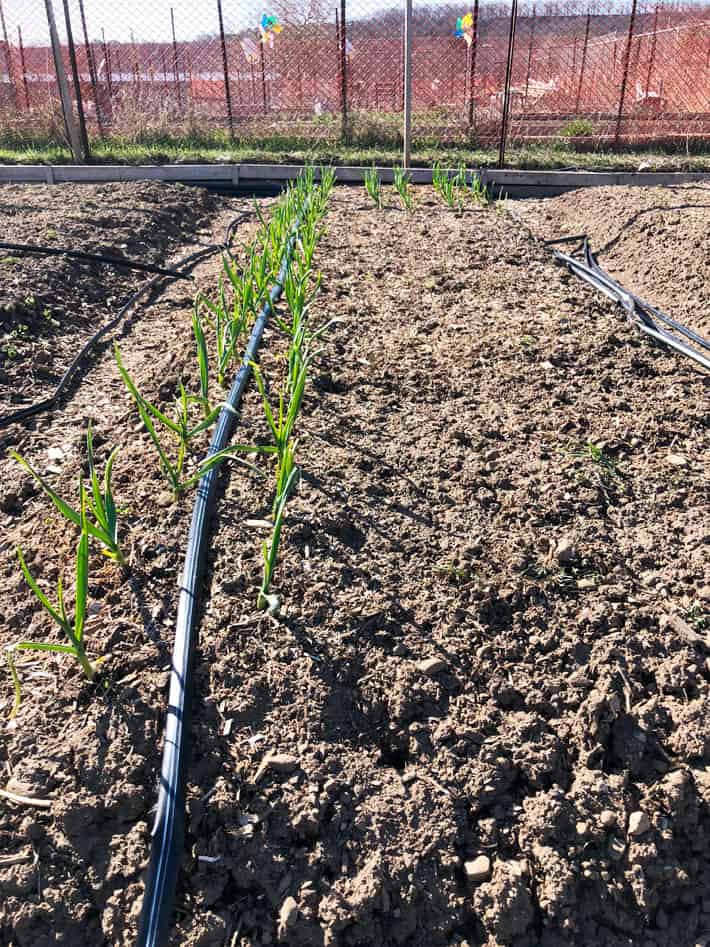 These same symptoms can come from a number of things, but if you live in parts of North America or Europe it's possible you're dealing with Leek Moths. Specifically their larvae.

The Leek Moth burrows into your onion, garlic and leeks leaving a hole in your bulbs as well as your heart.  Months of gardening work GONE with entire crops decimated by the Leek Moth larvae.

Leek Moths started out in Europe where you'd think they'd have the good sense to stay. There's Paris and the French countryside, not to mention raucous, happening London.  It's hard to believe a country like Denmark that produces women who can attract men like moths to a flame would fail at containing their ... moths.  But in 1993 the Leek Moth left Europe and made its way to Canada. 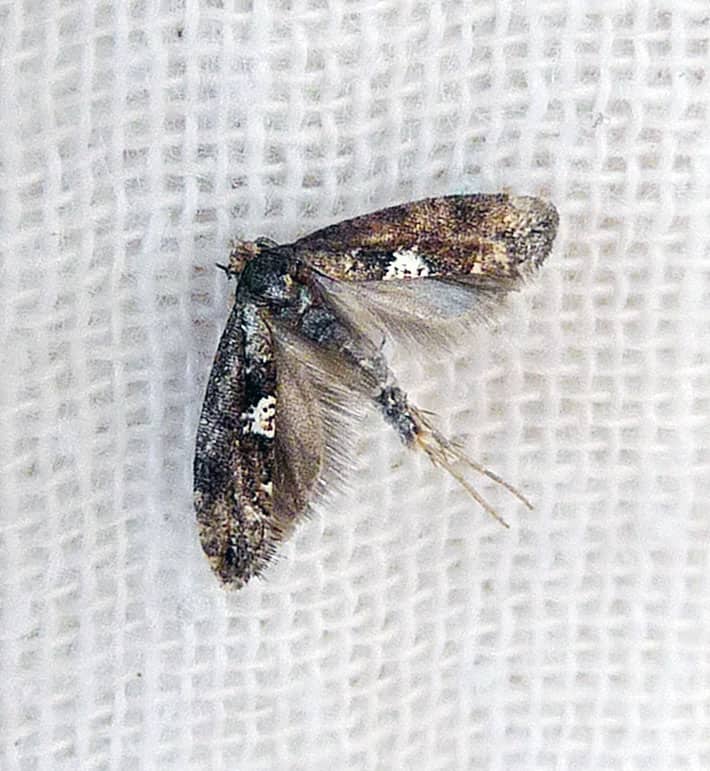 It was first found in Ottawa, the capital of Canada so it's entirely possible the moth came for a site seeing vacation as one does,  and decided it was so nice it would move here.  Canada being the most welcoming country with regard to immigrants, let the Leek Moth stay.

So now what?  The Leek moth is in Ontario, Quebec and P.E.I in Canada and spreading.  In the United States the Leek Moth can officially be found in New York,, Vermont but other unconfirmed areas are possible. 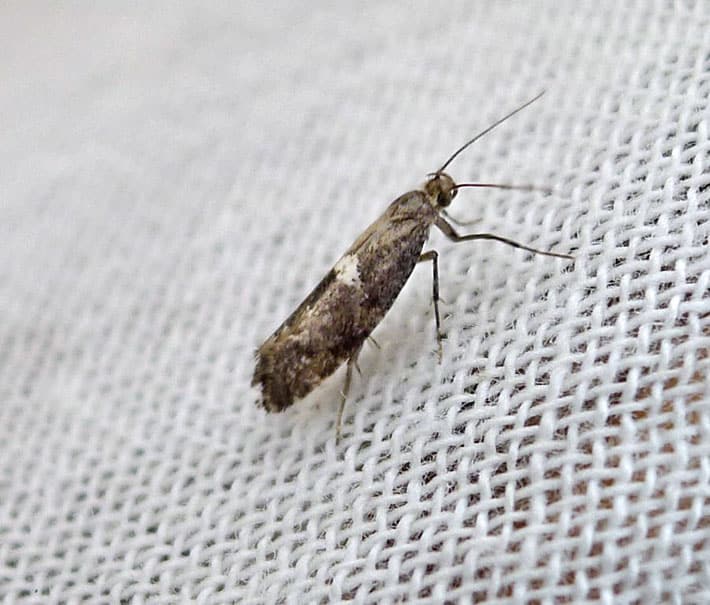 Cover your garlic.  Immediately.  If you're reading this at the end of spring I cannot stress enough how important it is for you to get your leeks, onions and garlic covered right now before the Leek Moth emerges and starts laying eggs all over your plants leaves.

Steps to Protect Against Leek Moth

1. Spray crops with Bt in case there happens to be any eggs laid on your crop already.  If they hatch, the larvae will eat the leaves with Bt on it and die.

2. Cover your crop with floating row cover or insect netting.  Hopefully you can do this BEFORE the leek moths emerge in the spring, if not you have some reassurance having sprayed with Bt. 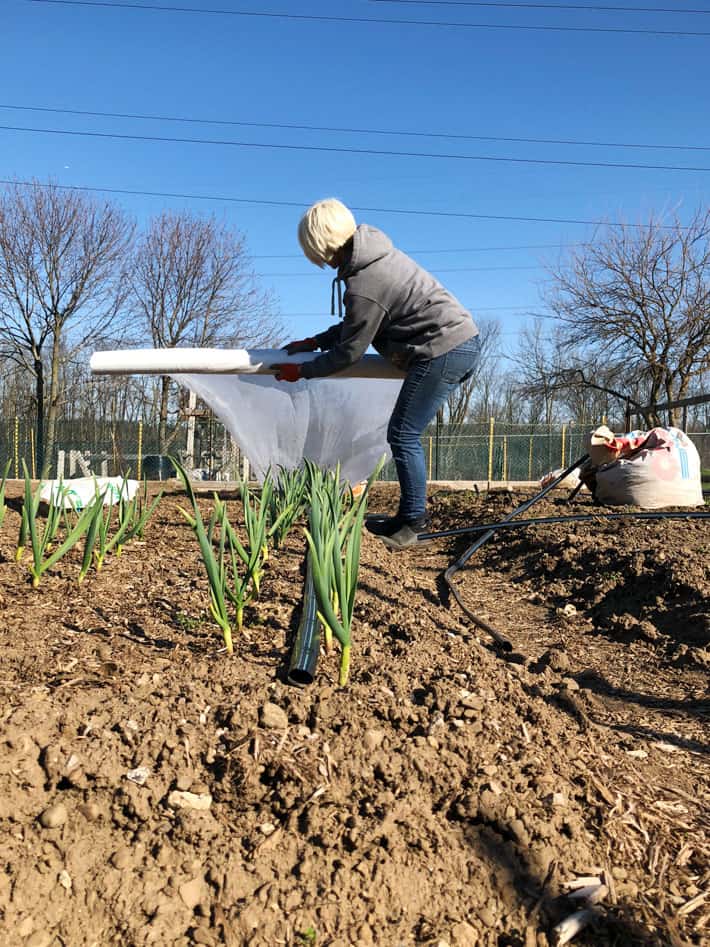 2. After you lay the fabric over your crop,  weigh the edges down with rocks. 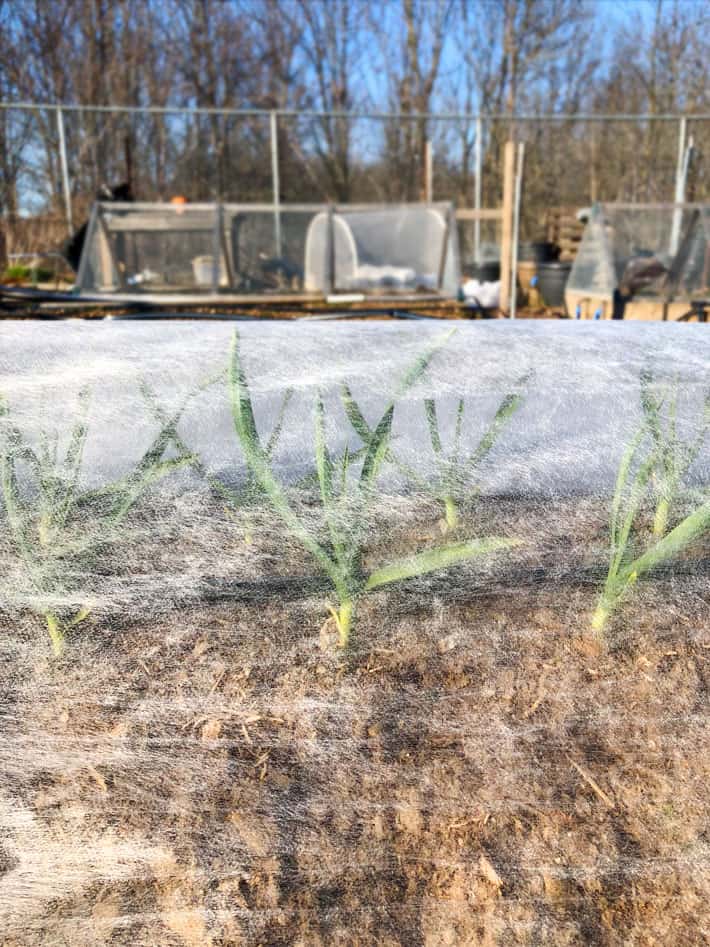 Don't worry. Both sun and rain can get through either covers.  While the plants are small just lay it right on top of them. As they get bigger just loosen the cover and they'll push it up.  You can also use hoops to hold the cover up which is the best option because when the fabric is laid right on the plant, insects can technically still get their little stingers through the fabric and deposit eggs on the plants. 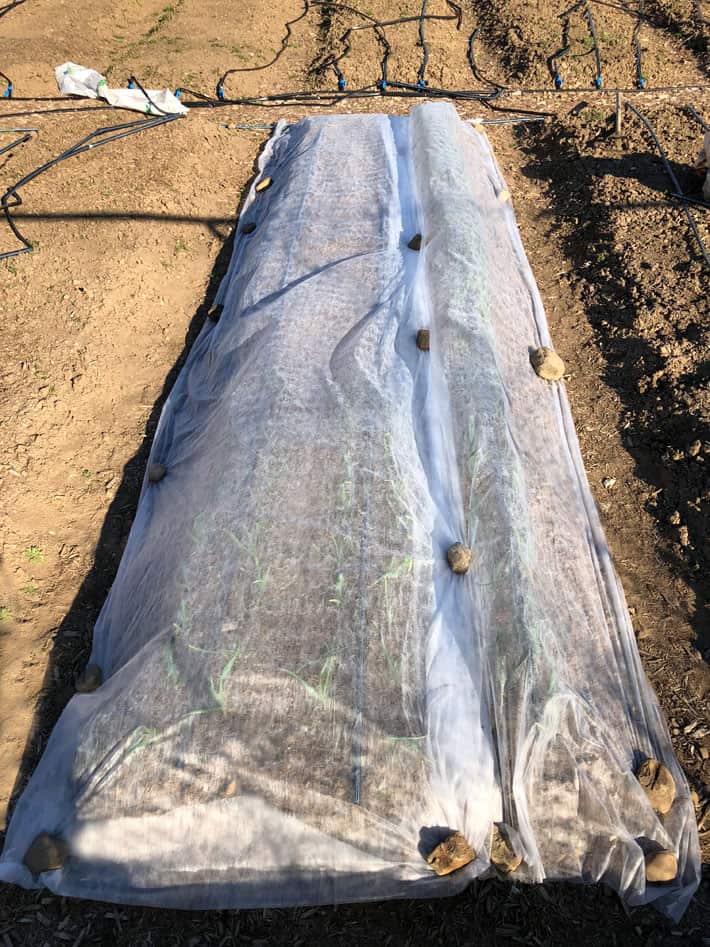 For now I just have the fabric laid down because I wanted to get it done as quickly as possible. Later I'll add some hoops to support the cover. 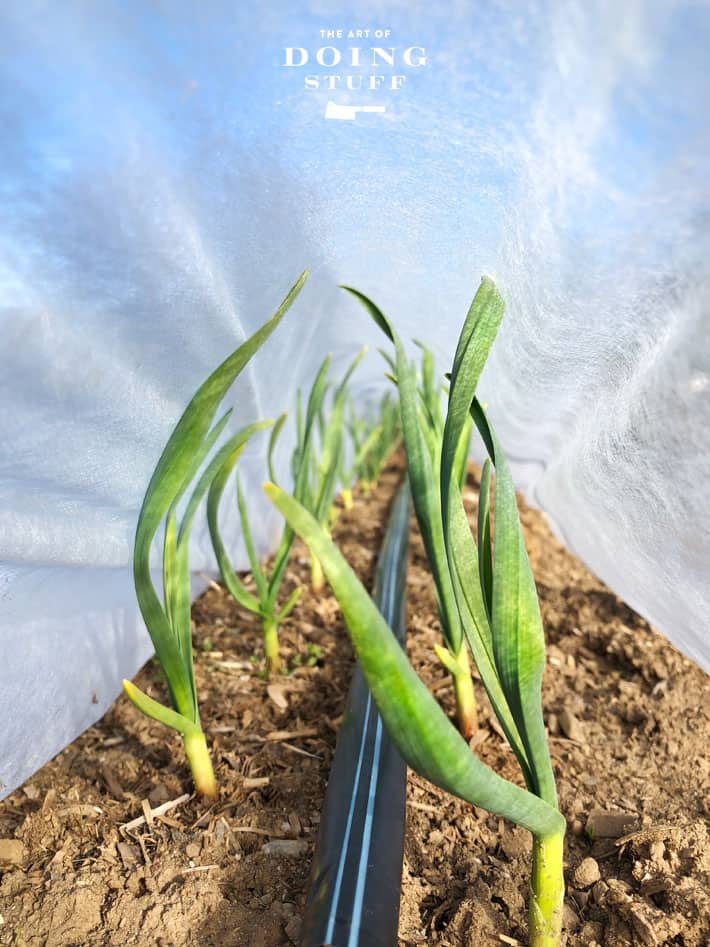 Because you're ALWAYS better off using 2 or 3 pest control options at the same time you also might want to think about getting parasitic wasps.  They're what I use for controlling flies in my chicken coop, only these are a different variety of parasitic wasps.

The wasps for controlling Leek Moths (or Gypsy moths and a variety of other moths) are called Trichogramma.  They're less than 1mm long and come delivered on a sticky trap.  You set them by your crop at the same time that Leek Moths are laying eggs.

Leek Moths have 2-3 laying cycles in my area.  They are generally first seen laying from late April to mid May depending on the weather.  They will cycle again in June/July and July/August.  The best way to know when they're in a cycle is to use Pheromone traps.

These traps will attract Leek Moths so when the traps start to get filled with Leek Moths you know they are in a cycle and it's time to put out a new card filled with Trichogramma.

If you can't find Leek Moth pheromone traps you'll have to watch for them yourself which is close to impossible. But if you're going to do this know that they are nocturnal so you'll have to monitor at night not during the day.  You can also try setting out regular sticky traps without any pheromones and see if you see Leek Moths on them. 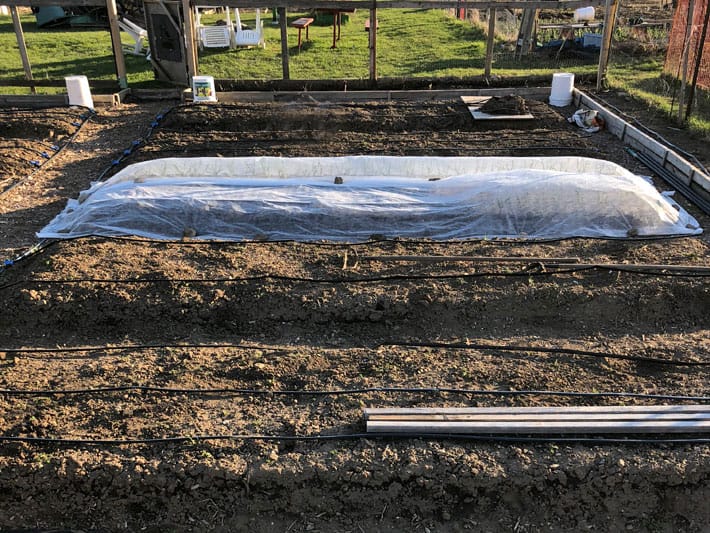 I know. That was a whole lot of information about a bug you might not even have.

All of these measures also help protect against Cabbage Moth/ Cabbage Worms, which is the green wormy caterpillar that mows its way through your kale, cabbage, broccoli, and cauliflower. It also has an alarmingly similar colour to all of those foods which makes it almost invisible.

If you're one of those hippie types who doesn't mind eating the odd caterpillar with your salad or side dish good for you.  I prefer my salads to not ooze guts when I bite into it.

So which are you going to be this year?  The most the most talented superhero, row cover cape wearing gardener that ever lived?  Or the other one. 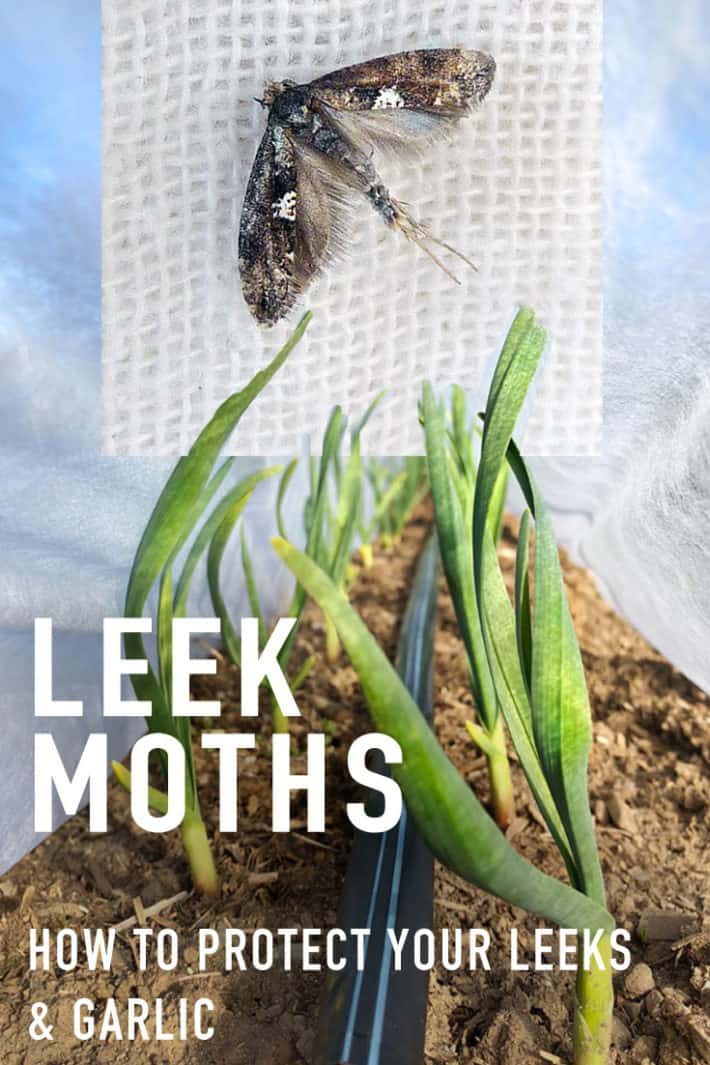