I Bought a Litter Robot. A Robotic Litter Box. Yup.

You know how they used to say you could traumatize a kid by trying to toilet train them too early?  Lead them into a life of crime, gang affiliation, Candy Crush addiction?

I did that with my cat.

Little Cleo came into my life as a tiny kitten after someone else didn’t want her.  She was a bouncy little cat with an affinity for running sideways and jumping straight up in the air, affixing herself to my back with her claws.  Like Velcro.  Super-sharp, angry, needle-like Velcro.

She was equally enthusiastic when I started to train her to use the toilet like a litter box the same way I’d trained my other cat.  Only she didn’t quite fit on the toilet because she was so young, and it was a bit slippery and well … things didn’t go well, but we both kept trying.

Why couldn’t she just join a gang?

Once a cat gets into the habit of peeing where it shouldn’t, it’s really hard to break.  So I dragged out the old litter box and she happily used it.  I figured that was that.

But as the years went on sometimes she wouldn’t use it.  Sometimes she decided that if it hadn’t been cleaned out in half a day she wasn’t going to use it and I could suck it.  So I started having to clean the littler box not once every few days, not once a day, but twice a day.

Seriously though, not like a really bad gang, maybe just a newer, up and coming gang.  One that hasn’t even picked its colours yet.

Then a few months ago I discovered my little Cleo was in renal failure.  At that point she made the decision that if the litter box wasn’t completely washed and filled with new litter ALL the time she was just going to saunter into her personal 11′ x 15′ litter box and whiz all over the floor.  About 20 times a day.

That’s when I started researching automatic litter boxes.  And off brand sedatives.

There were a few litter box options I thought were O.K., but I kept coming back to the Litter Robot.  It wasn’t my first choice because it was  expensive.  Because it’s a robot and robots are expensive.

But I read and compared reviews and I sucked it up and I bought it.  This is a $450 litter box.  For real.

It showed up.  It was huge.  It was expensive.

And it was one of the best investments I’ve ever made in all my life. No joke. A litter robot.

Cleo hasn’t peed outside the Litter*Robot once since I got it. And Ernie, the cat who is afraid of everything … well it took some time for her to get  used to it, but now she loves it too.

For the terrified cat I had to lower the litter robot ball (it comes apart) to the floor level and stabilize it with books around it to get her used to it.  Being lower seemed to help. Once she was used to it, I put it back in it’s stand but didn’t plug it in so it wasn’t ever being loud and spinning around.  Once she was used to it being in the stand, I finally turned it on and let it roll.   The whole process took a couple of weeks.  Seriously.  This is a bonafide fraidy cat. 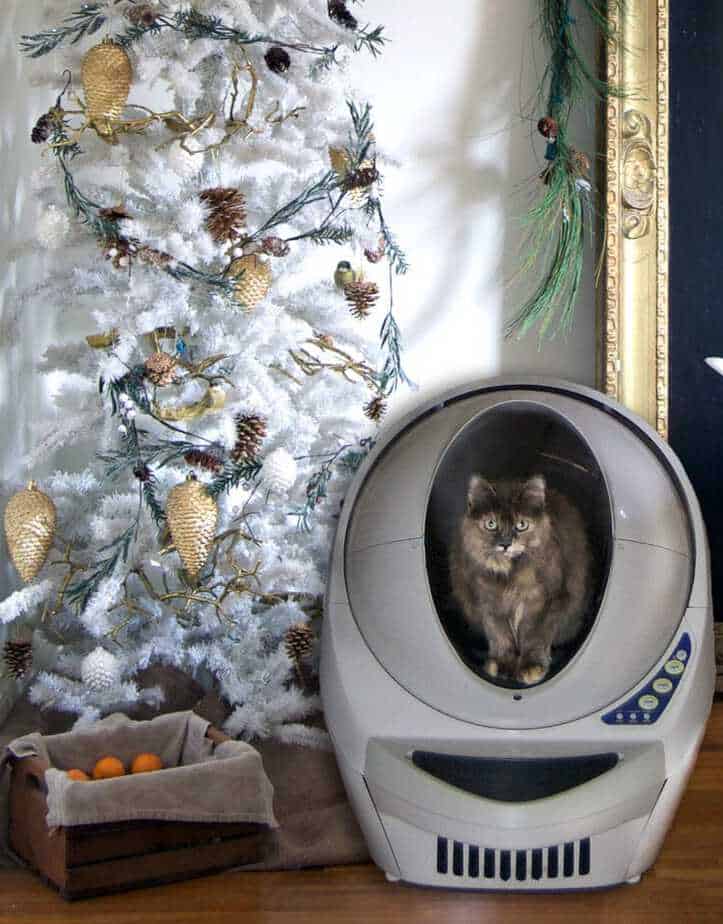 She got used to it.

At first I felt guilty for buying this thing that seems like such an indulgence but now I don’t.  I have no extra time.  None.  Most women don’t.  I work more than full time, I have 2 huge gardens to take care of, I maintain every single thing in my entire home myself, I chop and stack wood, feed, wash and clean up after myself and a flock of chickens every single day.  Alone.

So I’m not going to feel one tiny bit of guilt over buying something that makes my life easier.  That eliminates one of the hundreds of tasks I have to do every day.

And if you’ve gone so far as to research automatic litter boxes … neither should you. 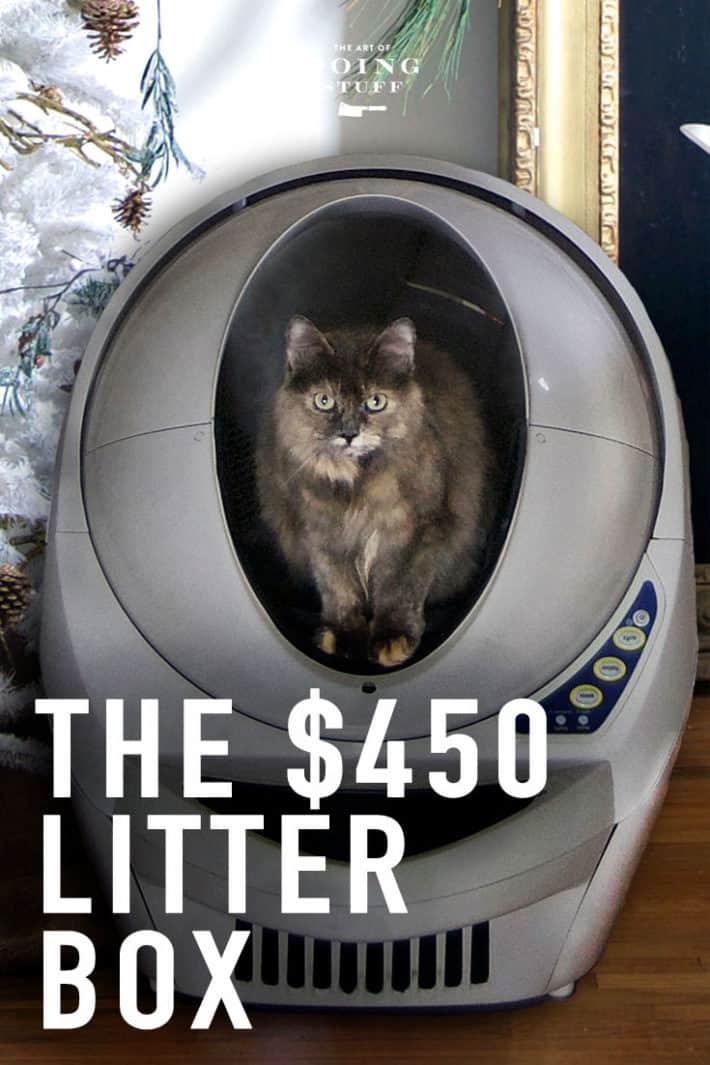