Home » Chickens » Keeping Chickens » My Hen is Limping. How to Fix it a Lame Chicken.

My Hen is Limping. How to Fix it a Lame Chicken.

A couple of weeks ago I came outside to see the most pathetic sight (other than any of the Kardashian shows) these two eyes have ever seen.

There, dragging herself through the chicken run, was Norma.  The gimpy chicken.  While all the other chickens ran at break beak speed to come and see me, Norma hobble-limped halfway towards me, gave up and then laid down.  At which point all of the other chickens sensed a weak member in their flock and attacked her.  Just like that they turned on one of their own.  Again, not unlike the Kardashians.

I immediately went into medic mode, strapped a flashing red light to my head, screamed out some surprisingly loud siren sounds and made my way to Norma.

The first thing to do in assessing a chicken injury is to LOOK.

So I gently picked Norma up and gave her a thorough once over.  I looked for broken bones sticking out, wounds and thorns.  She looked fine.  But it’s hard to see through all of those feathers.  The next thing I did was flip her over and take a look at the bottom of her feet.  I was checking for Bumblefoot (a potentially deadly infection on the underside of a chicken’s foot).  No Bumblefoot.

The second thing to do is feel for warmth.

Like with other animals an easy way to check for pain or infection is the gently feel around the body parts.  An injured area will often feel warmer than the rest of the body.  No such luck with Norma.

The third thing to do is start guessing and eliminating.

The one thing it could possibly be was a case of Norma being egg bound.  I wasn’t convinced this was the case because it really looked like a sore foot or leg, but I wanted to be able to rule out the possibility of her being egg bound (also life threatening).

So I did what you’re supposed to do to make her feel better.  I put her in a bath and got ready to stick my finger up her bum.  No idea if this applies to the Kardashians as well.  I suspect it does. 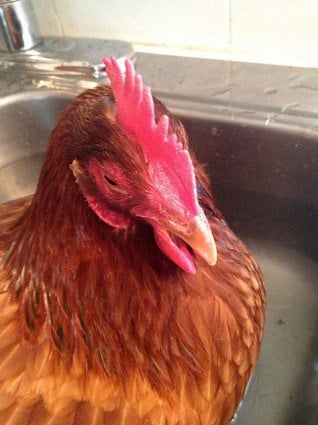 I sat her in the kitchen sink filled with warm water and went about my business in the kitchen.  She didn’t seem to have any desire to move.  She just sat there quietly, waiting for me to get her out. 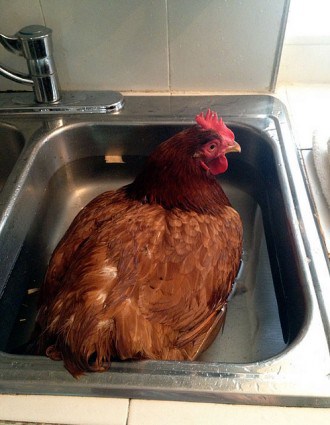 The kitchen was a bit cool and Norma was wet, so I wrapped her in a towel which made her warm, dried her off a bit and had the added bonus of making her look like a superhero. 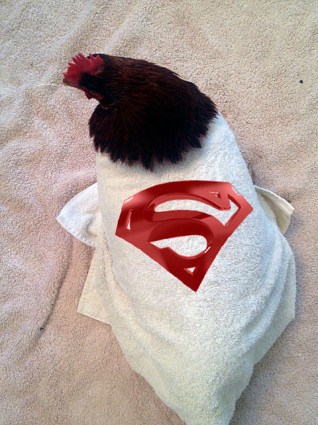 Aftercare involves keeping the patient quiet and allowing them to rest. 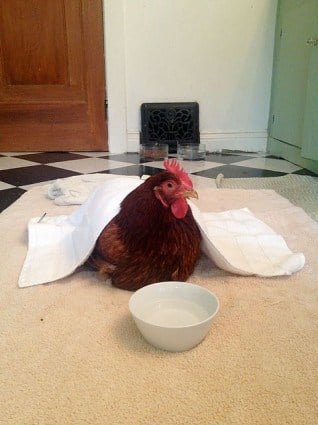 Once the patient is able to eat and poop, they can be discharged. 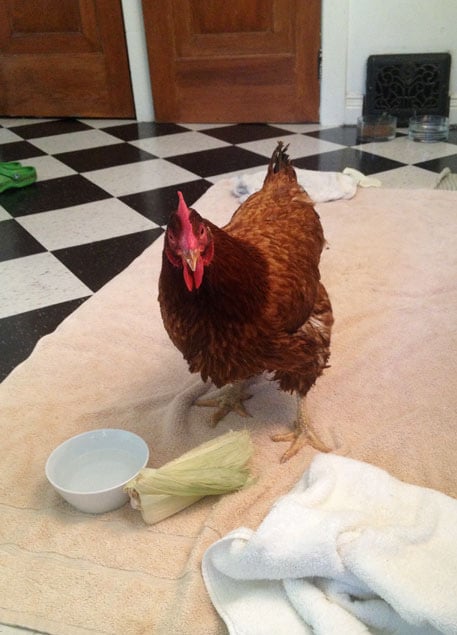 I took her outside and gently put my finger in her bum. I was carefully checking to feel if there was an egg stuck in there.  I didn’t take pictures of that.  I tried.  But it’s kindda awkward to hold a camera, a chicken and a suppository.  Just kidding about the suppository.  It was my actual finger that went up her bum.  This is why as a chicken owner you should a) be brave and b) own an entire box of surgical gloves.

If you’re desperate to see a chicken bum, which is also called the vent, you can see one here.

Norma was relaxed, there didn’t seem to be an egg stuck in her and I was back to square one.  There were two possibilities.  She could have had a stroke.  Or … she could have just jumped off the roost a bit wonky and twisted something.

If a chicken has an injury that’s causing them pain the easiest and most effective thing you can give them is 1/2 a baby aspirin.

So that’s what Norma got.  One half of a baby aspirin.  If the limp went away that would let me know it was just a twisted ankle or pulled muscle.  If it didn’t help it could mean it was a stroke.

This is all random guessing of course, but that’s what you do in these sorts of situations.  Hell.  It’s what your doctor who went to a real medical school and everything does.

I held out the aspirin in the palm of my hand and she gobbled it up right away.  I kept her away from the other chickens so she wouldn’t be tormented and came back an hour later to check on her.

This is how she looked.

No limp. Or very little limp. So I knew that the injury was probably a muscle or inflammation issue, not a stroke. It isn’t always great to mask the pain on an animal because as far as they’re concerned as soon as the pain goes away, it’s hokey pokey time. A free for all of running, jumping and playing hopscotch. They don’t know the pill is masking the pain and they still have an injury they need to be gentle with. The simple truth is they just aren’t smart enough (insert your own Kardashian joke here).

So with animals you have to use a bit common sense. If I left Norma with her limp she’d be more careful with her injury … but only for the next 16 hours or so, until the other chickens devoured her alive.

Chickens can spot weakness faster than a schoolyard bully looking for lunch money. And they can take down your average 9 year old quicker.

So that’s why I opted to give Norma half an aspirin until her leg healed. The injury lasted for about 5 days so I prescribed 1/2 a baby aspirin every morning.

And now you’re going to think I’m weird. A loon. A bit of a softie. Since I helped Norma I’ve noticed she’s become much friendlier with me. She’s no Cuddles, but she lets me pick her up and look her over without a single squawk. Once she even asked me how my day was.

I told her it was O.K. I mean, I couldn’t keep up with the Kardashians. But who can?