An easy potato leek soup recipe you can serve two ways; rustic, full of squares of diced potatoes or blended until it's smooth and creamy.

I've been making one version or another of potato soup for my entire adult life (unless you count being 18 years old an adult, which you shouldn't because 18 year olds think Glee is a really good television show.) That fact right there demonstrates better than anything how underdeveloped an 18 year old brain is.

I started out around 20 years ago making potato soup with some sort of recipe but that morphed into what I do today.

I normally make potato leek soup without a recipe.

There's something very liberating about not using recipes.  About having the confidence to just grab your ingredients and start cooking. All of us have those recipes.  The ones we just know by heart or can just eyeball and taste test until they're perfect.

This potato soup can become one of those recipes for you, but I've also included ingredients and measurements for those of you who are just starting to learn to cook or who always like to have exact recipes.

It's made up of three main ingredients:

Say that over and over a few times and then we'll continue. O.K.  Now that you know your basic ingredients ... we're ready to begin.

The first thing you're going to do is prep your leeks and wash, peel and dice your potatoes.

What kind of potatoes are best for soup?

For soup you want to use floury potatoes.  A potato that's dry and fluffy like baking potatoes. Russet potatoes and Kennebecs are good choices.

You can also get away with a Yukon Gold which is an "in between" potato.  Not too dry and not too waxy.

A bundle of leeks and some garlic get cooked and reduced. What first looks like a massive amount of leeks will reduce themselves to a less shocking amount.

Before sautéing, leeks need to be prepped. There are a couple of ways to prep leeks. I use the first method in the video because frankly - I don't feel like the second method works very well but I threw it in there for an option.

Throw in your diced potatoes and chicken (or vegetable) broth and you've got the start of a basic potato soup.

Once the leeks are soft, that's when you add your drained cut up potatoes ( the smaller you cut them the better because they cook faster and have less of a chance to get gluey) and enough broth to cover the potatoes.

Cook until the potatoes are soft.  Don't overcook them.  Overcooking can make potatoes (even floury ones) gluey.

This is where things start to get controversial.

If you like a pureed soup the one and only way to get a perfectly smooth, blended, velvety potato soup is to press the potatoes through a food mill and then as though you were a French chef trying to get his 3rd Michelin star.

Pureeing potatoes any other way than with a food mill and/or chinois, you risk creating gluey potatoes. (a chinois is a cone shaped sieve you can press things like soups and sauces through to make them perfectly smooth)

That means if you are going to serve this soup in your French restaurant as you wait for your 3rd Michelin star you cannot use a potato masher, stick blender or regular blender to puree your soup.

If you want your soup to be rustic then halfheartedly use a potato masher to squish about half of the pot of soup. This will turn the clear broth into a thick potatoey broth. And you'll still have whole pieces of potato and leeks.

Throw everything into a blender and starting at the lowest speed, blend. Increase the speed if things aren't as smooth as you would like and blend for only a few more seconds.

If you blast the potatoes in the blender on high you'll end up with glue soup. So go low and slow.

Once the soup is blended, you can add the saffron including the liquid you steeped it in and stir. 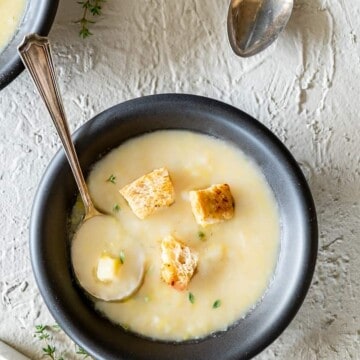 If your soup is too thick for your liking after blending, just stir in some more chicken broth, or milk until it's the consistency you prefer. As you can see even though it's very hearty and filling, this is an incredibly low calorie soup so feel free to load up on garlic croutons, cheddar cheese, bacon or any other delicious toppings you'd like.

To graduate to making this without a recipe, just know that you use equal weights of potatoes and leeks. So, 1.5 lbs of leeks and 1.5 lbs of potatoes. Then you need as much broth as it takes to just cover the ingredients and that's it.

Notice that this soup is only about 100 calories a bowl. So feel FREE to load it up with toppings like garlic croutons, sour cream, bacon or cheddar cheese.

Whatever it takes to make you gleeful. 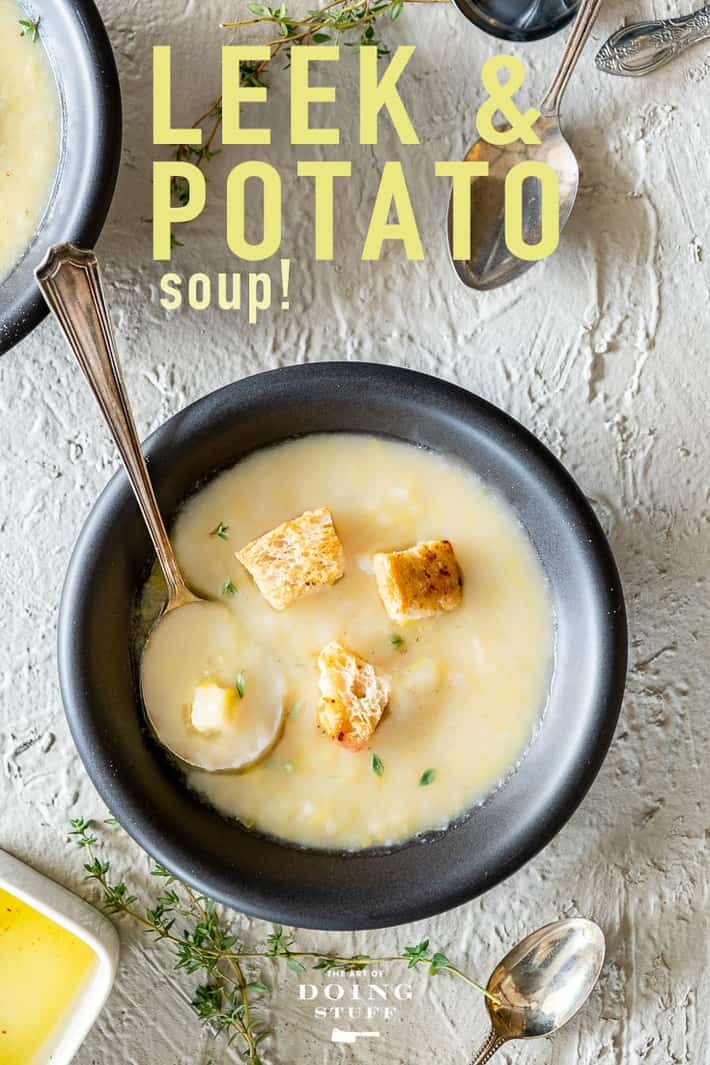