Yup, we're all unique flowers who are special and individual in every way.  Except when it comes to our dreams.  However different we might seem as humans, how similar we really are all shows up in our dreams. The top 10 dreams everyone has and what they mean. 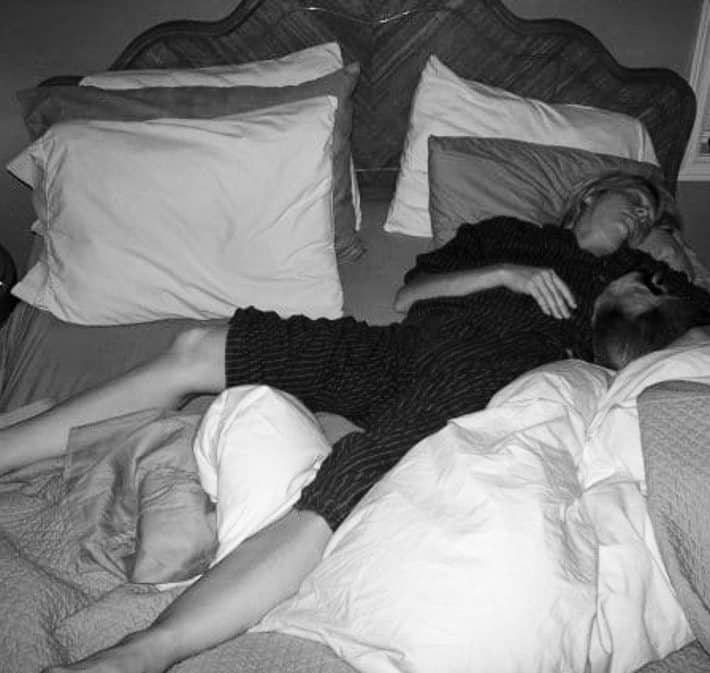 In the great tradition of people who bore other people by recounting  their dreams, I … am going to recount my dreams to you. Don't worry. You're gonna get the chance to bore everyone else, including me, later.

Since I was young I've had nightmares. Lots of them. Death, destruction, chasing, kidnapping, murderous heart pounding dreams. You name the nightmare and I've had it. Oftentimes over and over again.

In the past few years I've switched over to general anxiety dreams that are still very disturbing but not quite as death filled. I've never thought much about these nightmares of mine. They're just who I am and believe it or not, and this will sound really insane, but … I find them kind of comforting now.

I'm sure it's some sort of subconscious appreciation of how my dreams are dealing with the real life problems I have. Not that I feel like I have any at the moment, but my dreams know better - they know we're all dealing with something.

That's generally what dreams do. They deal with all the stuff you aren't dealing with in your waking life because you're too busy paying bills and wondering where you hid the vodka.

According to the Encyclopedia of Mental Disorders only a small percentage of people have nightmares on a regular basis. Nightmares aren't just scary dreams, they're terrifying.  They can wake you up and the fear will stay with you.

About half of all people who suffer with nightmares also suffer from psychiatric disorders. I don't think I have a psychiatric disorder, at least not one fierce enough to cause nightmares every night so I'm more inclined to go with the Encyclopedia of Mental Disorder's other rationale for people with nightly nightmares which is the fact that artistic or creative people are at a greater risk of nightmares. Mainly because they have better imaginations.

5 or so years ago, around the time my fella of 11 years ran away from home,  I was having nightmares that revolved around cloudy, scary, turbulent water.  And I was in the scary water. I wasn't afraid of drowning, that wasn't the feeling - it was just dark and ominous.   The dreams were me finding my way.

1 year ago, just after I had the relief of finding out that I *didn't* have breast cancer (I really encourage you to read that post here), I started having anxiety dreams.

It's amazing that there are so many of us with such different brains and personalities - yet we all have the same themes in dreams.  Don't believe me?  Here's a look at 10 of the most common dreams.  I'm guessing you've experienced at least half of them.

If you're looking for a little more information on dream interpretation get The Dream Dictionary for Dummies.

Having a person chasing you in a dream can mean you feel threatened by something in your life or you're avoiding something. You are running from something in your conscious life; emotions, a relationship, worries or even your taxes.

It's a classic anxiety dream.

If you're being chased by someone who is trying to to kill you, you can take that as a pretty direct translation. That something or someone that has to do with you is bad for you. It doesn't necessarily mean it will literally kill you, but could kill parts of you. Your creativity, your happiness or your sanity for instance.

It could be a direction you yourself are going in that isn't healthy like hard drug use or other bad habits like eating a pound of butter for breakfast every day.

NOW, if you're the one doing the chasing it can mean a couple of things. You're possibly trying to run off that morning pound of butter orrrr you're running towards something (an ambition, person or goal).

If the water is calm and clear, you're at peace obviously.  If the waters are murky or turbulent you're struggling with equally turbulent emotions.

THIS is the dream I had a lot after my breakup. Murky, turbulent, violent water. I had no idea it was such a common dream because I don't remember ever dreaming about it before.

It's surprising how your teeth falling out in a dream can be every bit as horrifying as it would be in real life. You're in your dream, walking down the middle of a highway with your new florist Jeff Goldblum, as one does in dreams, and you feel something in your moth. A tooth. Then another and another and soon you have no teeth.

BUT as with a lot of dreams, something that seems negative in a dream isn't necessarily bad. There CAN be a positive interpretation.

When you lose your baby teeth in real life it's a step towards growing up. The meaning of the dream about your teeth falling out could be that you're maturing and growing as a person.

On the other hand, it can have a negative connotation too. (Weirdly, dream science isn't very sciency. Actually, that's not weird at all)

The negative analysis of dreaming that your teeth fell out of your head is that you're afraid that you're losing control over something.  It's a symbol of powerlessness and insecurity.

You live in Canada where pot is legal and you're super high.  No wait, that's not right.  Flying dreams represent experiencing a newfound sense of freedom or control.  The next time you dream about flying make a point of thinking about whether you are experiencing either of these things in your life. You know. Just for dream analysis fun.

The most reasonable explanation for dreaming about flying is that you got a new cape, so ... 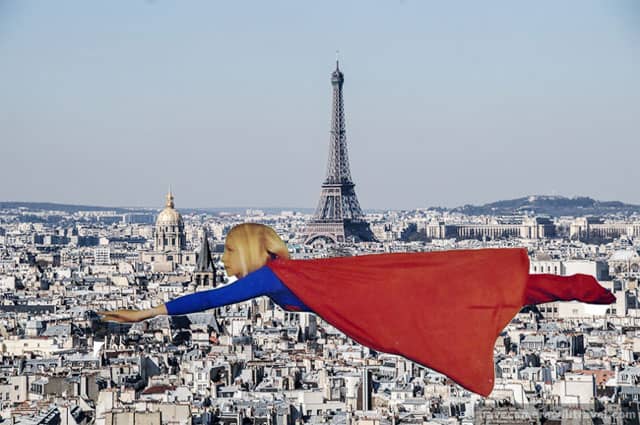 Dreaming about missing exams or suddenly realizing you haven't studied for a test make sense for someone in high school or University. But these dreams continue into adulthood.

The ubiquitous "I have an exam or test and I never went to class and never studied" dream can happen through your whole life.  The test could be in another language or you can't get into the exam room … whatever the case it's a test and you're anxious about it. This is a classic anxiety dream and usually means  you feel like you're being judged or evaluated by someone in your life.

You're feeling exposed or ashamed of something if you dream you're naked in public.  It can also mean you're feeling vulnerable.  Or you're just a hippie.

Dreaming of your own death signifies starting over.  So it's not a bad thing, it's the chance to start over. New job, new relationship, or a new you after coming out of a relationship.

It can also mean that you're finally a grown up - the dream is like a rebirth. Dreaming of a parent dying can mean you're personally at the point where you can live your own life. Your own mature life where you can survive and take care of yourself without any parenting. For women this kind of dream is typical around the age of 10. For men, it's around 73. Just kidding.

Dreaming of a sibling's death generally means you miss them.

If the death of the person in your dream doesn't make you sad do you feel like that person betrayed you in real life? Having them die in your dream is your retribution.  It doesn't mean you actually want them dead, your dream is just giving you a chance to punish them so you can get over it.

Cheating dreams are another common anxiety dream.  If you dream your husband/wife is cheating it can mean you're actually worried about them cheating.  It can also mean you have trust issues with them or are feeling insecure for some reason.

Gay Sex (when you're not gay) means you're secretly gay.  No it doesn't.

Dreams where you're falling are also classic anxiety dreams. They usually mean a situation in your life is spiralling out of control. It could be your job or  a relationship.

If you're falling but aren't afraid, it means you're in control of your situation and will easily get through it.

So what does it mean if you dream about poop? That your life stinks? That you feel like crap? No.  Shockingly, dreaming about poop is kind of a good (albeit disturbing and gross) thing. It means you're letting go of negativity and positive changes are ahead. But maybe buy some Immodium, just in case.

Alligators.  Dreaming about alligators means you're feeling vulnerable about something. It can also mean that you're worried about a decision you're having to make in real life.

Keep in mind dreams can be interpreted in a few different ways.  Also keep in mind some people think dream interpretation is a bunch of hoodoo. By nature, I'm a skeptic who always wants to be proven wrong. So my inclination is to scream HOOEY about all of this.

But if that was the case, if dreams and dream interpretation was hooey, then chances are we wouldn't all be having the same dreams as each other.   A dream may mean one thing for you and another thing for someone else but as long as you know what you're going through in your real life you should be able to figure out what your dream means to you.

If you don't know what you're going through in your own life you're very, very dead so it doesn't matter.

If you want to delve a bit further into your dreams (and who doesn't) I can recommend 2 books to keep on your bedside table.

The Dreamer's Dictionary which as published in 1986  with the majority of hundreds of readers on Amazon giving it a 5 star review and  The Dream Dictionary for Dummies which includes not only dream interpretations but also techniques for dreaming more and remembering the dreams you do have.

If you want to keep track of your dreams, you need to keep a journal beside your bed to write them down immediately when you wake up. You think you'll remember them, and you might for a few hours, but then they're gone. 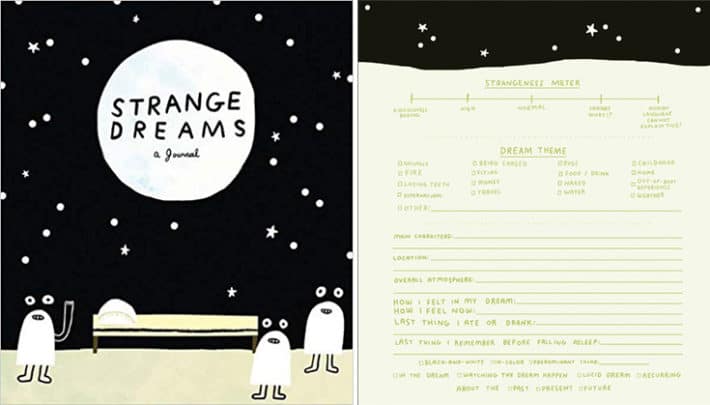 THIS is the most fun dream journal I've ever seen. I mean, it has a strangeness meter at the top of every page.

It's now time for you to bore everyone with your dreams! 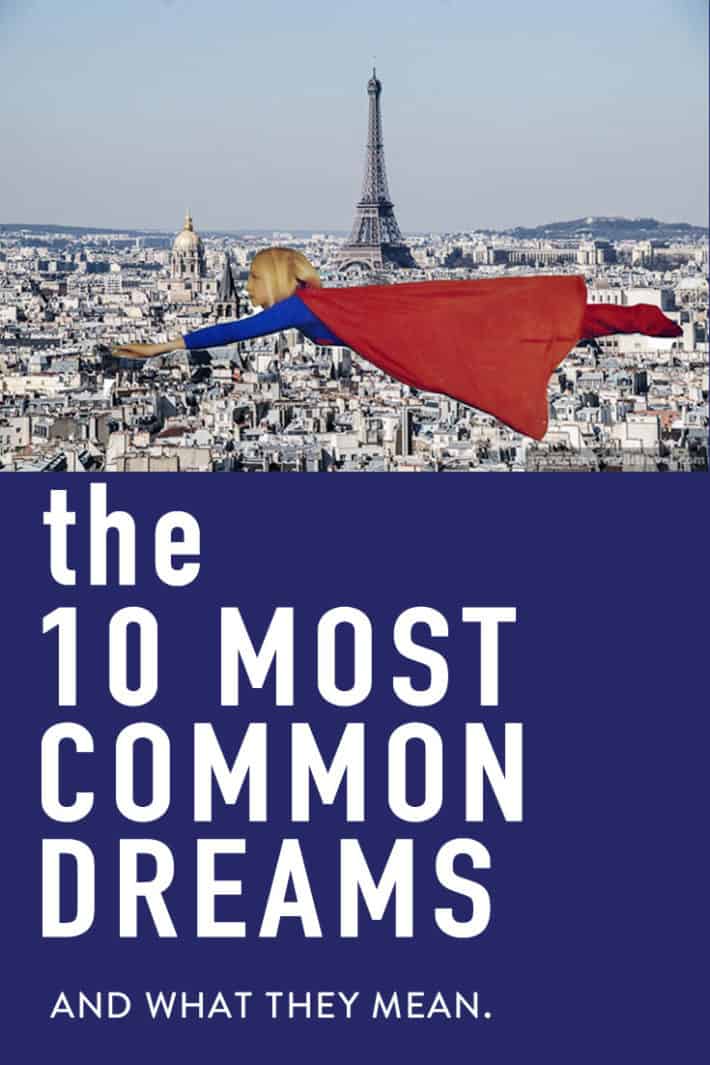