Welcome to the second corner of my kitchen.  The pantry.

Before we get to that I'd like to tell you a little story about  a young girl.  A girl who grew up in Nutley, New Jersey.  The daughter of Polish parents, this ambitious girl became a model, a housewife, an author, a television host and then head of an empire.  All based on her impeccable taste and ability to take every day tasks and elevate them to art.

Then she went to jail.

As you have probably guessed by now, that little girl was me.

In 1979  I shined as "girl modelling slacks" in the  Robinson's department store flyer.  That alone should be proof enough that I'm telling the truth.   The jail thing is a bit hard to explain but suffice it to say you don't wanna get between me and the last full fat buffalo milk Greek Yogourt on sale.

So let's talk about that Martha Stewart now.  She may not know anything about how to utilize a Chinese throwing star in a yogourt emergency,  but she has a pretty adequate handle on good design.

When I first started thinking of redoing my kitchen I immediately thought of Ikea cabinets because EVERYONE uses Ikea cabinets.  They're inexpensive, well made and easy to install.  I knew I wanted Shaker cabinets.  But when I looked at the Ikea ones in person they weren't exactly what I wanted.

And if I was going to pay absolutely nothing for my kitchen cabinets, I was not going to compromise!   And that's exactly what I spent on these cabinets by the way.  Nothing.

I knew going into this kitchen renovation that I was going to work as many deals as humanly possible to get my dream kitchen.   I could guarantee the cabinets would be featured in a 5 page spread in Canadian Living Magazine as well as be seen on my blog from now until I get a new kitchen.  Which I  imagine will be around the time evolution actually eliminates the human baby toe.

My kitchen designer Carol Reed suggested the Martha Stewart line of cabinets at Home Depot for two reasons.  Because they're really good cabinets and because the Home Depot is very blogger friendly and open to this sort of exchange.  Carol was right on both counts. In case you don't remember Carol and I've never met. She designed my kitchen over the Internet.

I went with the Martha Stewart Ox Hill cabinets in the colour "Picket Fence".   In layman's terms those are shaker cabinets in white.  I knew I wanted a big pantry and after some configurations and reconfigurations Carol and I decided the best place for it was on the left side of the kitchen where it would be seen from the dining room.

Take a look at the pantry corner and I'll explain some of the details as we get through the post. 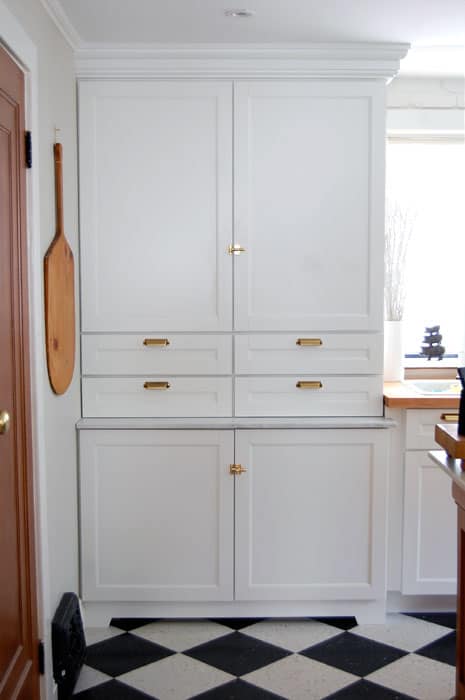 The thing about this pantry is Martha Stewart doesn't make one like it.  She does however make cabinets and drawers so we Frankensteined together a mixture of base, upper cabinets and drawers to create a stunning pantry.   And I don't use the word stunning loosely.  Mainly I reserve it for tomato seedlings and Lladro figurines. 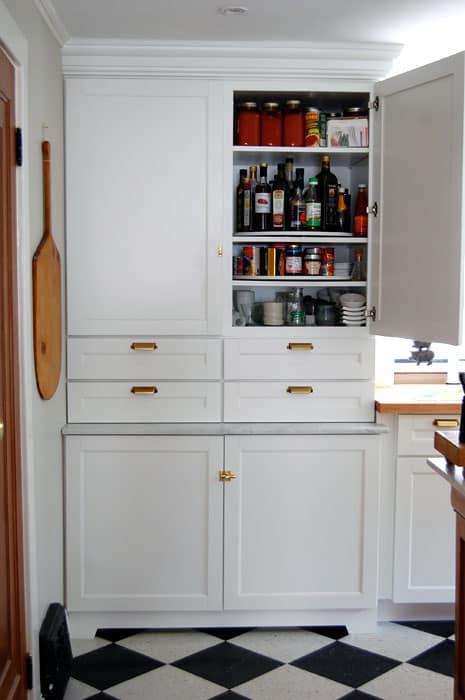 Then I had the upper portion of the pantry (the drawers and the upper cabinets) stepped back from the front of the base cabinets they sit on by 5 inches. The whole effect is a sort of breakfront that turns what could have looked like cabinets stacked on top of cabinets, into a pantry. 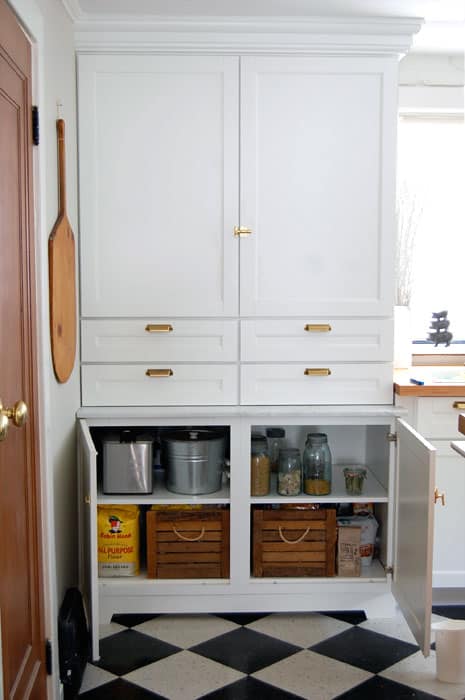 I keep two wood crates in the bottom. The one on the left is filled with baking stuff like flour, sugar, baking soda, chocolate chips, vodka. The crate on the right is filled with dry pasta type things. Penne, rice, asian noodles, sake.

The drawers.  The drawers on the other  hand hold far more important things. 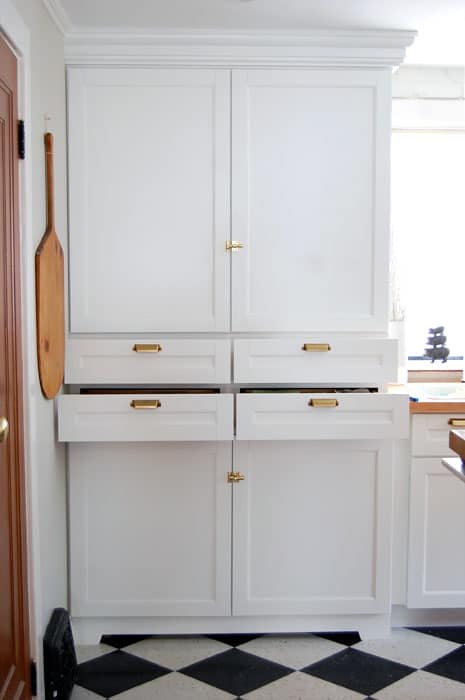 Behold the spice drawer of my dreams. And if you don't dream about spice drawers you are not livin' large ladies. Not. Living. Large. 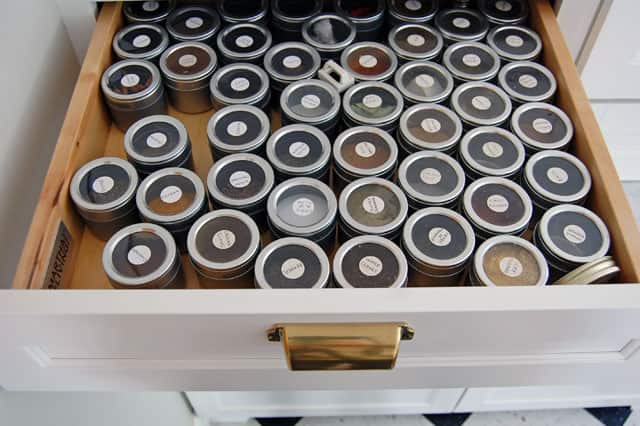 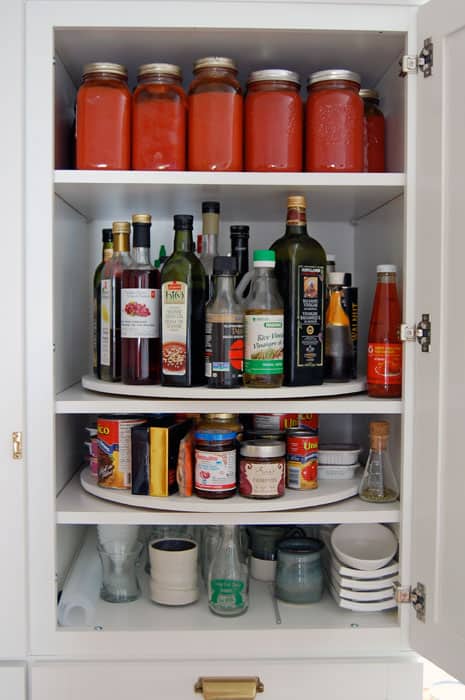 Because of the depth of the upper cabinets (22") and the lack of height from my ankles to my neck I had to figure out a way to make all of the items accessible without having to permanently attach a folding stool to my shins.

Enter the laziest of all the ladies. Susan. The lazy susan seems like it should be an easy thing to find in any number of stores. Do not be fooled. Miss. Lazy Susan is as rare as hair on a turtle.

I searched and searched for a lazy susan and couldn't find anything. I found a few flimsy plastic ones but that was about it. Ikea did have some at one point but they were a specialty item that they carried once and they were gone.

Even if I had found lazy susans in a store chances are I never would have found one large enough. I wanted it to be big enough to fill my entire cabinet so I wasn't wasting any space.

So I made my own lazy susans. 4 of them. I'll be showing you how to do that in an upcoming post. I know. Super-exciting, right? Live. Ing. Large. 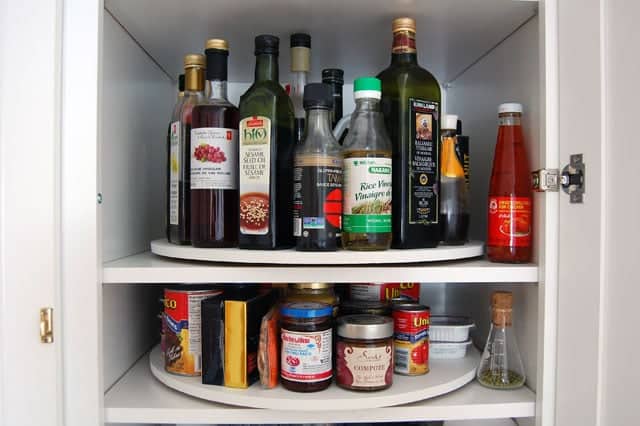 On the inside of one pantry door, I put up stick on chalkboard paper (which I got at Dollarama years ago) to act as my chalkboard. I've had a chalkboard in my kitchen for 15 years now and I wasn't about to give it up just because I had no cabinets. 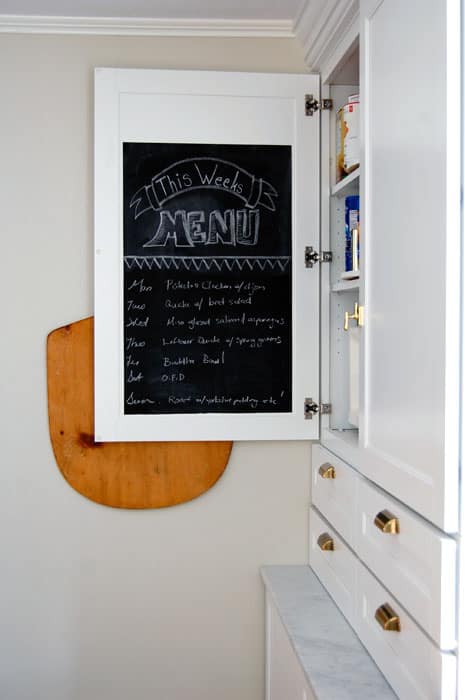 The final thing I did to customize the cabinets into a really great pantry was have a piece of marble cut for the upper portion to rest on.  This piece cost around $200 to have cut to size and the edges slightly rounded. 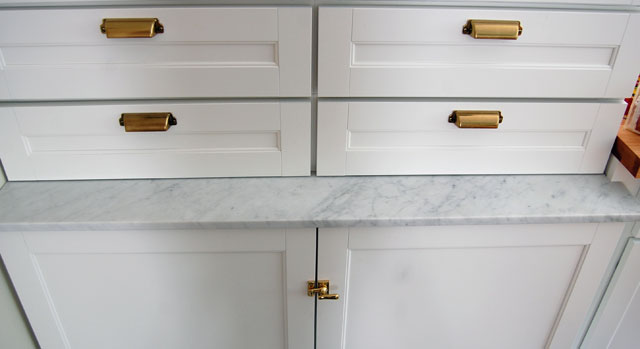 It's Pink Tool belt's favourite part of the kitchen. Along with looking great, it gives me somewhere to put my jars, cans, or glasses when I'm going through the cupboard. 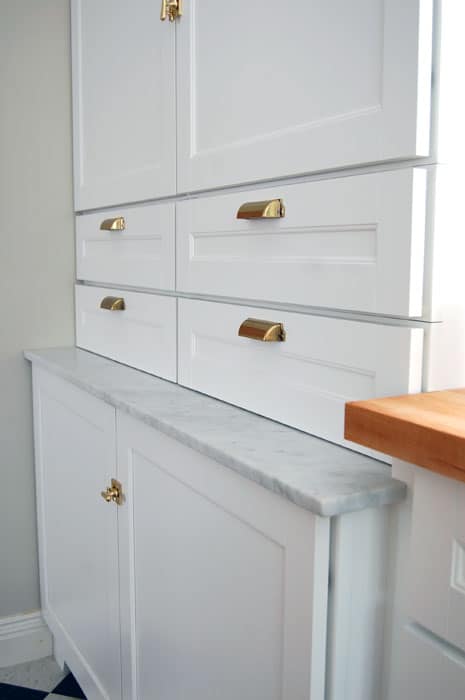 The marble is honed Carrera ... 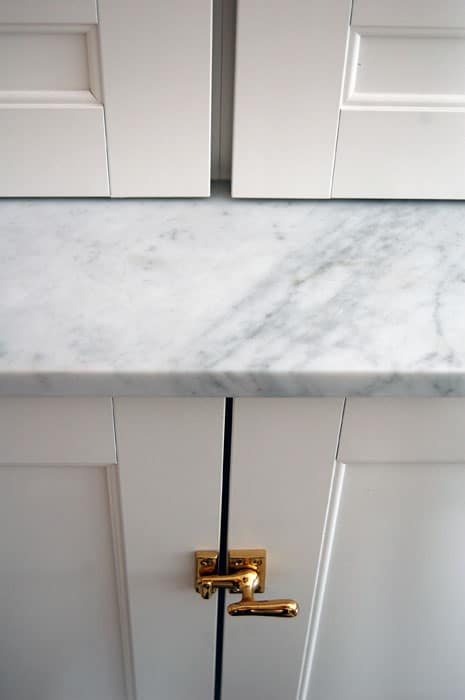 ... which matches the honed Carrera marble on my island which you've caught tiny glimpses of but haven't seen in its entirety. 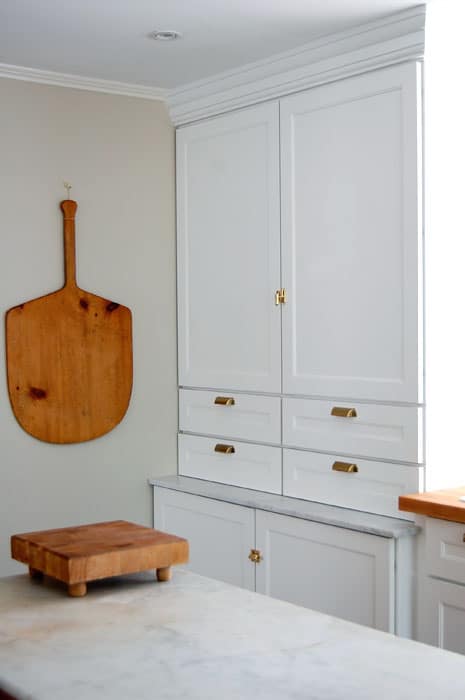 And which you're not going to see now. I told you. One corner at a time.

Now if you'll excuse me, my ankle monitor is makin' me rashy and there's a sale on Greek yogourt.