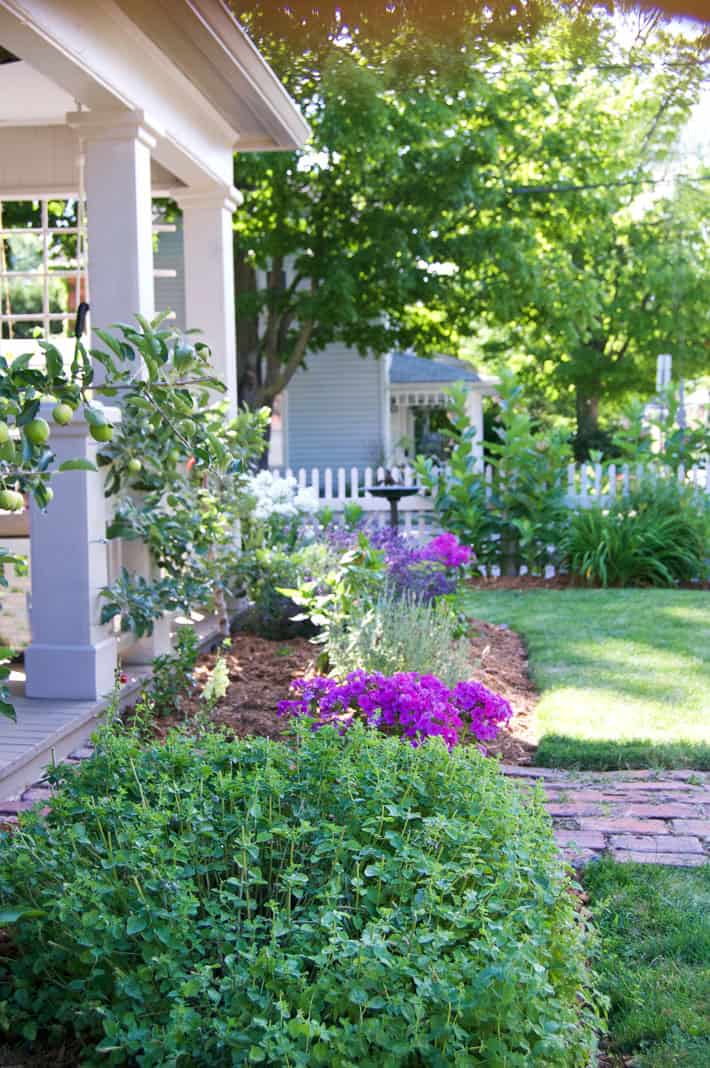 After years of growing only vegetables in my front yard, this spring I decided to rethink the yard.  With 1,600 square feet of vegetables in my community garden and my habit of only eating 17 or 18 meals a day – I knew I didn’t need any more vegetables.

This freed up my entire front yard and created a burst of excitement the likes of which I haven’t had since discovering pillow case sized bags of potato chips at Costco.

Then came the anxiety.  The likes of which I haven’t had since discovering pillow case sized bags of potato chips at Costco. 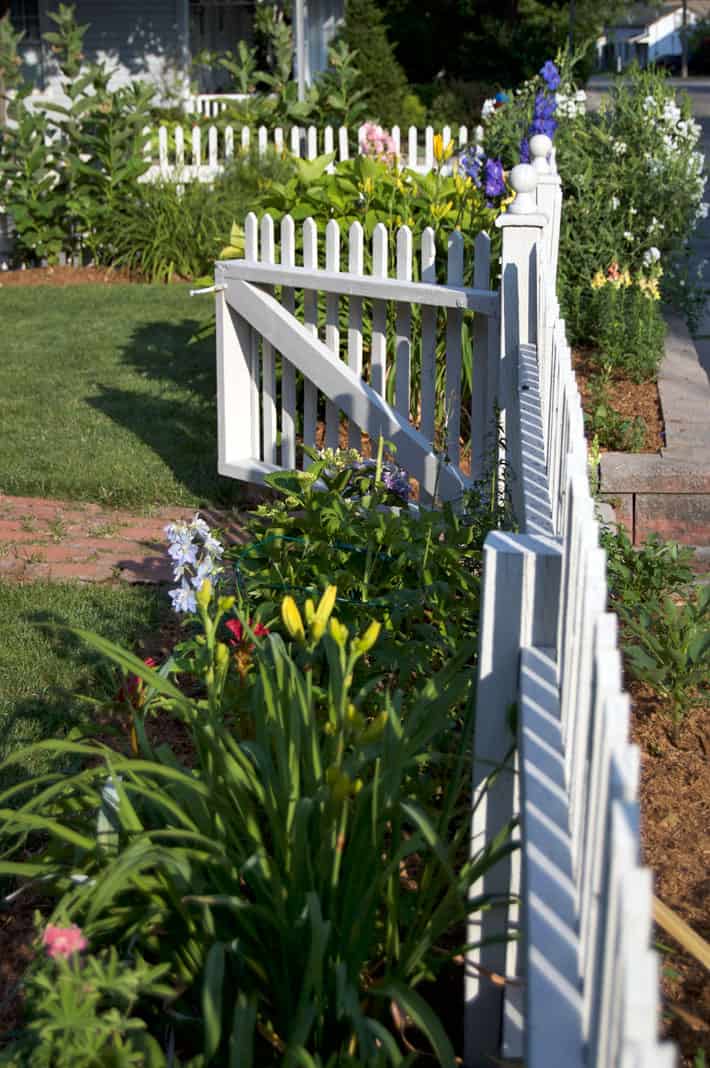 An English cottage garden is the kind of thing that looks really easy to achieve because it’s so casual and free flowing, but just like perfectly tousled-I’m-so-sexy-just-rolled-out-of-bed hair, it actually looks best when done by the hands of a professional.

For the amateur of anything, perfect is easy – imperfect is hard.

Take a bedroom.  You go to a store buy an entire bedroom suite (cause maybe this is 1952) and you stick it in your bedroom like Lego.  Bed in the centre, matching end tables on either side and a dresser on the long wall.  Done in a day.

Trying to decorate a bedroom with mismatched furniture that didn’t come as a set and still have it look great is HARD.  It’s more time consuming, more annoying and more difficult to get right. 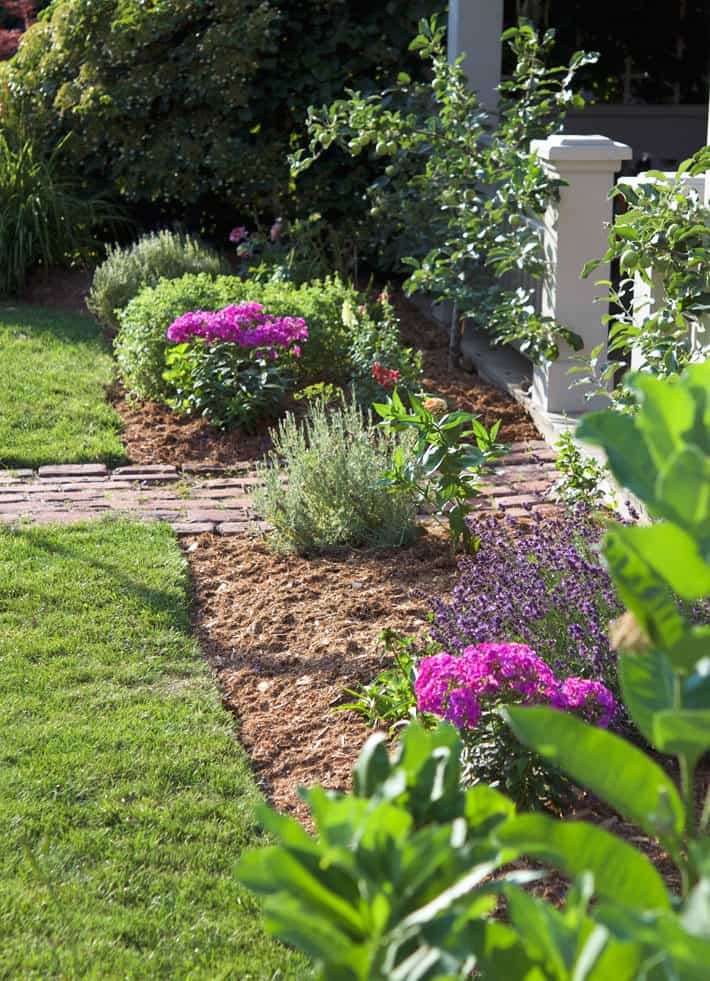 So I was anxious about trying to create a perfectly imperfect garden.   I have most of the elements I want but it’s still a bit awkward.  It’s young though.  It’ll grow into its looks. 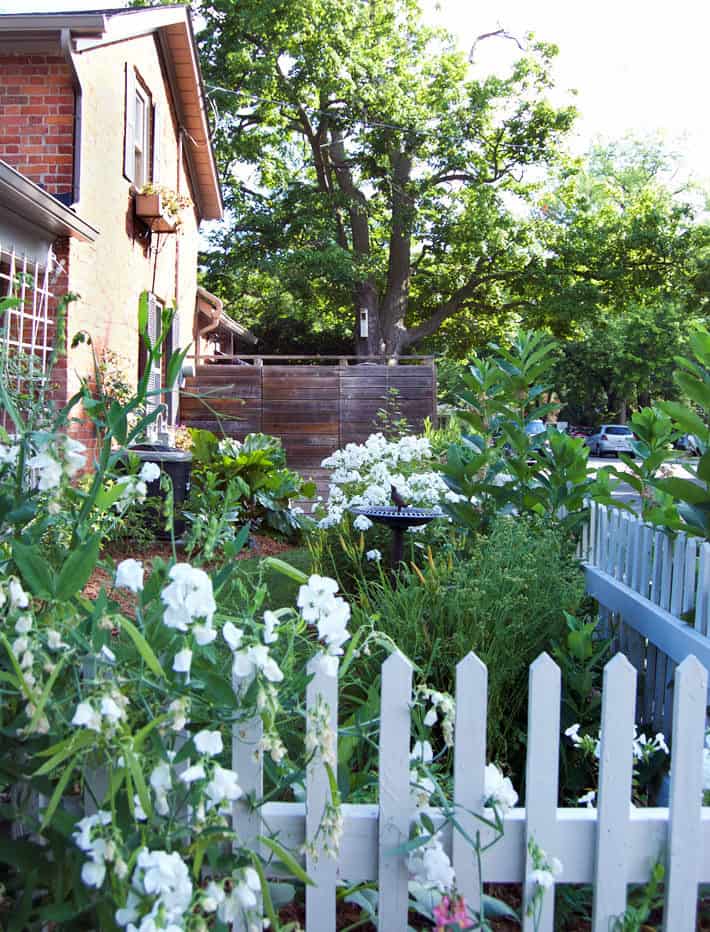 I was lucky enough to buy a house with a white picket fence, which is English Cottage Garden 101.  Picket, cast iron or privet fence.

Things should be wild, unmatching but controlled choas.  It shouldn’t feel like a woodchuck is going to dart out from under a bush and eat one of your toes.

Along the fence at the side of my house I have a few perennial sweet pea bushes (one white, two  purple), a few masses of phlox and daylily. Technically I shouldn’t have daylily in the English cottage garden because they aren’t very English at all. They’re North American by way of Asia.  But for now they serve the purpose of filling in space until other more English plants can be grown and split. 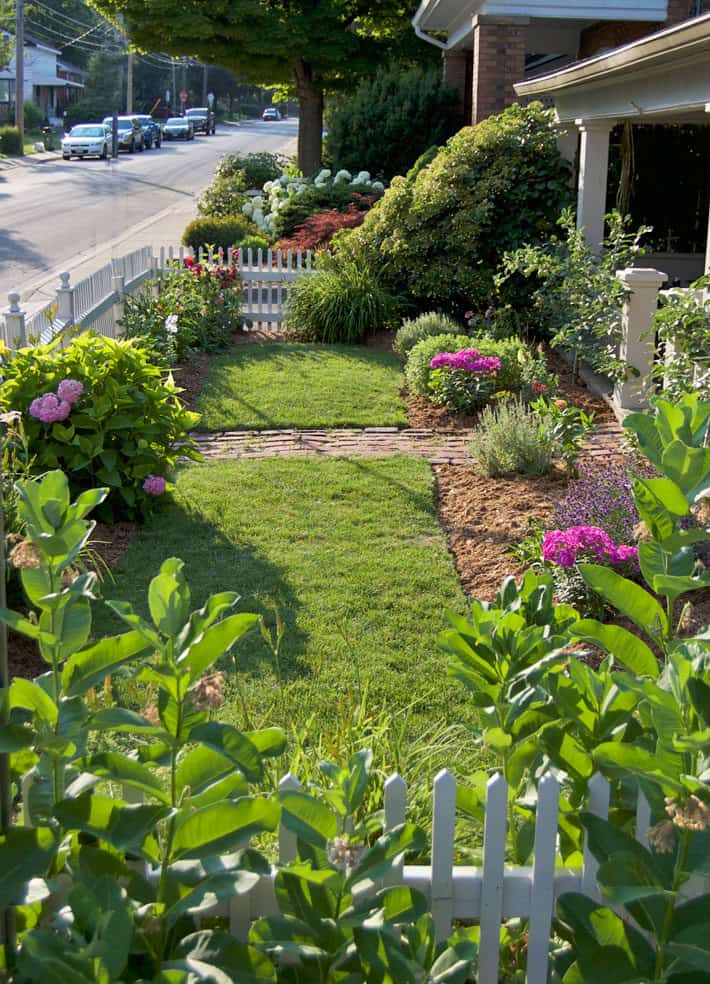 The front across the house has two espaliers on either side of my path which again isn’t very English cottage garden because of the symmetry but it still works.

I pulled out some massive herb bushes like sage and an old lavender but left the oregano and thyme bushes.  I hacked them back into submission and they work well. 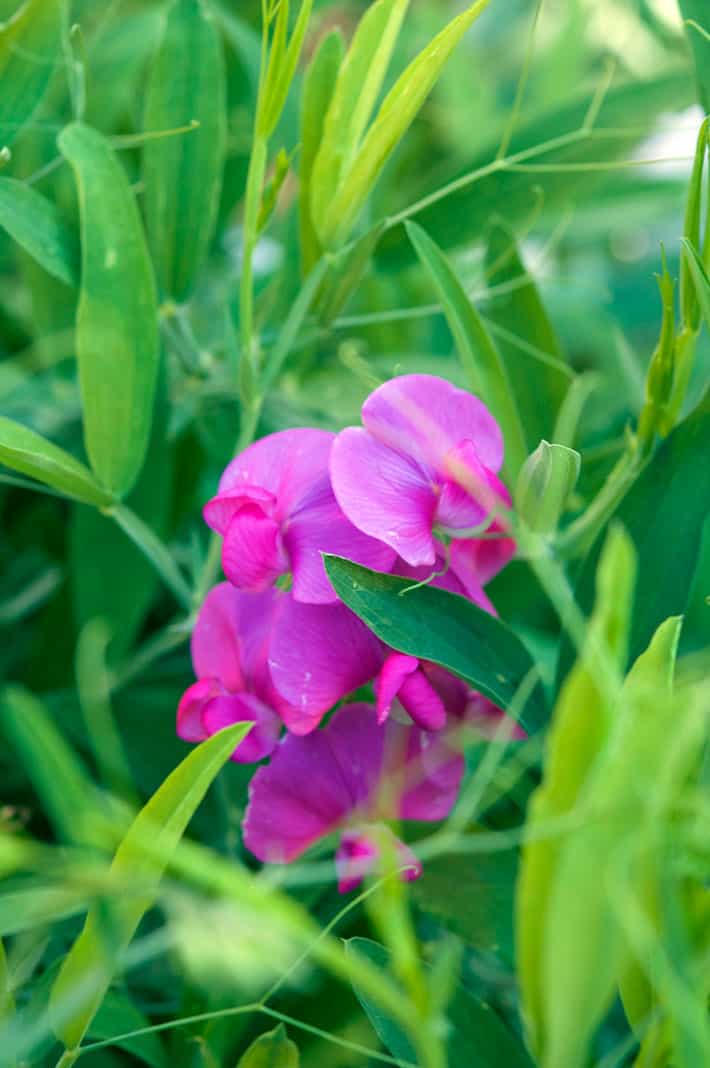 These perennial sweet peas were one of the few things I didn’t rip out several years ago when I turned my front yard into a vegetable garden.  They bloom from the beginning of July until into September and make the most perfect, long lasting little bouquets. 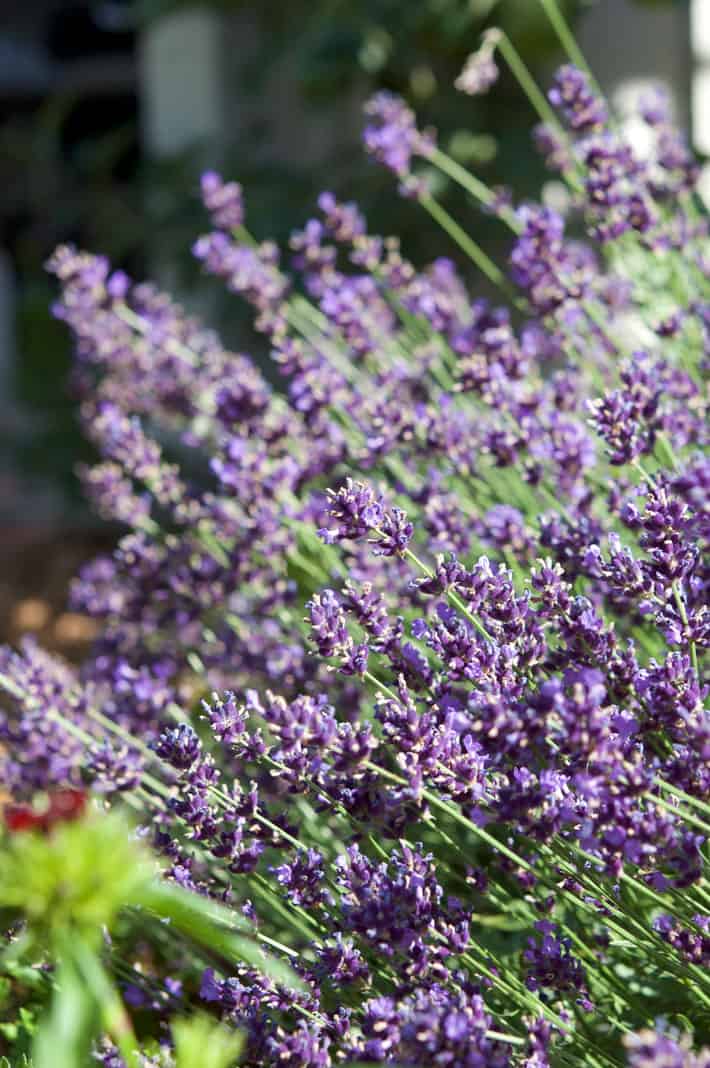 Picking up on the purple of the perennial sweet peas, I repeated the colour throughout the garden with lavender … 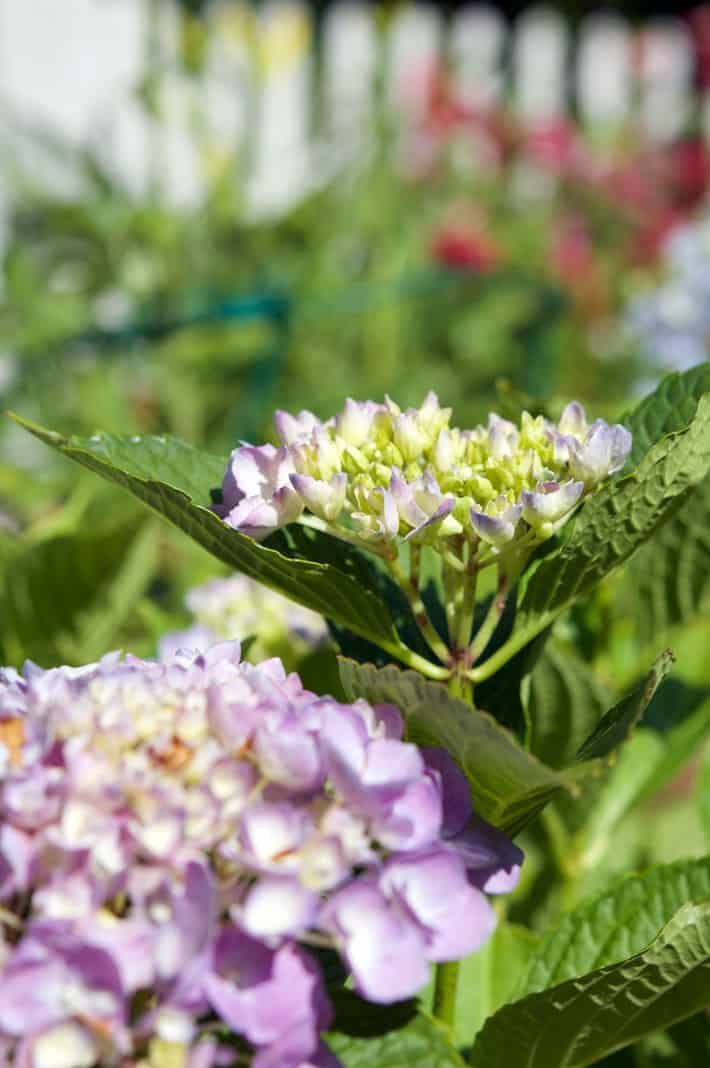 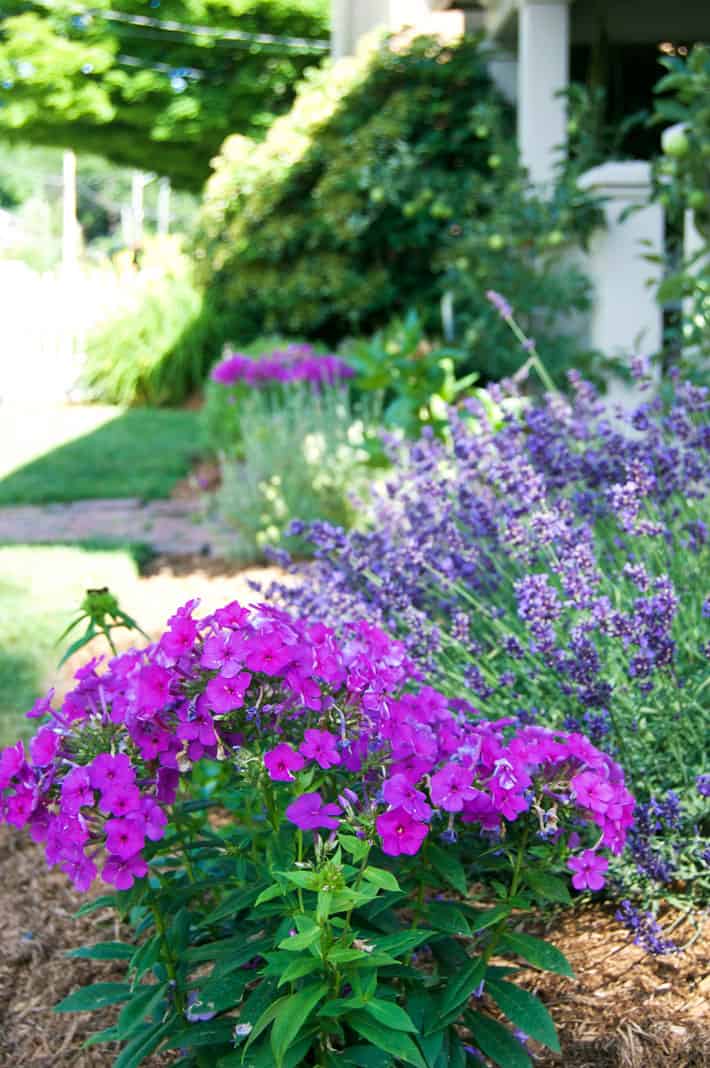 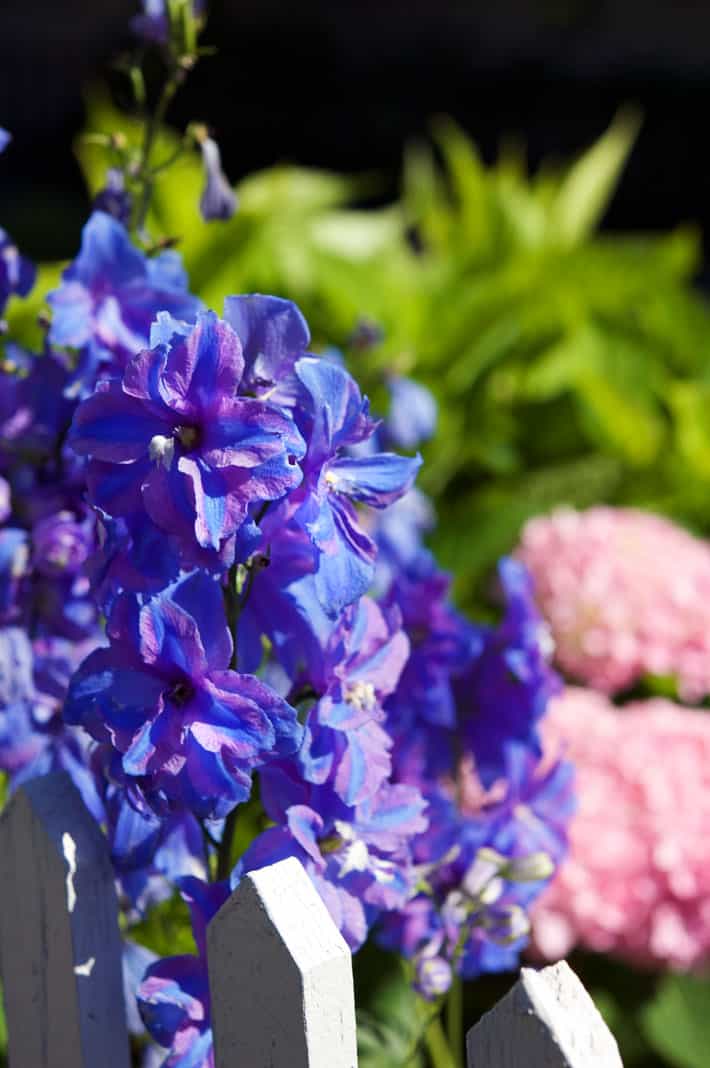 and a blue/purple Delphinium. 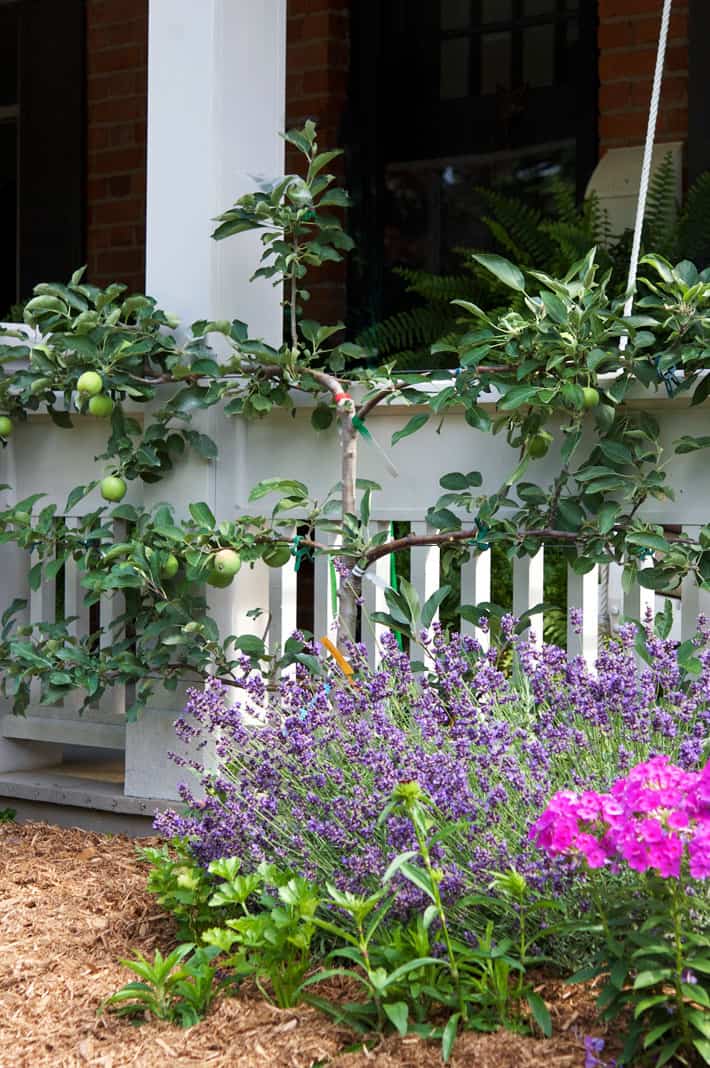 Plus I couldn’t completely abandon vegetables so every so often you’ll see some celery stuck in the beds. You can see a bit of celery trying to escape from under the left side of the lavender. 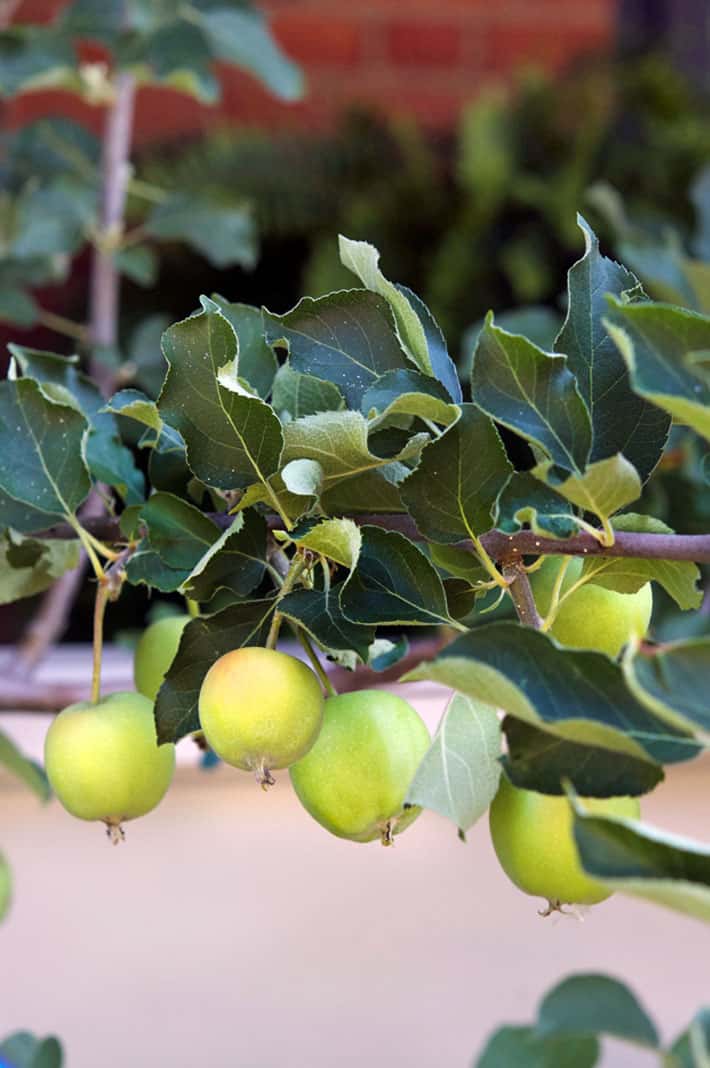 My apples have been decondomed for the time being because it’s been SO hot here that they were starting to actually burn in the plastic bags.  I like baked apples and all, but this didn’t seem to be the right way to go about them. 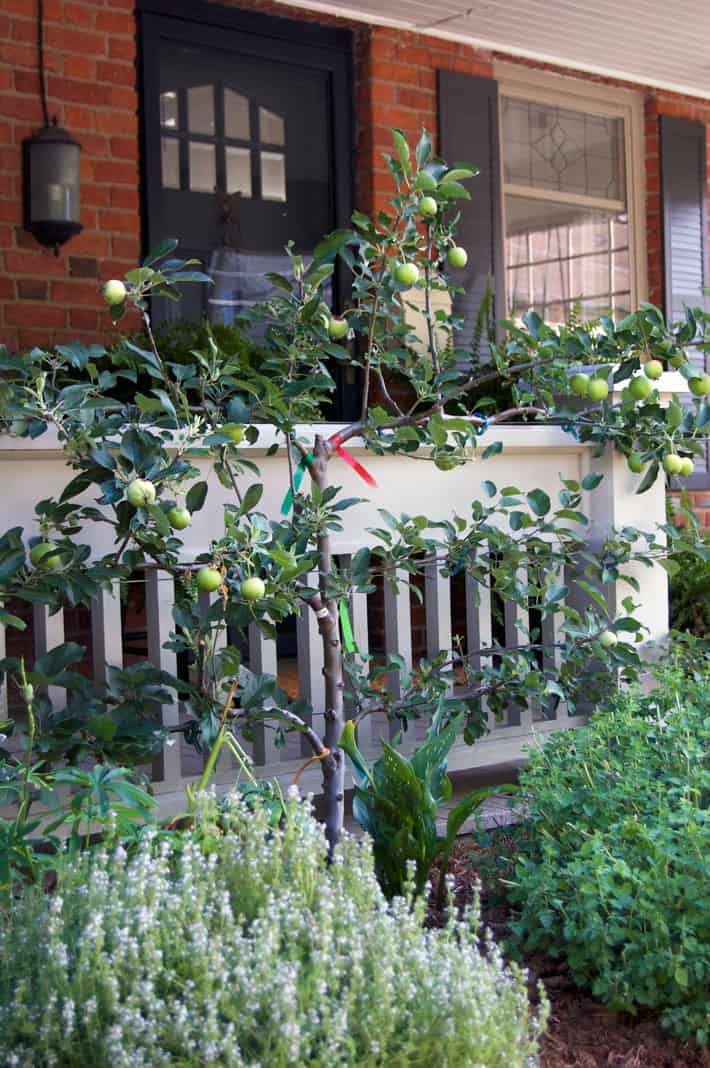 The foreground of this photo is the thyme with little white flowers over it. 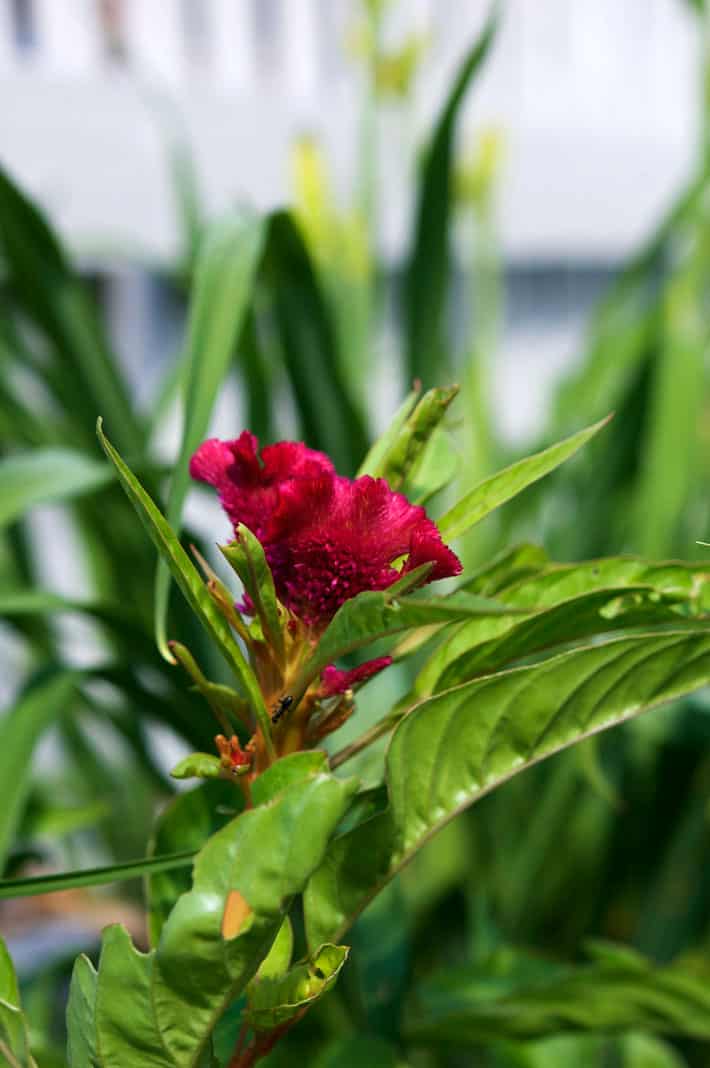 Cockcomb are tucked in different areas. 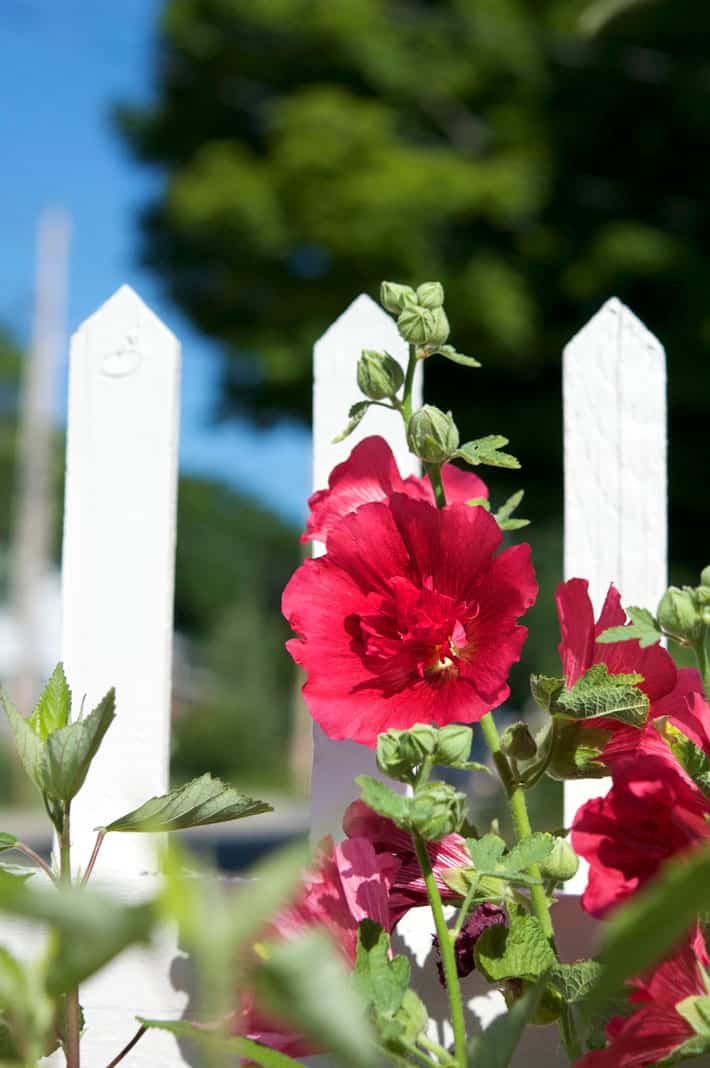 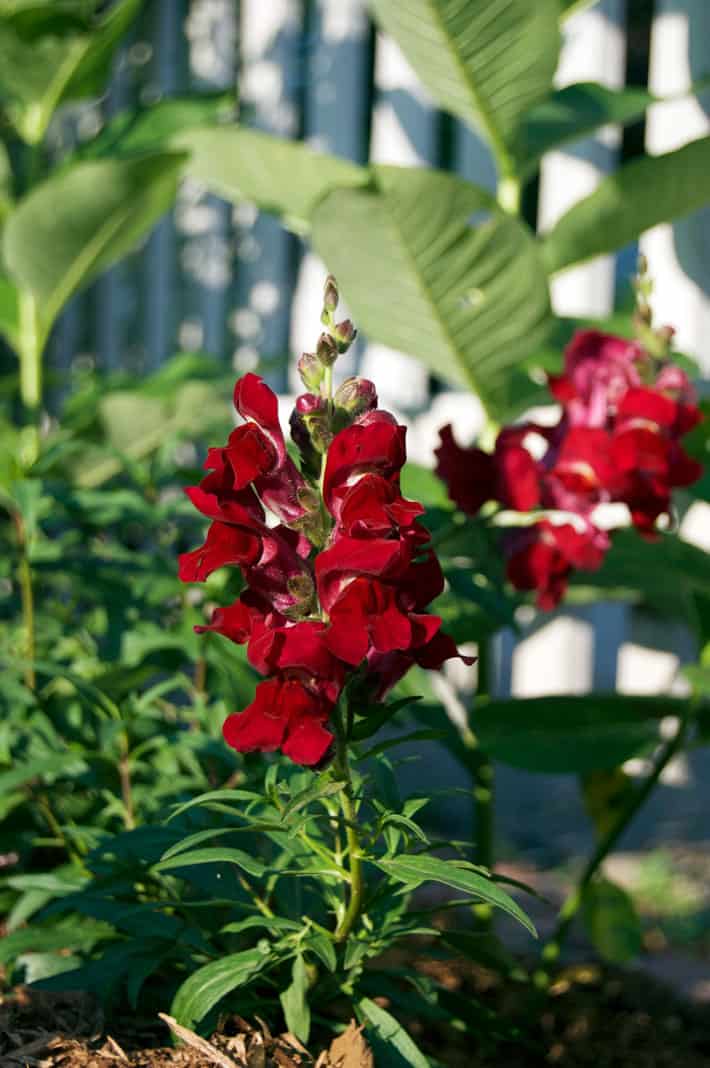 Also scattered through the garden are snapdragons. I grew a bunch this spring, plus tons of them sprouted up from last year’s snapdragons in the garden so I transplanted some of them into empty areas in the garden.  Of which there are many.

It’s going to take years for it to properly fill in. 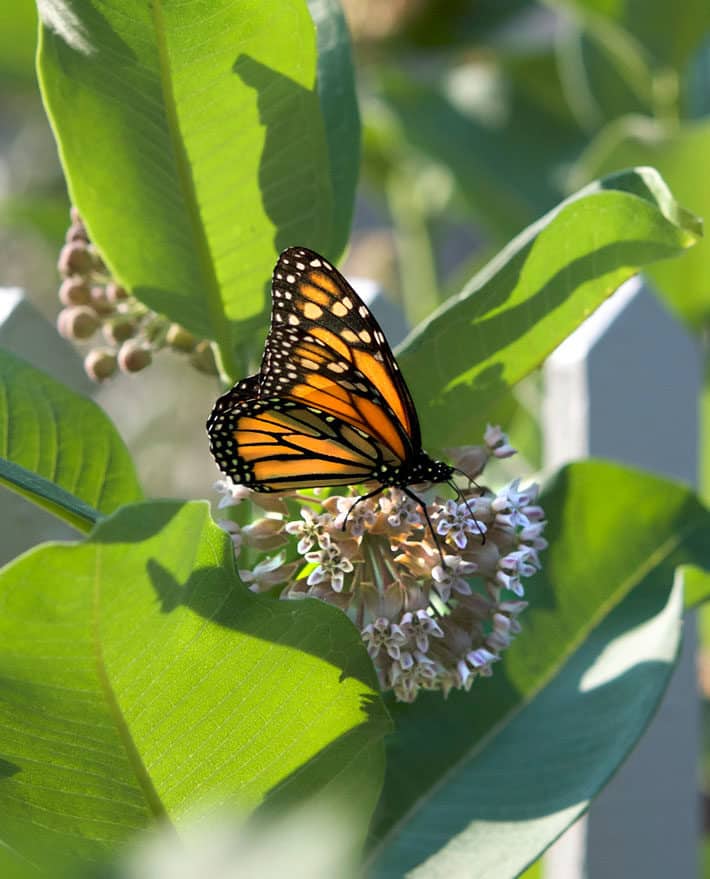 Taking up one major hunk of the garden is my milkweed patch which blends in perfectly with the rest of the garden.  Even if it didn’t I’d keep it because I like my Monarchs. 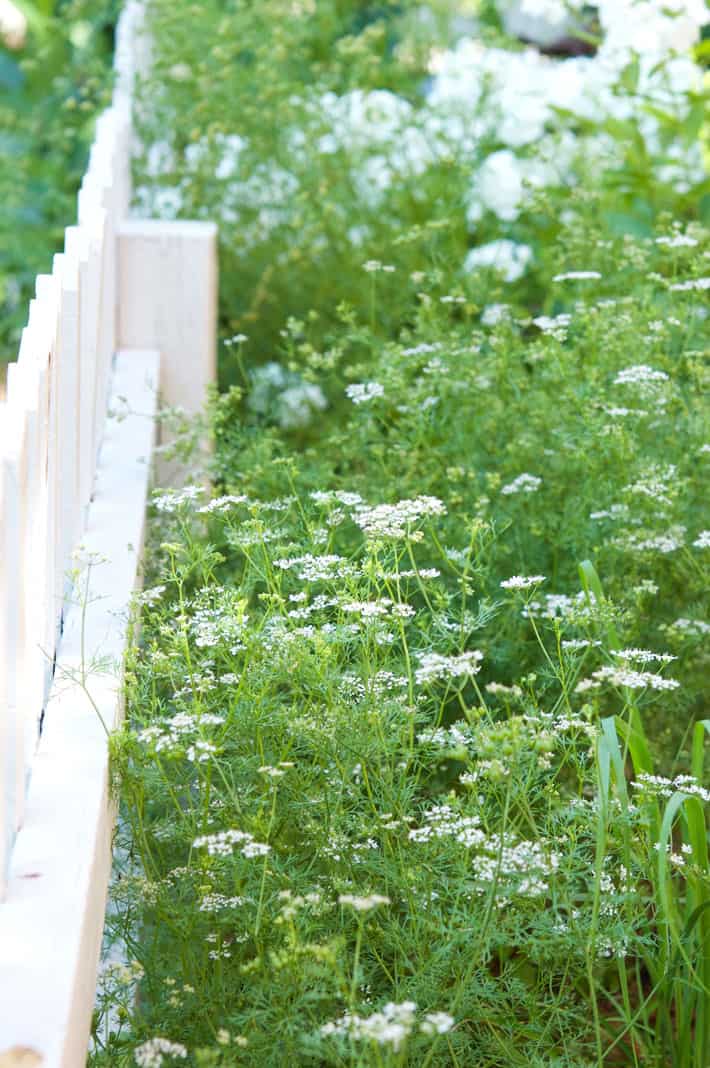 I’m always befuddled (that’s a word I’m going to use more now that I have an English Cottage Garden) when people tell me they have no luck growing cilantro.  I planted it once.  I will never EVER get rid of it.  As in, even if I tried my hardest I couldn’t obliterate it if I had a Tommy gun, a body burying shovel and a pinkie ring. It pops up everywhere year after year. 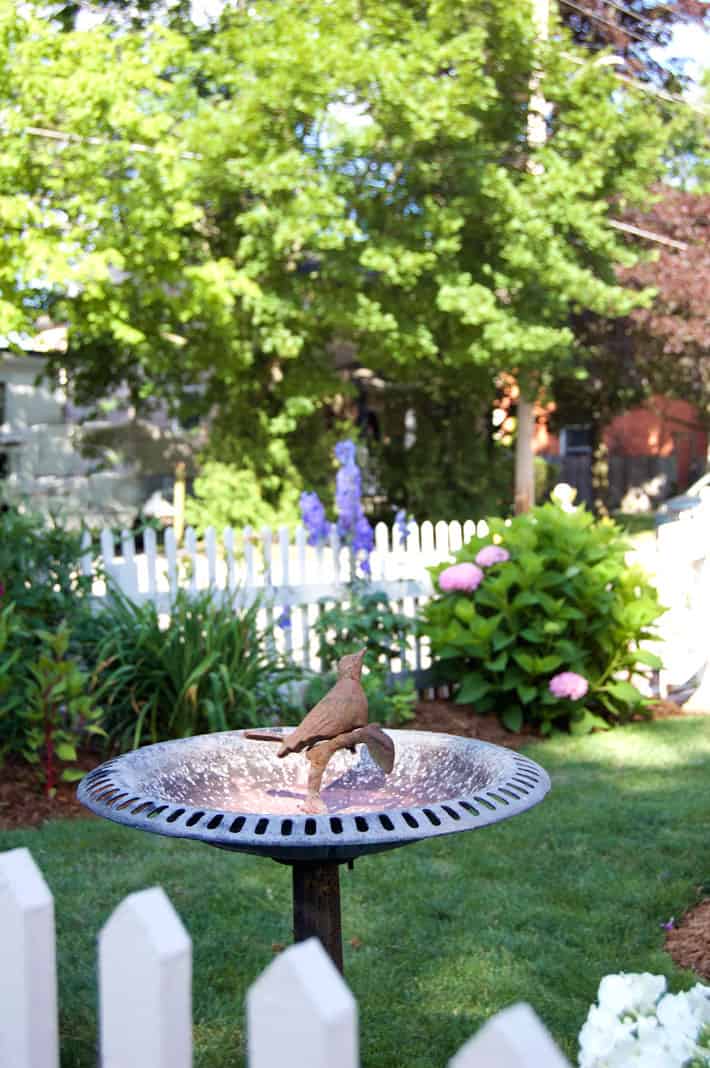 I knew I needed some sort of structural element so I decided on a bird bath.  I got this old cast iron one at a local auction for around $40.  Of course it isn’t filled with water at this moment in time but usually it is.

And because like I said before, I just couldn’t completely abandon vegetables.  The espaliered tomato plant.  One of three in the front yard actually. 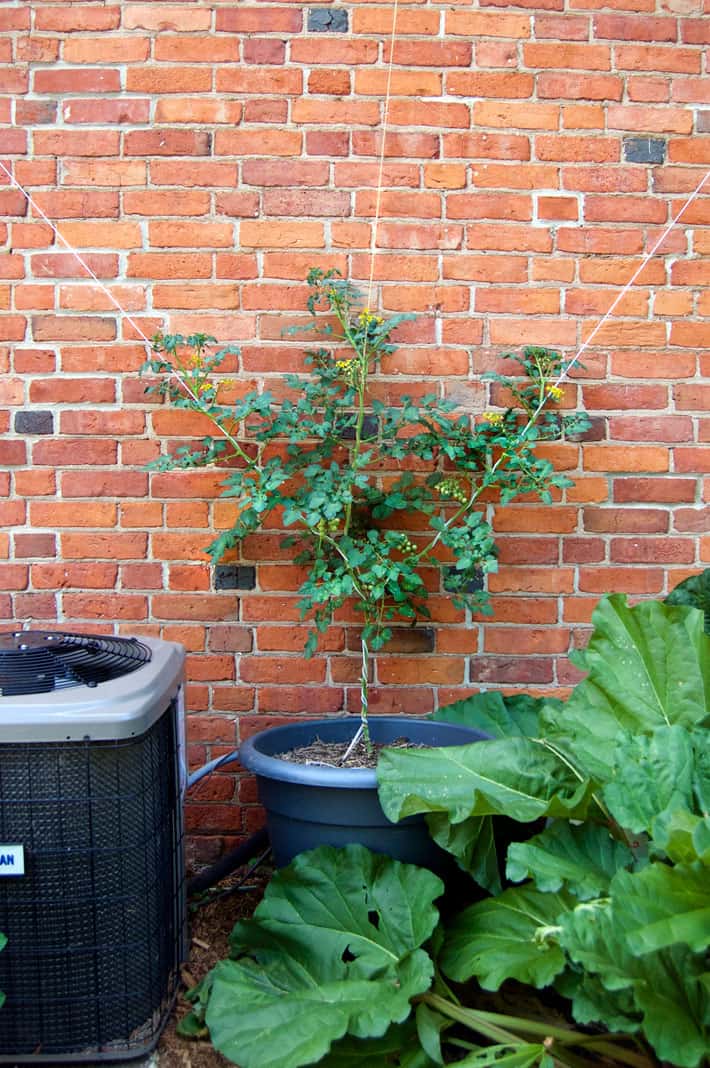 This particular tomato plant is Candyland, which births hundreds of small, currant sized tomatoes.  It’s an indeterminate tomato plant, which means it’ll keep growing taller and taller until the frost kills it. So by the end of the summer, it should be well up the side of my house by around 9 feet. 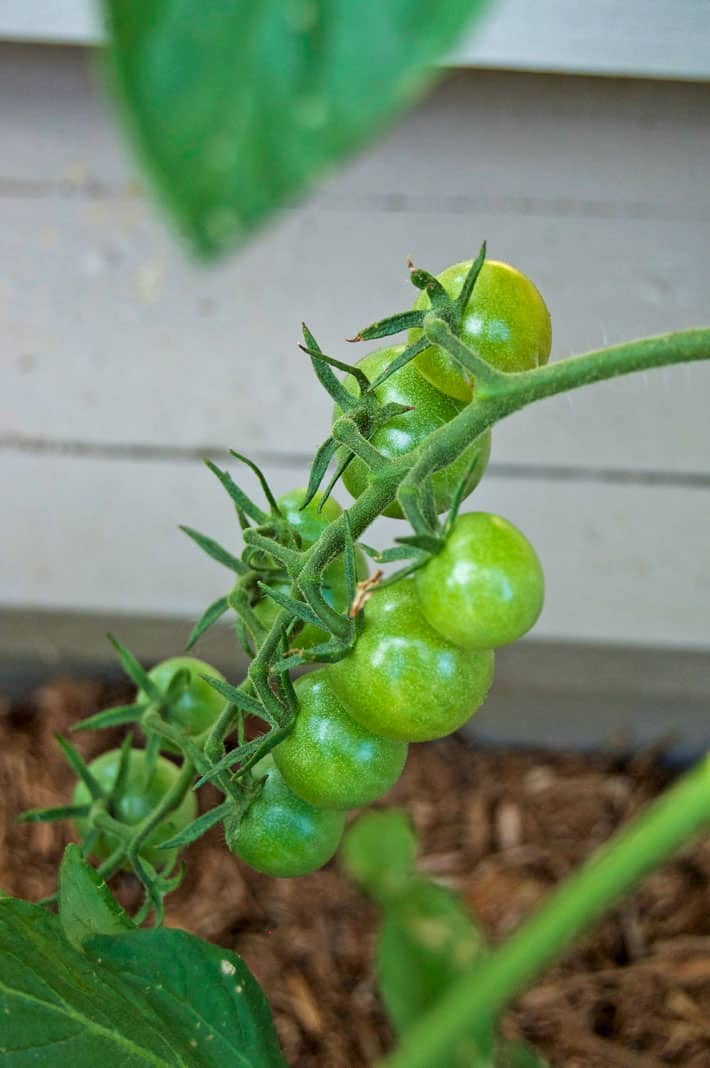 Growing up the trellis on the side of my porch is another tomato, this one a cherry tomato called Sungold that is also espaliered with the string method. 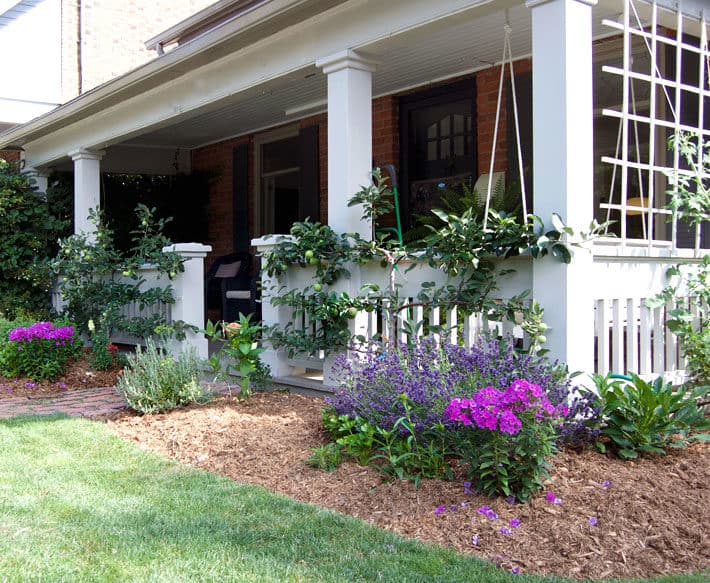 There are very definite gaps which still need to be filled in with something other than natural cedar mulch and fallen flower petals but things will get bigger over the years and fill in. Plus other plants will get big enough to split and replant. I think. I hope.  Vegetables were so much easier. 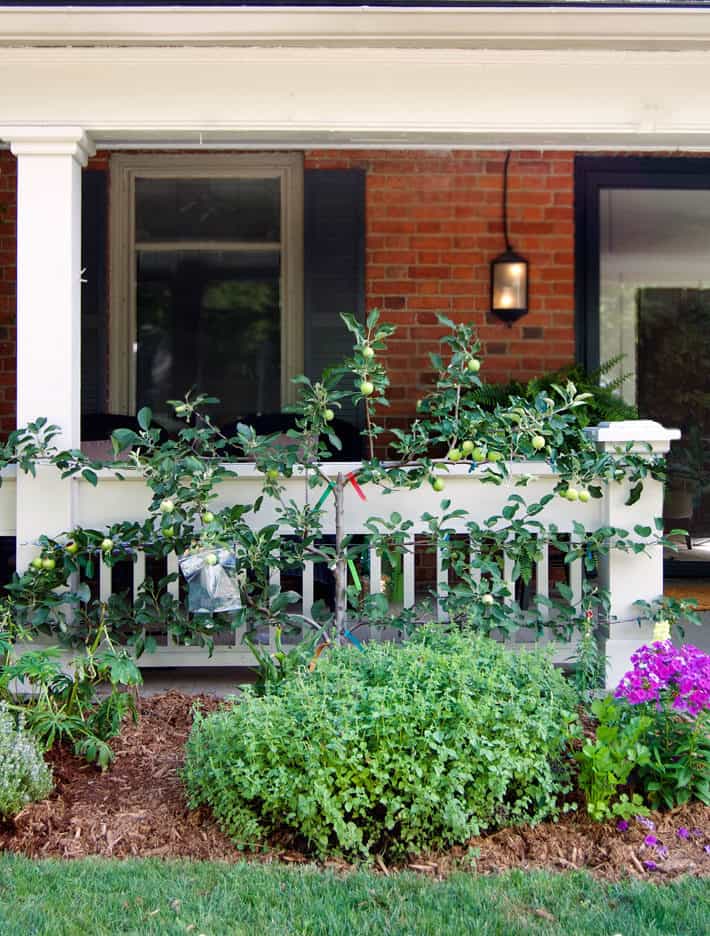 I missed a bag on the apple trees.  Did you spot it?  Or are you stupid, like me? 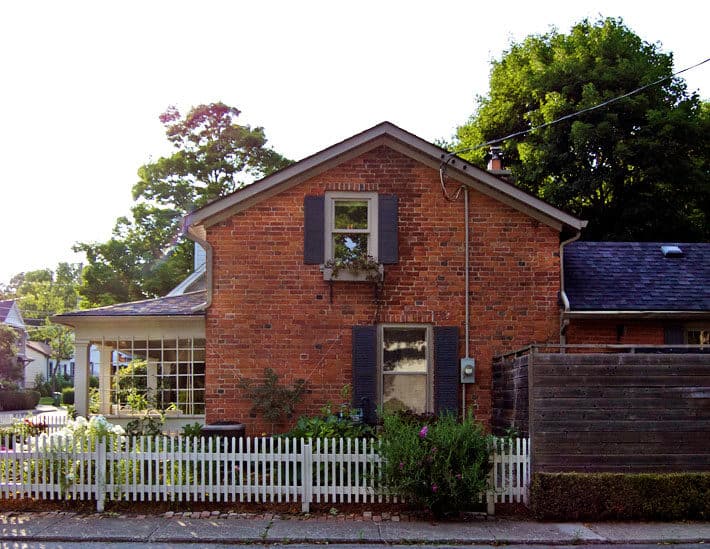 You might recognize the window boxes on the side of the house from a post I did a few years ago on How to Build a Window Box.  Actually, the title of the post was “Hey, Lady! You Know You Can Buy Those, Right?”. 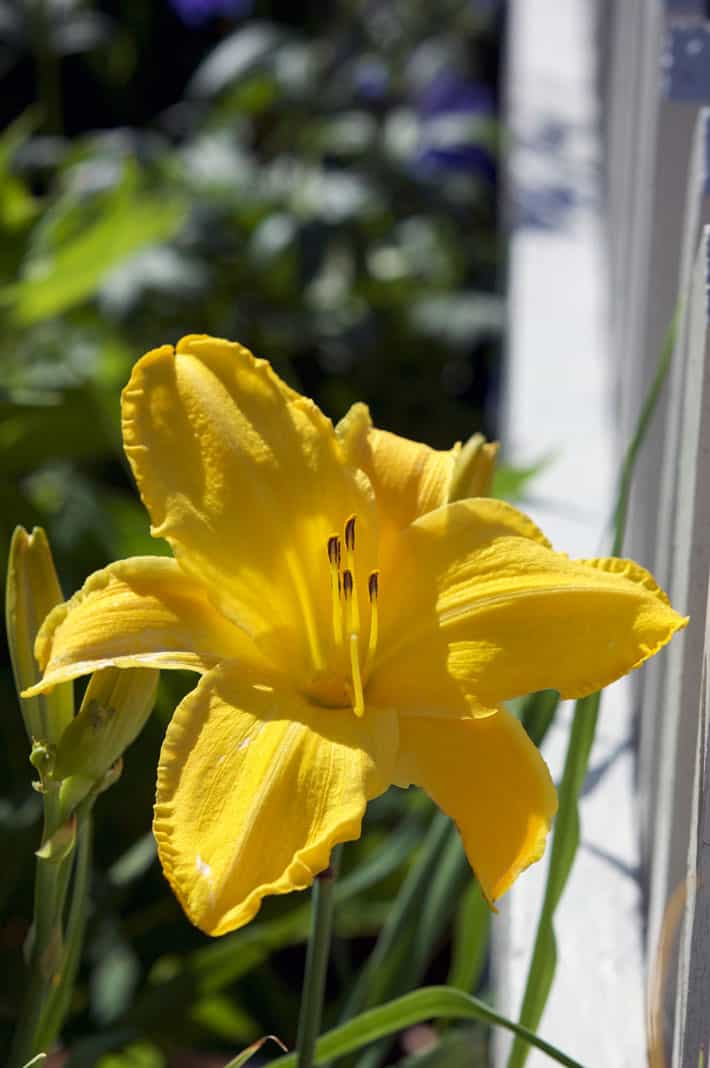 MASSIVE yellow daylily plants doing their daylily thing.  I’m assuming you all know that a Daylily is called a Daylily because each bloom only lasts for one day.  But if you didn’t know, SURPRISE! It’s true.

The brick path up to the house is uneven and bit hard to walk on and made from the original bricks from the house.  I’ll never change it. 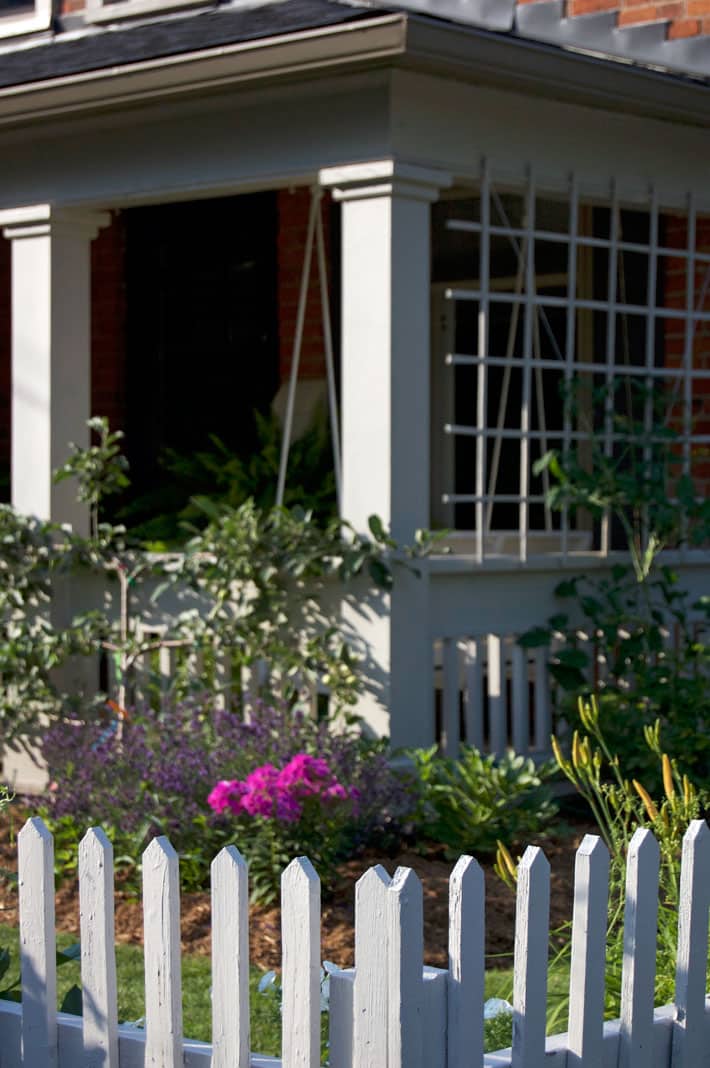 In My English Cottage Garden.

Flowers in the garden 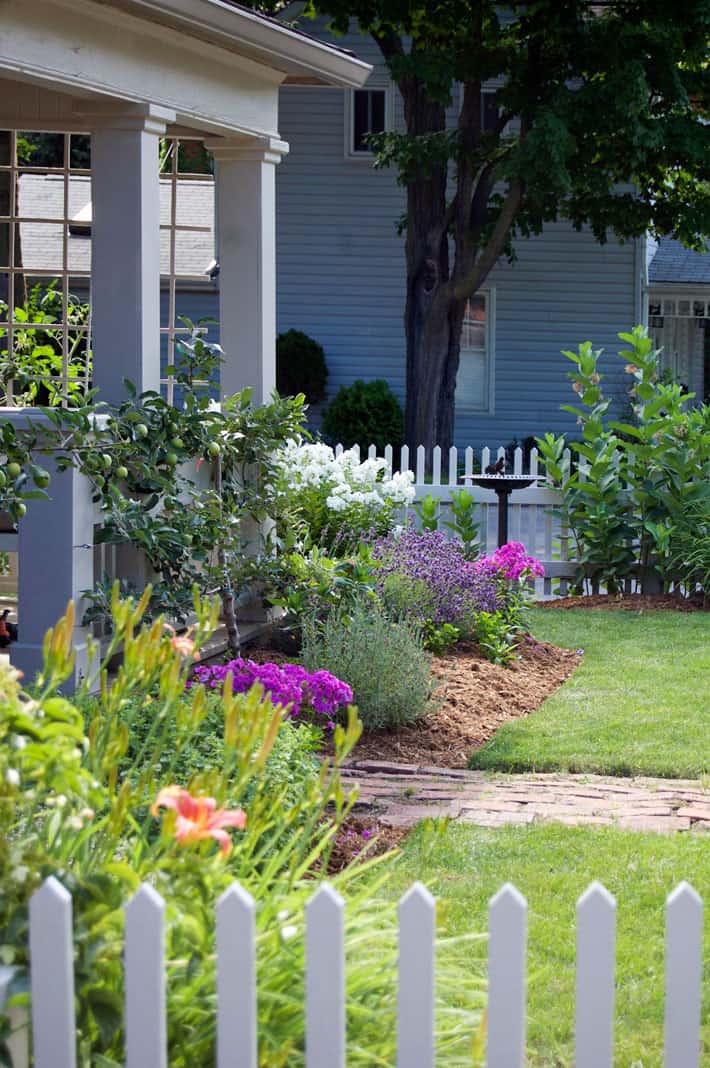 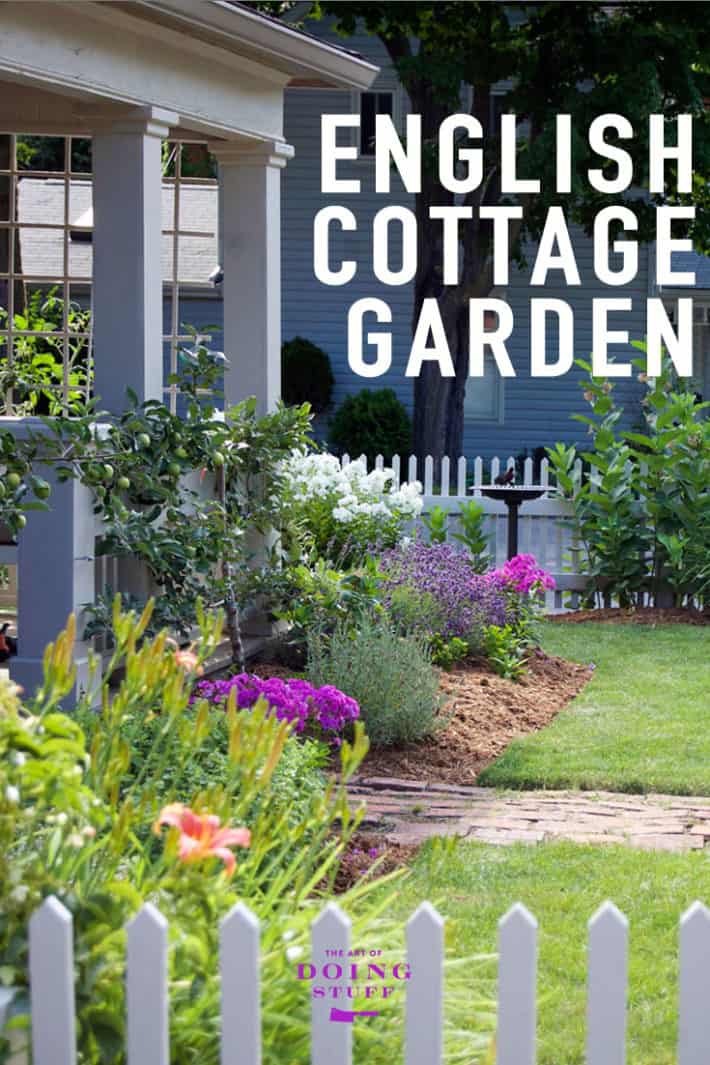