The Four Corners of the Kitchen.
The Stove.

It’s quite an old saying so you maybe haven’t heard it before.  Maybe.

But there’s a lot of truth to it.  The stove (or range if you prefer) is the guts of your kitchen.  And unless, like reader Susie, you only have a kitchen because your house happened to come with one, your stove is probably pretty important to you.

I told you before that I would be getting a BlueStar range.  I got mine from Costco as opposed to from BlueStar because even though it doesn’t have the same interior finish or quite as many BTU’s it’s also thousands of dollars less at Costco.

I paired it with an astonishingly powerful G.E. Cafe range hood from Home Depot.

And here they are … 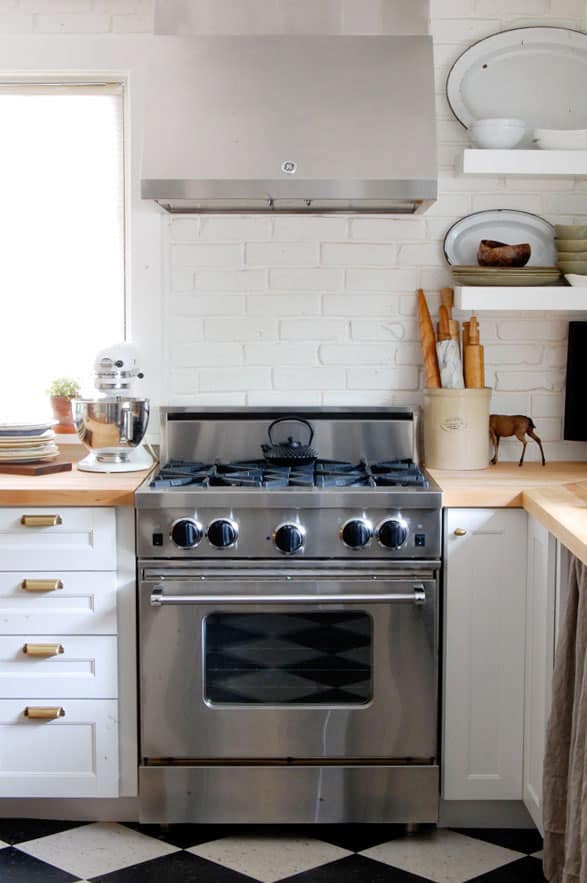 The BlueStar range (both the Costco and higher end version) have something that’s called an open burner system. Most ranges have a sealed burner. 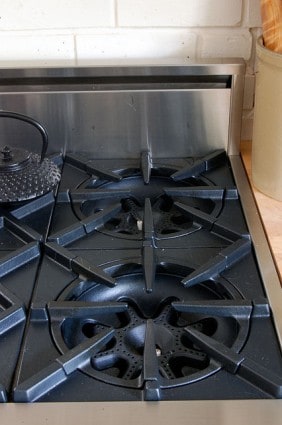 The open burner makes for easier cleaning of the stove because if a pot ever boils over it falls right through the burner system instead of staying on the surface of the stove and baking on there. 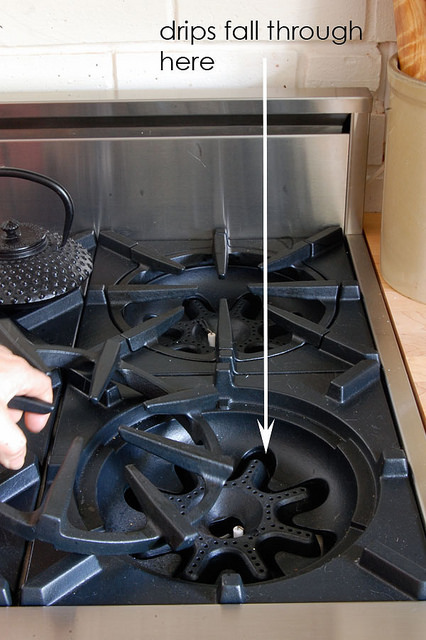 To clean up spills, you just slide out the tray underneath the burners and wipe it out.   If I were to tell you this has made my life 14 million times easier you’d probably think I was exaggerating.  I am not.  14 MILLION TIMES. 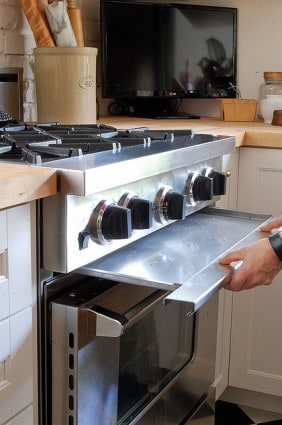 And the BlueStar open burner is designed so when you lift the centre grate out of the burner, you can fit your wok in there perfectly.  The outer grate cradles the wok, keeping it right next to the open flame and stopping the wok from sliding around your stove.

I believe we’re up to 28 million times easier now. 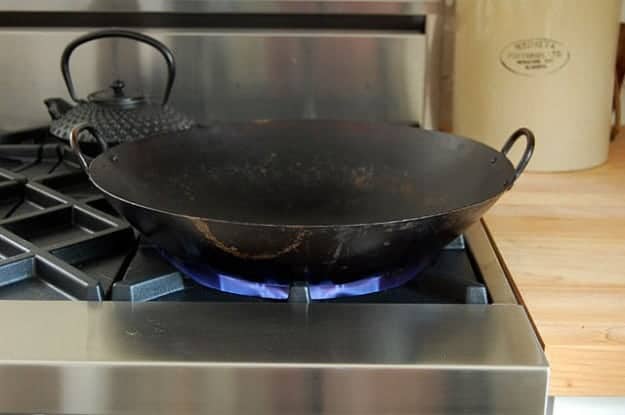 The other thing that changed my life was getting an exhaust fan. Or a range hood in fancy talk. I have lived in this house, cooking every single night, for 15 years without any range hood. If I ever made anything greasier than boiled water I had to run around the house opening windows and doors in a complicated pattern in order to get the smoke to suction out.

If I opened one window too little or a door too much I’d get smoked out of my own house and quite often spent the evening enjoying a pleasant dinner of grubs from the lawn while shooing away the well intentioned fire department(s). 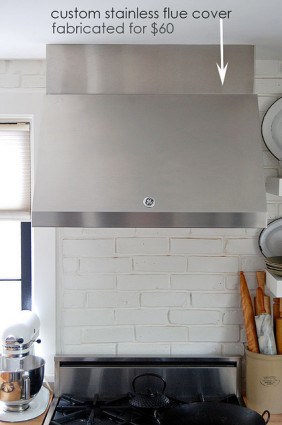 This is a POWERFUL range hood. And that’s what I’m recommending you buy if you’re ever in the market. My mother for instance bought a cheap exhaust fan and it just doesn’t work. It couldn’t suck a meow out of a kitten.

Some things you can skimp on in the kitchen and other things you can’t.  Don’t skimp on the range hood.  I say that with all the confidence of someone who has owned one for almost an entire month.

What you *can* skimp on is the flue cover.  That’s the chimney looking part at the top of the hood.  G.E. Cafe makes a narrow flue cover that just covers the width of the vent.  I wanted something that ran the entire width of the range hood just for aesthetic purposes.

Buying one like that would have meant a cost of around $250-$300 and it wouldn’t have fit perfectly  (I have 9″ above my range hood and the smallest one for sale is 12″).  So I found a sheet metal worker to make me a flue cover for a grand total of $60.

I’ve been using the BlueStar range for a while now and I have to say I’m glad I didn’t get the higher end version with more BTUs. I’m barely woman enough to handle the BTUs the Costco version provides.  Definitely NOT in need of more BTUs.  HOWEVER, if you’re thinking of making the jump to a range like this don’t be an idiot.  Like I was.

I assumed that because I already had a gas range that I could just have this new range hooked up to my old gas lines.  But because this range has a gas oven (my old one had gas burners and an electric oven) and is so much more powerful than my previous gas stove I couldn’t just hook it up to my old gas line.

My old gas lines weren’t big enough to provide enough gas to my new range.  If I were to have all 4 burners going and the oven there wouldn’t be enough power to have everything bubbling away at full capacity.  So I had to have the gas line running from my basement to my range replaced at a cost of around $650 if I remember correctly.