A few weeks ago, when it was still warm enough to wear shorts and a tee shirt I headed up to my mess of a community garden to start harvesting the vegetable equivalent of a surprise party.

Potatoes are unlike any other vegetable in that you have NO idea what you have until you dig them up.  Root vegetables in general  are a bit of a mystery, but with beets, carrots, turnips or just about anything else you can see the top of the vegetable growing out of the dirt so you generally know what it is you'll be pulling out. 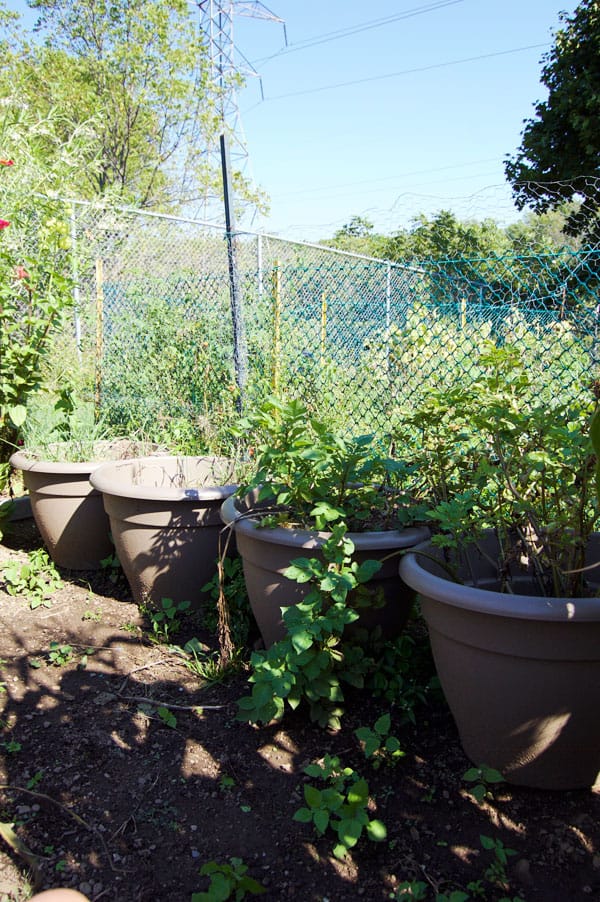 The potatoes on the other hand are a complete surprise.  It's what makes them the fun vegetable.  Well that and their willingness to be up for pretty much anything.  Bake? Fry? Scallop? Mash? Roast? YEAH!  I'm a POTATO!!!  I'm down with it all! 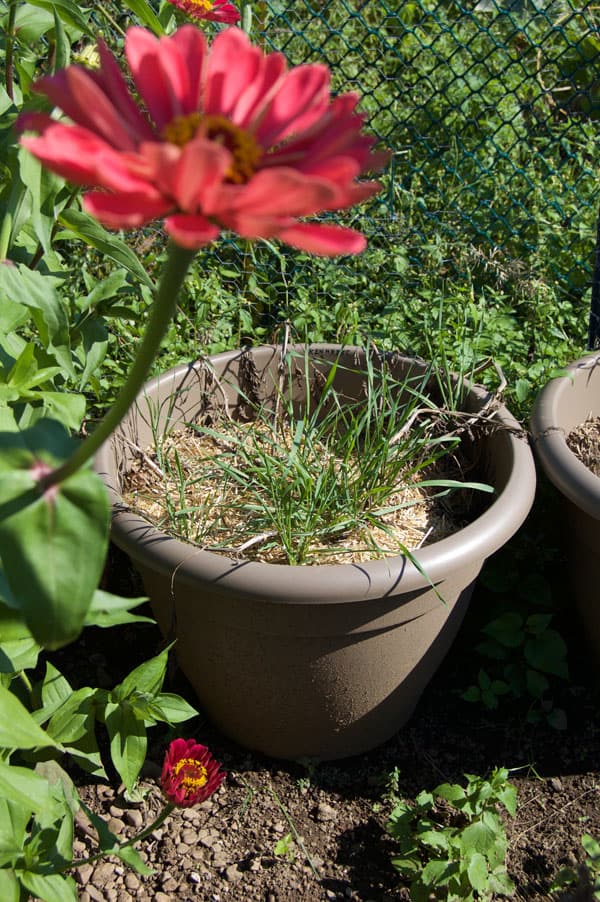 The odd time you'll come across a less than cooperative potato that decides it's had enough of hanging out with you.  It lets you know of it's wish to liberate itself from your custody by self destructing into a liquidy pile of foul smelling goo. 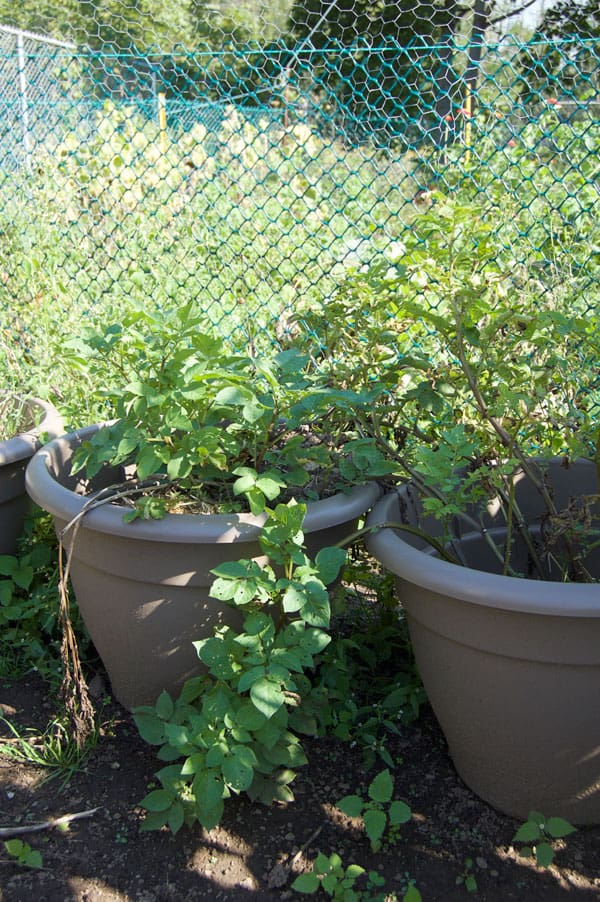 As I was saying, I went up to my community garden to dig up my regular potatoes a few weeks ago.  I grew them 2 different ways this year with a few side experiments. 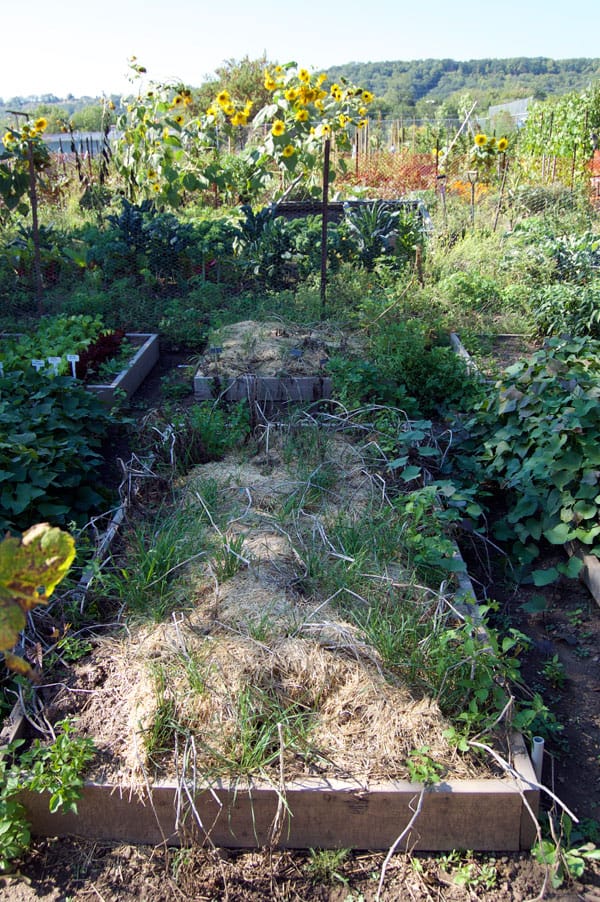 The raised beds are a HUGE pain to dig up.  I tried using my U Bar but the spaces between the tines were too big and didn't bring up any actual potatoes. It did do a good job of loosening the soil though. 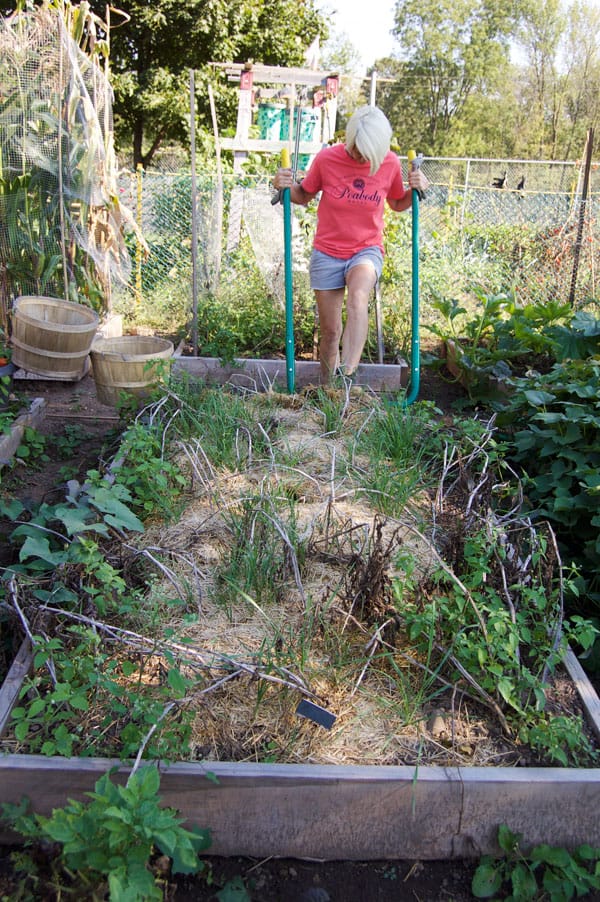 The thing about digging up potatoes is you're gonna cut them in half if you use a shovel.  But ... I used a shovel.  It's the only way to get all of them up.  Unless your soil is so loose that you can just pull the whole potato plant up, you're going to have to sacrifice some potatoes.  If they're big enough and you injure or cut them in half all you have to do is let them scab over and they'll be fine. 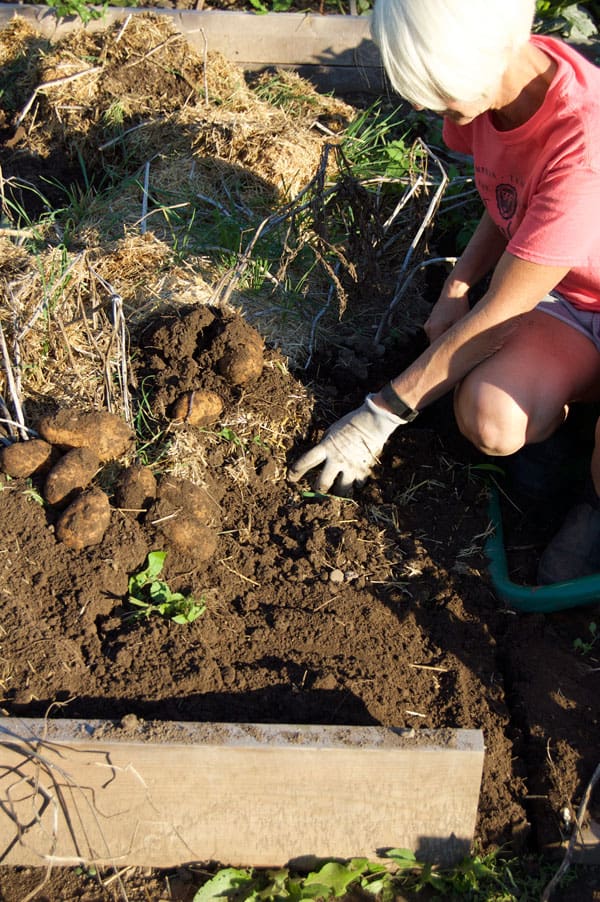 They won't last as long in storage as an unharmed potato, so just use the ones that you mutilated first.

I also experimented with not hilling some of my potatoes.  When you read about growing potatoes the first thing you inevitably read is that you have to "hill" them.  So as they grow you keep adding soil or straw around them to allow more potatoes to grow presumably.  I've always hilled.  This year ... I took a chance on a few areas and didn't hill just to see what would happen.  Nothing happened.  I got the exact same potato production whether I religiously  hilled the plants with straw or not. 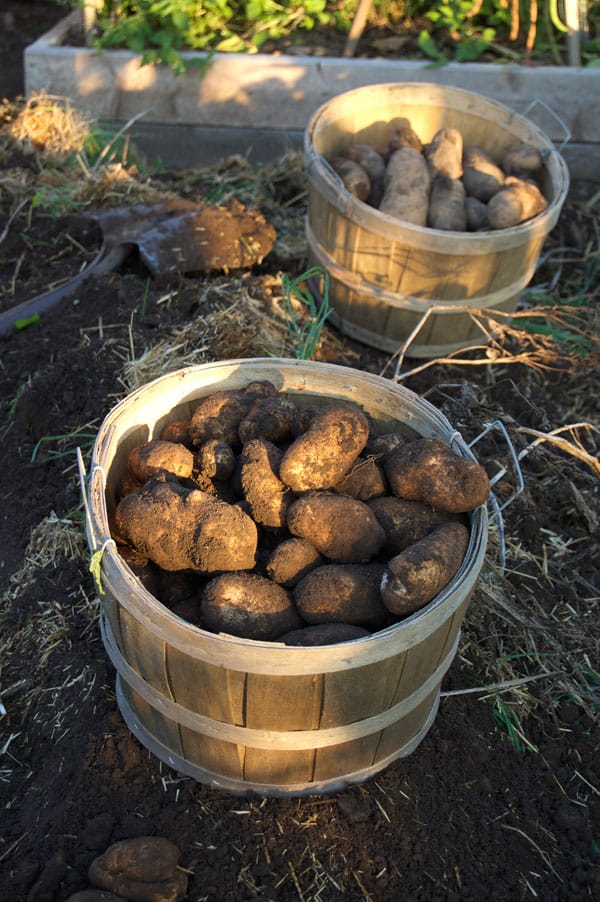 My raised beds produced a LOT of potatoes.  One might describe it as an insane amount for a single gal to be growing but you never know when you're going to have to make a 64 pound  gnocchi.  You just don't know.

I got around 50 pounds of potatoes from my 8' x 4' plot, planting one seed potato per square foot.  Not a huge return but way more potatoes than I'll ever need.  And yet.  I couldn't leave it at just that when I was planting in the spring.  I had to plant another 4 smaller beds of potatoes.

Plus a few pots of them.

Because of that whole possible gnocchi thing. 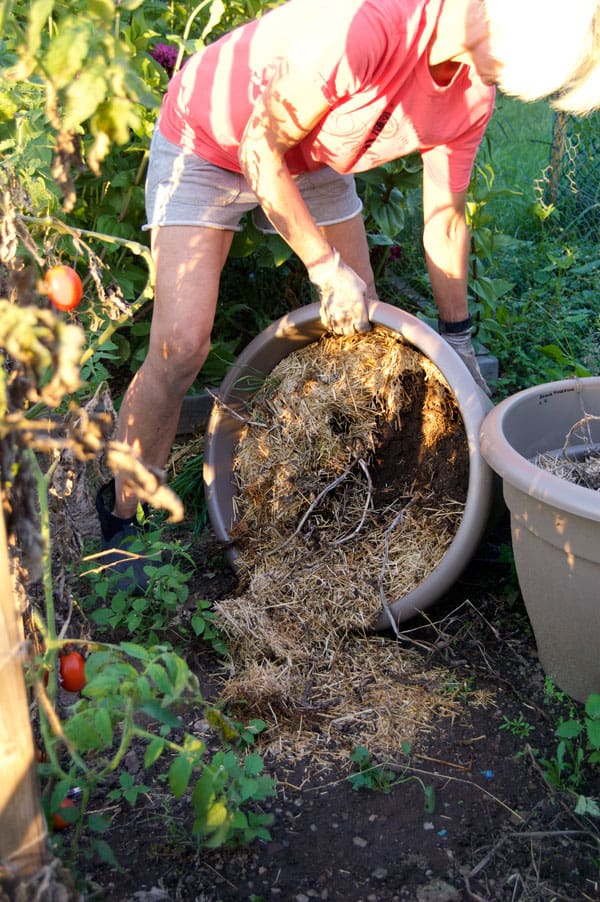 Compared to the potted potatoes the raised bed plants were a huge success.

Granted, harvesting potatoes from pots is way easier because all you have to do is dump the pot out and pick out your potatoes.  At least that's what the Internet would have you believe.  In reality a pot big enough to grow potatoes in is quite heavy when it's filled with soil believe it or not.  One can't pick it up and dump it out so much as lean, push, swear and cry over it before finally relenting and digging the soil out by hand.

Once you dig a bunch of the dirt out by hand the pot will be light enough to tip over providing you have a very large grunt in you. 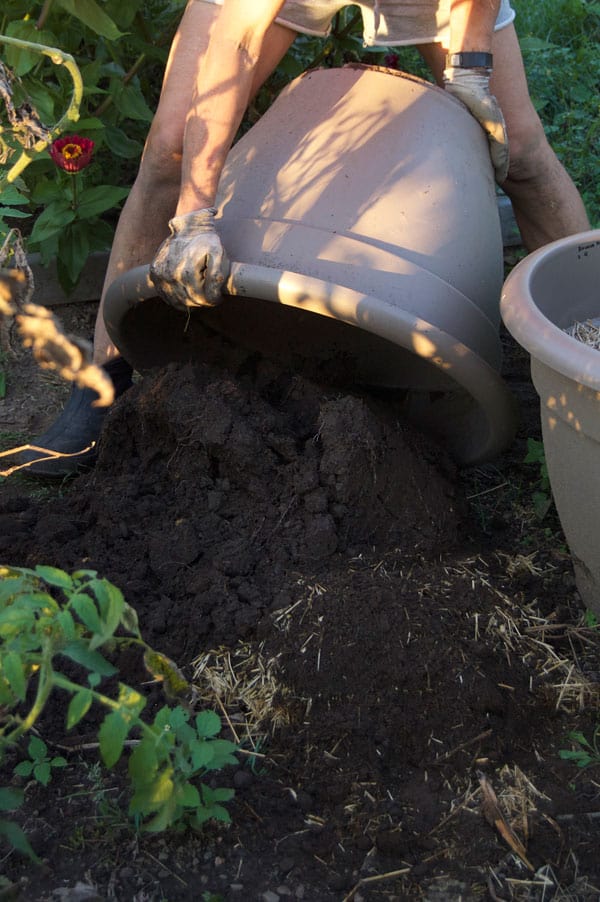 For me the planters didn't yield a very big harvest. About half of what a regular planting would have.  It could have been because I had 3 plants per pot which was too much for such a small space, or it could be because potatoes like to be cool and plants in pots are always hotter than plants  in the ground. 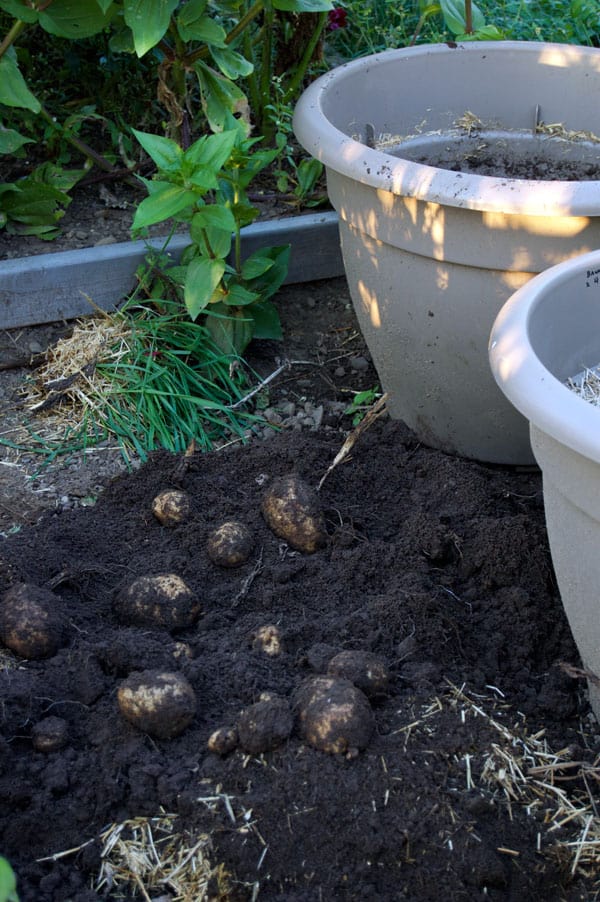 If you only have space for a container of potatoes then it's a great way to go.  But if you have the space and garden to grow them in the ground that's what I'd tell you to do. 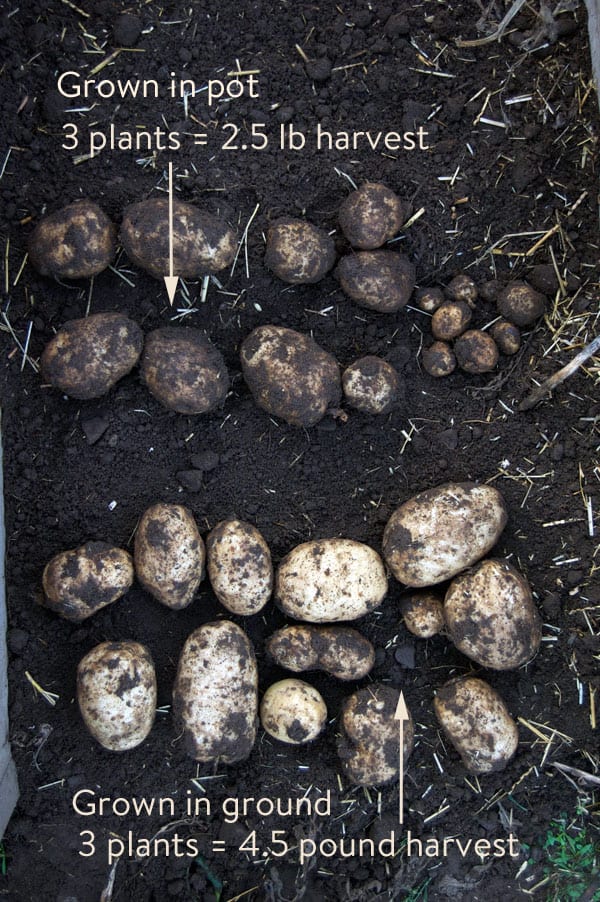 I had a few beds dedicated to potatoes and 3 big pots in which I grew Kennebecs, Russets, Banana Fingerlings, Chieftains and Peruvian Purple potatoes, which as it turns out are about the healthiest thing in the world you could eat if you're looking to fight cancer.

In total I dedicated 61 square feet to my potato; my love.  I got 100 pounds of potatoes from it. 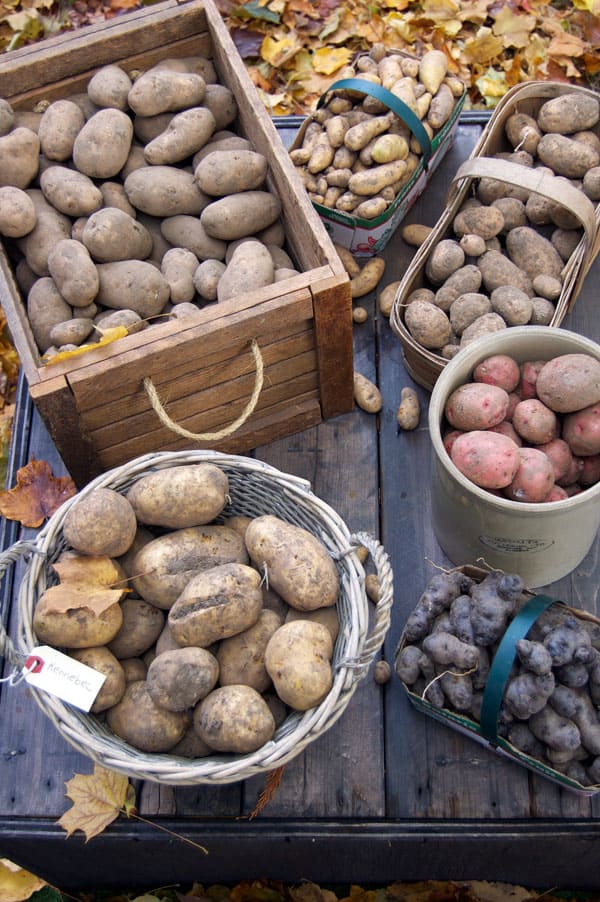 Come spring, I'll show you what a person who has eaten 100 pounds of potatoes looks like.  I suspect the only difference between that and the above photo will be the lumpy bumps will be accompanied by a big smile.