The one thing you want in your house to completely suck, is your vacuum.  Have a clogged central vacuum that doesn't suck?  Here's how to fix it. 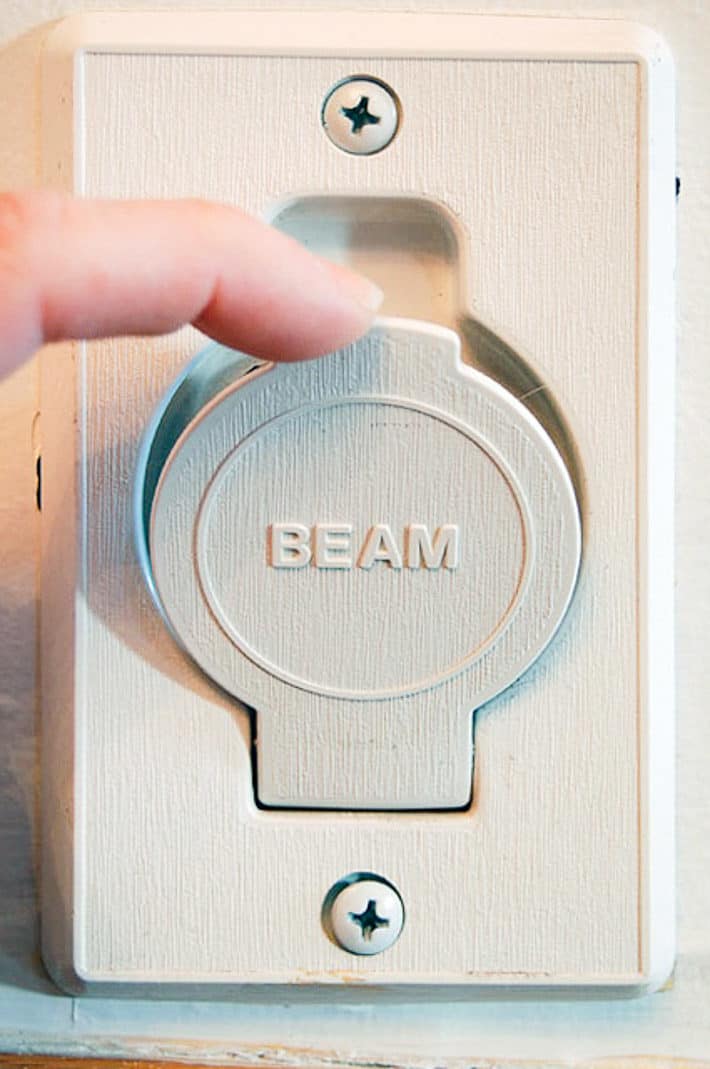 When I first moved into my house many years ago I was pretty upset it didn't have a central vacuum.  But since it also didn't have a laundry room, a dishwasher,  air conditioning, or a miniature stage with velvet curtains and performing mice wearing teensy, tiny top hats,  I wasn't really surprised.  Disappointed, yes.  Surprised, no.

I was however surprised to find out when I first wrote this post 7 or so years ago that not everyone knows what a central vacuum is.  They seem to be much more popular in Canada than in the United States.  In Canada for instance, Costco has a selection of 13 central vacuum systems for you to choose from.  In the United States, Costco has a selection of 2.

What is a Central Vacuum?

A Central Vacuum (otherwise known as Central Vac.) is vacuum system that runs by a series of tubes throughout your house. The tubes are hidden behind the walls, with the actual vacuum canister being housed in either the garage, basement or utility room. Access to the vacuum is achieved through ports around the house.  Just plug in the hose and GO.  You empty the canister whenever it gets full. Depending on the size of your house and canister that could be as infrequently as once a year.

Most people have them professionally installed but it's also something you can DIY.

One day, not long after I bought my home, after a particularly hard day of fixing up the house and searching for talented mice, I laid my weary head down on the spare room bed to take a nap.  Which in itself is highly unusual for me.  Now I see, it was kind of divine intervention by the large appliance God in the sky.

You see, I dreamed, (and it was one of those reallyyyyy realistic dreams where you swear it's actually happening) ... that my house had central vac.  It was hidden behind the bed in the spare room.  In my dream.

When I woke up, I took a peek behind the bed in my spare room.  No central vac.  Not even a performing mouse.  Just a wall.

So, the next day I went up to Costco, bought myself a central vac kit, brought it home and installed it.  It's really not as hard as you think.

Just don't forget that in addition to the Central Vacuum unit you ALSO have to buy an installation kit which is all the pipes and inlets you need to instal the system.

That central vacuum I installed worked for 11 years with NO problem.   Suck, suck, suck. Then one day it didn't. It sucked a little, but it didn't have enough pressure to even gobble up a bit of cat fluff.

If you too have a central vac that sucks but not nearly enough you have a few options.  Low suction on your central vac. can be one of a few things. It could be as simple as needing to clean your filter or empty  out the canister.  If that doesn't do the trick chances are you have a blockage.

Here's what you do to fix your blockage.  First have a big hot cup of coffee and a popcorn sized bowl of prunes.  No ... wait.  Wrong blockage.

How to Unclog a Central Vacuum

1.  Determine where your hose is blocked.  If you get low suction at all of your outlets, it means your blockage is either in the hose or more likely, between the first outlet and your canister.   If you only have low suction on one outlet, the blockage is between that one and the one that's working fine.

My blockage was between my first outlet and the canister so any of the outlets past that didn't work either.

The solution is simple and almost guaranteed to work.  The only problem is ... you need a second vacuum.  Something powerful like a shop vac. or a one of those little car vacuums.  Which is what I used.

2.  To unclog your central vac., just stick the hose from your portable vacuum into the offending central vac. outlet and let 'er suck. 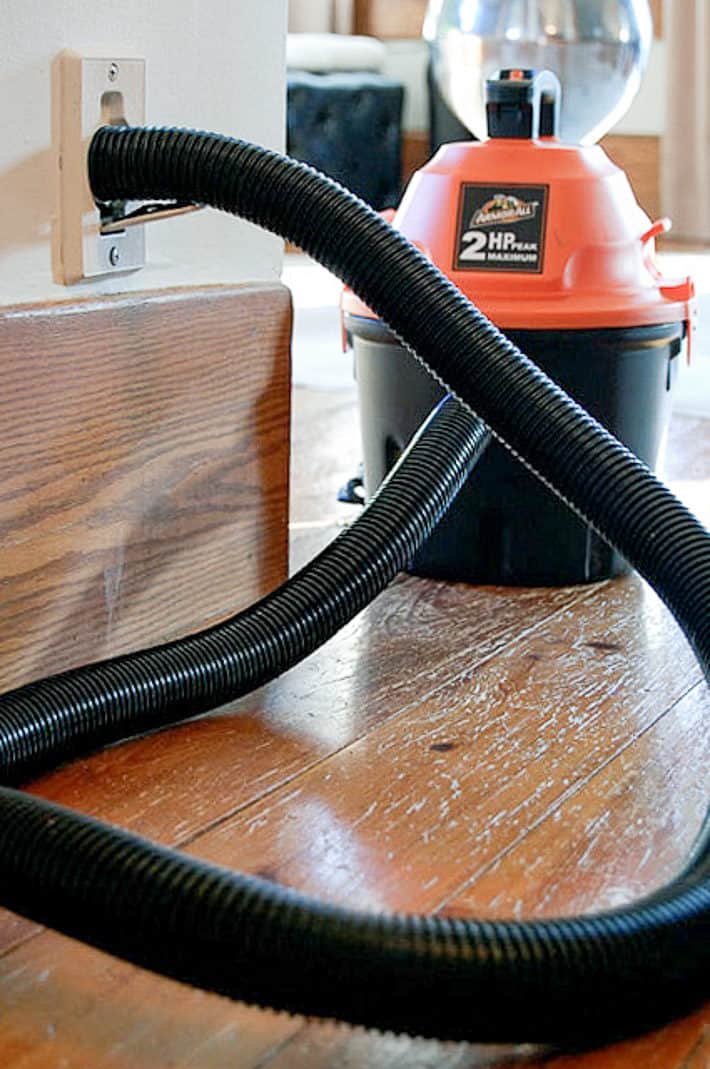 The hose should just fit right in the outlet and create good suction.  If not just wrap a towel or your hands around it to create a good seal.

For me, a big hunk of cat hair came up right away.  I pulled it away with my fingers.  Then I gave it another suck. 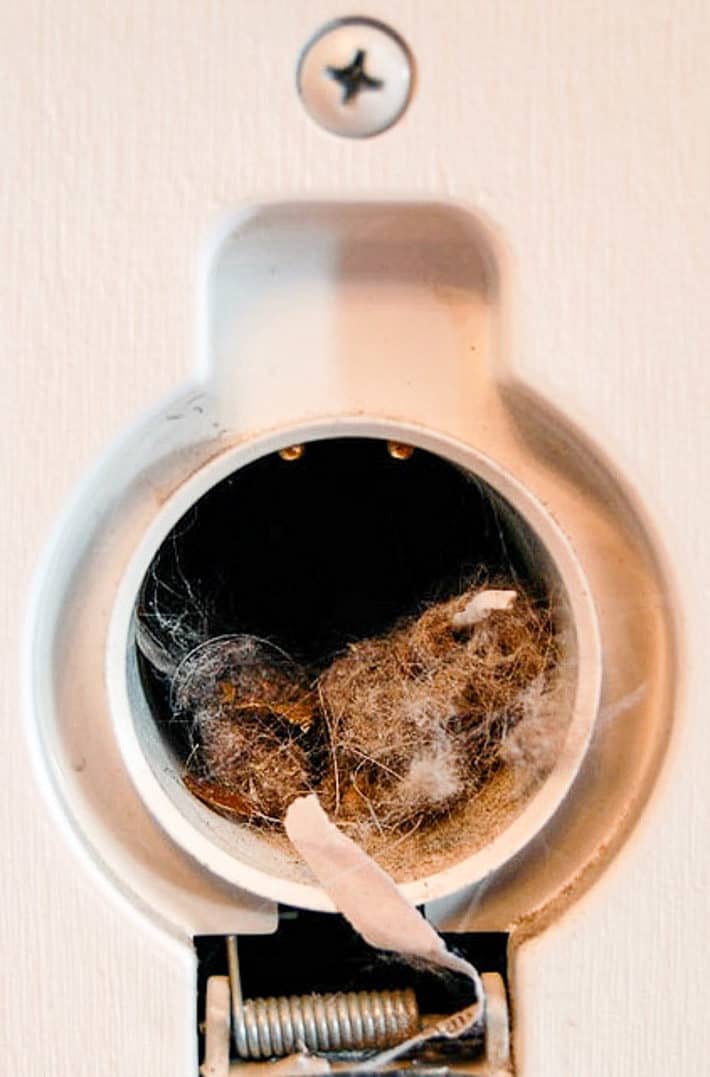 This time, I got cat hair and a little bit of Christmas.  It was quite exciting and fulfilling. 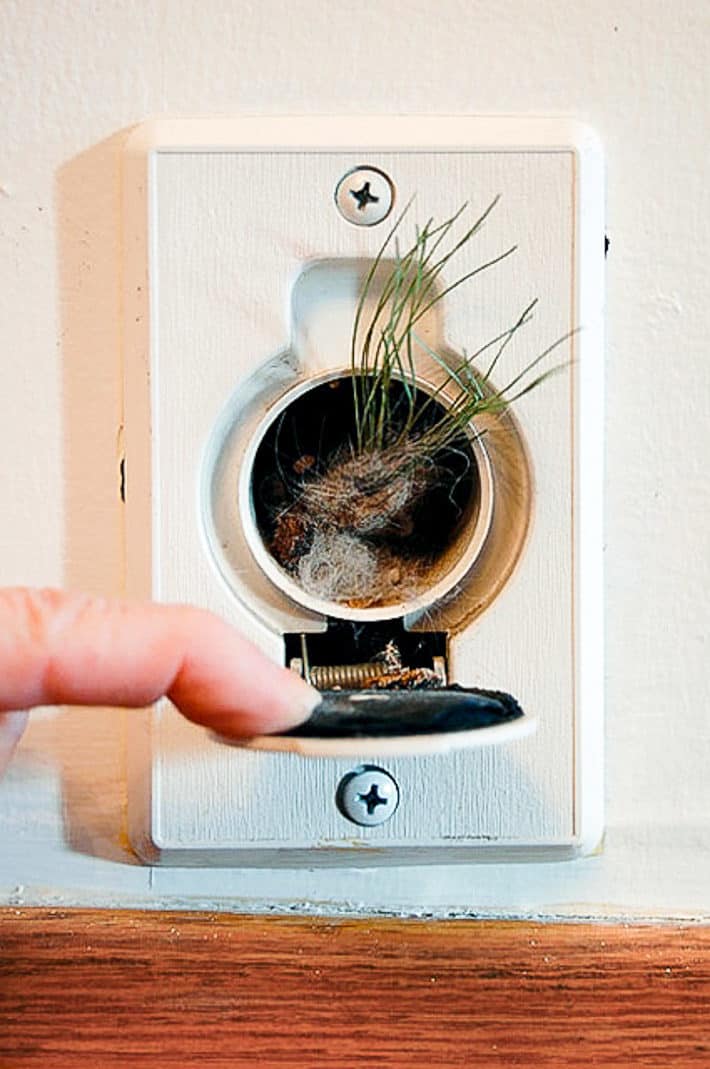 I pulled that out too and figured I was done, but decided to give her one extra suck.  And this happened ... 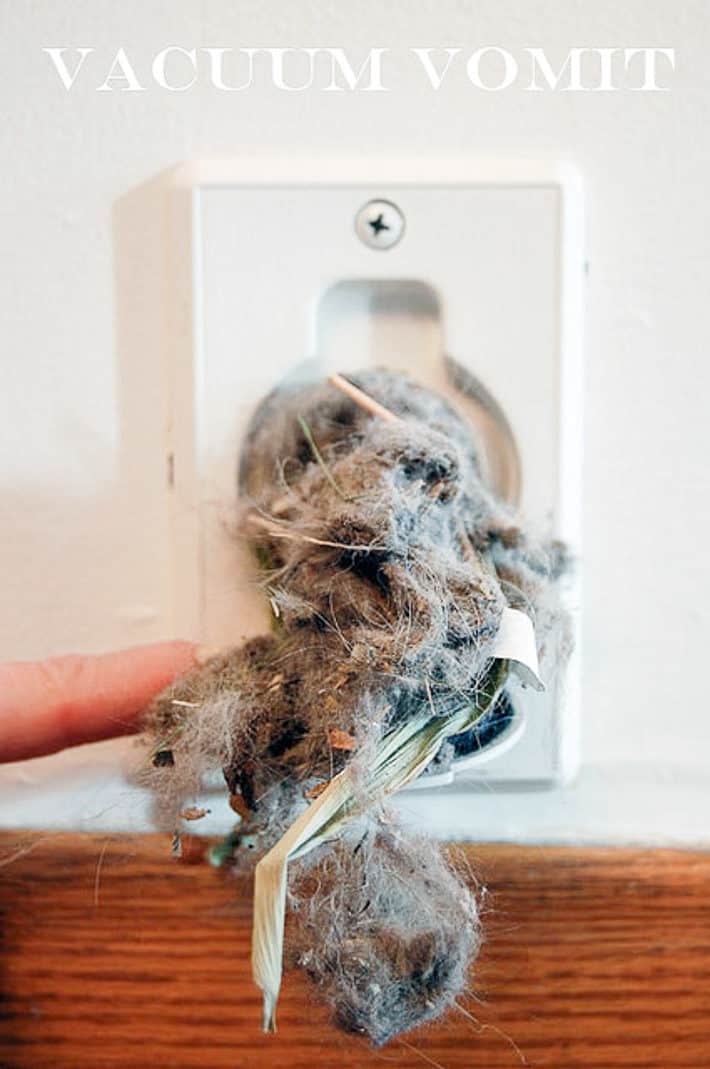 It may have been the most exciting thing that's ever happened to me.

And yes.  That is an After Eight wrapper.

Also in that pile were some twist ties, pine needles, little bits of bark, unidentifiable gross stuff and a sequin. 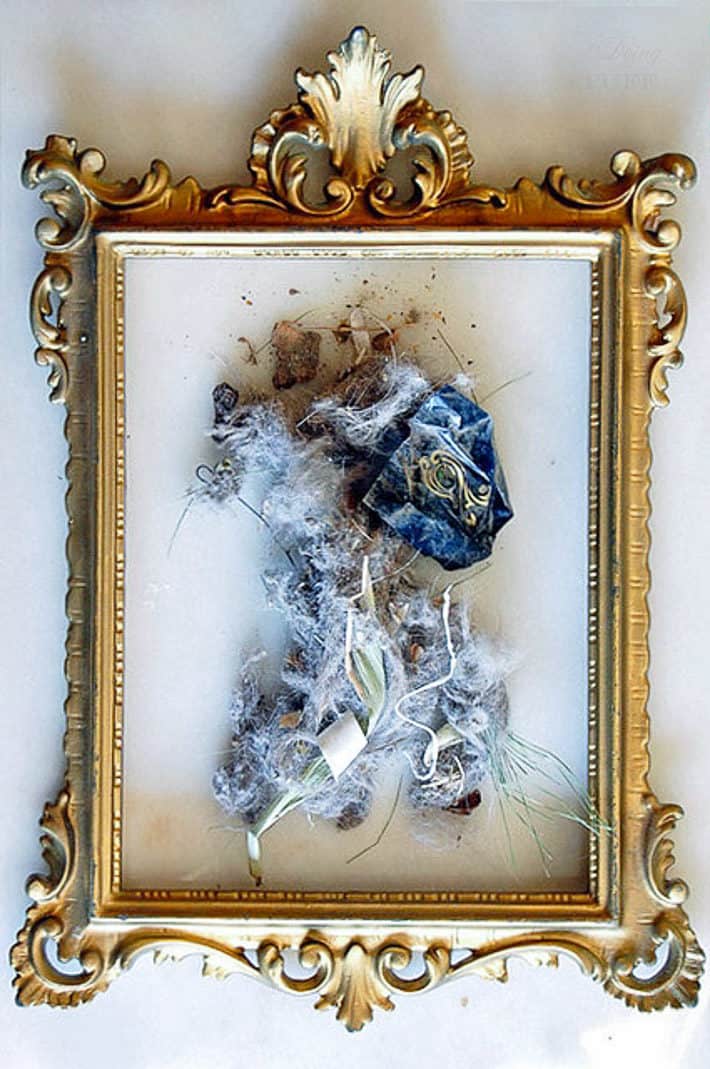 With about 5 minutes of work (including dragging the car vacuum out of the shed) I  got the vacuum fixed, free of charge and immediately.  Had I called someone my best guess is it would have cost between $100 and $150 to have someone come out and diagnose the problem and fix it.  This way, I got the thrill of seeing the actual blockage and I didn't have to listen to some repairman pretend like this was a way bigger job than it was.

The absolute BEST part of all of this was I had enough cat hair to knit those little mice some suits, plus the sequin was perfect for their Liberace tribute.

All in all.  The day I unclogged my central vacuum sucked.  And I couldn't have been happier about it. 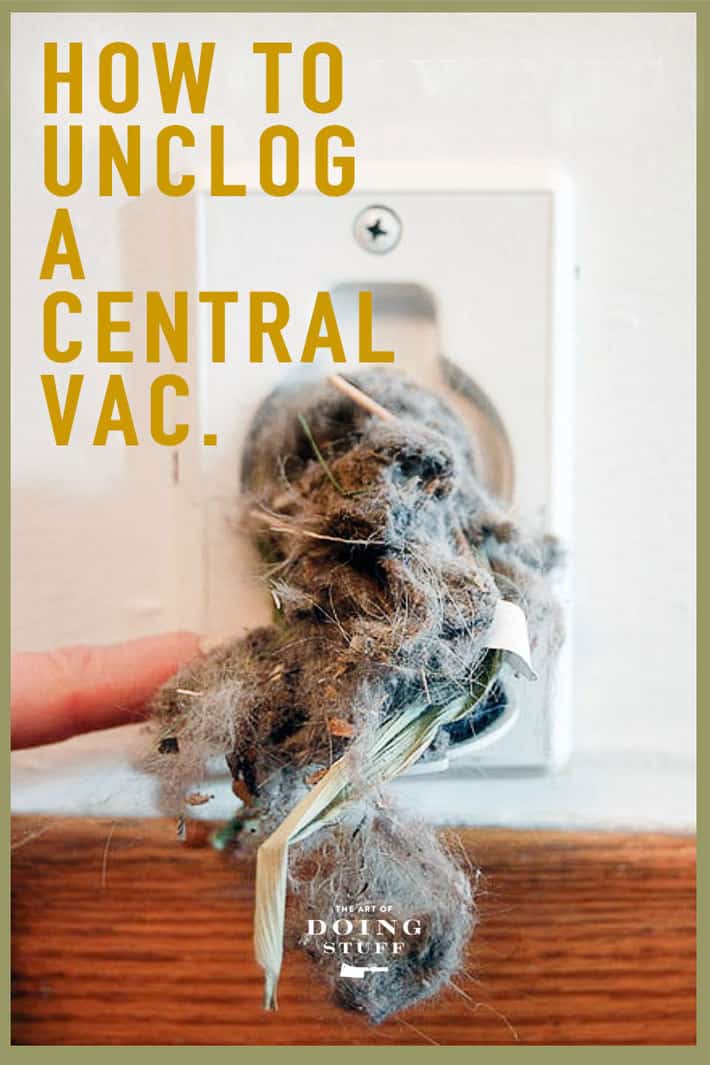