Weeds can completely take over your garden choking out the things you want to preserve like your vegetables, perennials, annuals and sanity. Here's how to get rid of weeds.

I'm going to start off with a controversial statement about weeding: you're never going to be able to get rid of them. With weeds, all you can hope to do is keep them under control. Like a patch of eczema or a toddler coming down from a birthday party high.

There are three ways to go about getting rid of these garden goons: killing, pulling and preventing them from growing in the first place.

If you were a grazing animal on the African plains weeding would be easy and dinner. But you are not and it is not.

There are a ton of home remedies online to kill weeds naturally. Some work, some don't. These two do:

Boiling water is a method I use for weed removal that does work, but it needs to be repeated over and over to kill weeds that have taproots.

When mixed, these ingredients are actually a powerful weed killer with the vinegar and salt drying out the weed and the dish soap creating enough surface tension to the liquid to allow the mixture to absorb into the weed as opposed to sitting on top and sliding off.

Biochemical weed killers use chemicals to target and kill weeds usually after only one application.

Before you dismiss the big bad chemicals, some weeds are more dangerous to you than the chemicals are. Coming into contact with Giant hogweed, pokeweed or deadly nightshade for example will really have you yearning for that time you bumped into that joke of a weed, poison ivy.

KILL EM ALL. That's what these herbicides do. Non selectives kill everything they come into contact with; weeds, grass, perennials and more.

Even the most stubborn weeds pull out easily from loose soil. If you don't have loose/sandy soil your best advantage over the weed is to wet the soil.

Keep a bucket nearby to throw weeds into. Grab the weed at the point where it touches the soil and pull. There's nothing else to explain.

Most of them are useless or labour intensive gadgets but you don't know which is which until you try them out. These 2 weeding tools are all you need. One for pulling weeds with taproots, and one to remove small annual weeds:

For big carpets of weeds that are 4" high or more (like I see on my vegetable garden beds every spring) I find the fastest way to get rid of them when they're at that point is to pull them by hand in clumps. Sorry for the bad news. There's no magic way.

The only way to go from this to that ... is work of some kind.

Bare soil is a weed's best friend. They're lovers. It gives them all the sunshine, water and space they need to take over. Planting something - anything - will diminish spring weeds.

Plant your cover crop for weed suppression in the fall. Typical cover crops used to prevent weeds are radish, mustard, collards and rye. However, remember, if you plan to plant in that bed you're going to have to cut back/remove that entire cover crop before planting.

So basically ... you'll have to weed.

Choose cover crops for bare land that will be unused for a year or more unless you own a combine and a farmer plates on your vehicle.

Regular landscape fabric is useless, as anyone who has ever tried it knows.

Agricultural landscape fabric on the other hand is very effective at blocking out weeds and will last for years without degrading. I use massive rolls but the fabric I linked to above is very reasonably sized at 4' x 10'. Perfect for garden beds. Just cover the beds with it in the fall and remove it before planting to prevent weeds from sprouting.

It's also a superb option for paths.

Mulching garden beds or pathways works quite well. The odd weed will get through but the majority of them will stay in the dark.

Mulching looks nice, but it needs to be redone every couple of years because it decomposes fairly quickly (which is great for your soil.)

No dig gardening (where you don't turn the soil or till it) IS a bit of a magical solution to preventing weeds. How? By keeping weed seeds hidden underground, never to see the light of day.

Yes, you read that right. There are millions of weed seeds hiding in your soil (known as a seed bank) So when you dig your soil, you're exposing thousands of weed seeds to the sunshine it so craves.

The less you disturb the top layer of your soil, the fewer weeds you will have. Plain and simple.

What is a weed anyway??

People love to say that a weed is anything that grows where you don't want it to. But that's kind of a silly explanation don't you think?

Sure it's technically true but to be more specific a weed is something that thrives in poor soil and is aggressive. It has the ability to multiply and take over a garden at an alarming rate either due to barfing weed seeds everywhere or through creepy runner roots.

If for instance, a peony was popping up between my bricks instead of a dandelion I wouldn't refer to it as a weed even though I don't want it there. Why? Because it isn't a weed.

Weeds actually do a great job of conditioning and protecting your soil so don't use up all your pent up hatred on them. Save some of that hatred for pests like vine borers or wine coolers.

Leaving your vegetable garden to cover itself in annual weeds in the fall once harvesting is done can actually improve your garden. They act as a cover crop.

Weeds protect the soil, creating a much richer, moist and loose soil to work with in the spring.

The TRICK is to pull the weeds in the spring before they set seed and start the cycle all over again.

What to do with weeds from the garden


Compost them. The easiest way to do this is to just throw all your weeds in one place to create a pile. You don't need a compost bin to compost. Hot composting is the best option for composting weeds because it will kill any weed seeds.

Will a weed grow back?


Either keep a 5 gallon bucket beside you to throw them in or leave them on the ground and rake them into a pile at the end of the chore.

I believe you are now sufficiently armed to weed like a wildebeest. Good luck. 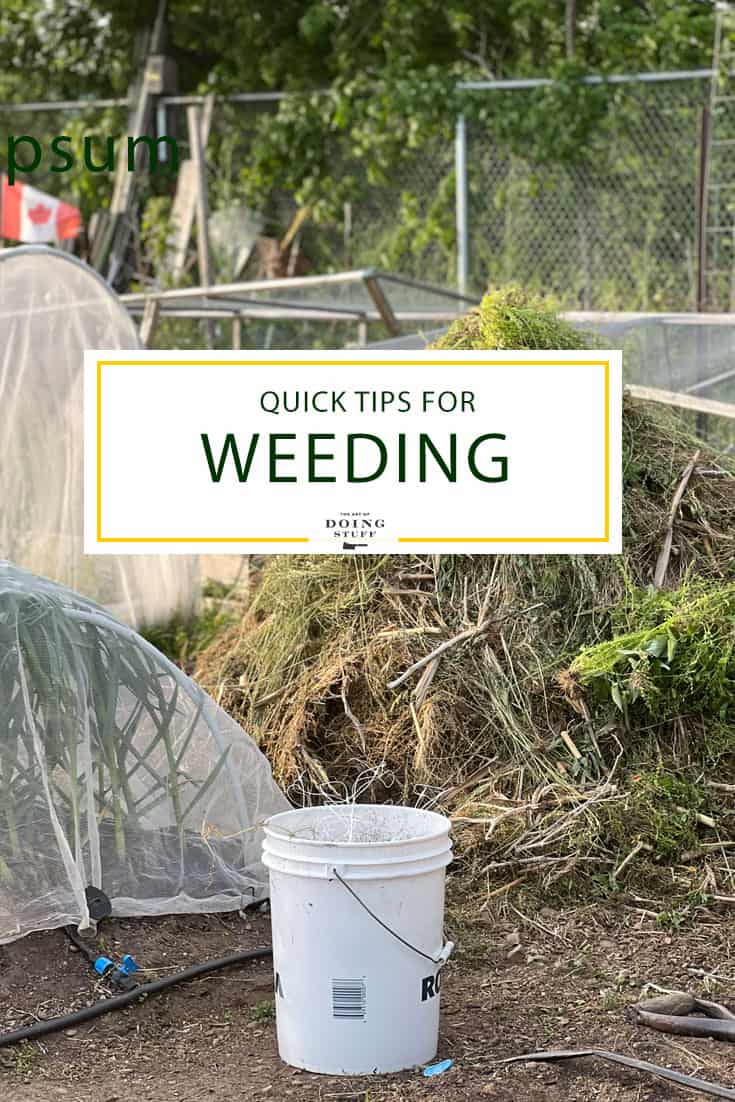