I learned some things this week. For example, I now know that eating too much yogurt can result in an unladylike digestive tract. I also learned I'm finally going to need to buy a "do not eat pickled eggs" sign for inside of my car. And a toe update! 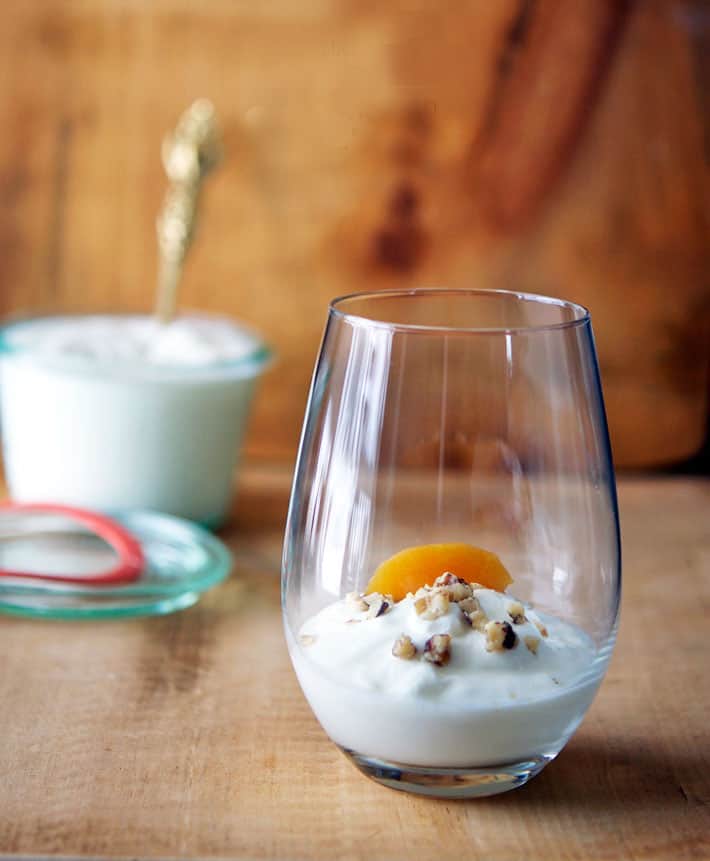 I made a lot of yogurt last week.  You read the post about it, you knew I did it, and yet none of you. Not ONE of you thought to email me and tell me not to eat an entire gallon of yogurt myself in one week.

I'm ashamed to even know you.

Who among you has an ounce of compassion? I think none.

For if any of you had the slightest bit of it you would have let me know that eating a gallon of yogurt (as I was obviously going to do, having made it) would send my digestive tract into overdrive and my anus into leaf blower mode.

I'm so sorry to have to tell you that, but - I mean, it's kind of your fault soooooo. Honestly you should be thankful that I'm showing quite a bit of restraint in my description of the ordeal.

We've established that I was not feeling well, but I still had things to do. One of which was to run to the local feed store to pick up maple syrup supplies. Betty tagged along because as you may know, Betty will say yes to going anywhere or doing anything.

She is not particularly interested in farm related stores (she's more of a knitting store or Coach woman) but it was a drive in the car, so she came along. Maybe something exciting would happen she imagined. Like a police chase or Ferrari spotting.

As it turns out, the most excitement she had during the drive was when we had to go through not one, not two, but THREE death defying roundabouts.

We got to the store without incident. This particular store carries pretty much any and every farming, outdoorsy, homesteady kind of thing there is.

Which is how my mother ended up with a big jar of pickled eggs.  As we were in the car about to leave the parking lot to head home, I realized that I had forgotten to check for something in the store and left her in my car while I ran back.

I never thought to tell her not to eat pickled eggs in my car. I know better now.

When I got back and opened up the car door a cloud of eggy sulphur stench drifted out. And there she sat. Betty. An opened jar in her lap, vinegar dripping from her fingers and egg ... literally on her face.

It took her seconds to inhale the egg but 4 oldies songs, a jazz classic and 3 roundabouts with the windows down to thin out the pickled egg fog.

I'm smashing this post out at 10:30 on Saturday night because I spent most of the day cleaning up my backyard and laying out my latest maple syrup evaporator incarnation.

Because this is the first weekend I'll be boiling sap this season to make my own maple syrup. 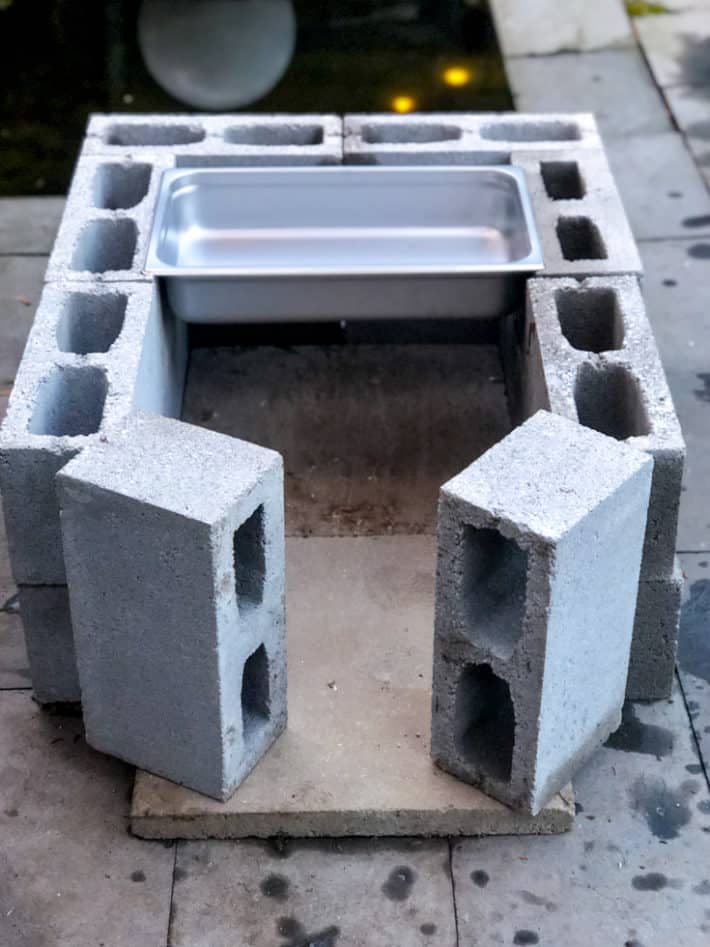 You might remember that for the past couple of years I've been using my DIY rocket stove for boiling sap outside.

This year I wanted to see if I could speed up the evaporation process (that's where you boil and boil and boil the sap until you think if this stupid stuff doesn't turn into maple syrup soon you'll do something drastic - like buy a bottle of syrup.) 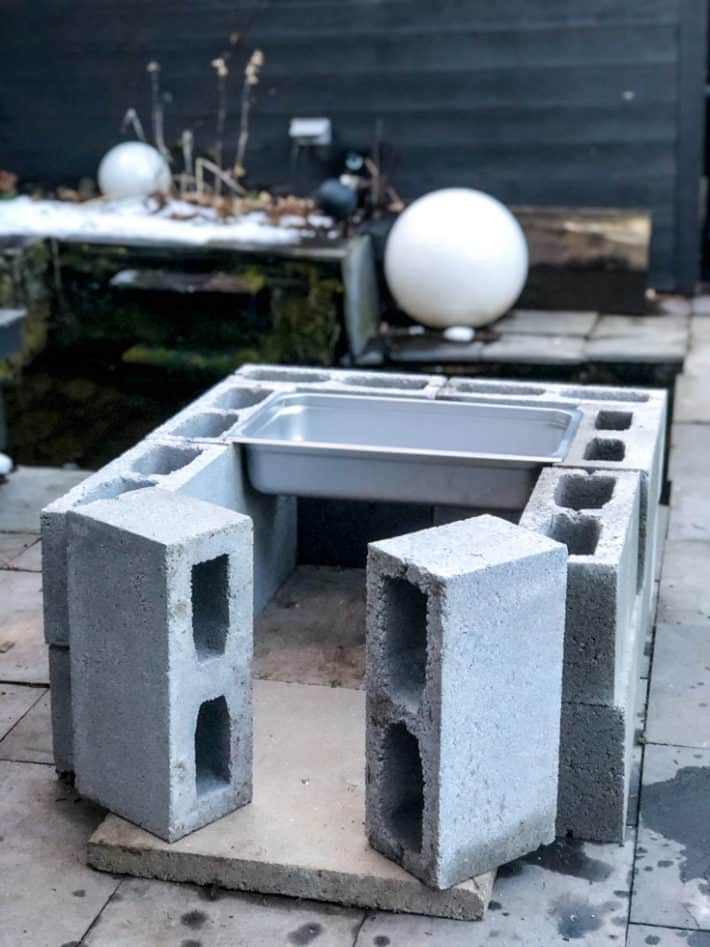 So after a bit of searching on the Internet I found this setup of cinder blocks and patio stones.

Laid on top are standard, full sized steam pans which you can get cheap at restaurant supply stores or on Amazon.

Sunday morning I'll wake up, make a coffee and go outside to start a fire in it and hope it boils sap. 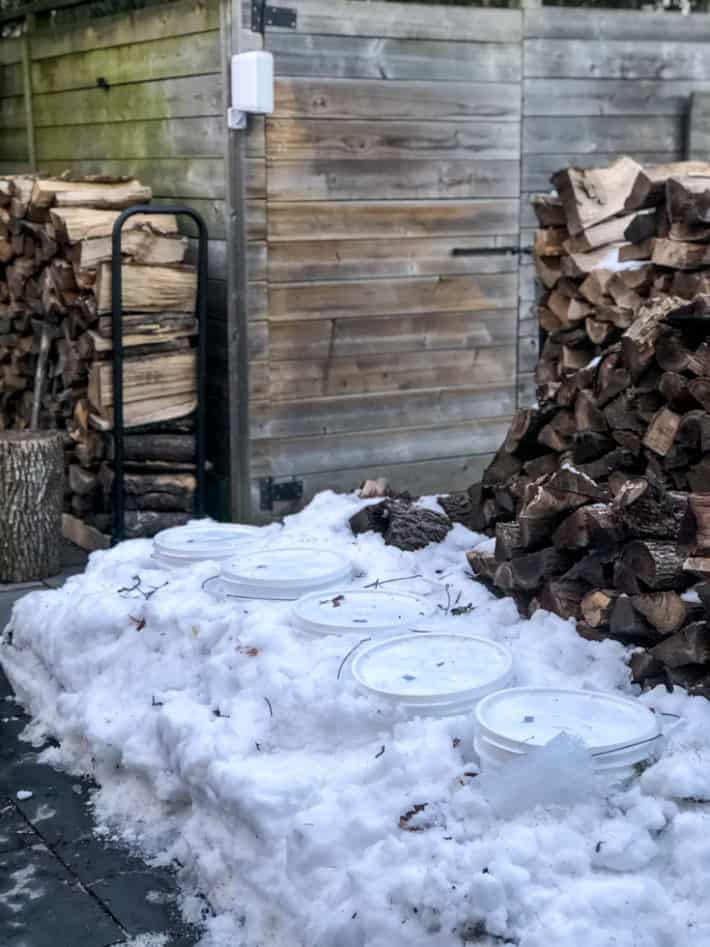 Sap which is staying cold (remember I told you, you have to think of sap like milk - perishable. It looks like water but isn't) inside this snowbank I formed in my backyard with every bit of snow I could shovel up.

Each 19 litre (5 gallon) bucket is filled with sap, giving me 26 gallons of sap. That's 400 cups of sap. It takes around 42 cups of sap to make 1 cup of syrup.  Which means .... I should get an amount of syrup that is too difficult to determine. If you are a Mensa level mathematician who has won math awards feel free to work it out.

It might be 10 cups but I don't trust myself with anything to do with math unless it involves cash money. 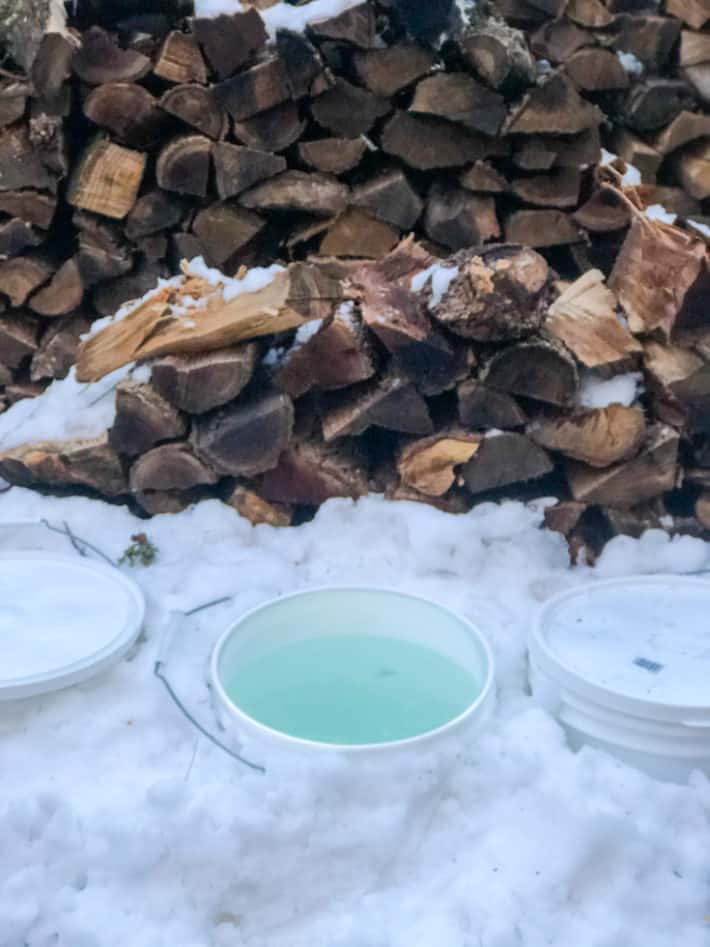 Although I never ever get as much syrup as I'm supposed to based on the amount of sap I have, partly because I tend overboil a tiny bit and because the trees I collect out of only have a Brix level of 2.5%. That means nothing to you if you aren't a maplehead (I just made that term up but it sounds way classier than a cheesehead in my opinion) but it's the amount of sugar in sap.

The sap you see above does indeed look blue in real life. Not as blue as it's showing up as in the photo here, but definitely blue.

I made another DELICIOUS recipe from Gayle of My Family Food Life this weekend. Tonight actually.

Tostadas with a topping of avocado cream, sautéed lentils, onions and pablano peppers. They took 30 minutes and that includes making the delicious avocado cream out of an avocado, cashews, lemon juice and a couple of other things whizzed up in a blender. 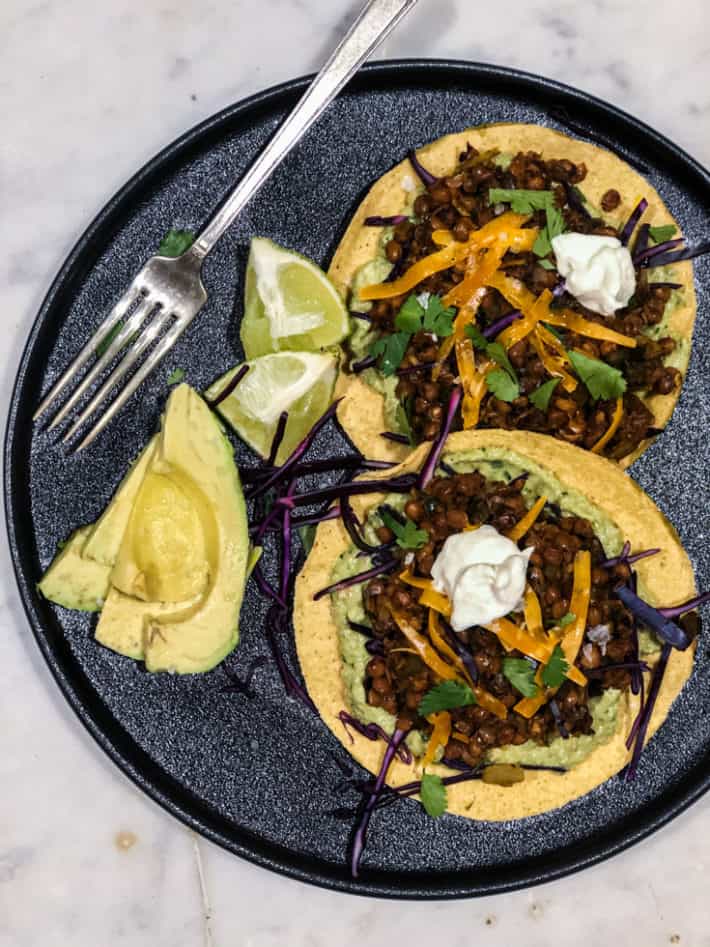 That's my dinner right there which I ate a few hours ago and am already looking forward to the leftovers tomorrow. 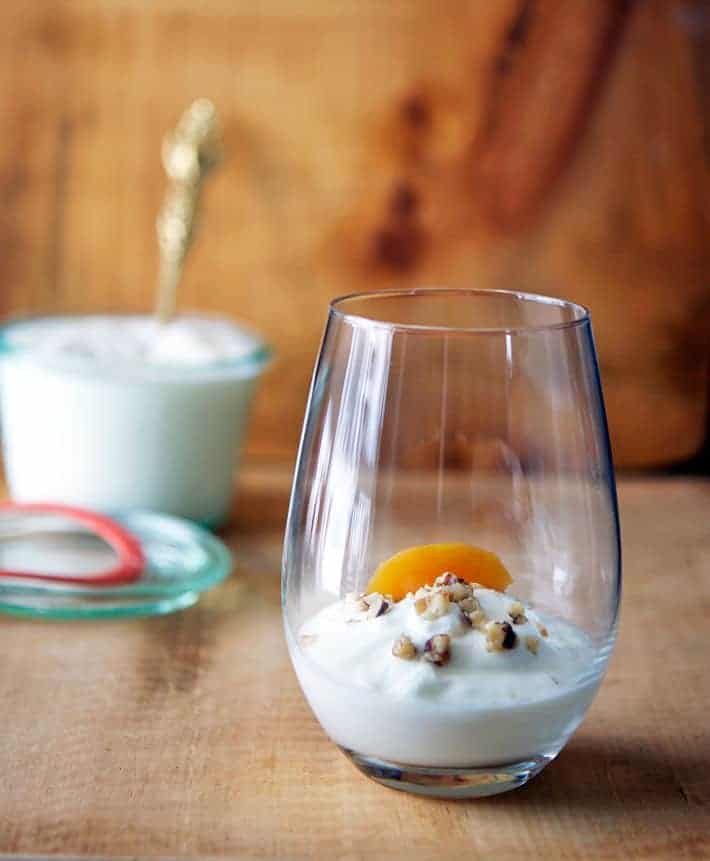 How to Make Yogurt at Home 3 Different Ways.

In case you missed it, it was rewriting THIS post that led to me determine there is such a thing as eathing TOO much yogurt. That amount is a gallon by the way.

This is that rocket stove. It works great, but still takes longer to boil sap than I'd like. Hence the upgrade to the cinder block experiment this year. 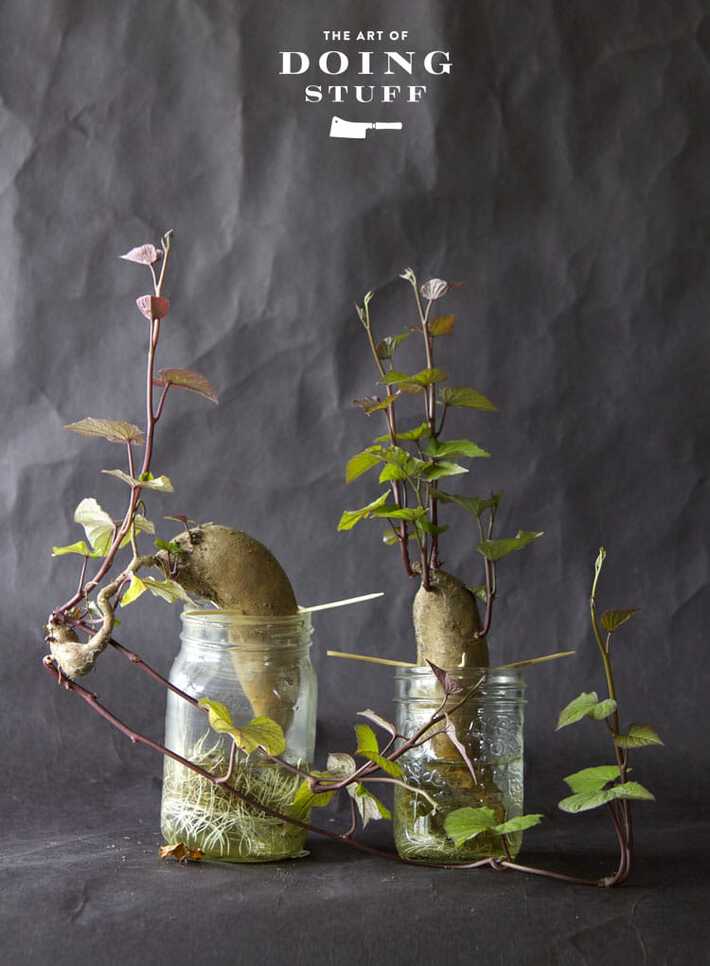 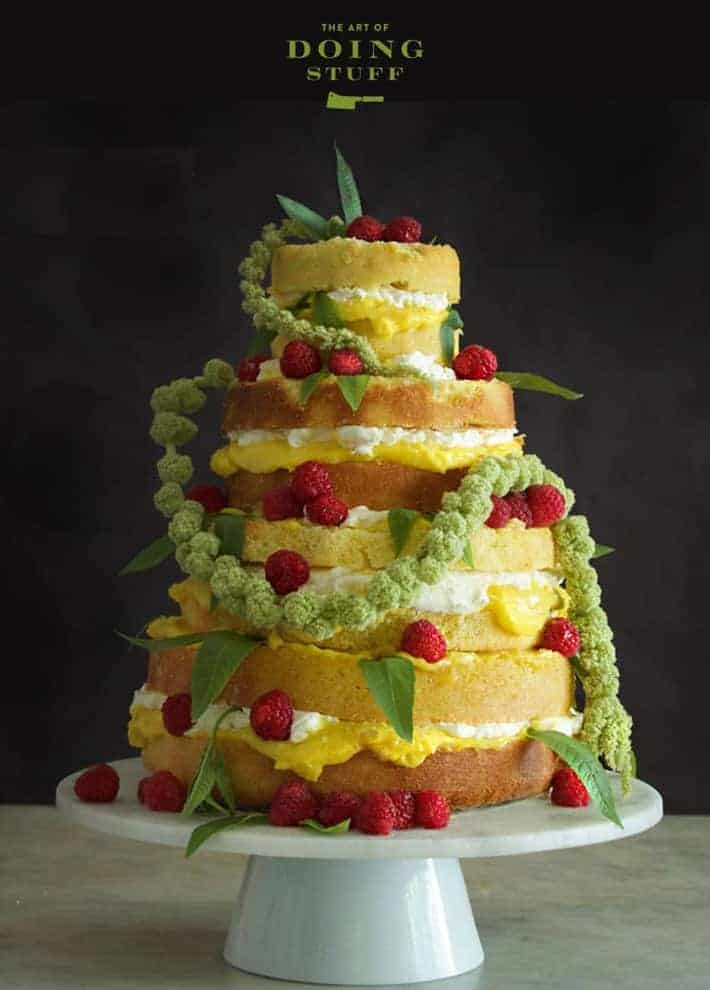 Amaranth is ONE of the flowers I grow every year. It's SO versatile in arrangements, plus it's edible, PLUS it looks like this when I drape it over a dessert. Lemon curd, verbena, naked cake. Anyone have a birthday coming up so I can make this for you? (I just realized it'll be another 6 months or so until I have amaranth ready to decorate it, so July birthdays are good, lol) 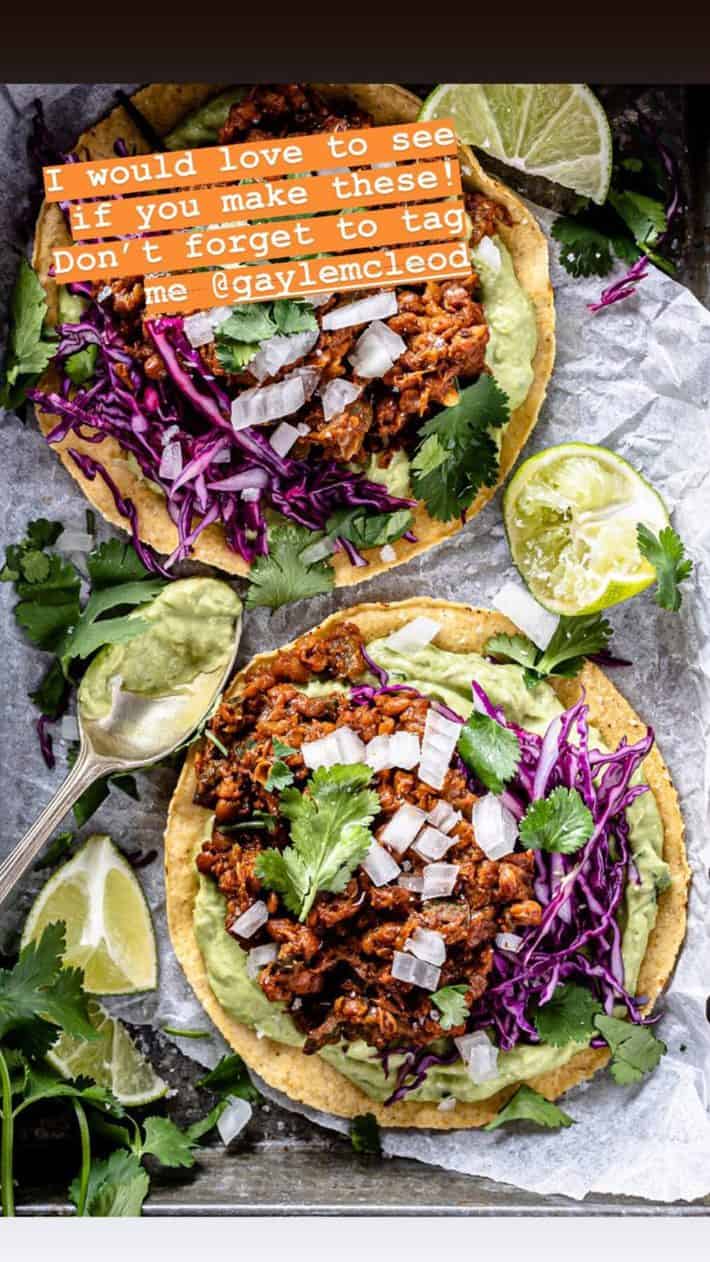 Again, the recipe is on her Instagram page. Most of her recipes eventually make it onto her website, so keep checking there.

Have a good remainder of your weekend! Phew at 11:06, I have just made it in under the wire for my midnight publishing time.

update: in my rush to publish I forgot to include my toe update, so here it is - my toe is fine! Perfectly perfect.  I just kept pushing the skin back (ouch) and moisturizing. If you missed it, here's when I decided to do home  surgery on my toe.

REMINDER it's "Spring Forward" time so don't forget to set your clocks forward tonight if you're reading this late Saturday evening and  living in 1982. Everyone else can just let their iPhones and tablets autoupdate themselves.