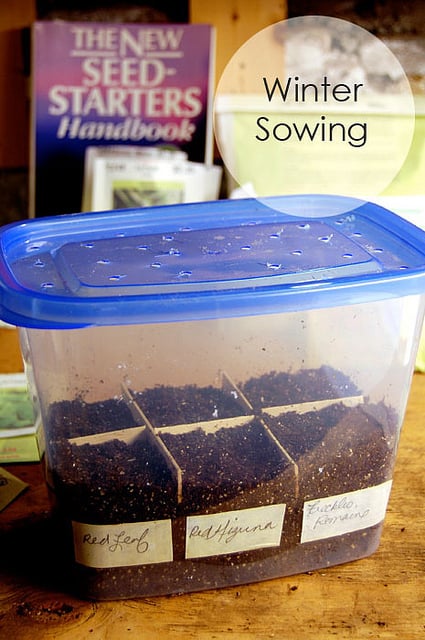 As a gardener there are very few things I won't try as a way to extend my growing season.  I've tried cold frames (unsuccessfully this year, but that was entirely my fault combined with a particularly pissy Mother Nature this winter), succession planting and pretending I lived in California.  The pretending worked better than succession planting and only slightly worse than the cold frames.

I've also grown sprouts and baby greens throughout the winter in order to get my growing fix and I always, always try to start my seeds indoors too early, just because I want to get going.  I'm like the kid sitting at the front door holding my suitcase and wearing my swimming goggles 3 days before the actual vacation starts.

So last year when a reader mentioned winter sowing I made a mental note to remember to try it.  3.4 seconds and a butterfly flying past later I'd forgotten all about it.

Then earlier this winter another reader reminded me about winter sowing.  This time I remembered, I just didn't have time to get around to it until technically it was too late.

Winter sowing you see, involves sowing your seeds in a translucent plastic container and throwing them outside in January.  JANUARY.  The seeds then fend for themselves, and when conditions are perfect they sprout. The translucent container acts as a mini hot house. No guess work, no grow lights, no need to water because Mother Nature (whose pissiness comes in handy sometimes) takes care of that for you.

Since winter has lasted approximately 17 months longer than it normally would this year, I've taken a stab at winter sowing just to get a feel for it. If it works out well, then next year I may switch over from starting my seedlings under grow lights to starting them outdoors.   If I remember.

1.  Find some PBA free containers.  I got these at the Dollar Store.  Which means they're either actually PBA free, or they just have a sticker on them saying  so. 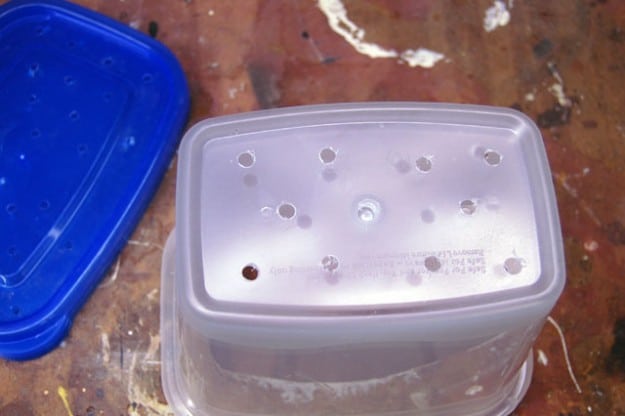 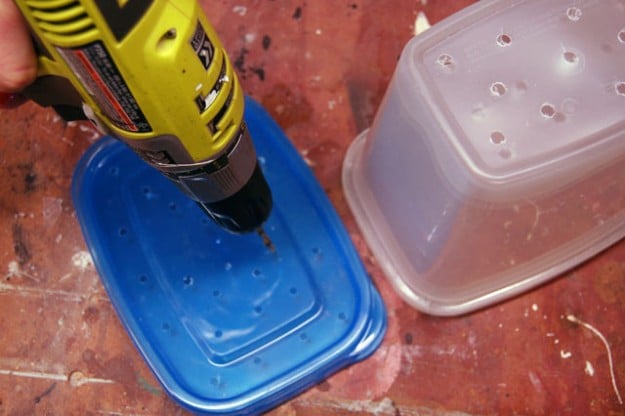 3.  You want containers that allow you to have at least 3-4 inches of soil in them, and another 4" or so of head space so the plant has somewhere to grow.  Fill the containers with soil then pick the seeds you want to grow.  I've chosen to go with plants that are tolerant of cold like lettuces, kale, and even beets.  Yes.  Beets can be started and then transplanted.  I have always had great success transplanting beets even though all seed packets and "authorities" say it can't be done.  I'm going to try a tray of tomatoes as well, but will also grow another bunch of them under lights.  I'm a bit  nervous about using this technique with plants that prefer warm soil and warm weather like tomatoes and peppers.  But I'll give it a shot. What the hell. 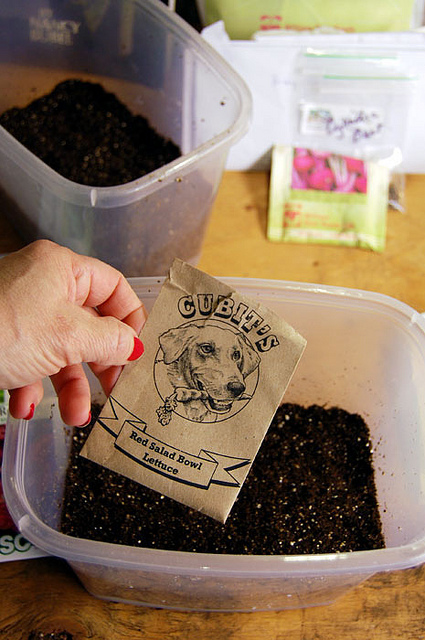 4.  Scatter your seeds over your soil.  I've also made partitions out of popsicle sticks so I can plant different varieties of things in one container.

5.  Instead of scattering (although I've done that here) you can also just plant a few seeds in each section and then thin them to the one strongest seedling later on.  Scattering works well for growing spring greens or other things you want to plant in a mass. 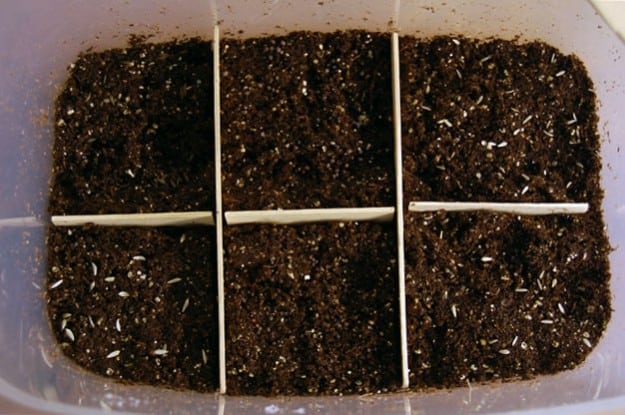 6.  Winter Sowing and sectioning can also be used on a larger scale, like in this Tupperware bin. 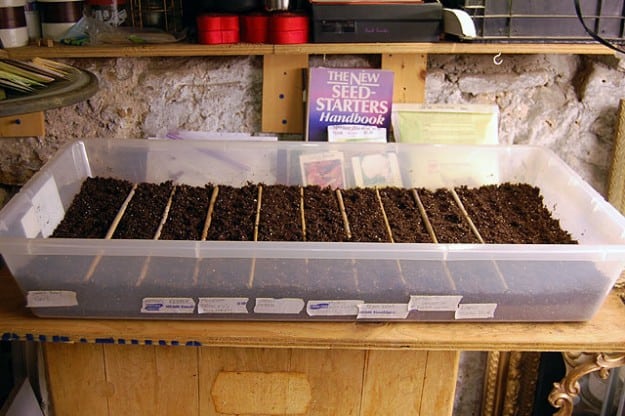 7. Once your seeds have been planted, make sure you label your container so you know what's in it. I just used masking tape, then covered it with a layer of packing tape. Hopefully it'll brave the elements. 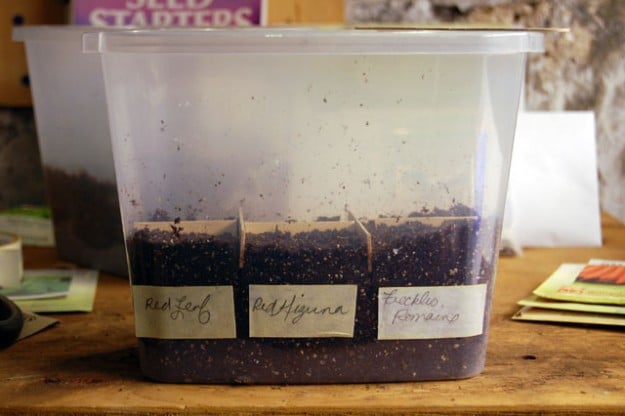 These elements to be precise. 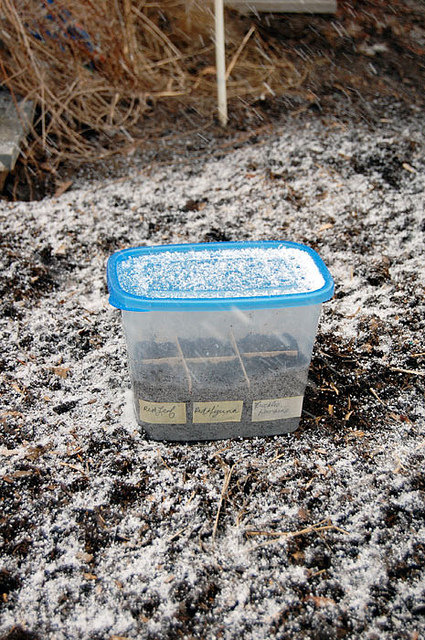 Like I said earlier Mother Nature has been less than kind this year. In a bit of a snit, if you will. With this being the coldest, longest winter in memory I can tell you I don't think she's going through menopause. Bad breakup maybe?

Once your seedlings have grown and the weather has warmed up, just remove the lid from your containers so they plants don't cook inside. It'll get pretty warm in there. If a cold snap threatens put the lid back on before the sun goes down. 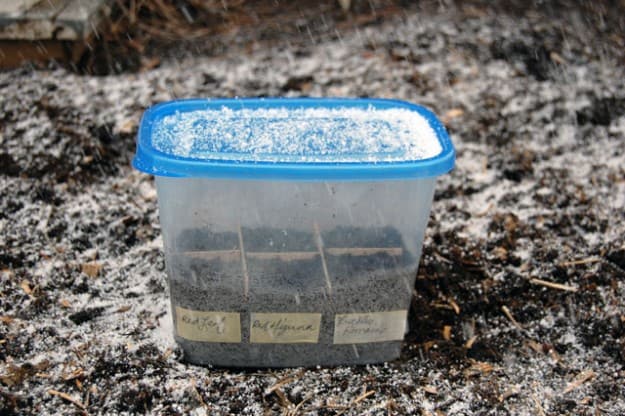 Regardless, her anger has allowed me a bit more leeway in my Winter Sowing experiment which is fine by me. And hopefully it'll be fine by my lettuce. I have a feeling the tomatoes are gonna revolt.
Most people seem to use milk jugs, but milk comes in cartons or bags 'round these parts so I had to use something else.

Winter sowers claim the benefits include not having to water, (the snow lands on the top of the container, melts eventually and waters the seeds inside) not having to pay for electricity to run your grow lights, and healthier, sturdier plants that don't need to be hardened off since they're already outside braving the elements.

Here's an update on how the winter sowing went.