Why You Need an Automatic Chicken Coop Door.

Listen to me right now.  If you’re new (or old school) to chickens you NEED an automatic chicken coop door.  It’ll save their lives and maybe more importantly – your ability to sleep in past 6 a.m. 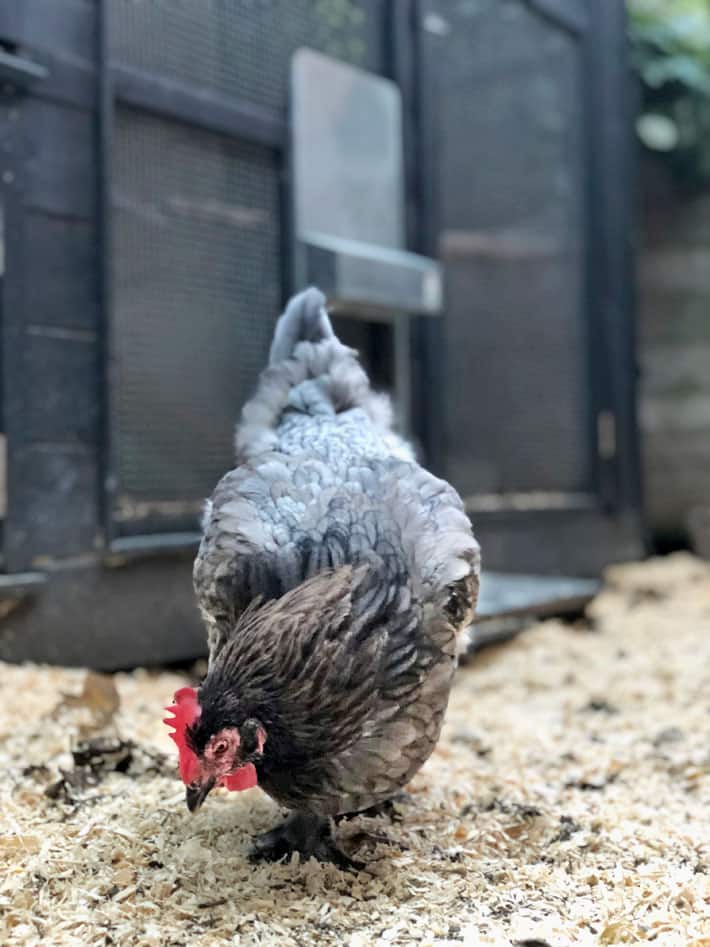 The other night as I was staring into the refrigerator willing it’s contents to change into stacks of leftover pizza, I heard a bit of action coming from the chicken coop.  Being 11 o’clock at night, and chickens notoriously early-to-bedders I knew what I was hearing wasn’t chickens.

Shoving my feet into my chicken coop shoes, I shuffled out the back door and looked around the corner into the coop run.  There, hanging by their nails from the hardware cloth enclosing the coop was a family of raccoons.  Some were climbing up the cloth and others were pulling with all their might to try and get it off. I was not the only one looking for a snack that night.

I threw pea gravel at them.

I went back inside.  The raccoons would give up soon enough.  The hardware cloth is screwed in every few inches and even though I’m always a bit worried, there’s very little chance a raccoon is going to be able to rip it off.  Unless the raccoon did Crossfit obviously. 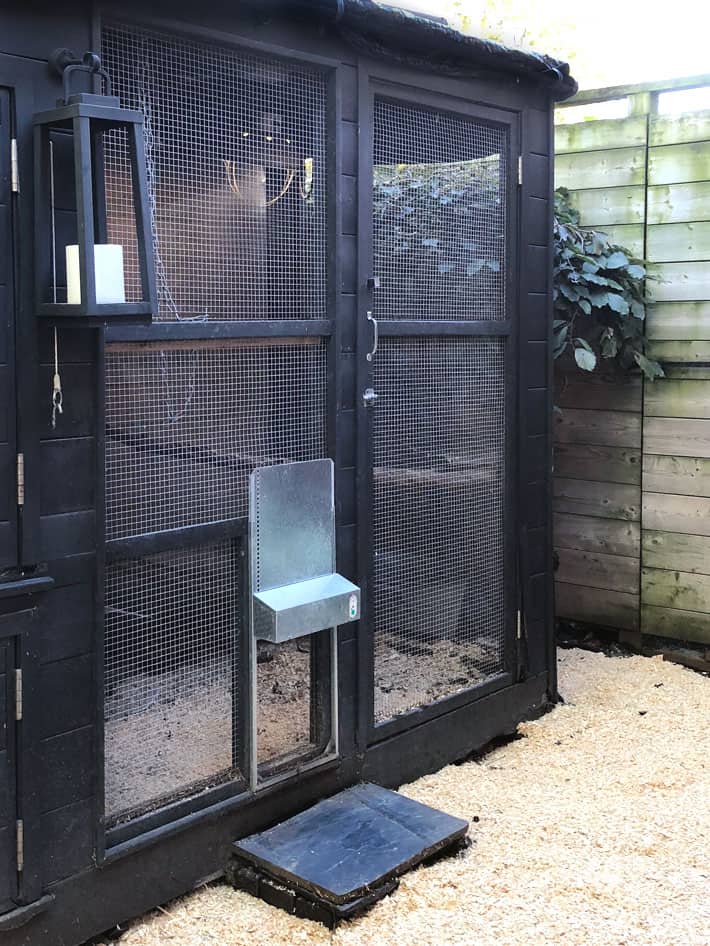 10 years into owning chickens and I have never lost a single one to a predator.  I’ve lost them to egg yolk peritonitis, an embedded crop and Roosterism, but never to a predator.    Part of that is because of the 1/4″ hardware cloth the coop is enclosed in.  The other part is the automatic chicken coop door. 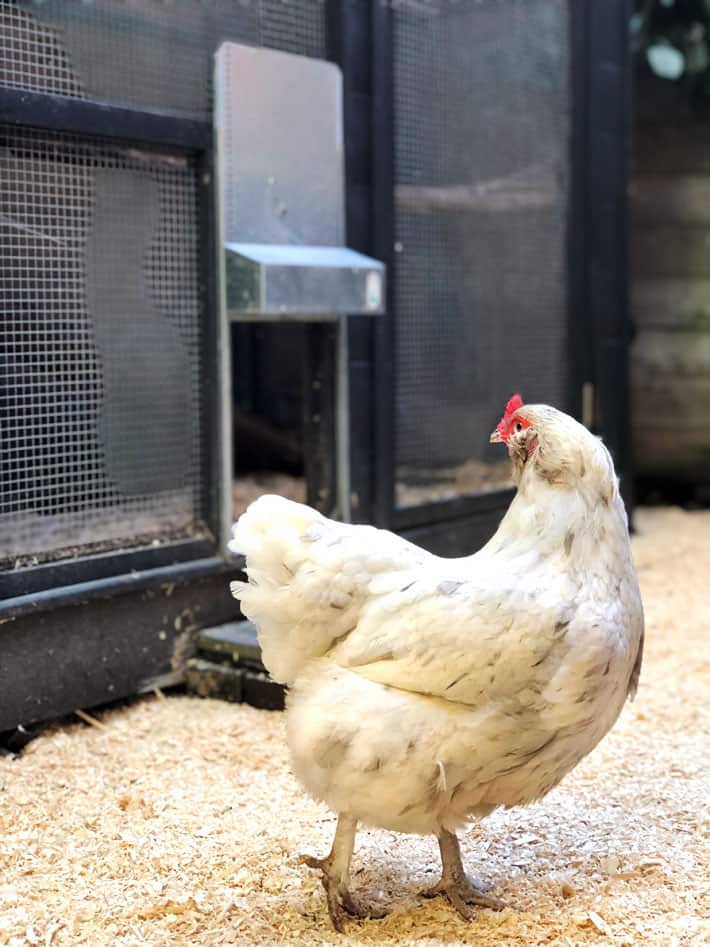 After a few go rounds with less than ideal chicken coop doors, I came across the Ador Coop door.  (NOT a sponsored post, I just think this really is the best automatic coop door)  I was really hesitant to buy it since it was made in America and I had to pay duty, tax, shipping costs to Canada and the exchange rate on it.

It was already expensive, but adding in all of those things made it even more so. But as far as automatic openers went it seemed like the best.

I cut some of my costs by self clearing it with UPS.  If you’re Canadian and you don’t know how to self clear an item with UPS you need to read this post immediately.  You can completely eliminate UPS’s stupid, made up broker and import fees just by picking up your package yourself from a depot. 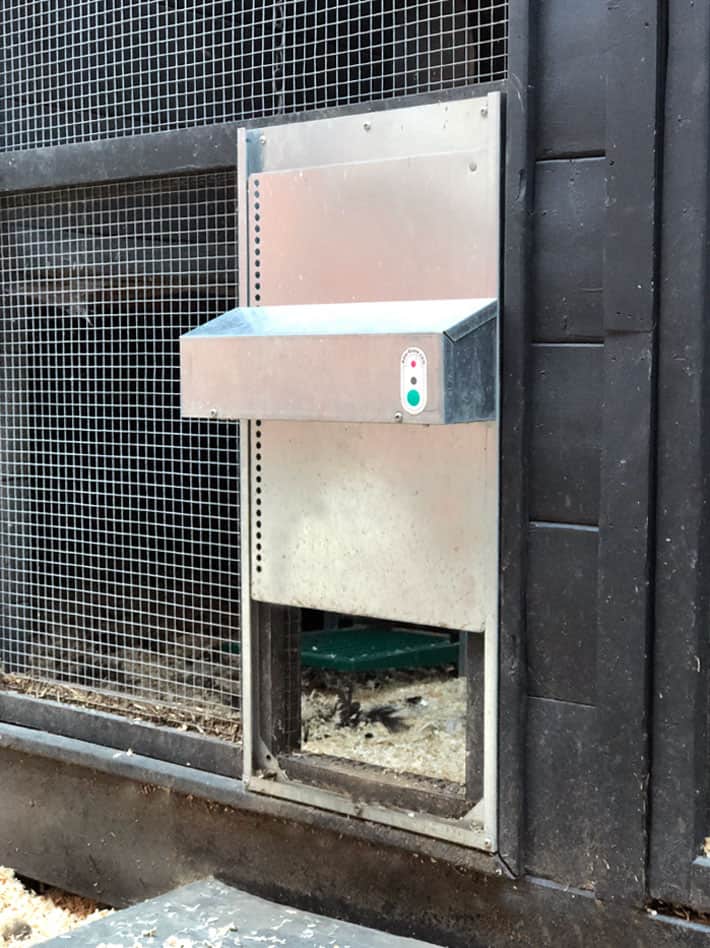 So why this door?  It’s handmade by a couple of guys in the States, not in some Chinese warehouse.  It’s entirely galvanized metal, no plastic and best of all – it requires no electricity.  It runs off of a 6 volt battery which lasts for over a year.  You can put this door in a chicken coop that’s in the middle of a field with no electricity in sight.  THIS is partly what makes this particular model so great. It’s run with battery power.

The battery is housed in the bump at the top of the coop door that looks a little like an awning.

This automatic chicken coop door has worked unfailingly for the past 5 years.

Since first installing it the price has gone up on the Ador but there are a slew of cheaper automatic chicken coop door openers on Amazon. I can’t guarantee how well they work or hold up because I haven’t used one other than  my Ador door.

Most chicken coops have a “pop door”, which is just a small door that only the chickens use. They’re about 12″ x 12″ and a few inches off of the ground. The reason your coop needs a pop door is so the chickens can come and go as they like without having to leave a big “man door” open all day.

How do automatic chicken doors work?

The motor is powered either by electricity, a battery or a solar panel. 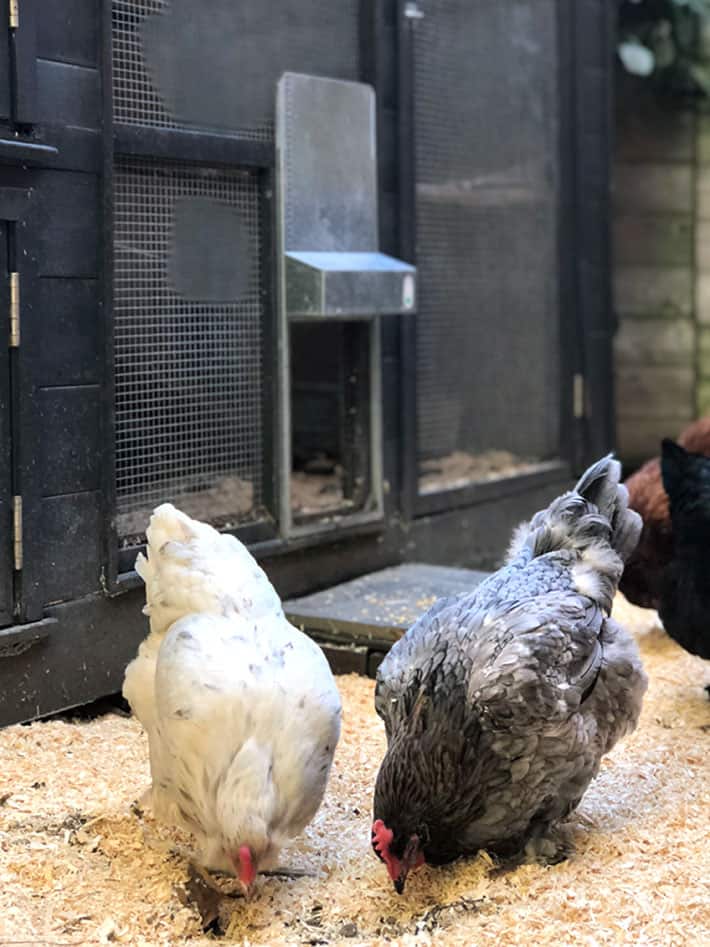 Mine can be adjusted slightly so I have it open just after sunrise and close right at dusk.  I never have to worry about getting home by dark to make sure the coop door is closed.

That used to be an ordeal.

Before installing the coop door, if I was going out during the day and knew I wouldn’t be home until after dark I’d either have to lock the chickens up in the coop  before I left, leaving them bored in the coop for the rest of the day, or I’d have to ask a neighbour to come over and close the coop door as soon as it got dark. 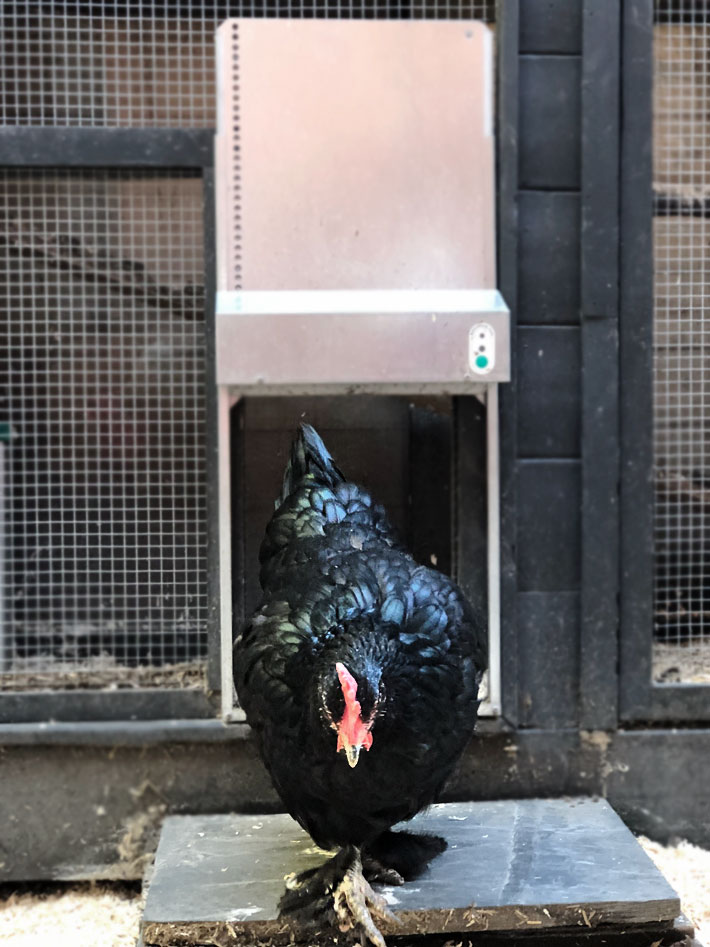 I can actually go on vacation for a couple of days now without needing anyone to let the chickens in or out! Not that I do that, but I could.  It’s a possibility. 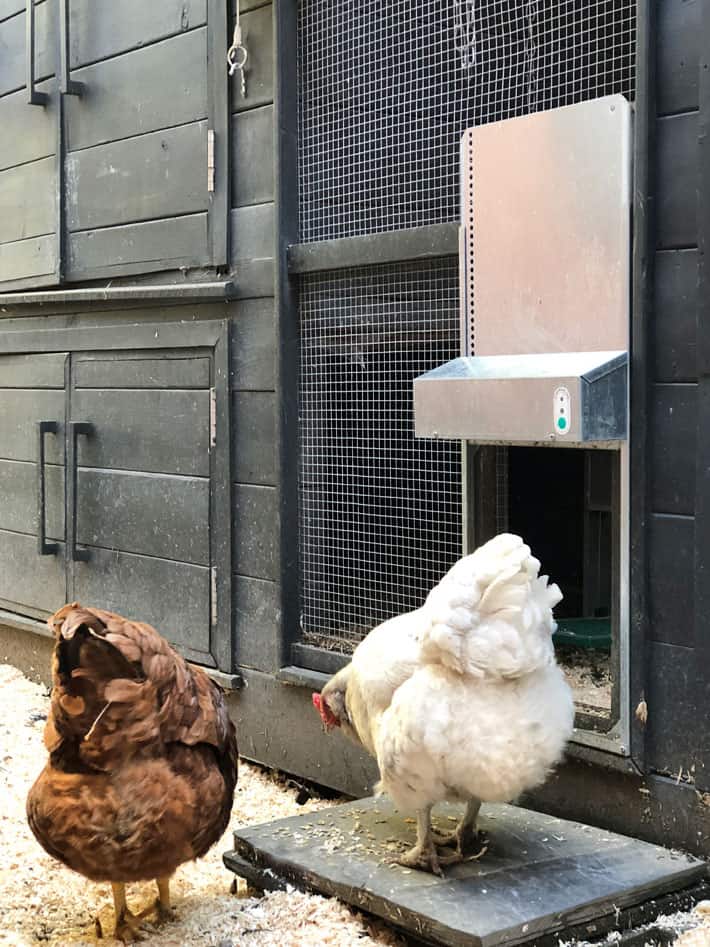 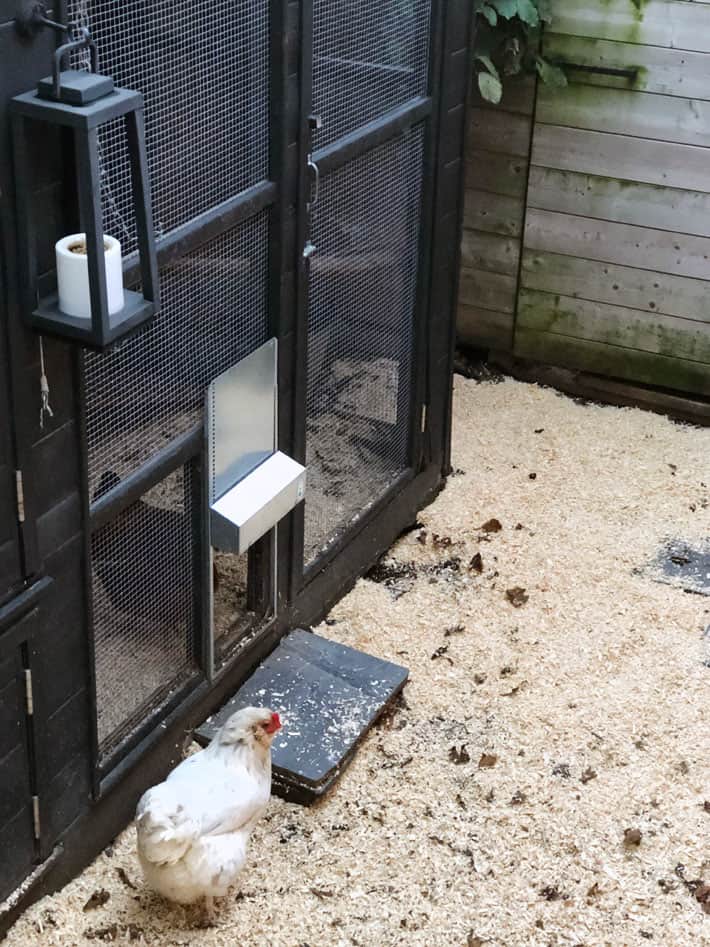 And as soon as the sun goes down, yup, the coop door goes down too.

Which is a good thing. I had no idea how much was going on out there during the night until I set up security cameras around my house. The coop run has its own camera and this summer alone I spotted raccoons, a groundhog, skunks, opossums and mice all wandering through the chicken run at 3 in the morning looking for an open restaurant.

This door will do more than anything to protect your chickens from predators.

Sorry you bandity little raccoons.  The kitchen is closed.  Until dawn. 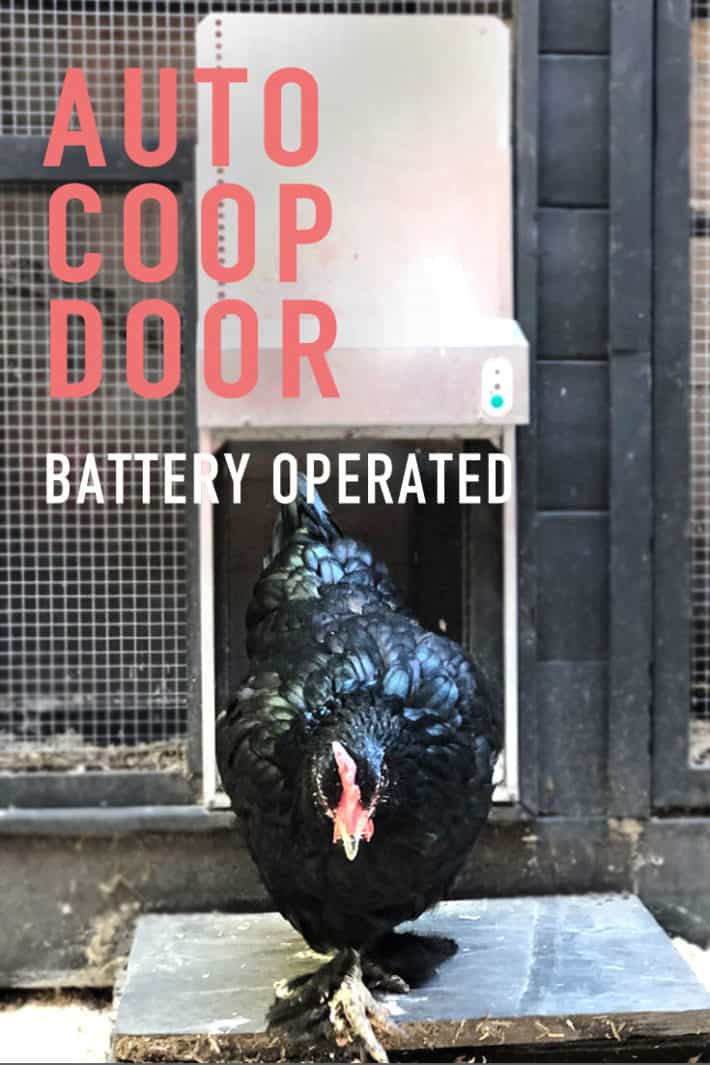