I went to an auction. I didn't need an old clock or even have anywhere to put an old clock.  Therefore - I bought an old clock.  Feel free to insert a rolling eye emoji here. Here's how that little escapade turned out. 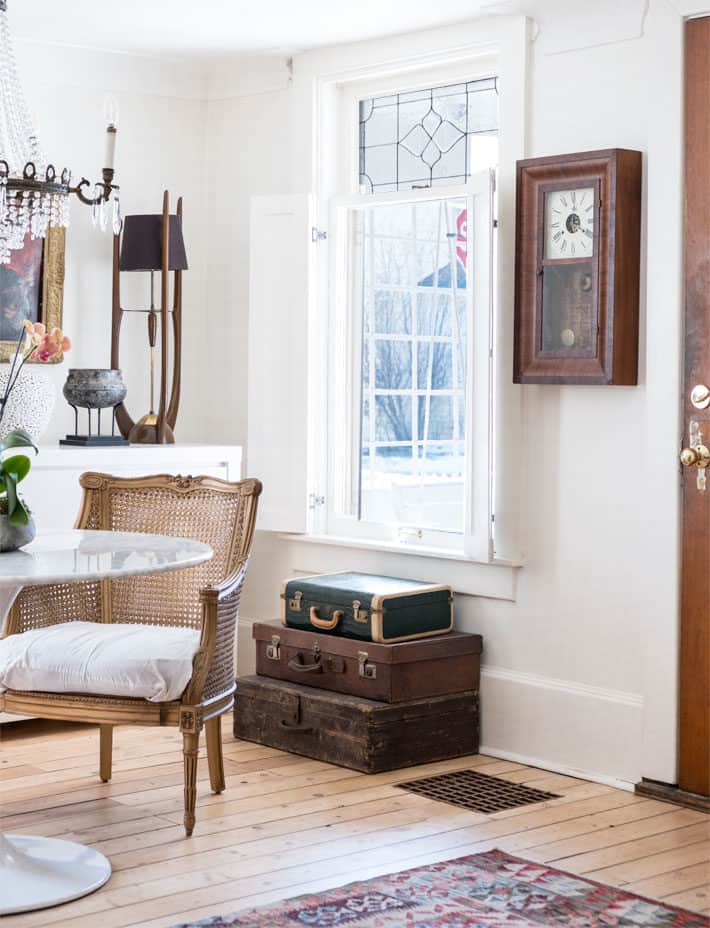 And that right there is how you get a post on the dangers of auctions AND how to fix an antique clock. Let me explain a little bit about how small town auctions work.

They all start the same. There's a bunch of garbage that somebody else didn't want in a room.

You enter the auction hall, in this case a community centre, and you walk around.  You might see something that you remember from when you were a kid.  Or a strange kitchen tool that your grandmother used.  At this point you start to soften to the garbage a little bit.  It's not so bad.  It's fun to just look at if nothing else.

You then get further into the garbage, picking through stuff and auction fever washes over you like the plague.   Say goodbye to your normal personality of easy breezy, happy go lucky gal - you are now a born killer with a pathological desire to win at all costs.  Yes.  To win the garbage.

To be fair, at this point suddenly it isn't garbage anymore, it's gold.

You cannot BELIEVE your good luck at stumbling upon all of this junk that some idiot didn't want.  Within the first pass of all the auction contents your heart is racing, you've registered to bid and you're ready to gouge the eyes out of anyone else who dares to bid on the slightly chipped, incomplete service of plastic dishes that are inexplicably covered in in Disney stickers.  They're a pretty colour.  You like them.

You're worked up but you've promised yourself you won't go over the price you set in your mind for any of the items on your list. 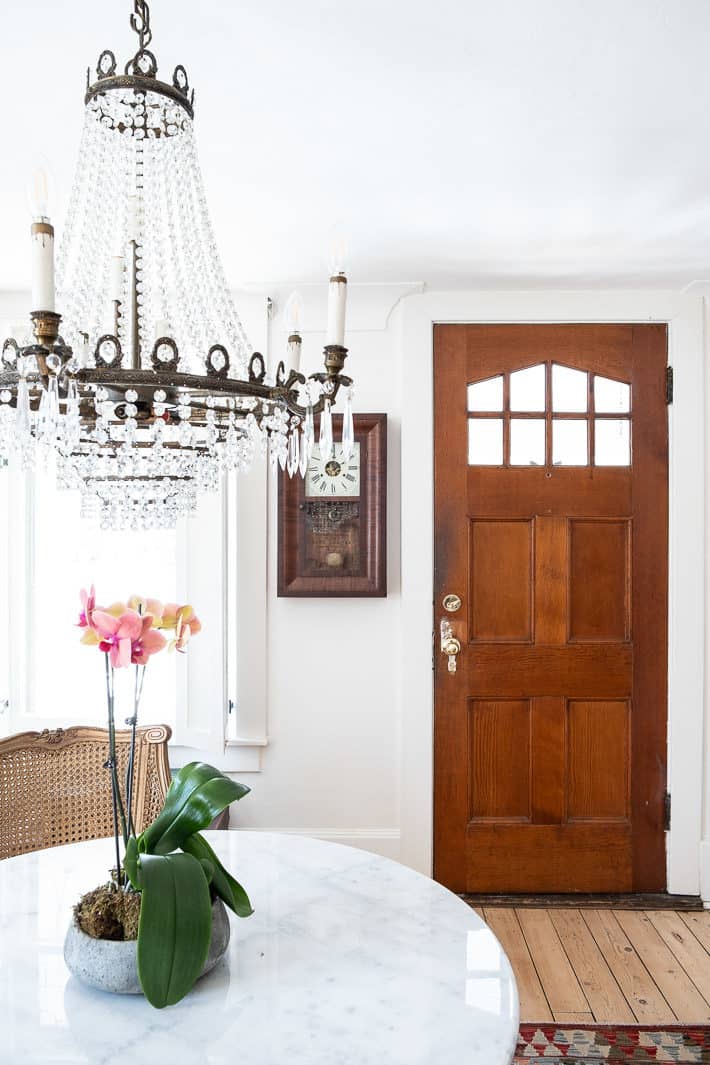 Of course you go over.  You have auction fever you idiot.  The number one symptom is loss of self control.

That's basically how I ended up with an 1852 Seth Thomas wall clock. 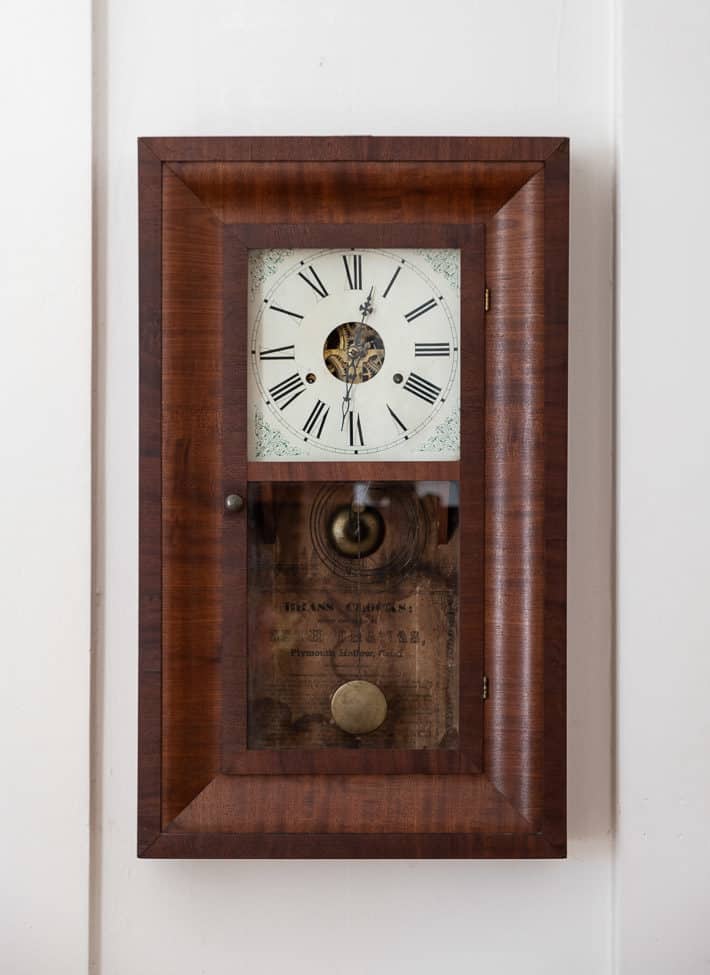 I had seen the clock immediately among the hundreds of other clocks at this auction.  There were fancy clocks, old clocks, new clocks, clocks with dancing ladies ... just a veritable flock of clocks.

But I liked this clock. It was plain, in good condition and obviously old.

The only problem was I had no idea if it worked.  No one knew if any of the clocks worked.  That's the MAGIC of an auction.

It's basically gambling but you don't know if you won or lost until you get home.

I bought my clock for $40. Which was $5 more than I had planned to pay. The clock was disassembled for transport, so when I got it home I started putting it back together to see if the $40 clock (I didn't need or have any place for) was going to work. 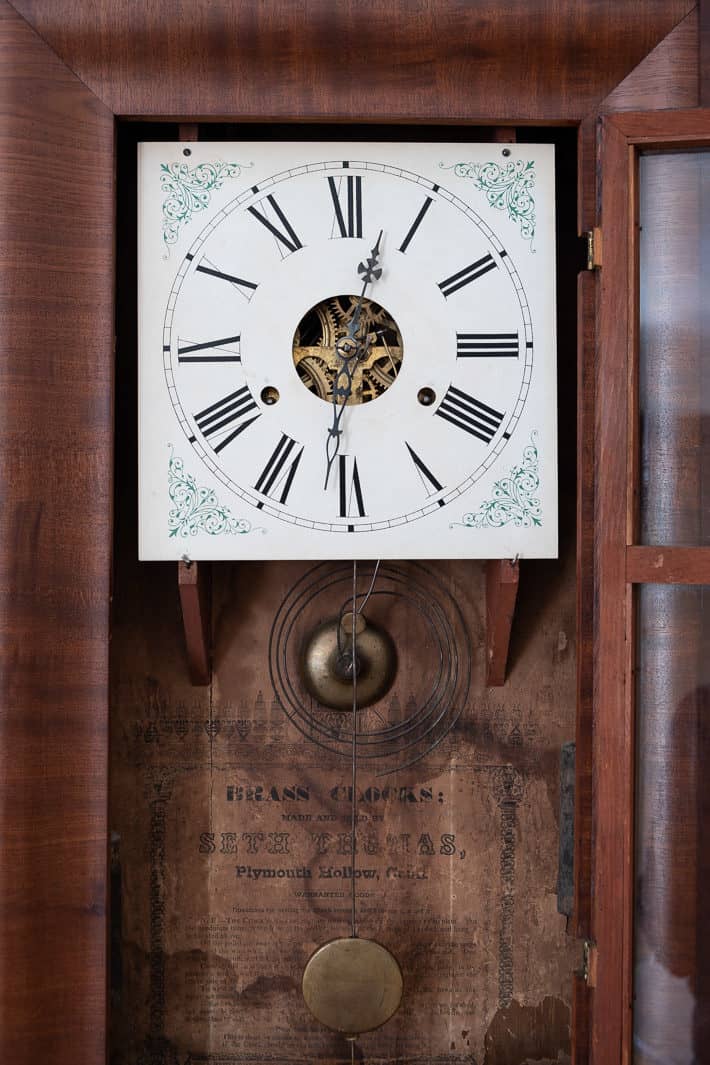 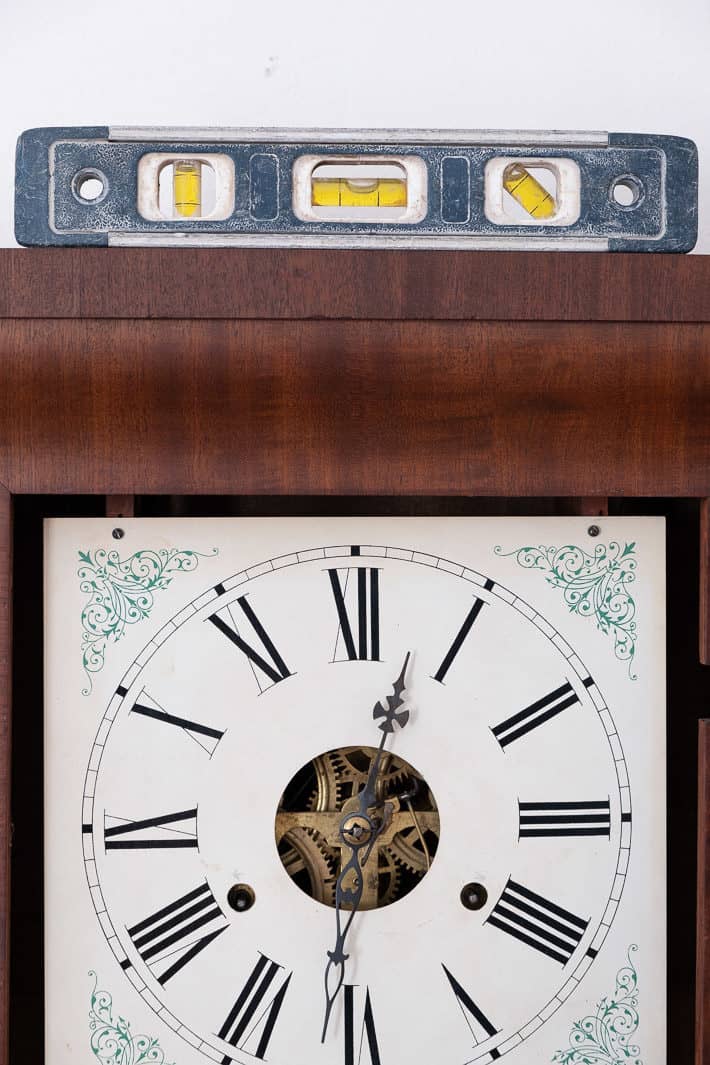 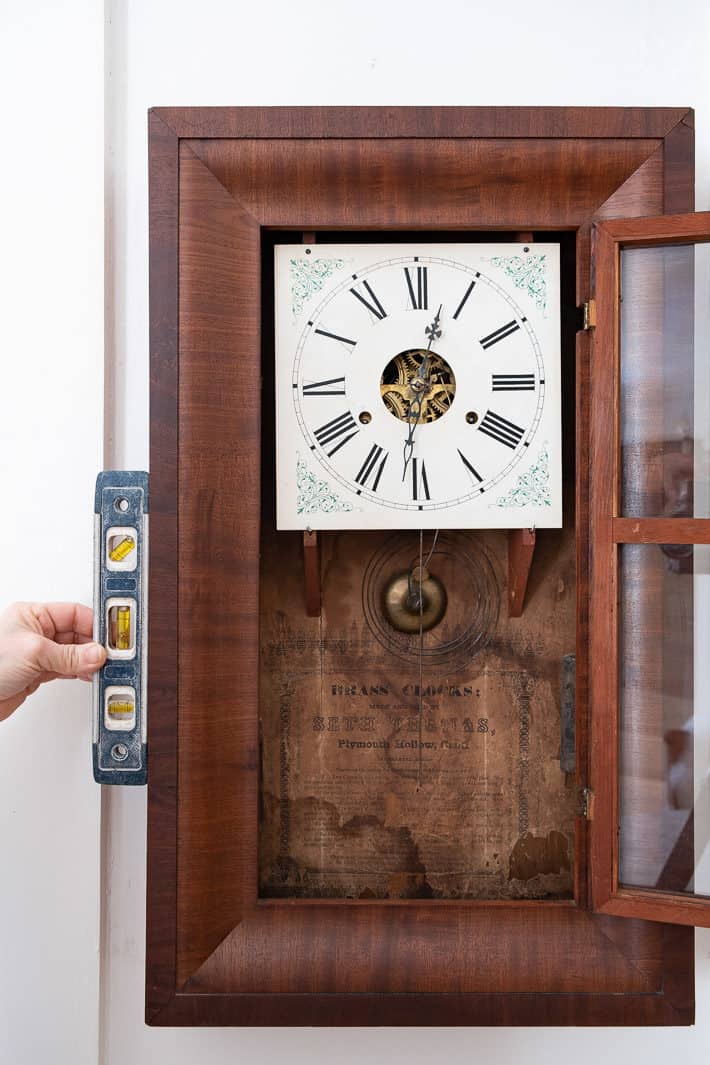 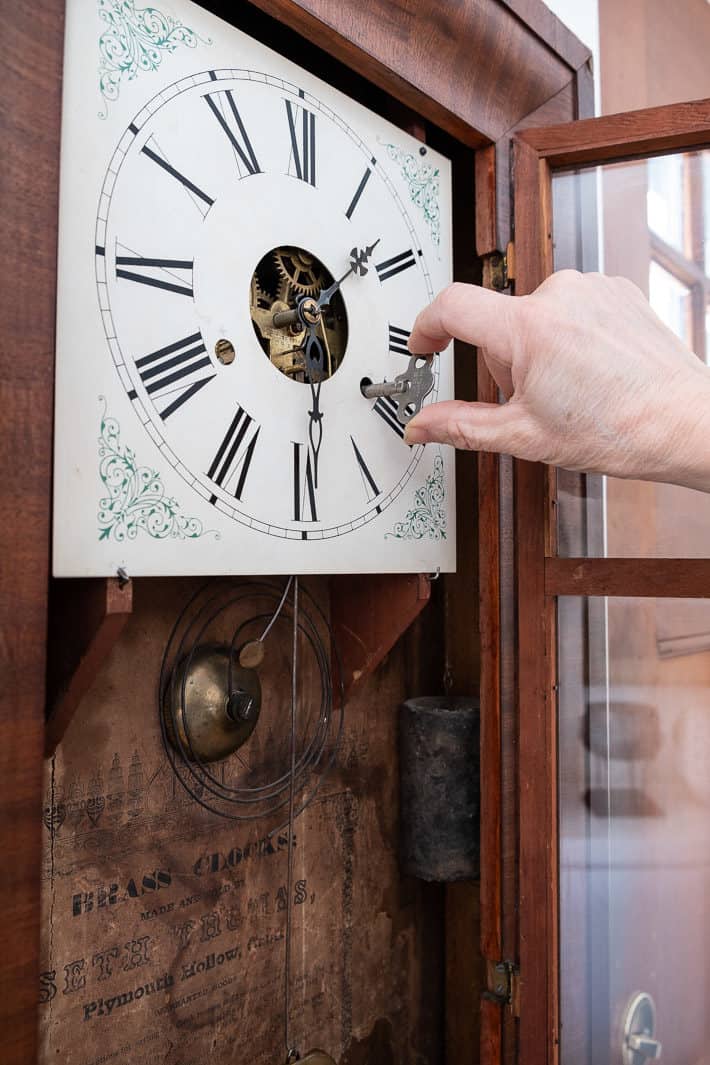 7. You can now gently push the pendulum to get it running and see if it works.

If it runs but the ticking doesn't sound even try pushing the clock from left to right from the bottom of the clock. It the ticking sounds better when you've pushed the clock (and therefore it isn't level) then you need to get your pendulum in beat. 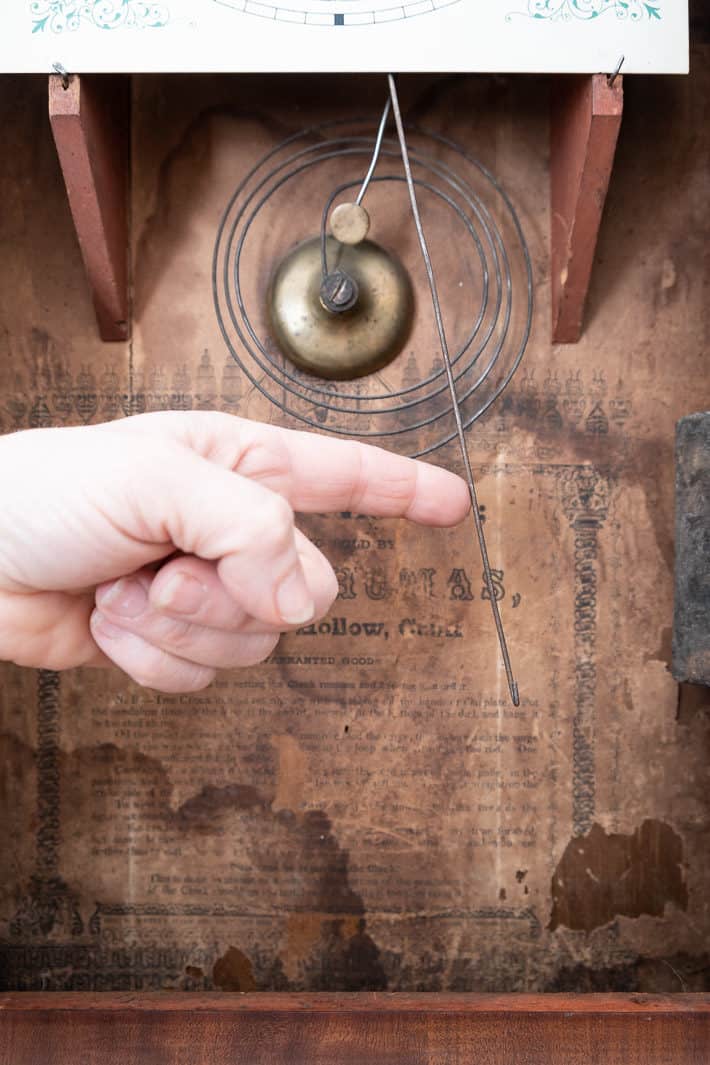 If your clock sounds better when you tilt the right side of it up, that means you need to gently push on your pendulum a little bit to the right to help it get into the proper beat. You might feel a bit of resistance.  Go just a bit further past that.  Then test the clock again to see if it sounds right.  If not, repeat. If you go too far then you might have to readjust it by pushing the pendulum in the opposite direction.

You should be able to hear the difference between the clock ticking properly and ticking off beat in this video.


K. Is your clock running and keeping an even beat?

If it is GREAT.  But hold on a few minutes before you skip down the street screaming at all the suckers in the world who didn't buy this great deal of a clock that WORKS.  Because it still might not work.

8. Check after half a day to see if it's keeping the right time.  Chances are it'll be running either too fast or too slow. 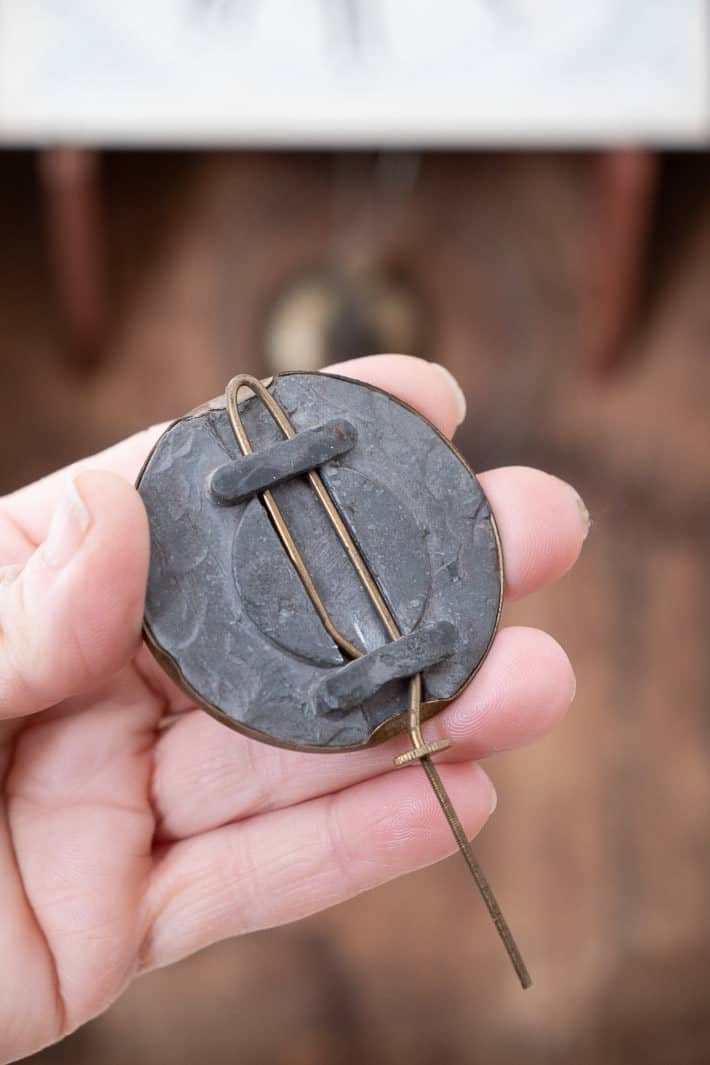 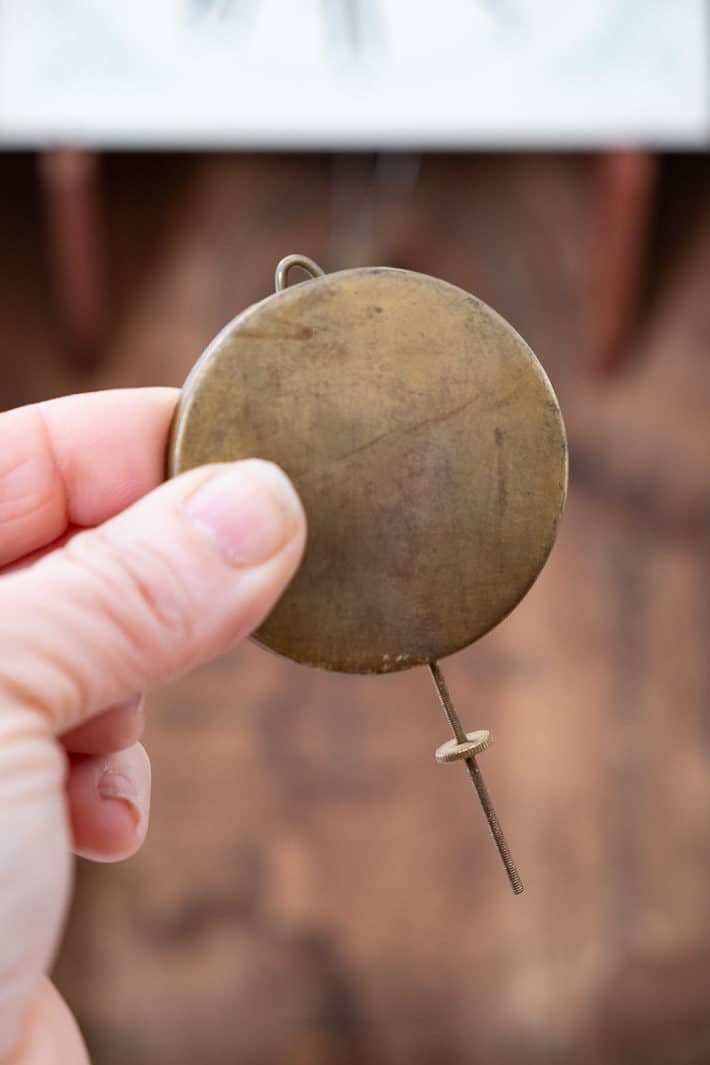 9. To change the speed there will be a nut on the bottom of the pendulum. You can adjust the nut by turning it to move it up or down in order to speed up or slow down the clock. Just turn the screw a few times so the bob either rises up or down. 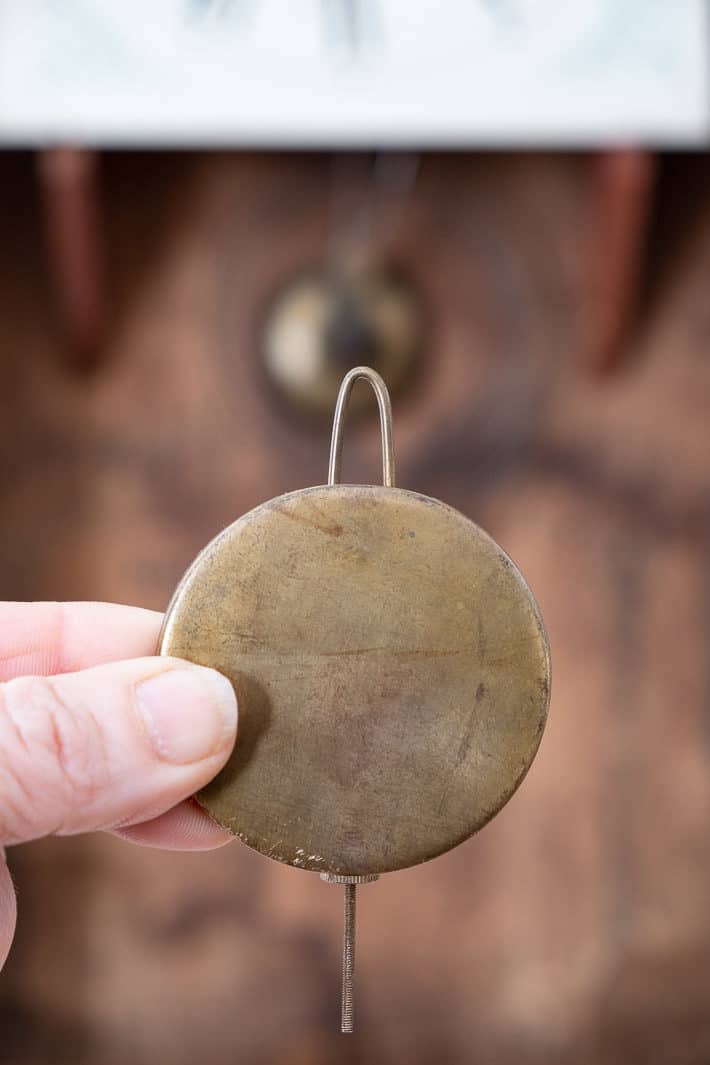 This is what the bob would look like if you wanted to slow down the clock a LOT. 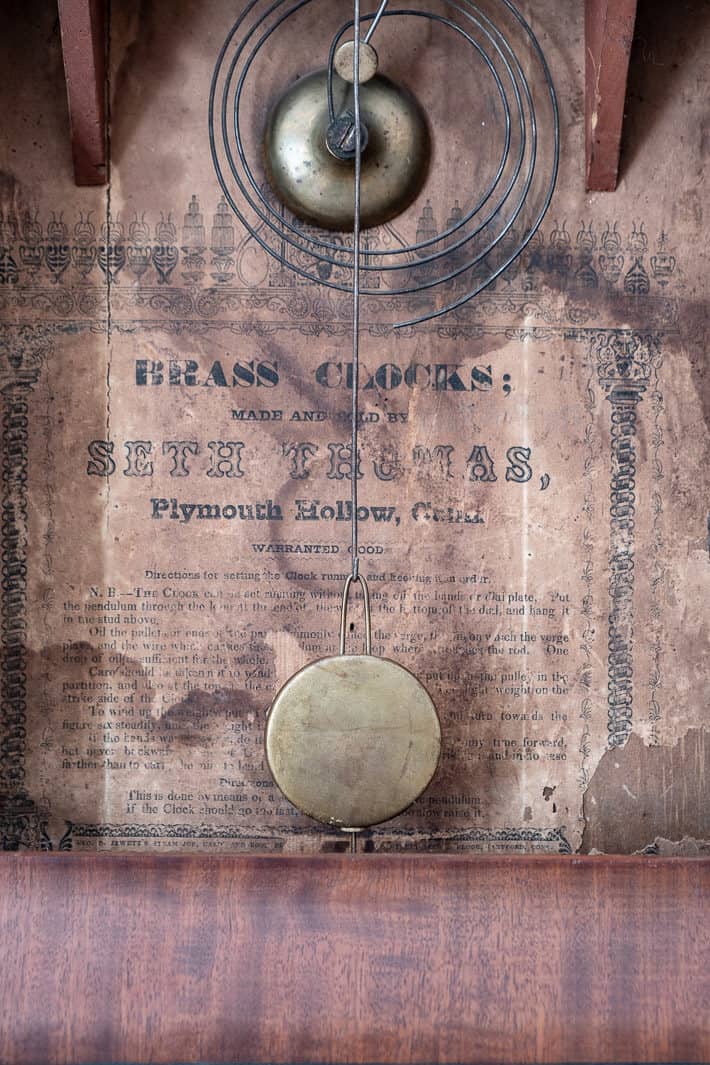 And this is what it would look like if you wanted to speed up the clock a lot. 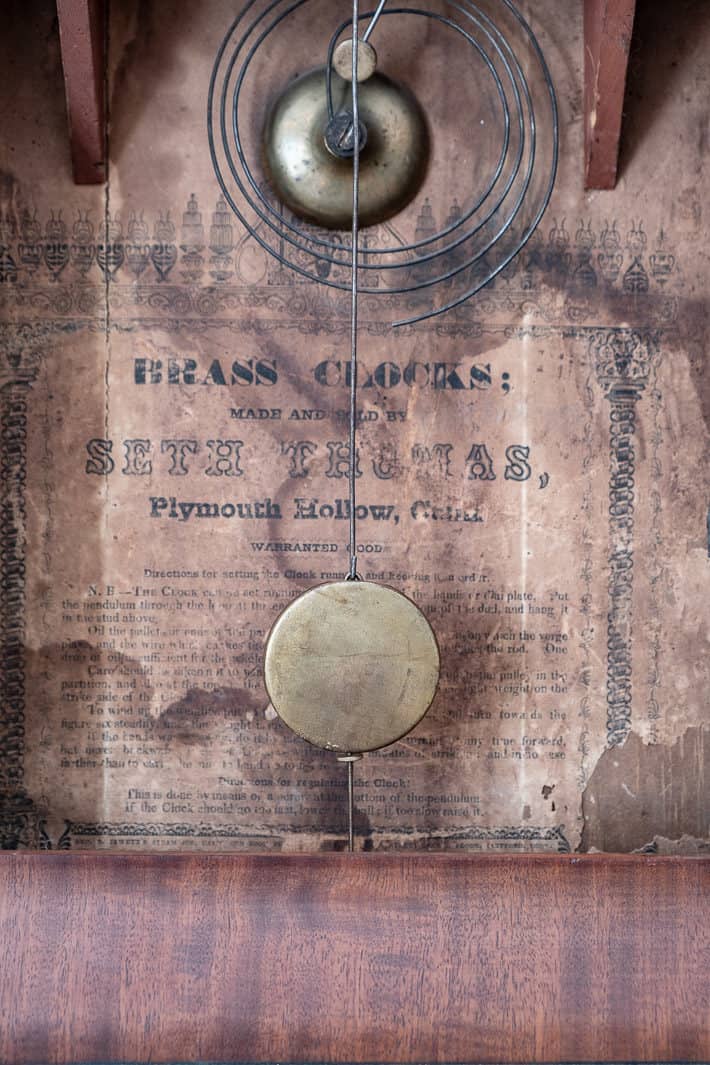 You just have to play around with the pendulum until it keeps time properly. It took me 4 days or so until I got it just right. 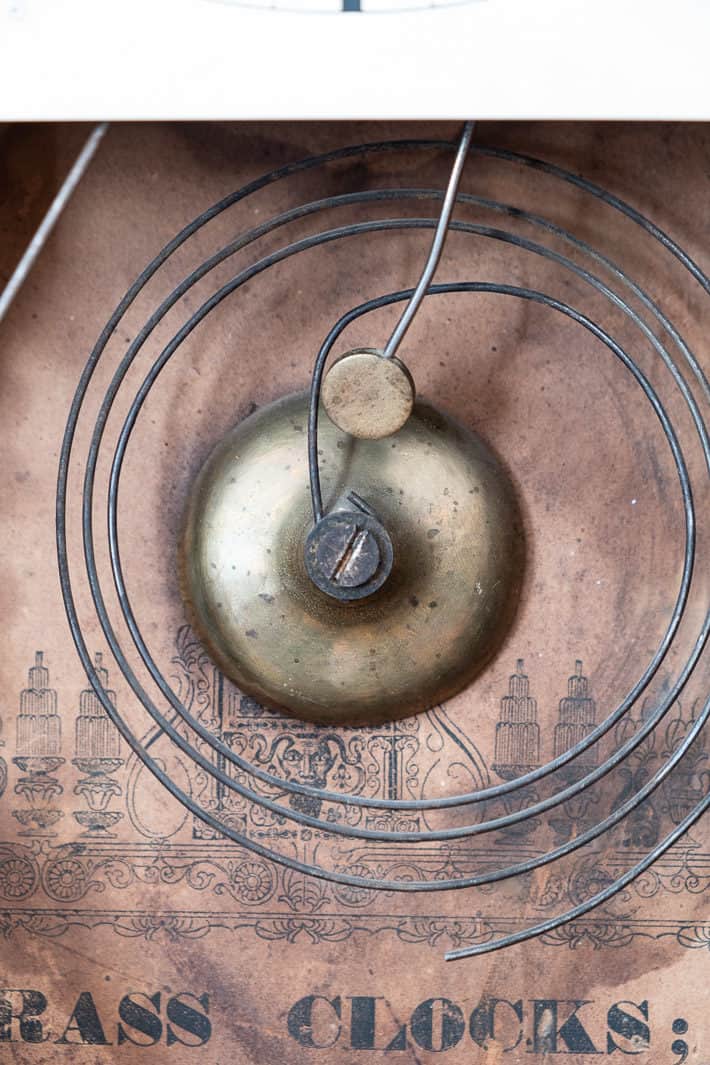 striker too close to wire

10. Adjusting the gong.  The clock makes it's "gong" sound on the hour by a striker hitting a wire or bell.  In this case it's hitting a wire.  The striker should be around ⅛th of an inch from the wire (or bell) for it to have a nice clean sound.  If it's too close the gong will sound dull and more like a thump. You won't hear the ringing, just a bang. 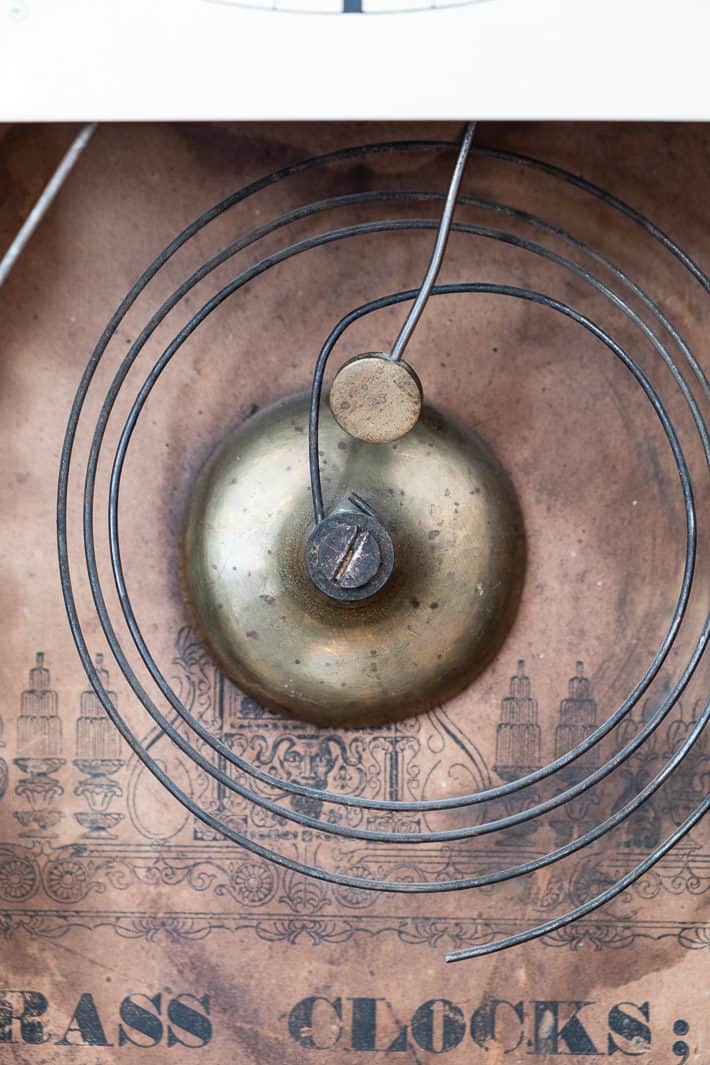 You can gently bend the striker wire by hand to pull it into a proper position. (⅛th of an inch away from the wire) Now it should give off a nice gong sound that rings instead of thuds.

As it turns out I love my clock.  That isn't always the case when you randomly bring stuff home from an auction. Oftentimes your auction fever breaks the instant you walk through your front door and you sit staring at the thing you bought wondering why it isn't glittering anymore.

At that point you either stick it straight in your basement or hide it under a bunch of other stuff in your garbage.

Then you go to another auction.