Most years by this time we’ve had at least one snowfall here in Southern Ontario.  We don’t always have snow for Christmas, which surprises anyone outside of Canada, but it’s usually at least cold out.

It’s not cold out.

How not cold?  I’m not sure that I’ve worn a winter jacket more than twice and I’m growing radishes.  Outside.  In the garden.  And they’re actually growing. This doesn’t mean winter is going easy on us, it just means Old Man Winter is recovering from a bit of a bender and won’t be making an appearance until January at which point he’ll vomit enough cold and snow on us to last until April.

So the photos of the outside of my house at Christmas look as though they could have been taken at a Jamaican all inclusive resort this year.  The only things  missing are the drinks with umbrellas and the beach.  And bikinis.  And lounge chairs and lots of food and a misshapen man wandering around in a most unfortunate thong bathing suit.

Actually now that I look at the photos, really the only thing missing is snow. 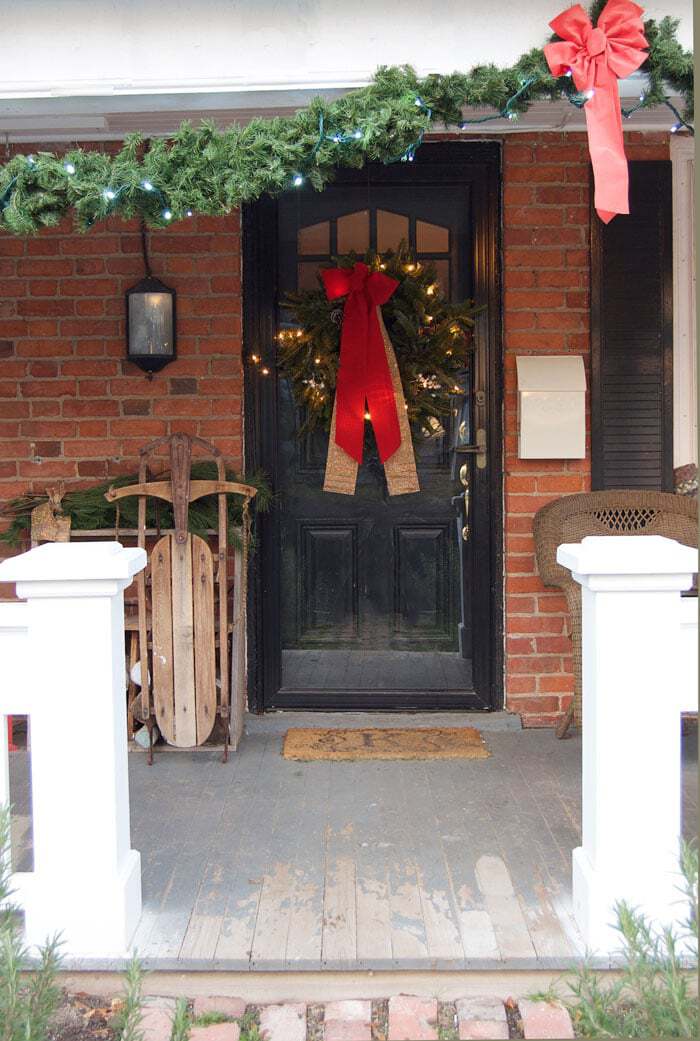 Flanking the bottom of the photo are my two huge rosemary bushes which I’m hoping I can get to live through the winter outdoors somehow.  I’m just 1 zone shy of them being hardy.  Just above the rosemary you can see the beautifully distressed porch floor I’ve done.  You’d almost think it was actually a mangled, peeling, porch instead of what it really is, which is obviously artistic genius. 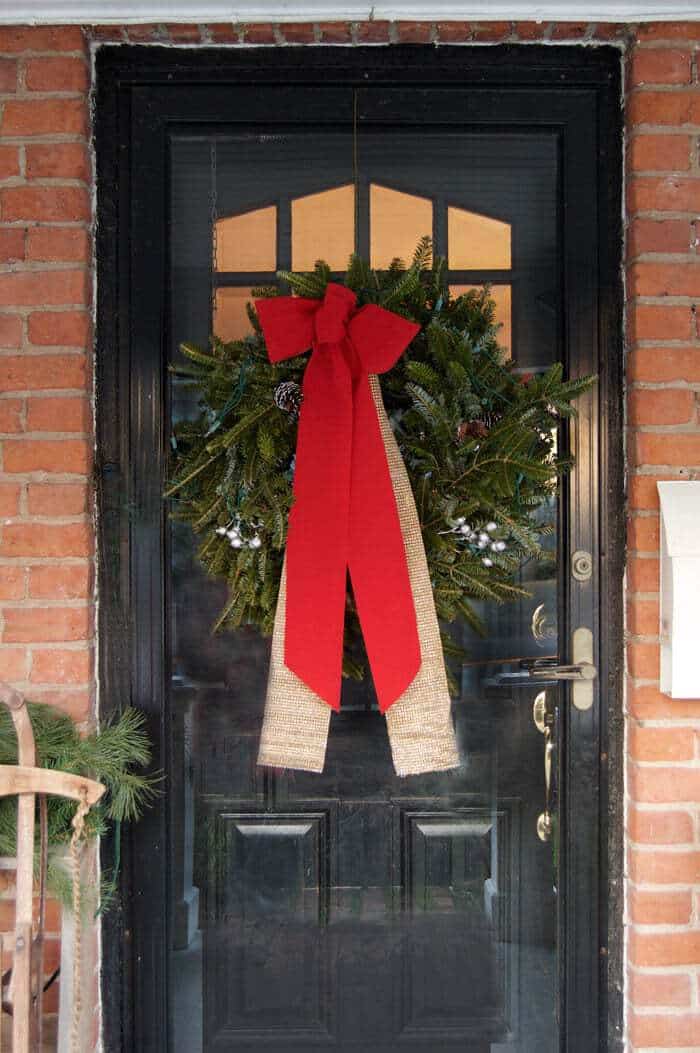 The wreath was the cheapest, biggest natural wreath I could find (I think it was $19) which I dressed with a red velvet bow I made from Dollar Store ribbon and tails of gold ribbon added behind.  I wanted classic Christmas. 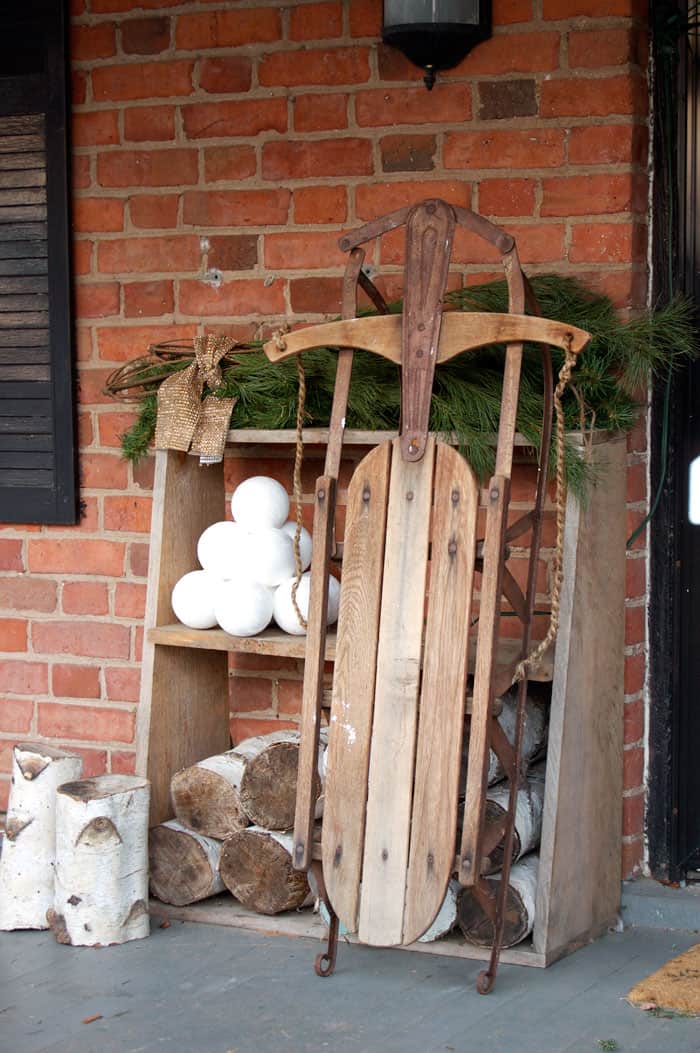 If you have any old winter sports equipment now is the time to drag it out. Now is also the time to go to second hand stores or flea markets to find this stuff.  The sled you may remember was hanging on the living room wall for Christmas last year.  Now it’s on the porch with my birch logs, a pyramid of styrofoam balls I glued together to look like snowballs and some extra greenery tied with the same ribbon that’s on the wreath.  An antique sled like this is normally around $150 but I found this one for way cheaper at a flea market. I can’t remember how much it was but I bet if you read my post from last year I remembered how much it was then. 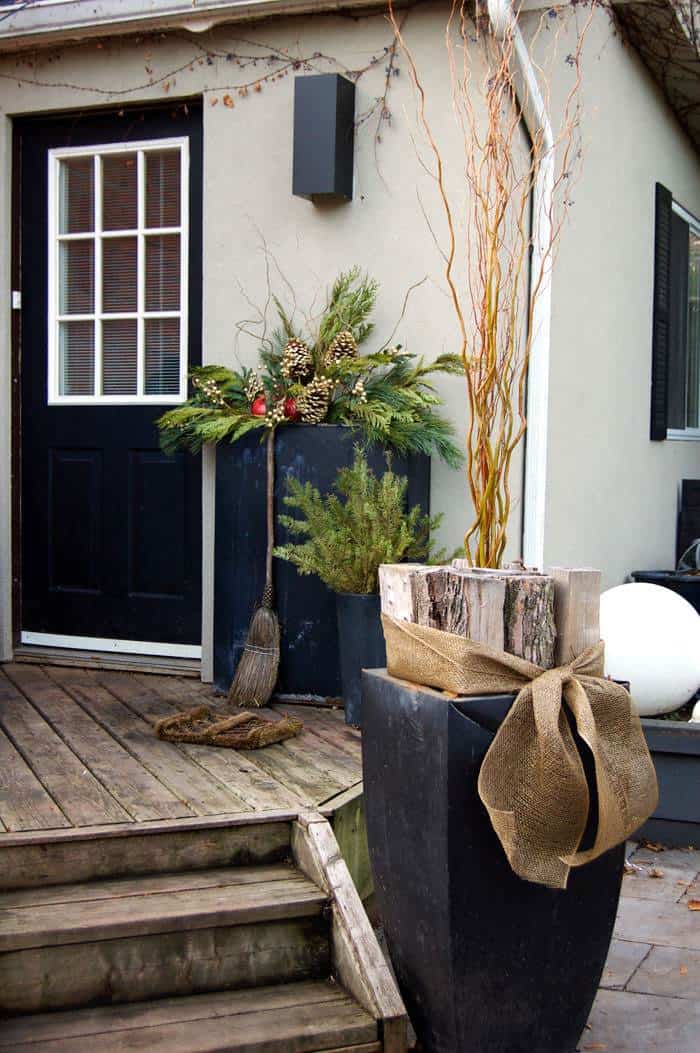 Yeah, a broom, cause it’s December and I’m still sweeping my porch. 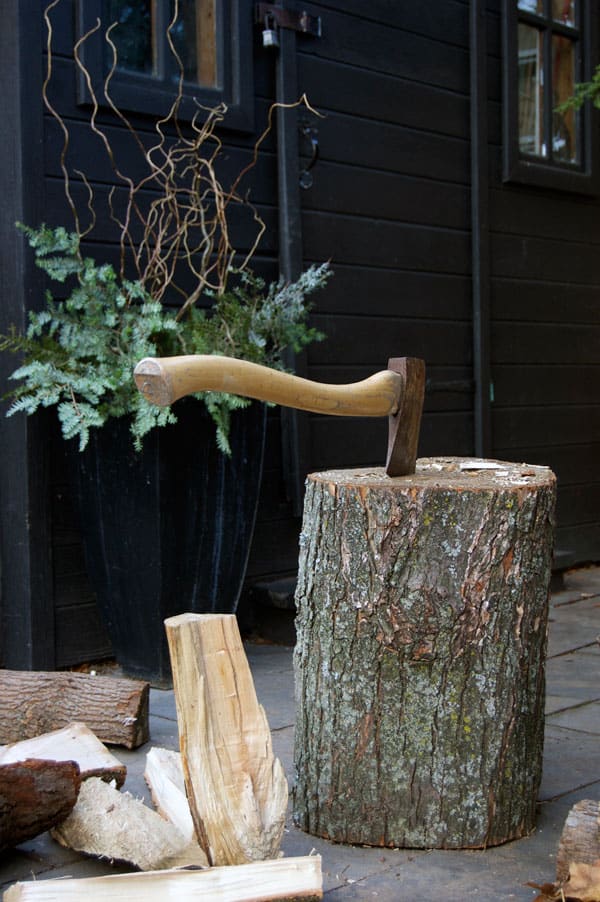 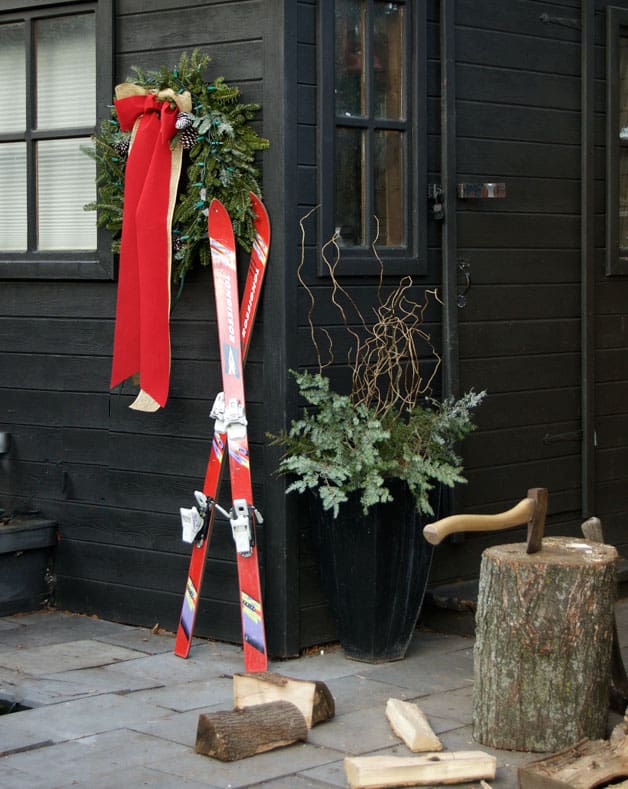 You can see the potting shed from my kitchen window so I like to put a few Christmasy things out there for me to stare at while I lean on the counter and wait for the dishes to do themselves.  Last year I had some of my wood stacked there with fresh greenery on it. That’s all I needed because everything was covered in snow and it looked beautiful last year.

This year I added some skis. I bought the set of skis at my local thrift store for around $6.  I was going to paint them white but when I propped them against the potting shed they looked so great with the red bow that I just left them red.  Maybe I’ll paint them next year.  Or maybe I’ll have a live moose in my backyard next year instead. Who knows. At this rate I might be installing a pool with swim up bar at this time next year.

Other sports things you can pick up at flea markets or second hand stores for decorating outside are snowshoes (expensive though), old white figure skates, which would look GREAT hanging from a hook on a garage or front door or any wood sled.  Oh! If you’re going to put the skates out make sure they have some kind of blade protectors on them.  You don’t want to slide through a jugular while walking past them.

Those are the things I’d recommend you go and buy if you think your outdoor decorating is missing something.  A sled, old figure skates, or snowshoes.

If you can’t find any of those things for a good price you can set a chalkboard outside and literally draw a pair of skates or a sled on it.  Chances are if you don’t have enough money to pay for $6 used skis it’s because you’re a creative artistic type who doesn’t get paid your worth,  so you’ll have no problem with the chalk drawing.