Rhubarb Crisp with a crumble topping made with oats, brown sugar and butter.  A healthy, refreshing fruit dessert!  O.K. it's basically a bowl of sugar and butter with rhubarb throw in for colour. And to be perfectly  honest I'm not even sure that it's a fruit.  But still ... 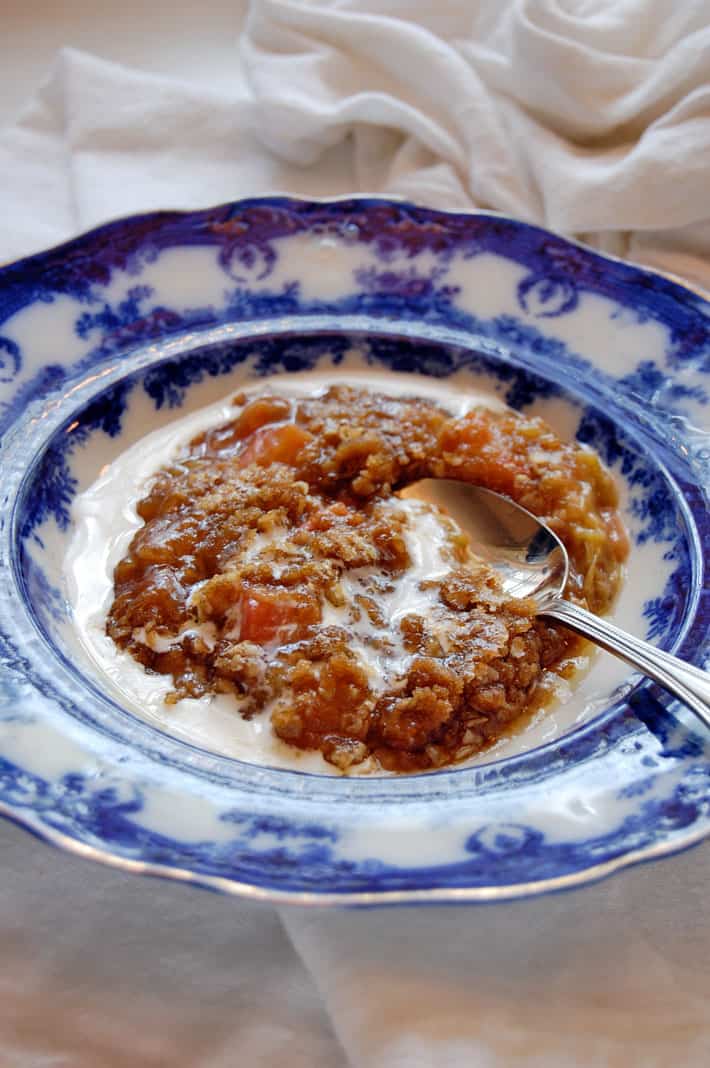 You've gotta love an edible plant that comes up year after year no matter how much attention you do or don't give it.

Rhubarb.  It's the gift that keeps on giving. 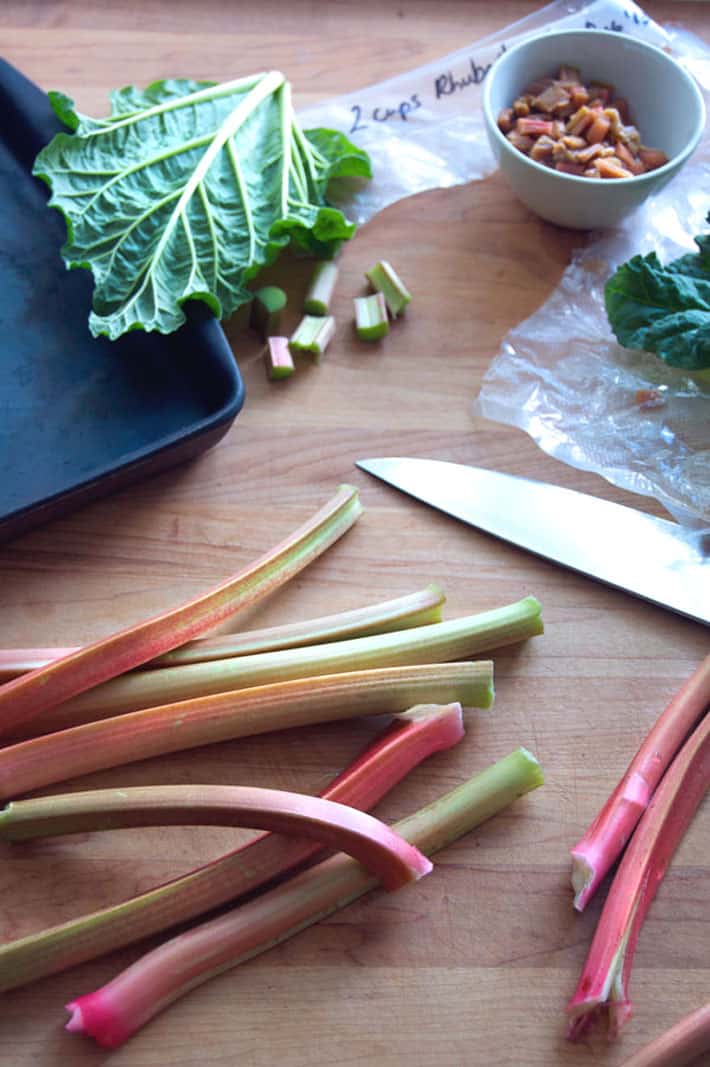 I'm not certain, but I'm pretty sure there's nothing you could do to discourage Rhubarb.  It's the first to pop up in the garden, the last to go away and pretty much puts up with every kind of neglect you can throw at it.

And prolific.  Wow.  It never ends.  It's like those stupid orchids you bring home from Costco or Ikea that live for months on end and you wish would die already.

The best way to deal with a mass of anything you don't need is to give it away. That way it appears you're the generous one by giving it away, when in truth ... the real gift is getting rid of this massive, relentless, pathologically prolific plant.

If you don't have this problem with your rhubarb growing like crazy, you might need to split it.  Rhubarb plants should be split (like I show you in this post) every few years to keep them invigorated. 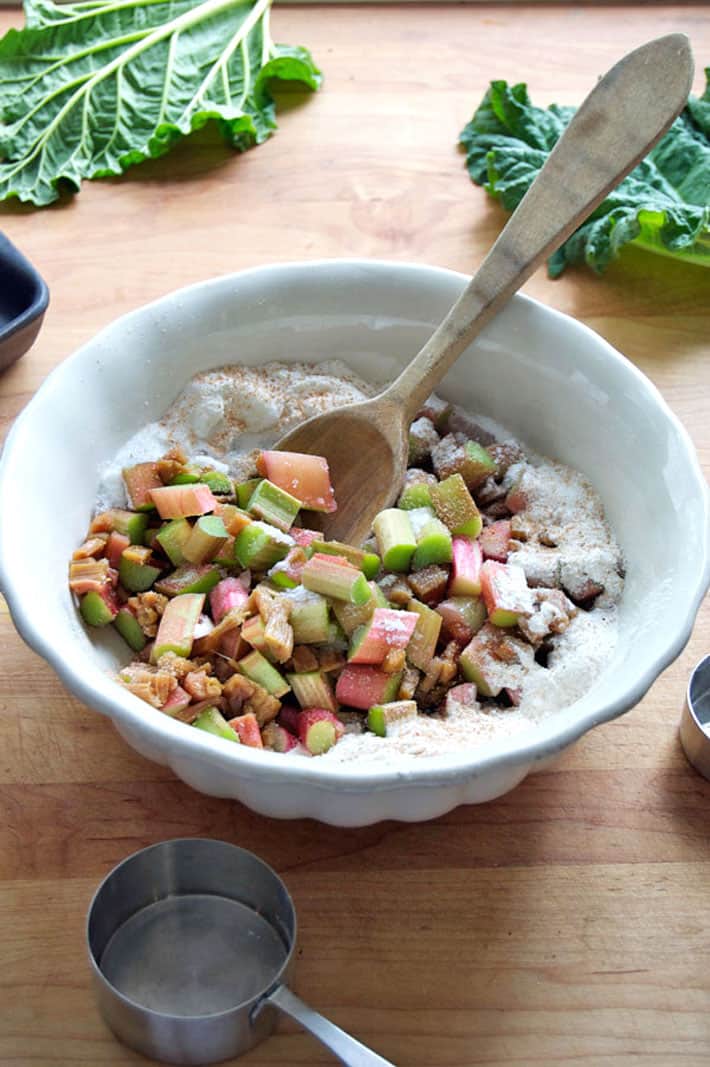 For the guts of the crisp you basically just mix up some sugar, cinnamon, rhubarb and water.  For the top it's some melted butter, quick rolled oats and brown sugar.

What follows is my Rhubarb Crisp recipe. I make it several times in the spring, then I get sick of it.  Once I get "crisp sick", ... I'll start gifting it.  'Cause I'm kind and generous and I have a shitload of rhubarb.  Only I probably wouldn't use that actual phrase on the gift card. 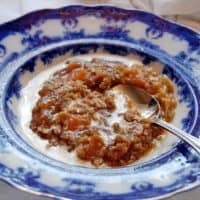 If you plan on giving the gift of Rhubarb Crisp just pack the dry ingredients into mason jars and attach a tag or two with the instructions. 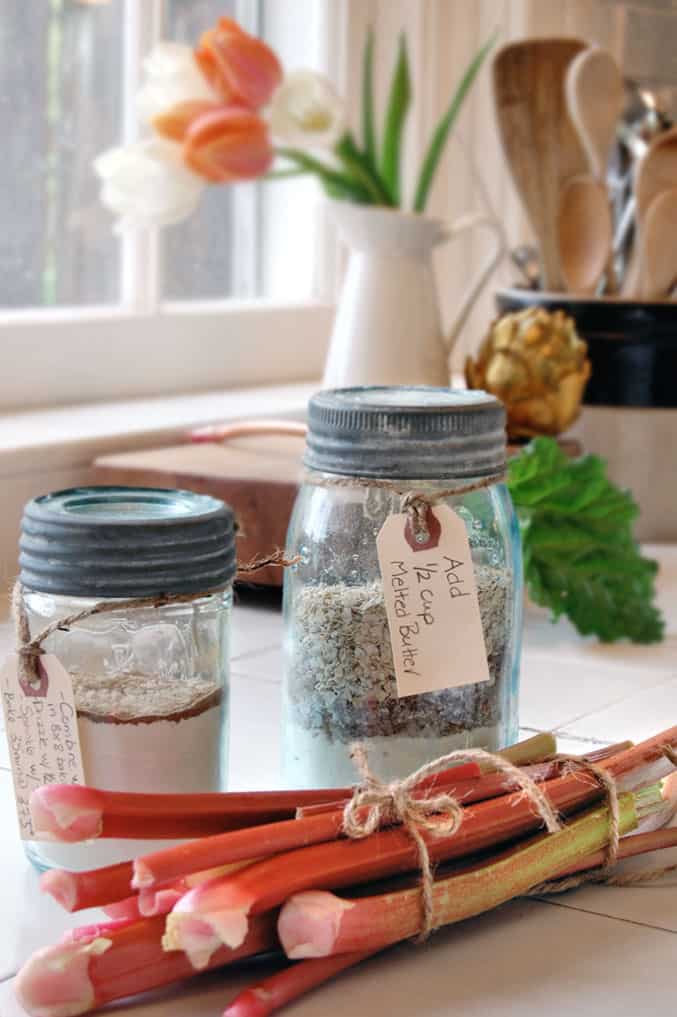 One jar for the filling and one for the crumble topping.

If you decide to make this for yourself as opposed to giving it away, because you're very, very selfish ... you might want to consider topping it with some cream. Either regular old coffee cream, like I've used in the photo, or a dollop of whipped cream.  Isn't dollop the best word ever?
And by the way, this dessert is actually a tad too sweet for my tastes.  I really like it, but if it were just for me I'd cut down on the sugar a bit.   I'm not what you'd call a dessert lover, so I'm really not the best judge of whether something is too sweet or not. I've been known to throw my arms up in protest over lemons being too sweet.
As you know I'm more of a potato chip expert.
So ... take that as you will.  You can add a little less sugar if you like.  Or ... you can forget the recipe entirely, and just eat a bowl of potato chips.