If you like rice pudding, you're going to love Risalamande, a fancified Danish version of rice pudding that's full of almonds, velvety whipped cream and topped with a cherry sauce.  With NO calories!!  Provided you just look at it. 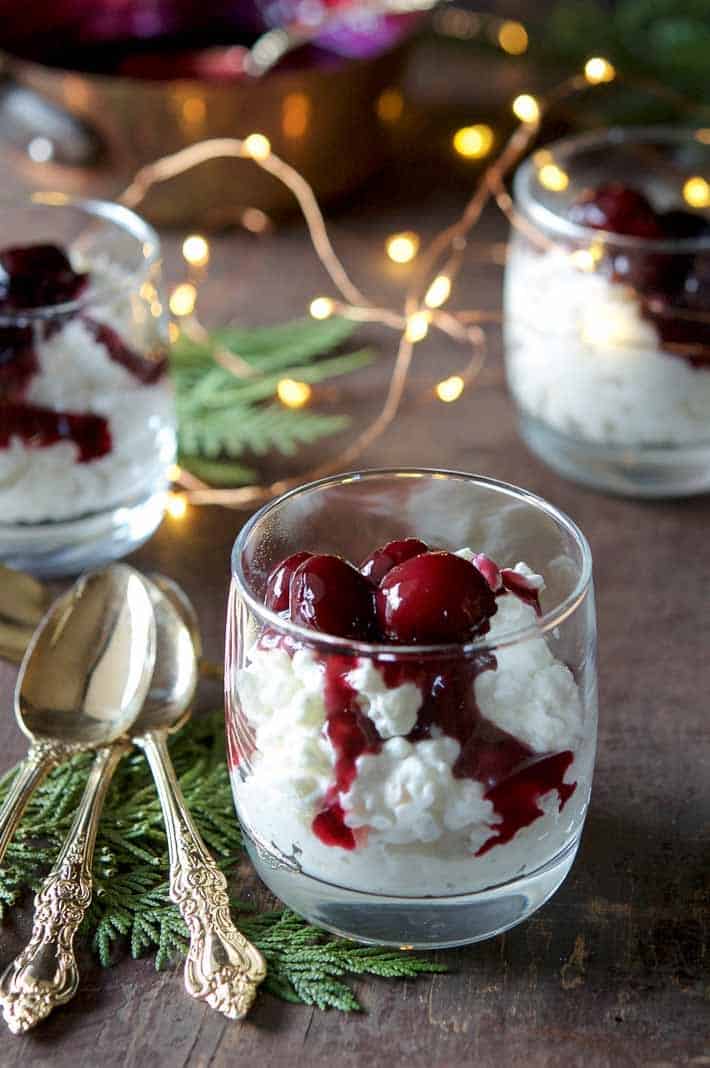 I know.  I don't even like dessert and I think it looks delicious.  More shocking is the fact that I think it tastes delicious. This because I find a nice bag of salty potato chips are the best dessert. This Danish Christmas tradition of a rice pudding concoction however gets my full support for Christmas Eve dessert.

Risengrød (rice pudding) has a long history of being loved in Denmark. Then, in the 1800's, the rich decided that it was awfully embarrassing to be loving the same dessert that peasants loved.  At the same time they weren't willing to give up their love of rice pudding. I mean, who could?  So they bougied it up with the addition of expensive whipping cream and almonds and claimed it as their own.

But I'm generally a big fan of rice pudding precisely because of the fact that it isn't too sweet.  It's rich and creamy and everyone knows that all the best desserts are made with rice.  Just ask my good friend Mango Sticky Rice.

Risalamande (translates to almond rice) is what's traditionally served on Christmas Eve in Danish households. Except my childhood Danish household apparently, where tradition was to pass around Creme de Menthe and ashtrays.

A couple of years ago I thought I'd try it out myself to see if it's a Danish tradition I'd like to resurrect for my annual Christmas Eve party. Now that 2 years have passed I know that I do indeed love it but have no idea whether I'll be able to have a Christmas Eve party this year.

Making this dessert is really simple.  You cook some basic rice pudding, stir in some almonds and whipped cream then top it with cherry sauce. 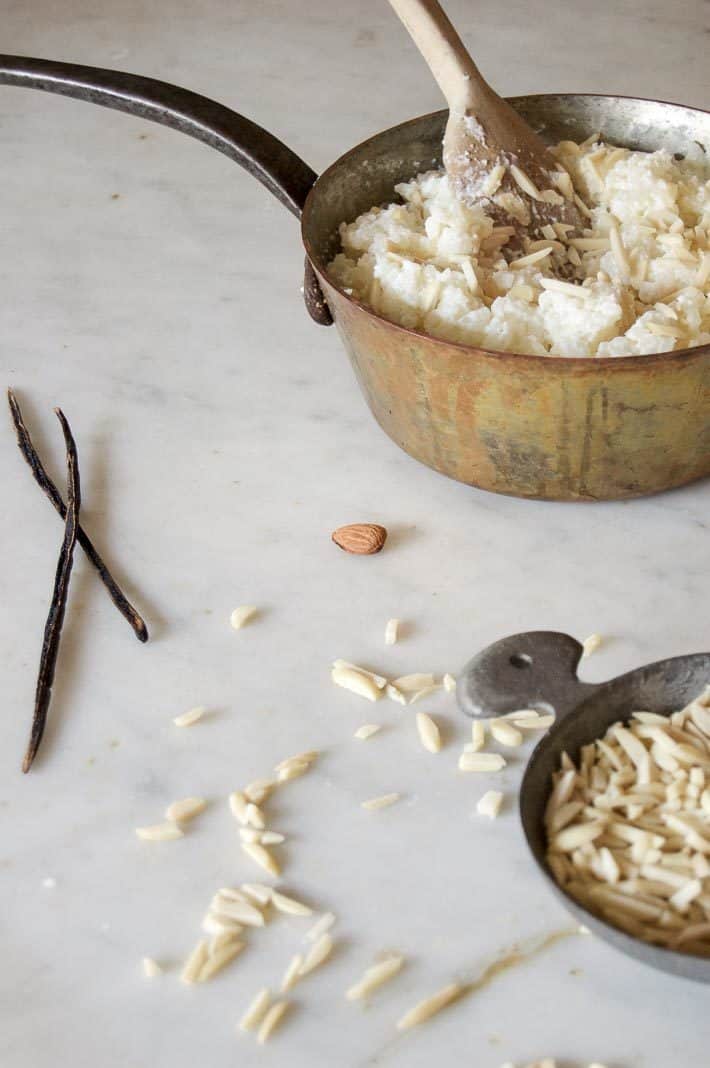 The one extra special thing about Risalamande are the almonds.  And not just the almonds, but the one, single whole almond that gets added to it.

The tradition is to serve all of the rice pudding and whoever gets the whole almond wins a prize.  If you're the one who finds the almond  you're supposed to tuck it in your cheek or hide it so no one knows it's been found.  That way everyone is forced to eat all the rice pudding in the entire house thinking the almond might still be available to be found.

Evidently leftover rice pudding is a sin worse than carpeted bathrooms in a Danish household. 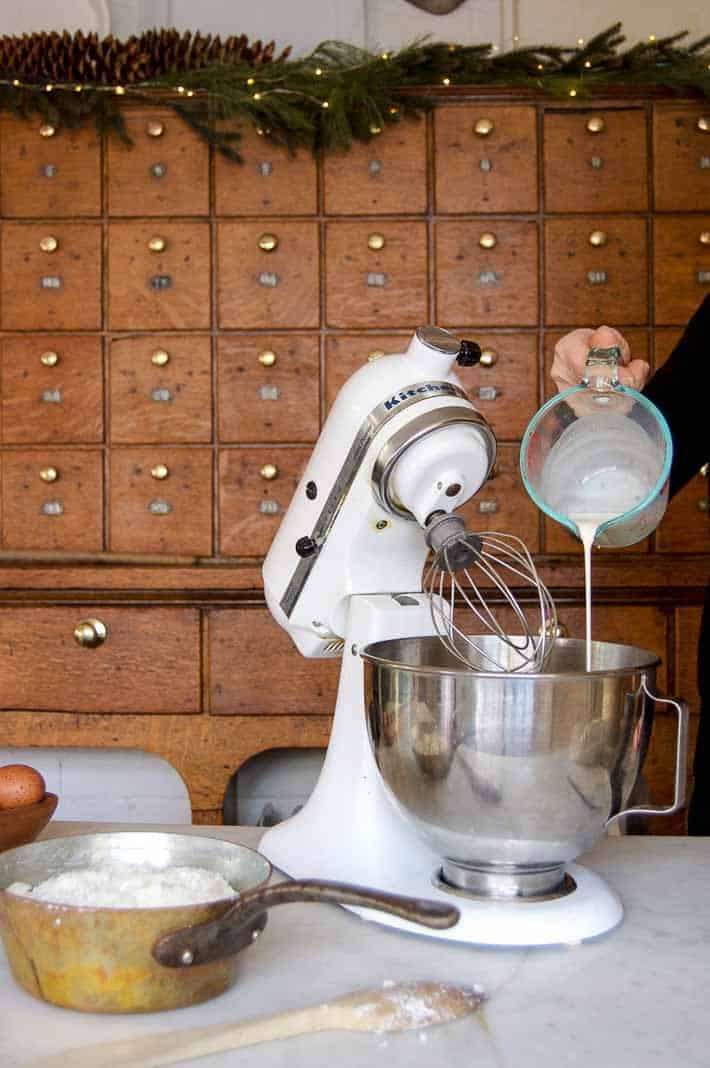 Also just so you know, Danes love butter and whipping cream, just as a general rule. And that is why we love the Dane's. Of course they offset all that fat in their diet by eating pickled herring.  Nobody's perfect. 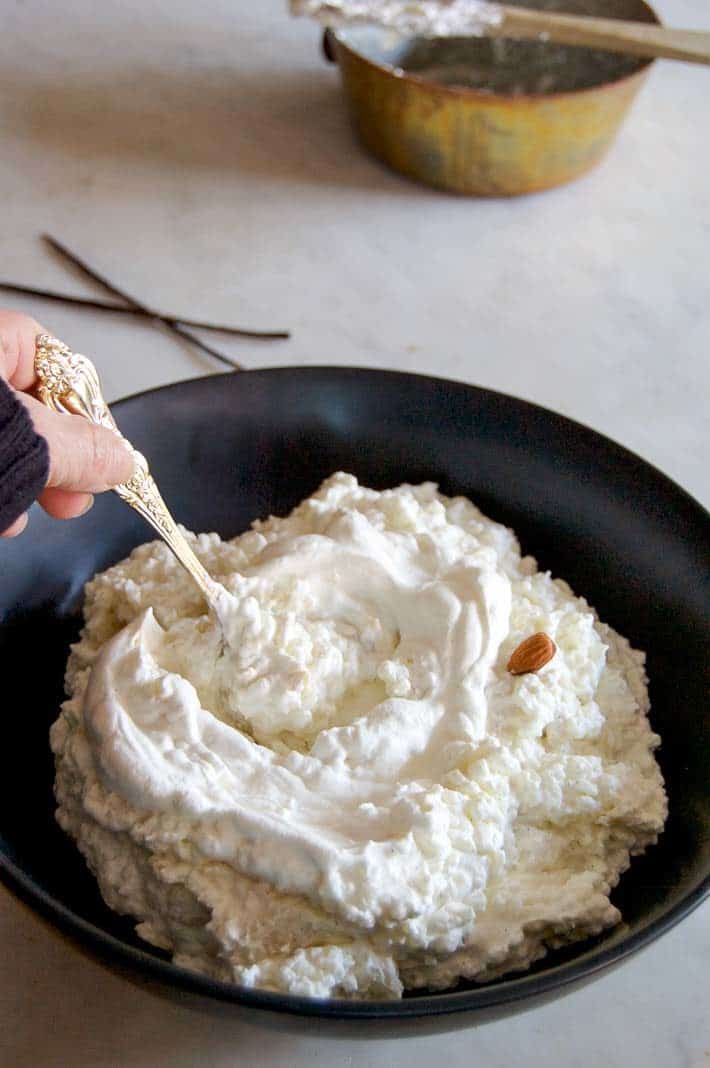 Just a photographic reminder to add the whole almond because it's easy to forget when you're in a whipped cream coma. 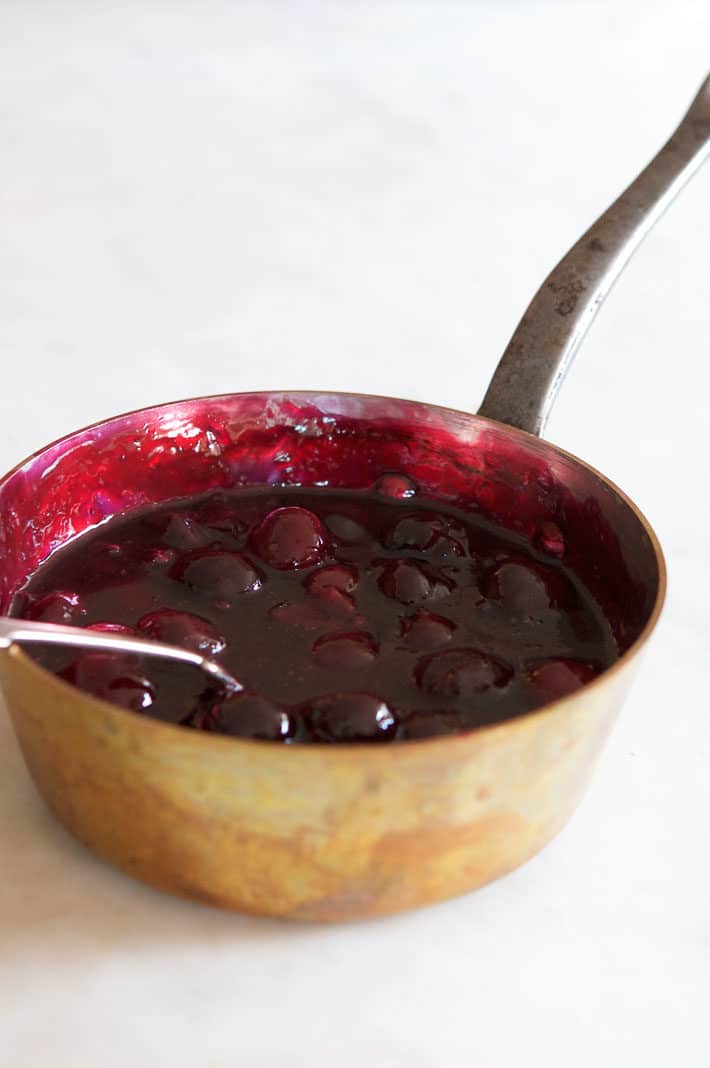 You can go as complicated or as easy as you want with the cherry sauce. I made my own out of frozen cherries, sugar and water but if you like things easy and just want to dump a can of cherry pie filling on top, feel free. 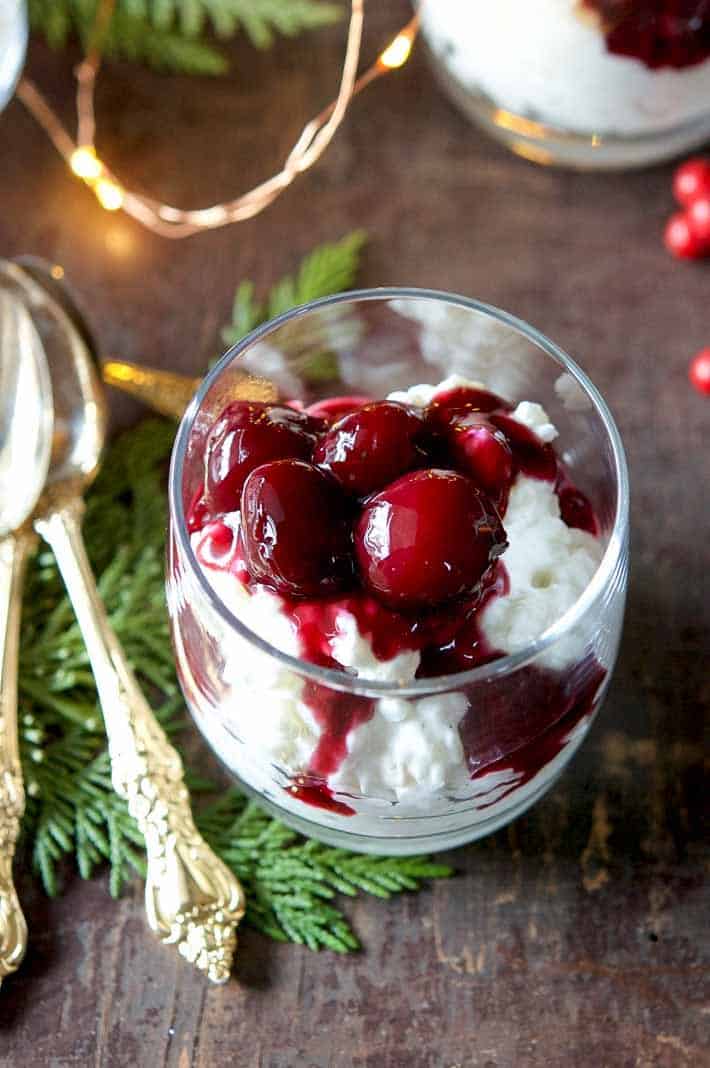 Just don't expect it to look like this if you do.  Cherry pie filling will be a bit gloppy, although if you heated it up it will become runnier. 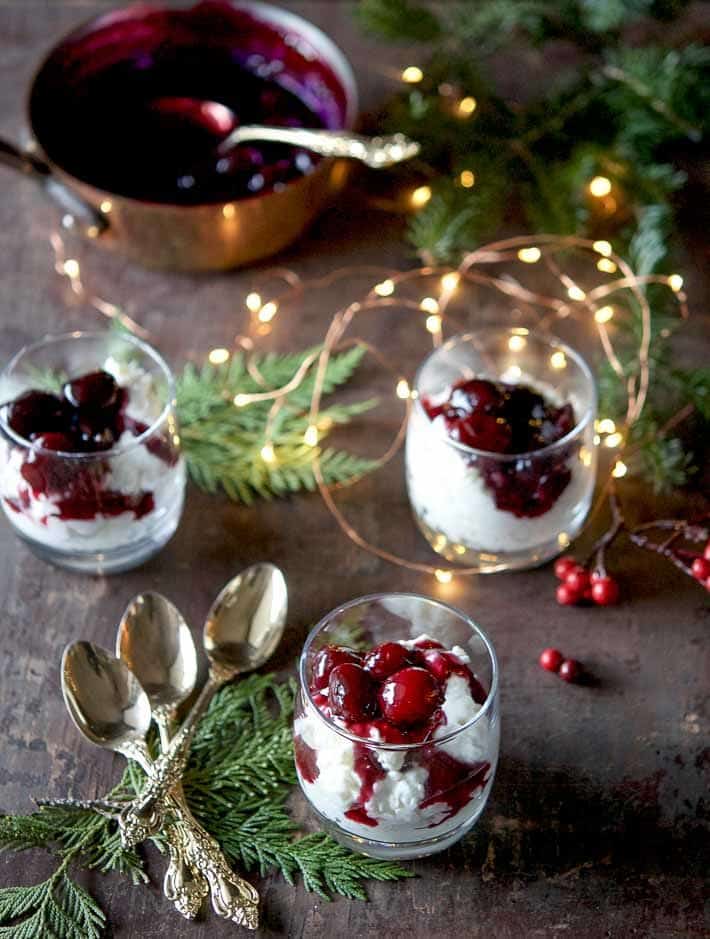 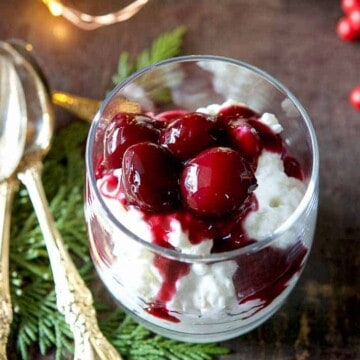 Putting it all together

People will say IT IS VITALLY IMPORTANT YOU USE ARBORIO RICE.  It isn't vitally important. People will say IT IS VITALLY IMPORTANT TO USE REGULAR, LONG GRAIN WHITE RICE.  It isn't vitally important. In other words, use whichever you have and it'll be delicious. If you simmer your rice and milk mixture too long it'll get very stiff and solid after it has cooled. This is  normal, just add a bit of milk to loosen it up if you want, but the whipping cream will do all the loosening you need really. This is all done to taste. If you like a sweeter rice pudding, add more sugar. Ditto for the cherry sauce.

Don't be alarmed at all the steps. It's not hard to make, but there are 3 components: the rice pudding, the whipped cream and the cherry sauce. 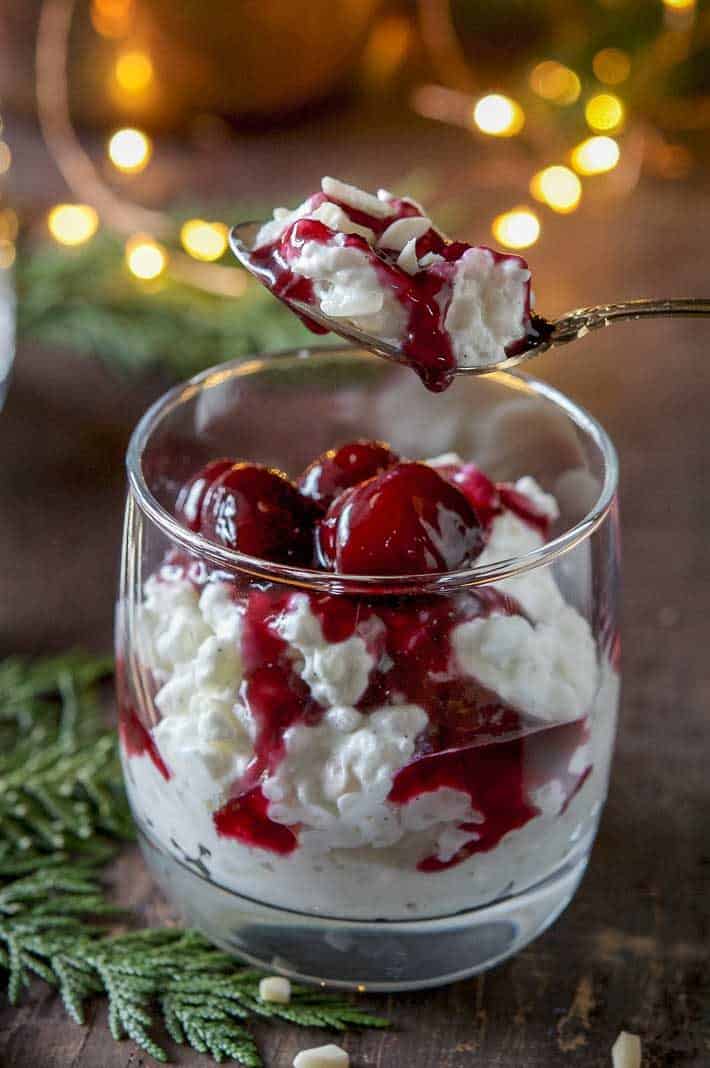 It even looks Christmassy which guests will appreciate. If you are being asked not to get together this holiday season I really think you should still do some kind of special Christmas food. Whatever you like. It doesn't have to be Risalamande, it could be shortbread cookies or bacon wraps or whatever food your family serves specially during the holidays.

If I am home alone and feeding only myself I'll consider this rice pudding but will probably go for the slightly less popular Christmas Eve rice dessert of chicken fried rice.