You know that silvery colour firewood gets after it's been cut and sitting around for a few months?  Until it is that exact colour, my mother doesn't think her steak is done.  Sort of a grey driftwood, cardboard box kind of colour.

Growing up I took it for granted that steaks and roasts were supposed to be hard and chewy.  Like jerky without  the flavour.  Cook it any less and you might get cramps.  Or worms.  Or "the" diarrhoea.  When I got outside of my mother's anglo-saxon, white bread, peas in a can inspired kitchen and was offered a real steak ...  well ... I nearly vomited.

All that redness.  It resembled ... um ... meat.  Blech.  It took about 5 years before I could handle eating a steak that didn't look like something you'd bury a hamster in.

And once I figured out steaks could be nicely  seared on the outside and warm and tender on the inside without disastrous intestinal consequences ... I developed a bit of an addiction.

An expensive one at that.  If I'd developed an addiction to platinum dusted cocaine it would have been cheaper.  A single really good steak is about $20.   A half decent one is probably $10.  So in order to feed my addiction and maintain a bank balance, I started cutting my own steaks from whole roasts.  I haven't bought a butcher cut steak in about 12 years.

And here's how you do it.

How to trim a tenderloin roast and cut it into steaks.

1.  The best roast for cutting into steaks is a Tenderloin.  That's my personal preference anyway.  Stiploins comes in at #2.  You can also do a Sirloin Tip (only for rare or medium-rare steaks otherwise they get tough), Top  Sirloin and Prime Rib (Rib Eye steaks).

2.  Look for a roast that is as close to an even thickness from one end to the other as you can find.  Visualize cutting it into steaks.  If you can only get 3 or 4 steaks cut before the roast gets thin looking, pick another one.  (this only pertains to a tenderloin)

4.  Cutting your own steaks from a whole roast will always be cheaper than buying them pre-cut.  But if you buy the roasts when they're on sale you'll save even more money!  Yay!  I usually wait until my local grocery store or Costco has Tenderloin roasts for half price then I buy at least 3 and turn 1 into a 2 smaller roasts and the rest into steaks.  Just after I shot this video my grocery store had tenderloins on sale and I did a few more roasts.  These tenderloin steaks ended up costing me $5 each.

5.  Always cut and freeze your roasts the day you buy them.  That way when you go to pull them out of the freezer to cook, they'll be as fresh as they day you bought them.  Not lousy old, been sitting around in the fridge for a few days meat.  Good meat.

6. Use the leftover trimmings as either stewing beef, stir fry meat or just grill up the irregular chunks and eat em. That's what I did. I even grilled some of the stuff I'd cut up for stewing beef. Little cubes of seared deliciousness. They'd be GREAT appetizers. All they need is a bit of spice and one of those cool toothpicks with the squiggly cellophane on the end. I love those toothpicks.

Happy butchering! (or Bitchering depending on your mood) Happy money saving! Happy eating. 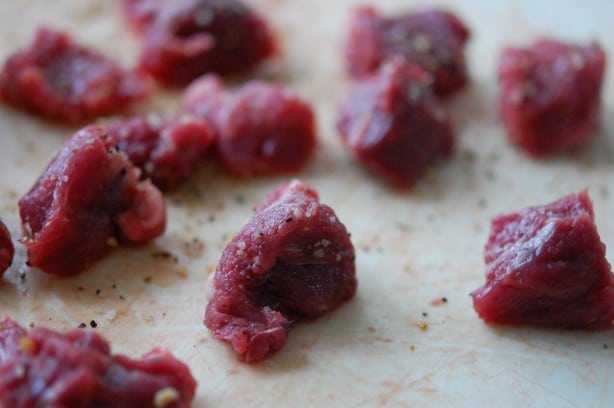