Home » HOME stuff » Decorating » So I Ripped Up My Pine Floors on a Whim. As One Does.

So I Ripped Up My Pine Floors on a Whim. As One Does.

Part of the fun of living in a heritage house is the fact that there’s always something new and weird to discover. Sometimes it’s a 180 year old brick wall behind the drywall and sometimes it’s a gigantic nest of malformed centipedes in the rubble basement.  Last week for me, the discovery was not one, but TWO 100 year old floors beneath my current pine floor.  Here’s how I found out that little bit of information (it involves me being mental) … 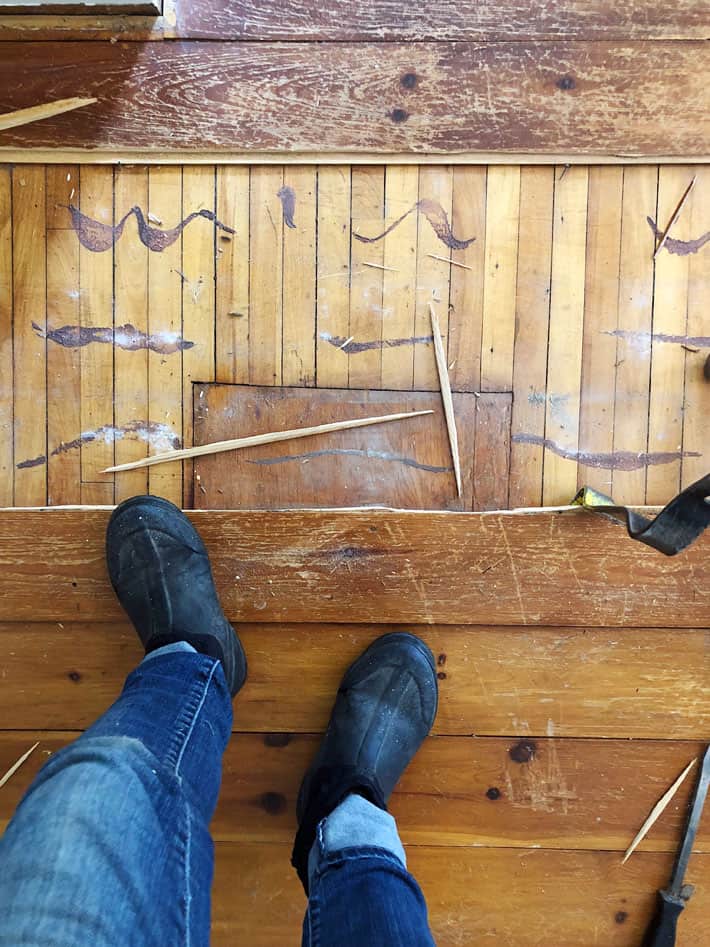 I sat quietly on my living room sectional a few mornings ago, a coffee in one hand, a phone in the other.  I was talking to my sister Pink Tool Belt.  All I can remember from the conversation is her saying “I’d rip that floor up“.  I have zero idea of how we got to that point in the conversation.

Was I talking about my foyer floor?  I didn’t think I was.  I’m pretty sure I was talking about how the curve of spacetime intersects the event horizon of black holes.  I mean, I usually am. 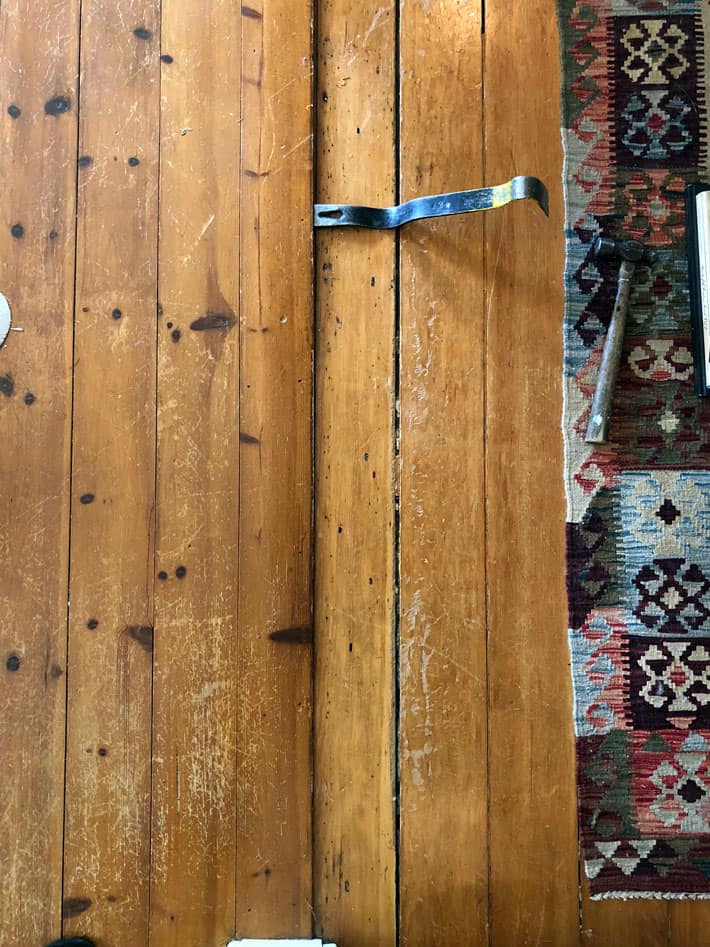 The next thing I knew I was foaming at the mouth (that’s a dramatic way of saying brushing my teeth) and then running down to the basement to grab the nearest pry bar. I walked that pry bar straight into my living room and popped up a piece of my foyer floor. 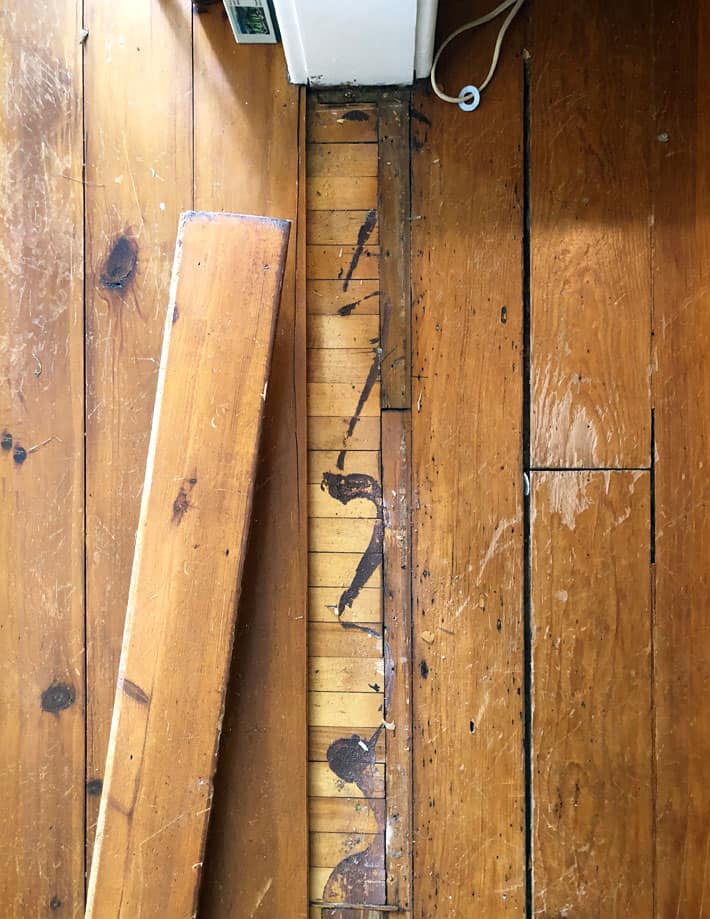 Just one piece.  Only to see what’s underneath.

Let me step back a bit and explain a few things.

*** note – since writing this post I’ve had a floor guy come in to price having my floors sanded and he said he’s seen very old farmhouses with the same floors as my old floors, so they could very well be original to the house ***

Whoever owned the house before me had knotty pine flooring installed in the foyer for some reason.  I’m guessing they did it because they thought it would match the living room floor.  Or because they were former Hee Haw set decorators.  I’m not sure which.

When I got the floors refinished when I moved in almost 20 years ago I knew nothing about anything.  I had the floors refinished because they were scratched and a disaster.  Then I did what everyone did – I had them coated with a thick coat of polyurethane. This did two things. It brought out the absurdly orange colour of the pine floors and it created a surface that would show marks and scratches if you just looked at it sideways.  Or dragged a 350 lb buffet across it. 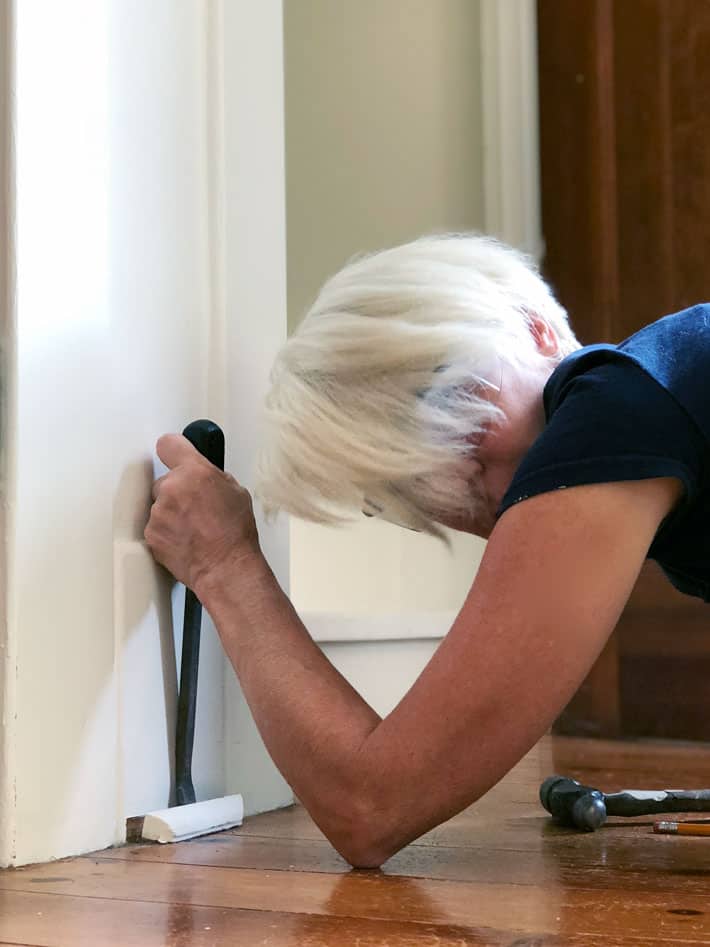 So the other morning when I lifted up that one piece of knotty pine I really tried to convince myself I was only looking to see what was under it.

I’d put the piece back.

Exactly 37 seconds later I had brought all my tools upstairs, wedged my feet into work boots and was maniacally prying quarter round off while singing a song with lots of swear words in it directed squarely at my sister.

57 seconds later I was here. 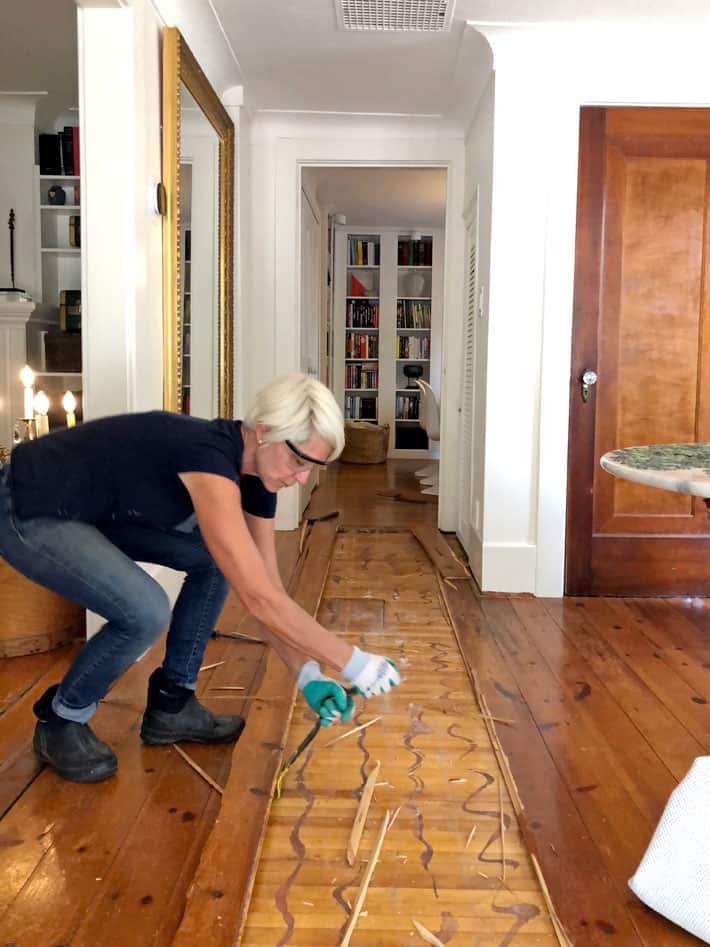 Just to see. Have a bit of a better look. 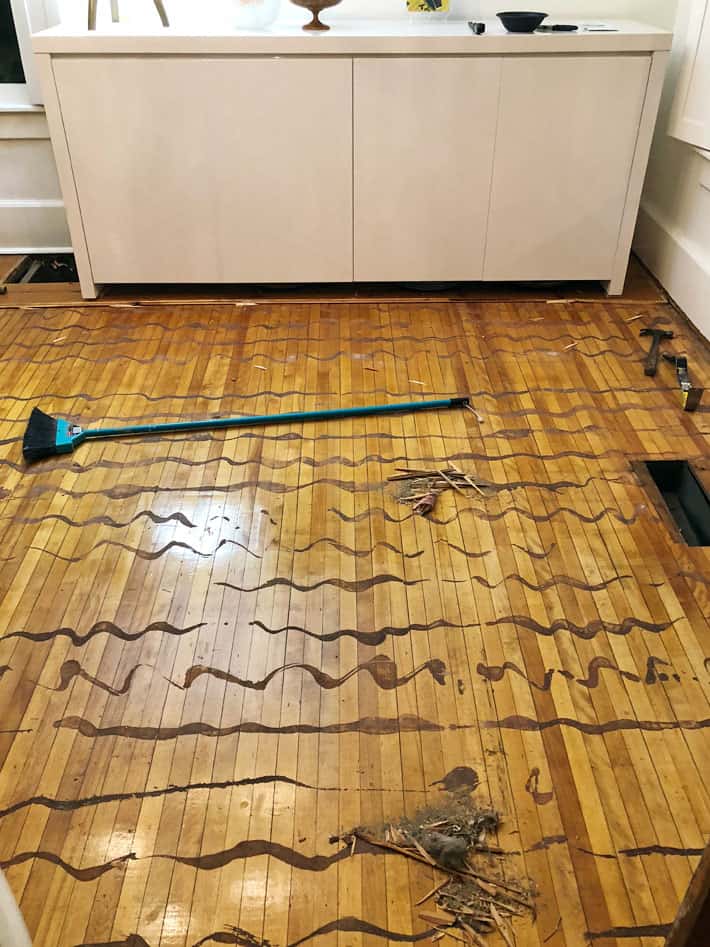 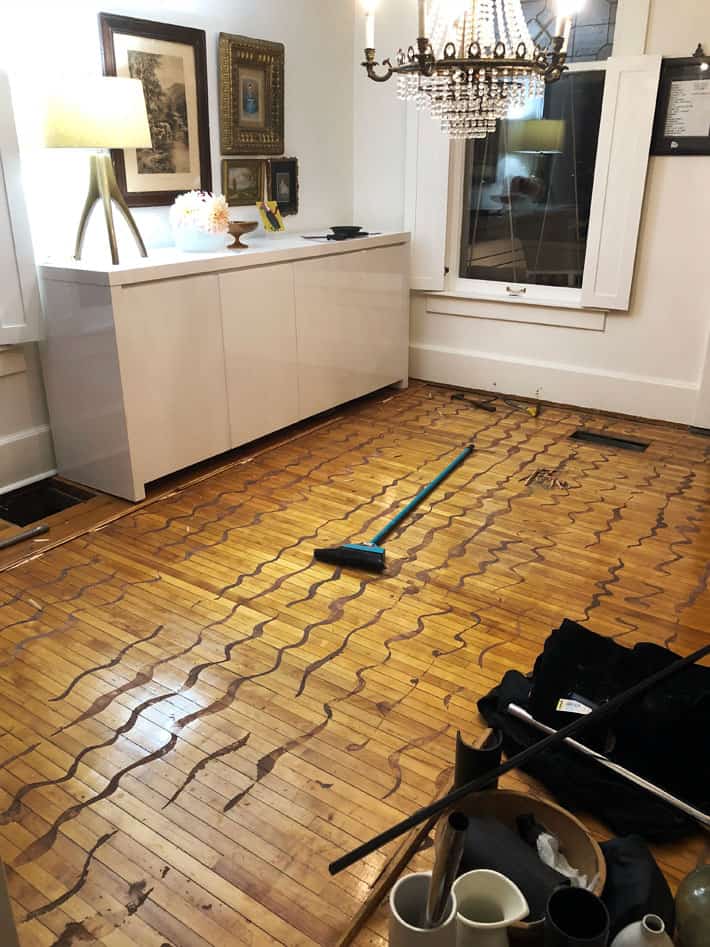 At this point I wondered if I could just leave the floor like this.  If anyone would notice.  I still had about 3 knotty pine boards that were underneath the buffet. Surely those 3 boards are what people would notice when they walked into the room – not the strip flooring covered with sperm squiggles of glue. 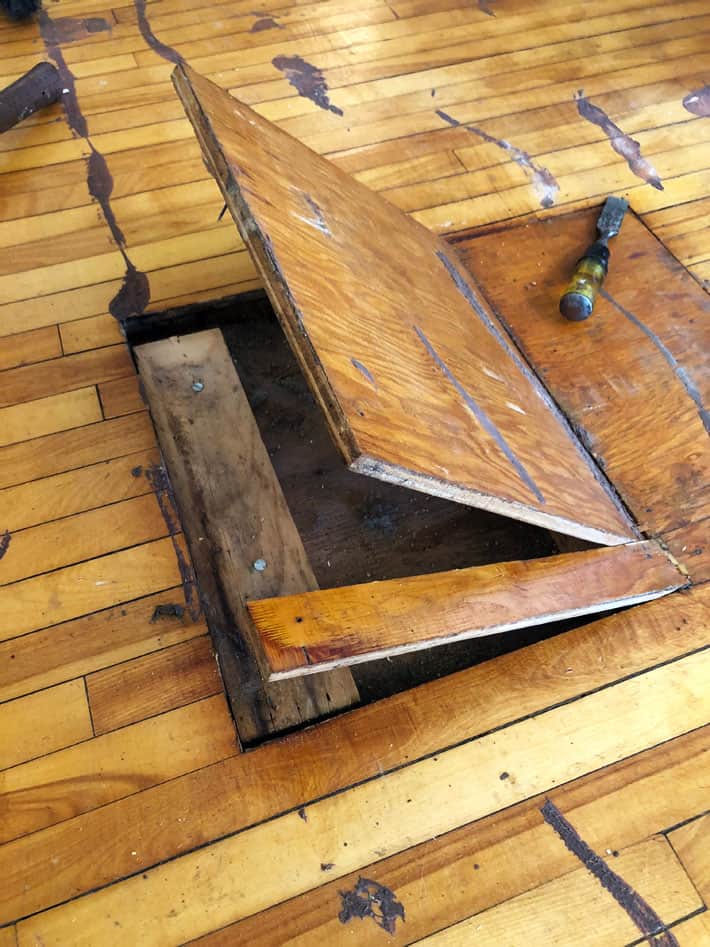 The floor is beautiful.  It’s an antique maple (?) strip flooring that’s in perfect condition.  You know, other than the big hole in the centre of it. To be fair, it wasn’t a hole, but rather a hole that had been covered with plywood a billion years ago.

But I could deal with that.  It could be patched a bit better. And I wouldn’t mind a patch in the middle of the floor. It adds to the character of the house and is a tribute to the years it has stood.

Huh.  I wonder what’s under that plywood anyway. 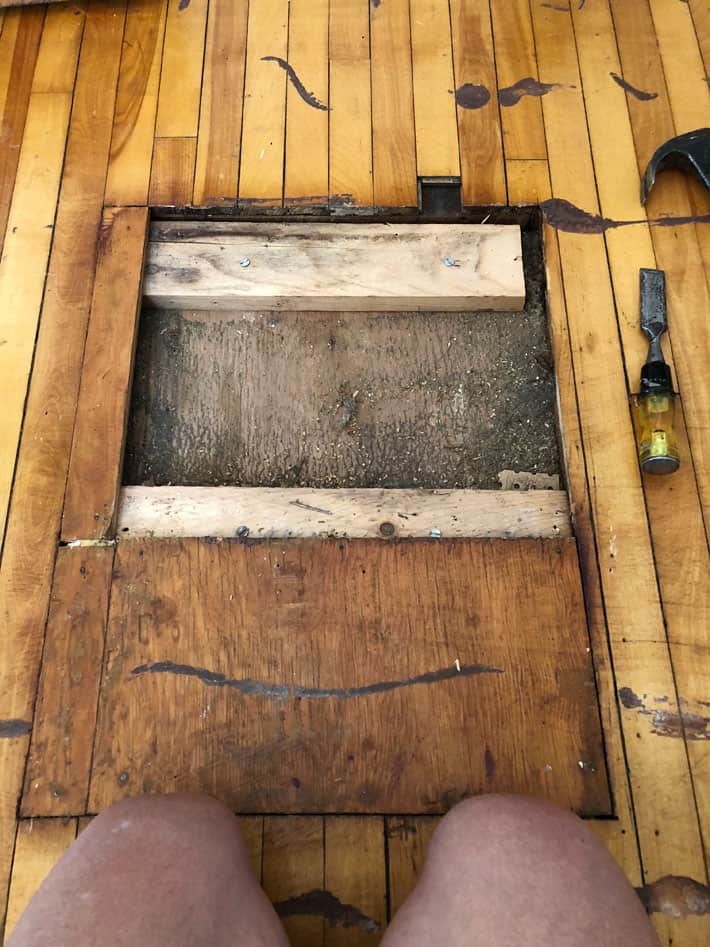 If you had told me the house, all of its contents, myself and my cat would all sink into the aforementioned black hole if I lifted that plywood, I would have turned my bum in your direction, tooted, and then ripped up the plywood.

Which of course is exactly what I did. 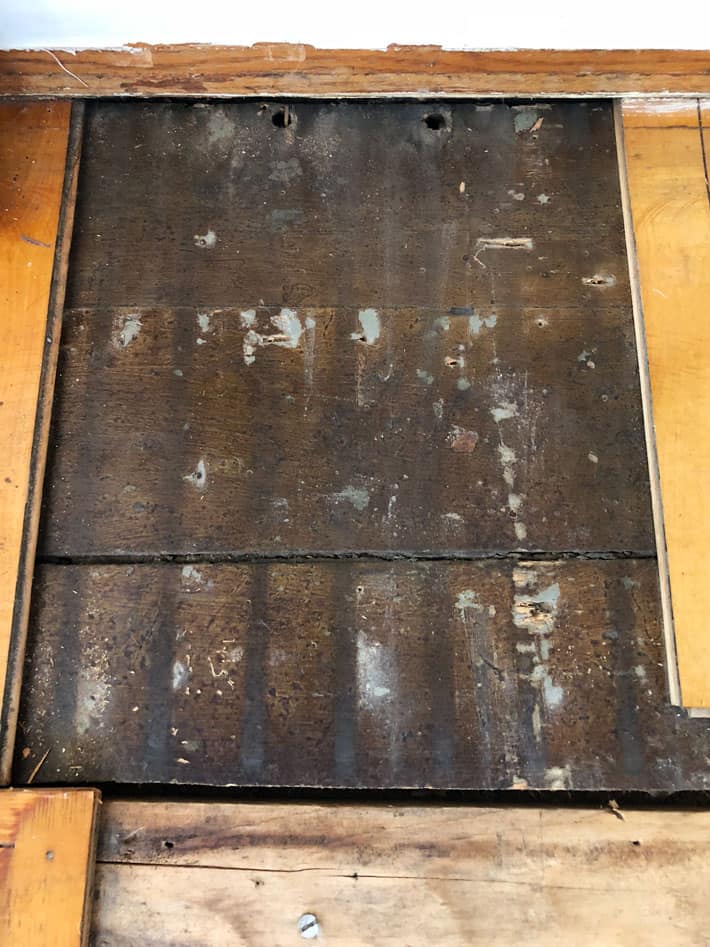 Under that plywood and a few of the pieces of maple is the almost  original floor to the house.  The same as what’s in the living room.

The floor was painted brown and underneath that it was painted blue. I could see that with my bare eyes.  If I were to just sand a little bit of that floor I’d be able to see what it looked like under all that paint.

So I sanded the pine.

And a bit of the maple next to it. 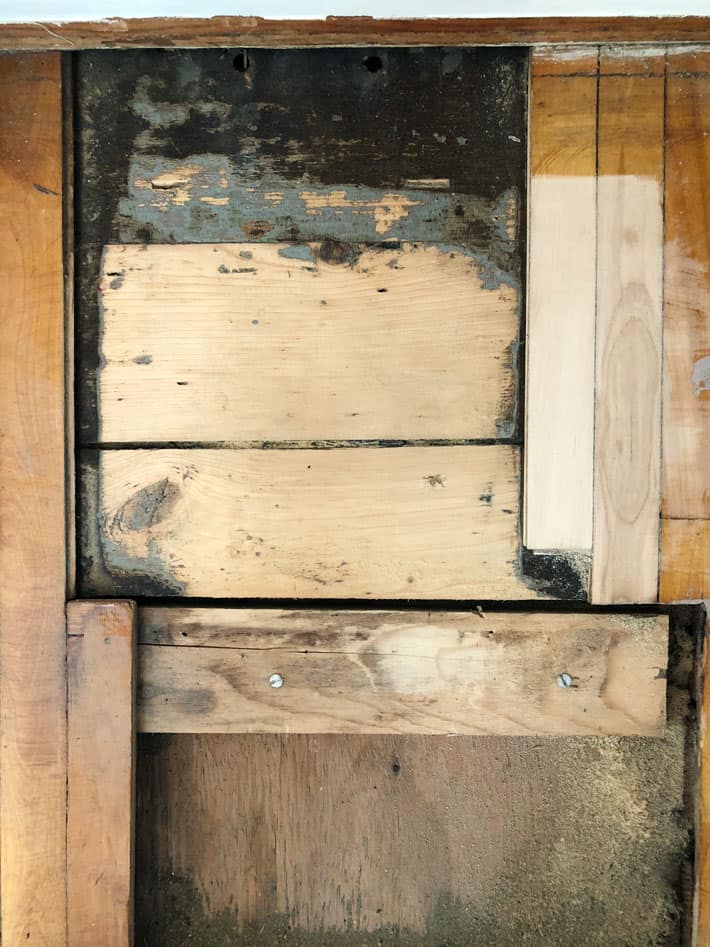 You can see the pine has an apricot/orange undertone that turns full on pumpkin when you put any finish on it.  The maple is clearer.  WAY less orange undertones. 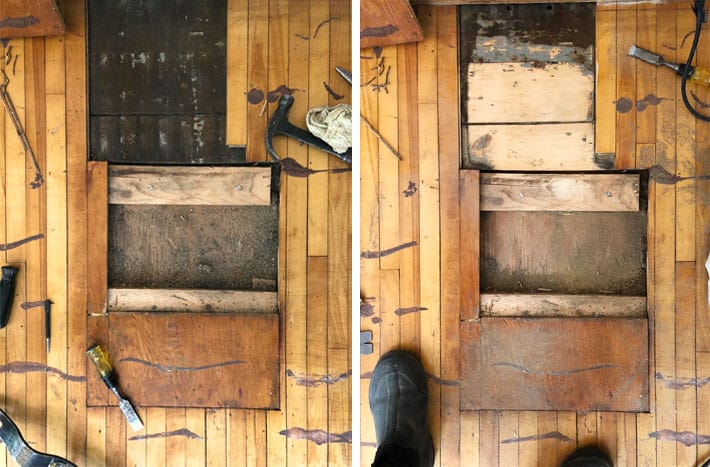 I ran down into my basement and looked up.  The ceiling of my basement is the underside of my original floors so I can see if there are holes, or big gaps or anything scary.  Other than the “hole” there didn’t seem to be any other issues with the floor.

And so now I sit and stare at the flooring.  Day and night.  Wondering what to do.

Do I rip up the maple to get to the older pine that matches the living room? 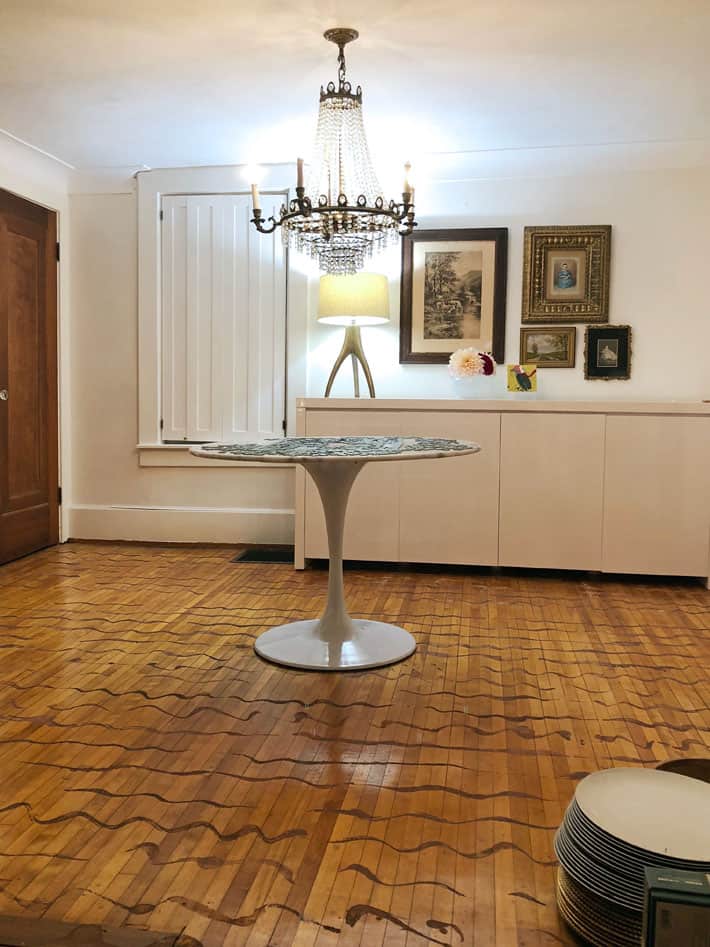 I talked about this as it was happening on my Instagram account. The amount of people who said to immediately rip up the maple flooring to see what was underneath was an alarming reminder of how few people have actually ripped up parts of their house.

Anyone who had ripped up a floor or parts of a house was a bit more judicious.

For now this is how I’ll be living with my floors.  Because I can’t decide what to do.  I know they’ll all be refinished, I know I’m going to leave the floors raw (with either a soap or a wax finish probably) and I know I want to put something on them to combat the orange (wood lye).

The only problem is, I don’t know which floors I want to do it on.

→Follow me on Instagram where you can see me do a lot of this stuff before I blog about it.← 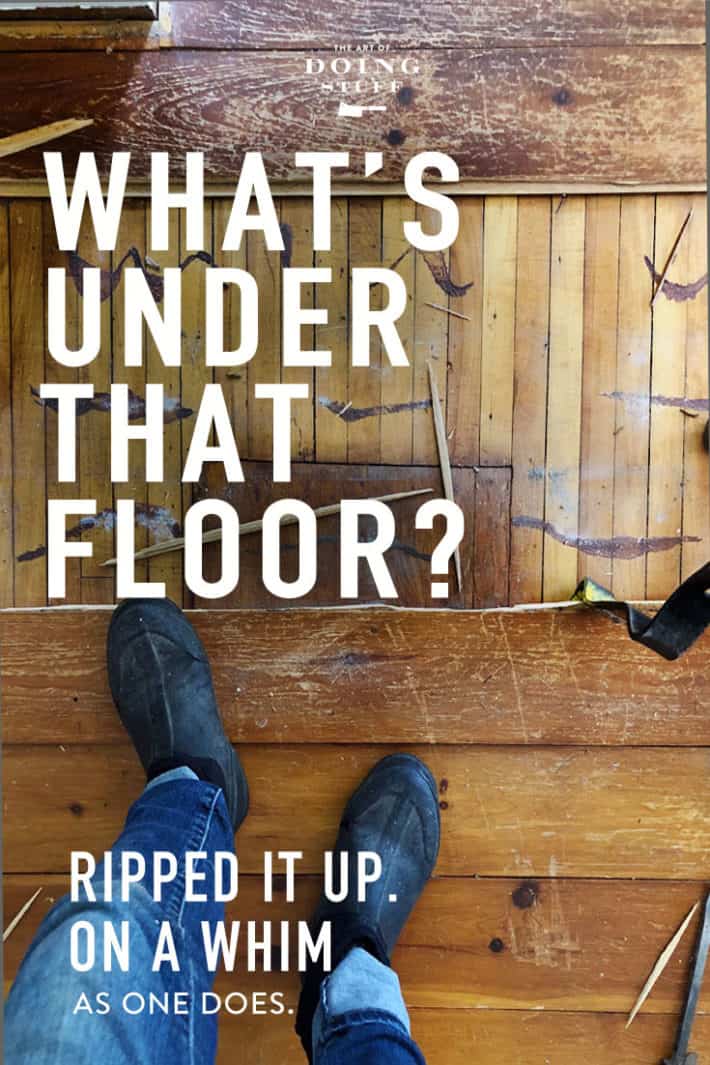