It seems very, very wrong to call this concoction a salad, but history in my family dictates that’s its name.  Marshmallow Salad with canned fruit. Similar to ambrosia but served with the meal not as a dessert.  SO weird, but it’s our Thanksgiving and Easter dinner tradition.

I know a salad made out of marshmallow and canned fruit seems like a joke but this mixture of mini marshmallows, shredded coconut, mandarin oranges, crushed pineapple, maraschino cherries and sour cream (not Cool Whip) is serious stuff on the holiday dinner table.

You’ll note the addition of *sour cream* instead of Cool Whip which makes my recipe super classy.

It’s kind of how I made Brussels sprouts classy (edible) by tossing them in dijon mustard and honey. After deep frying them.

If the thought of mixing marshmallows, fruit and sour cream disgusts you then your tastebuds are far removed from your late 1800’s ancestors . You probably don’t even like jellied eel pie – another 1800’s favourite.

Where did it originate?

However, I’ve found a copy of the entire Dixie Cookery cookbook online through the Library of Congress. The second recipe in the book starts with “Boil a calf’s head”.

The original recorded recipe for Ambrosia is very different from what we refer to as Marshmallow Salad or Ambrosia today. The original Ambrosia recipe was just layers of sweetened grated coconut and pulped oranges served on a saucer. I have no idea what pulped oranges are but I’m guessing it’s easier to do than making the Fricassee of Squirrels found on page 26.

For as long as I can remember, my family has served Marshmallow Salad at holiday dinners. Sometimes we’d call it Ambrosia, on occasion we’d refer to it it Sour Cream Salad.  Truth is, we really never knew what to call it, other than an embarrassment.

We’re not the fanciest people on earth, but we’re fancy enough to know anything that includes marshmallows should at least be served as a dessert.  We serve it as a side dish.  There it sits on the table, right beside the perfectly respectable green beans and mashed potatoes; a big bowl of marshmallows, fruit and coconut winking, “Here I am, in all my tacky glory.  Caught ya lookin’!”.

If marshmallow salad were a dinner guest, she’d be the sparkly, hooker-with-a heart-of-gold that your Uncle Nick brings to Easter dinner every year. An embarrassing, loud, colourfully dressed dish that you can’t help but love.

Plus it’s sort of understood you don’t talk about either one of them in public.

I’m not sure when it happened, but I’ve taken over the Marshmallow/Sour cream/Ambrosia Salad tradition.  It is now my job to smuggle it out of the house under the cover of ageing Tupperware, to all of our holiday dinners.   If the neighbours ask, I lie and tell them it’s something a little more respectable than marshmallow salad.  Like a 3 bean salad.  Or a shrunken head.

The good news is, this dish now officially has a name in our house.  One year it was dubbed White Trash Salad.   The name stuck quickly like Crazy glue to a hard hat.  Or sparkles to a stripper.

Here’s to strippers, hookers, marshmallows and not caring what other people do or think.  Here’s to … white trash salad.

Add all the ingredients to a bowl.

Then fold everything together.  Cover it up and let set in fridge overnight.

Told ya the coloured marshmallows gave it that added zip.

And I vow here and now, on this very day not to hide this “salad” anymore.  I just don’t have the energy.   I will carry it with my head held high to every family dinner we have.

Because it’s tradition, because it now has a really cool name and most importantly … because I like it.   And even though they may not admit it publicly, so does everyone else.

But making it white and putting it in a cup classes it up a bit. 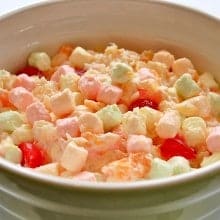 If you’re looking for another dish to horrify your guests with (until they try them) whip up these bacon wraps made from bacon, condensed milk, dijon, cheese and bread. You would NEVER think those ingredients would make up anything even close to delicious but they’re a favourite of everyone who’s tried them.

As an aside to this post, I made the marshmallow fruit salad in these pictures just for taking photos of it for this post. I wasn’t sure what I was going to do with it once I was finished photographing it so I just stuck it in the fridge. I figured out exactly what to do with it at about midnight. 🥄 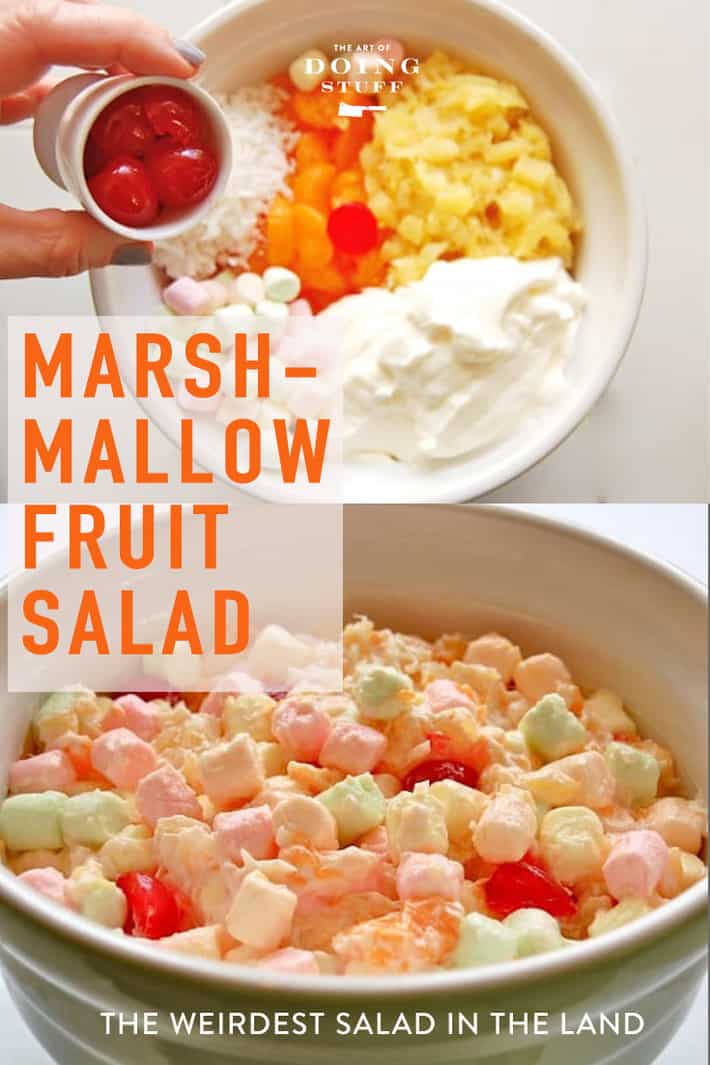