A couple of years ago I saw a picture on the Internet of a dark, dark brown egg. I thought it was a chocolate egg actually, ready and waiting to be dragged through a jar of peanut butter.

But it wasn't. It was from a particular breed of chicken called a Marans.

I have been obsessing over having one of those chickens ever since. For me, half the fun of owning backyard chickens is having eggs that are colours people have never seen before. That and being able to wear a live chicken as a corsage at a moment's notice if need be.

But with a a smallish coop and 4 hens already I couldn't even think of adding another chicken.  Well I could think about it but I couldn't do anything about it.

And then Norma died.

I know.  I'm sorry to shock you.  But it's true.  And that's one of the horrors of owning chickens.  They up and die on you, oftentimes without warning.  It was sad and awful and I cried.  She had a prolapsed vent, which is something chickens who lay big eggs (and Norma's were HUGE) can be prone to.  I know a lot of people just  throw their chickens in the garbage or burn them when they die but I just couldn't do that so I built her a little crate, (O.K., it was a coffin, but saying I built a coffin for my poultry makes me sound like a nutjob)  put her in it and buried her in a safe place.

(Quick note ... when you buy chickens you either buy hatching eggs to hatch them in an incubator yourself, day old chicks, or pullets. Pullets are 5 month (or so) old hens that have just started laying. Getting a pullet is great because you don't have to go through the bother or raising chicks which can be time consuming, but not a lot of people sell pullets. Chicks are much easier to come by, especially for the rarer breeds.)

Marans are a rare (in North America) French heritage breed. They come in a variety of recognized colours with the Black Copper Marans being the most popular.

Now a bit about those dark eggs. People take them very seriously. There's even a colour chart. 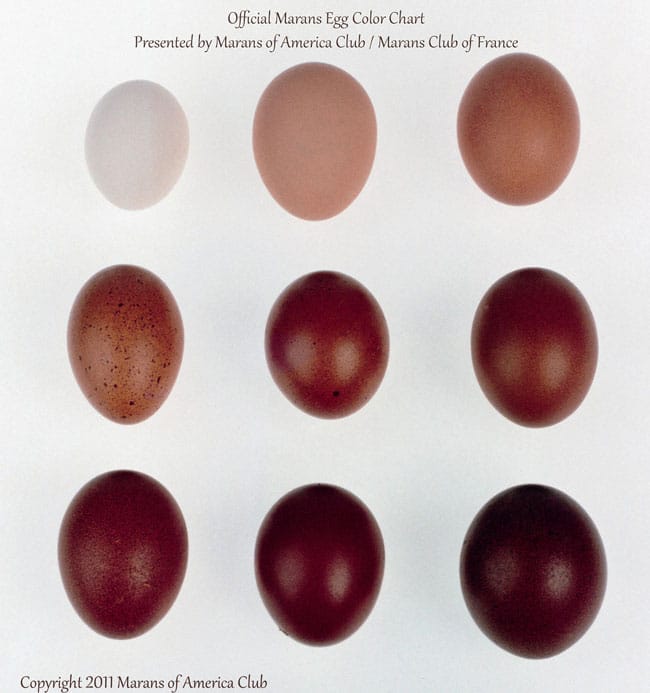 The egg colour produced by the Marans hen has to be a #4 on the chart or darker to even be recognized as a Marans.

Anything in the 8 or 9 range is very rare and more of a mistake than anything. Hens are most likely to lay this colour of egg in the beginning of their laying cycle and right after a moult. Then the eggs will consistently get lighter, but they can't get any lighter than a #4.

People breed Marans with the goal of getting the darkest eggs possible. Which make sense, because even though they're supposed to be very nice, gentle birds, it's the eggs we're all after.

If you Google Marans eggs you see egg cartons filled with dark, DARK eggs, but that isn't the norm and if that's what you're hoping for you'll likely be disappointed.  It really bugs me actually that people post those pictures but don't put the disclaimer that these eggs are rare and won't always look like that.  Kind of like when people post only the the *really* good pictures of themselves having great times on Twitter.  Really?  Where's the picture of you where your lazy eye is noticeable and your kid has thrown up on your hair?

I strapped on my typing fingers, headed over to Kijiji and started my search. I just realized I'm already lieing to you.

Kijiji WASN'T where my search began. It began at a local farm that I discovered had Marans. So I sent them an email. Apparently they aren't email people because they never responded. So I drove past the farm. Apparently they aren't real farmers because they weren't outside. A real farmer is outside from morning until night. They wear overalls, checked shirts and chew straw. Sometimes they have their hands in their pockets and stare quizzically at big broken pieces of machinery.

I saw none of this as I sped past the farm.

So from there I went to a farmer friend who knew someone else who had Marans. This also led nowhere. I'm now starting to think that the Marans breed is the unicorn of chicken breeds. But I knew they were real. I'd seen pictures of them. Mind you I've also seen pictures of unicorns.

O.K., so it was at THIS point that I headed over to Kijiji. I found several people selling them, but they seemed sketchy to me for some reason. I was basing my judgement on how they wrote their post, what they had to say about their hens and whether or not they spelled Marans correctly. If they called their chicken a "Maran", they were scratched off my list of potentials. There's supposed to be an "S" on the end of Marans.

My list quickly got whittled down to one breeder. A woman who was fairly close, just a few towns over from me. She was VERY into chicken breeding and had just listed a first spring hatching of Black Copper Marans. I was at the point in my search where I was just kind of browsing around and suddenly I was in a position where I had to make a decision. It was like browsing on the MLS and finding your dream home even though you had no real intentions of moving.

I emailed her, she emailed me, I emailed her back, I himmed and hawed. Then the chickens were gone. Sold. Shit.

You might be wondering why I didn't just snap em up like a pair of half price shoes. Well, the truth is buying a chick isn't quite that easy. For one thing you can't buy just one chick. You have to buy at least two and 3 or 4 are better. That's because chicks are flock creatures by nature and could die of loneliness if there's only one of them. They need each other for protection, warmth and companionship.

The other problem was, Black Copper Marans are very difficult to sex. So if you get one chick it could very well be a rooster, which aren't known for their fantastic egg laying ability. Plus if you get a rooster, you have to figure out a way to get RID of the rooster. If you get 3 or 4 chicks the chances of you getting a hen are greater and if one happens to die, you still have a few left.

Since I only needed one hen, the prospect of suddenly having to raise several of them kind of made my head explode and I just couldn't commit.

A month or so went by and I couldn't stop thinking about those chicks. So on a whim I emailed the woman back and asked if she happened to hatch anymore unicorn birds.

She said "As a matter of fact, yes". She had some in her incubator right now that would be ready in a few days. I said I'd take all the Marans she had. I now had a plan.

I have a couple of friends who have chickens.  I contacted both of them to see if they'd be interested in a hen once I raised them.  They both said yes.  So if I have too many hens in my group of chicks, I know they have good homes to go to.  As far as the roosters go, if I get any of those ,they are a rare and in demand enough breed that I'll have no trouble selling them on Kijiji. 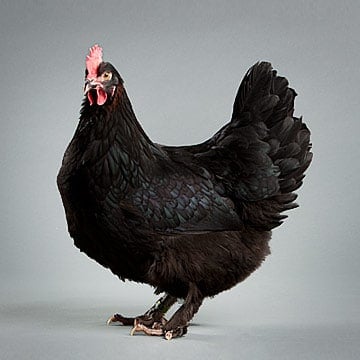 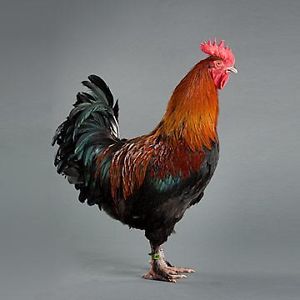 In terms of how they look the Black Copper Marans is well ... black. They're distinguished as Black "Copper" Marans by the copper ring around their necks of the hen, which you can only barely see in this picture.

The below pictures, which is a rooster, shows how beautifully colourful they are.

The Marans fit my climate ... they were bred originally in a cold damp climate, so they're good in the cold winters of Ontario.

The other distinguishing feature in the Marans is their feathered legs. Which I love. Which is ironic, because when things begin sprouting out of my own legs I hate it. Their temperament is nice and not aggressive like a Rhode Island Red can be and they lay fairly regularly but not nearly as much as the more common breeds that are bred specifically for laying a lot of eggs.

There's one of me, and 4 chickens laying eggs. I can only eat so many pavlovas, so I'm O.K. with this particular breed only laying 3 or 4 eggs a week as opposed to 5 or 6.

The one thing no one tells you when you are looking to buy a Marans is this ... while most breeds start to lay eggs between 4 and 6 months of age, Marans have been known to wait until they're 8 or 9 months old. Of course there are exceptions.

So now that you know what chicken I chose you can go on with your day.

Tomorrow, I will have 20 photos of the chicks looking impossibly cute. This cute phase only lasts a couple of weeks before they hit the gawky teenage phase.  At which point, I will have 20 more photos for you.  Perhaps one of them will have a unicorn horn strapped to her head.