It happened. My 4 year old English Cottage Garden has moved out of its toddler years and is finally growing up.

Funny how doing that one little thing made all the difference in the world. It’s SORCERY I tell you. Count on me to ALWAYS bring you the latest trends and revelations in gardening.

Plants that self seed.

The other reason my garden has done so well this spring is because of the mild winter we had. Snapdragons which normally self seed here, didn’t die back at all so they’re already over 2 feet high and covered with flowers.

Alyssum that was scatter planted last year has self seeded and in a couple of more weeks should be a carpet of honey scented purple and white blooms.

People always tell me they have trouble growing cilantro. Here’s why that is – Cilantro likes to be ignored. It also likes to grow in a mass. One cilantro plant is a bit sad and lonely. Plant at least 3 or 4 of them in a group. If you can ignore them enough that they live, ignore them some more. If you do that, they’ll go to seed, and drop those seeds everywhere.

Amaranth will self seed like nothing I’ve ever seen before if you leave it. I mean THOUSANDS of Amaranth seedlings will pop up everywhere in the spring.

These may look like sad little Amaranth seedlings, but what they actually are, are sad little …. O.K., never mind that’s exactly what they are now that I think of it. BUT – look at how big these tiny little things will get by the end of the summer.

This Hot Biscuits Amaranth from Floret, (also sold at William Dam Seeds in Canada) is what stops everyone who walks past my house. Seriously. I’ve been standing there totally naked beside it and seen people trip over themselves trying to get a better look at it and figure out what it is.

In the picture above you can see the tall red cockscomb at the front of the fence. It, along with everything else in my front wall self seeds like crazy.

I split a peony bush 2 years ago and planted 2 more new ones but last year I got almost nothing from them. This year? They’re busting out.

So even though peonies don’t self seed, you CAN split them and double your stock.

This is supposed to be a Shirley Temple peony, but it doesn’t really look like it to me. But that could just be the menopause talking.

Frankly my kale looks more like Shirley Temple than the peony does. Slide the bar to compare this to what my kale looked like in the fall last year.

Yes, this is indeed kale! Black lacinato kale to be exact. It’s hard to recognize under all those seed pods.

I’ve let it go to seed and earlier in the spring it was covered in yellow flowers, kind of like forsythia. Now it’s COVERED in seed pods which I’ll be sending to my Art of FUN Stuff members this year.

The seed pods aren’t quite ready to pull off. I’d like them to start drying a bit naturally on the plant before I cut all the stems off and hang them to dry.

At that point I can finally chop down (yes chop down) the kale and plant new baby kales.

WHY YES YOU CAN EAT KALE SEED PODS.

In fact I grab a few and eat them whenever I walk past. Even though I don’t like kale. But the pods taste like kale only better for some reason. They’re perfect for throwing on top of a salad like a crouton. Only less delicious and buttery and good than a crouton. Otherwise exactly the same.

The apple trees are also enormous with whippy branches that extend past the entrance to my porch so every time I walk onto my porch they brush past me so I pretend I’m going through a car wash (made of apple branches.)

June 20th (the summer solstice) is the day the espalier branches get cut back. You can read this post on how to prune your espalier apple trees properly if you missed it.

Normally I’d pinch back the apples to only 1 or 2 per cluster, but apple trees can have a tendency to be prolific one year and then go on more of a work to rule schedule the next year. You get some apples, but not nearly as many. So I figure with only a few clusters of apples, I should be O.K. to let them all develop.

And then get eaten by my nemesis – “Scruffy Black Squirrel with a hint of mange”.

Another new addition to the front garden from the same time as the peonies are these purple flowering catmint plants which need to be hacked back every so often to keep them behaving.

And scattered everywhere, are bamboo stakes. Each one of them marks the spot where a dahlia is. Half of my dahlias died last year (see above note about lack of brain and water.) I’ve optimized my sprinkler system, set the timer and did my dahlia dance so I should be good to go for this year.

This year I tagged my dahlias at the top of a bamboo stick instead of low to the ground because those same people who are so enamoured with the amaranth also like to know what type of dahlias I’m hiding behind.

If you need a bit of a reminder, this was the sadness of my English Cottage Garden just 2 years ago.

And this shot was from mid summer. Things were clearly pathetic. But it’s like when you want to grow your hair – you just have to grin and bear it through the awkward troll phase.

From the side of my house it doesn’t seem like there’s a lot going on, but in a couple of weeks when the poppies are done and the peonies have lost every petal, the perennial sweet peas will take over the fence, thick with flowers and the phlox will shoot up, bloom like crazy then die a dramatic death due to powdery mildew.

That’s a cabbage moth you see on my poppy. He’s part of the same brothership as the mangey squirrel. They do a lot of frolicking and phony glad-handing to distract you from the fact that they’re actually part of a worldwide gang of garden pirates.

Your next English Cottage Garden update will take place in the fall when we’ll all find out whether my pausing brain really absorbed the concept of watering.

That’s not the saying is it? It seems wrong. Don’t tell me. I’ll figure it out. 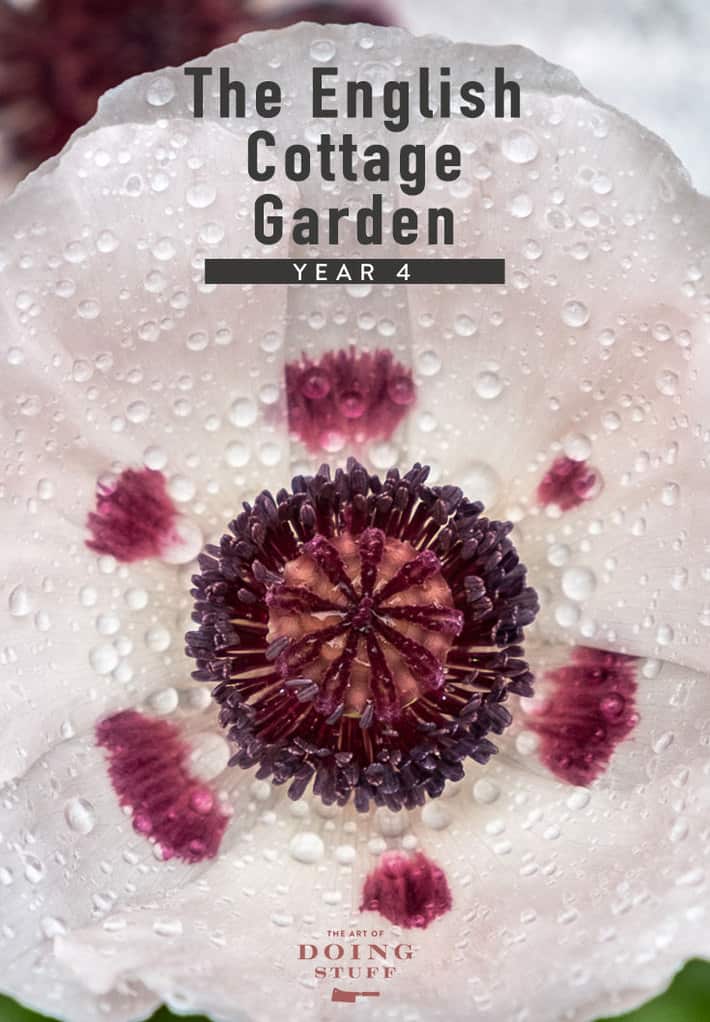