Every so often readers send me stories of links they've found on the Internet they think I'll enjoy.

I always take a look at them.  Sometimes they're funny, sometimes I love them, sometimes I think Oh my God.  Do you really think I'd like that, you crazy person?
Last week I got one such email.  The funny kind.   Not the crazy person kind.

I beg of you.  If you only click on ONE link this whole year make it this one. 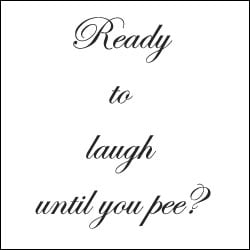 It's a love story about a girl, a first date and a fart.   Then come back here ...Read this Fart Story!

I'll give you a moment to blot your running nose and wipe away your tears.  GET AWAY FROM THE DOOR!!!

I now have a craving to hear ridiculous date stories.  That's where you come in.

Have a great date story?  Tell me.  Tell me now.  What is the most embarrassing thing to ever happen to you on a date?

Don't worry.  You can divulge.  I won't tell a single, solitary, soul.