My sister Pam spent much of our trip to Thailand talking about something very specific she wanted to do.

We all had things we wanted to do and everyone tried to accommodate everyone else. Pam and I wanted to take a half day Thai cooking course so my other sister and Betty came along. Pink tool belt sister loves jewellery so we spent a few hours looking at jewellery in gold markets and shops. Betty likes to play on her iPad, so we spent any down time watching her creep people on Facebook.

Throughout it all,  Pam rattled on about this thing she wanted to do.  Which meant we'd all be doing it.

When the day finally came that Pam got to do this thing she'd been hoping for, dreaming about, I thought she might burst with excitement.

The morning of "the event" she was walking on air, talking about how great it was going to be.  Counting down the minutes until we got to go.  Just look at the glee on her face.  She's like a child on Christmas morning. 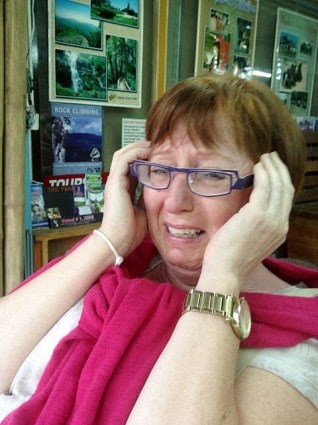 A child who has been very bad. Bad, bad child. 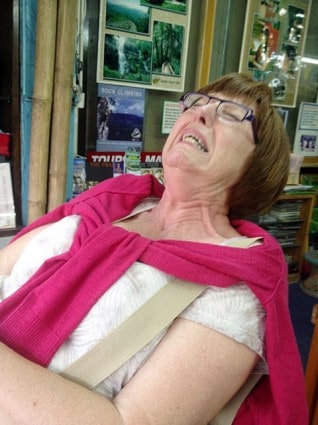 So what was supposed to be a joyous, lifetime ambition realized was in fact, a horrifying, scream inducing ritual normally reserved for nightmares.

What was it that had Pam crying and screaming for her life? 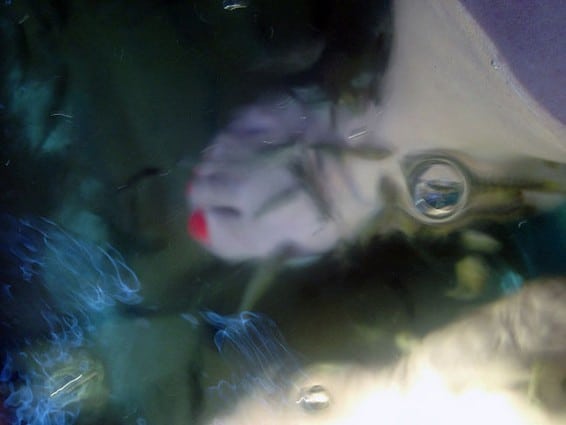 She hated it. She hated it with all her heart. And so did the man sitting next to us. Well he didn't hate the fish pedicure, so much as the screaming loons sitting all around him. 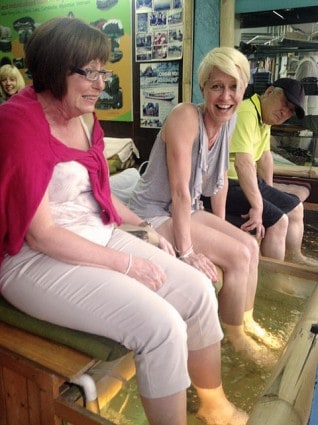 Pam, Pink tool belt and Betty all had very different reactions to having tiny toothless carp eat dead skin cells off of their feet, but they all had one thing in common. They didn't like it.

Pink tool belt sister laughed until she nearly peed herself.

Betty hated it so much she barely put her feet in the water and when she did she was swishing them around at a rapid pace trying to avoid all contact with fish. She was so swishy in fact, that the owner of the spa had to come over and hold her legs still telling her she was going to kill the fish. Betty didn't care. Betty swished.

Me? It didn't bother me. At all. I was more horrified by the whack job behaviour of my family than by the suckling fish.

We in fact caused such a commotion that no less than 3 people stopped in front of the window we could be seen through and took our picture.  They thought we were hilarious.

In fact a girl passing by on a Tuk Tuk nearly tumbled out the back she was laughing and pointing at us with such vigour.  Joke's on her.  I recognized that Tuk Tuk driver from a day earlier and he was going to overcharge her no matter where it was she was going.  Sucker. 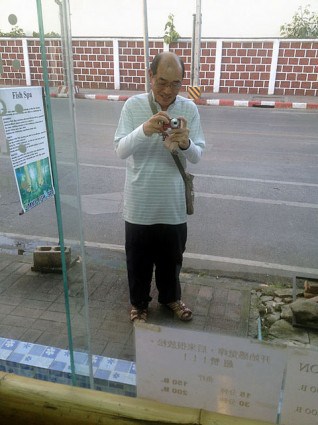 This gentleman outside the window made the universal "can I take your picture" sign to which Pam (fed up by the relentless sucking on her toes and gawking), replied with another universal hand sign.

Luckily I don't think the gentleman spoke sign language and took her gesture to mean "one picture".

After 15 minutes we all pulled our feet out,  then had them hand dried by the spa owner and were gently nudged towards the door.  It was supposed to be a 30 minute treatment but the owner decided 15 minutes was just fine for us for some reason.

So that was Pam's wish list taken care of.  I was looking forward to telling her about mine.

Which of course was sushi.